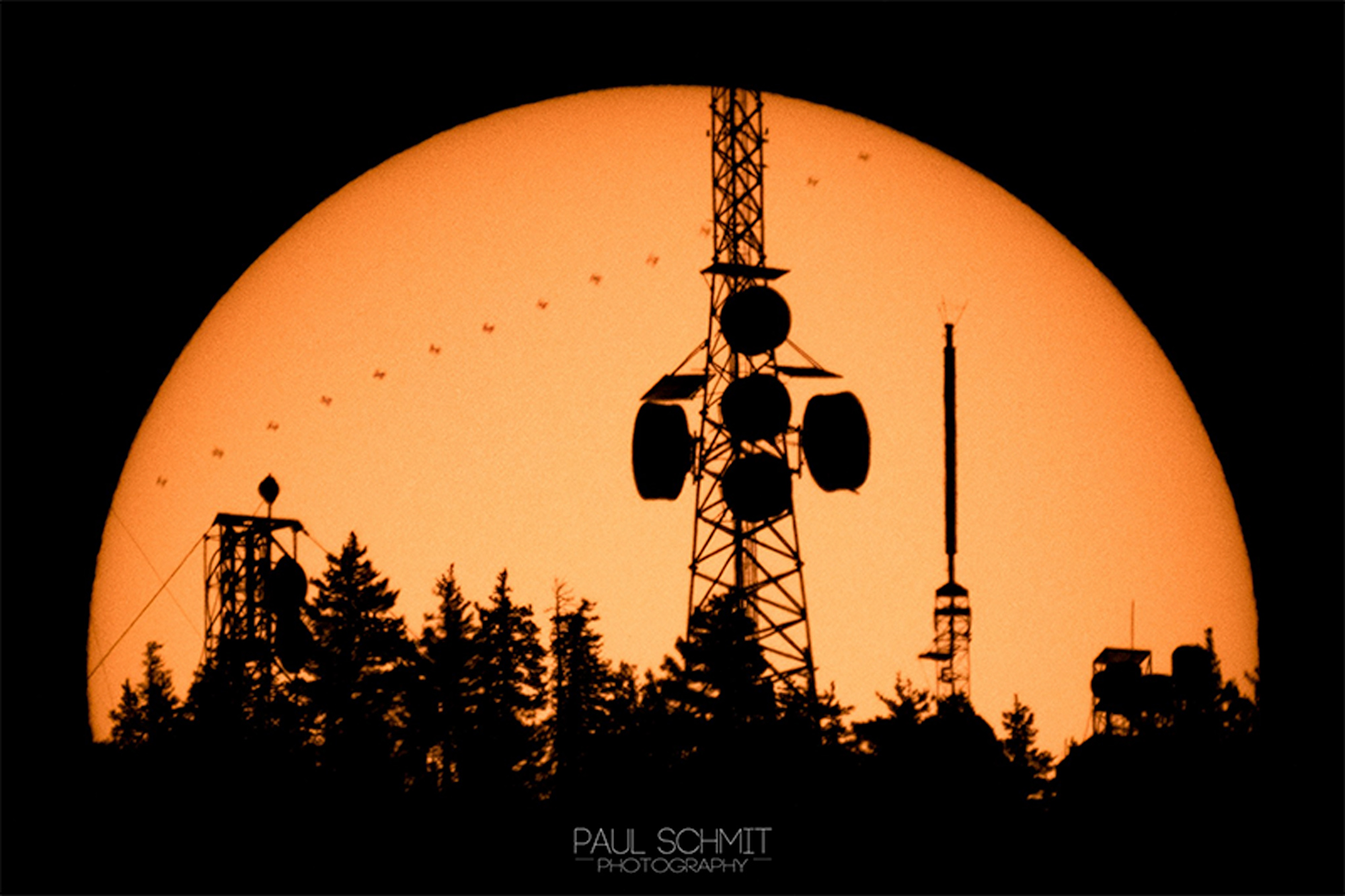 You Won’t Believe The Story Behind This Incredible Astrophotography Shot

Photographer, Paul Schmit is no stranger to capturing truly breathtaking landscape and astrophotography images. But a few days ago, he captured what he said was “the most difficult astro-landscape shot I’ve ever planned and executed.”

The shot is nothing short of spectacular! It shows the International Space Station transiting in front of a few radio towers amongst the tall, mountain pines. The photo apparently took weeks to plan, but Schmit said he came so close to missing it!

An Astrophotography Shot Weeks in the Making

Schmit first shared the story behind this amazing photo on Facebook, where he told his followers just why THIS photo was so special to him. “For over a year, I’ve been waiting for an opportunity to capture the International Space Station moving across the face of the sun as it rises over a landscape,” Paul wrote. “This turns out to be an immensely challenging task, requiring that the ISS cross in front of the sun far enough from my vantage point so that its apparent elevation is relatively low in the sky (then allowing for a landscape element); plus, the ISS shadow can’t just be low in the sky, it also must pass over a suitable, well-positioned landscape element; plus, there must be a way to get to the exact location that will afford a simultaneous view of sunrise over that landscape element (~2 minute event) and the ISS transit (~1 second event).”

"Space Station at Sunrise"TL;DR: This shot was hard…*very hard.* I nearly missed it, despite weeks of planning, a…

“I’ve been trying to push the limits of what’s possible in other forms of astrolandscape photography as well, particularly deep-sky/telephoto astrolandscapes and extreme time-blended landscapes, to name a couple of my recent favorite genres. My shot, “Galaxyset,” generated such a stir in the astrophotography community (suggestions of all kinds of fakery) that I felt compelled to write up a tutorial on my methods on my website to dispel some myths and see if I could inspire others to attempt their own shots.”

Through all of his hard work in planning to capture this incredible astrophotography shot, Paul says he almost missed the chance. With a shot like this, any small deviation from the plan can result in catastrophe! That’s not even to mention that software like The Photographer’s Ephemeris and PlanIt! Can be incredibly fickle sometimes, resulting in a lost shot.

“Tiny errors in perspective (~0.1 degrees) caused by inaccuracies in the topographical mapping software could make or break a shot,” Paul explained. He was smart enough to do a test run the day before, and he was glad that he did. “Very small errors in the software’s landscape rendering led to the sun rising ~1 minute later than expected, signifying a mere 0.2-degree error in simulated perspective, but enough of an error that I would have missed the transit while waiting for the sun to rise.”

Paul tried to compensate for the error the next day, but he actually overcompensated. He immediately had to reposition, or he would have missed the shot altogether!

“I quickly slid my telescope/camera off its sturdy mount, tucked it under my arm, and ran 40 feet down the hillside, chasing the shadow of the mountain as it crept downhill. With only 45 seconds to go, my dad shouting out the times to me, I laid on my back, propped the telescope on my knees, and frantically scanned back and forth trying to find the sun in my LCD screen.”

Think for a moment about how frantic of a shot that truly was. There’s Paul, laying down on his back at sunrise, scope propped up on his knees. He’s scrambling to hold up his Nikon D500 camera with 2000mm FF-equivalent lens. He’s got his father shouting out the times at him with 45 seconds left to go. And just at the last second, Paul fires off 10 shots in 1.4 seconds as the ISS transits across the sun.

It’s incredible what photographers can do when facing such immense pressure. And to think, this astrophotography shot almost didn’t happen! “I risked missing the event completely had the sun not suddenly appeared on my LCD screen at just the right moment,” Paul says. “But, with that in mind, I think the final image is much more dramatic…”

In case you’re interested in the EXIF details, Paul’s setup was a Nikon D500 body attached to a 1300mm f/13 Maksutov-Cassegrain telescope with a T-ring adapter. He had a full-aperture solar filter placed across the front objective of my scope. (Normally this equipment is sitting comfortably atop a sturdy equatorial mount, whose worm gears are great for quickly fine tuning compositions at these extreme focal lengths. ?) Exposure settings were 1/2000s shutter speed (to freeze ISS motion and, thankfully, limit blur from camera shake as well!), ISO 3200. Some people are surprised by the high ISO despite shooting directly at the sun. This is caused by the impressive effectiveness of the solar filter, the limited speed of my f/13 optic, and the stringent shutter speed requirements for freezing the ISS motion. He used the same settings to capture the ISS transit of the solar eclipse two years ago in Wyoming, too.

We agree, Paul. Sometimes, the story really does make the shot. If you’d like to see more of the amazing landscape photography Paul captures, check out his website or even follow him on Instagram to see some of the incredible photos Paul has taken over the years.

Have you gone to lengths like this to get a shot? Do you have any incredible Astro-landscape images you’d like to share and discuss? Let us know in the comments below!