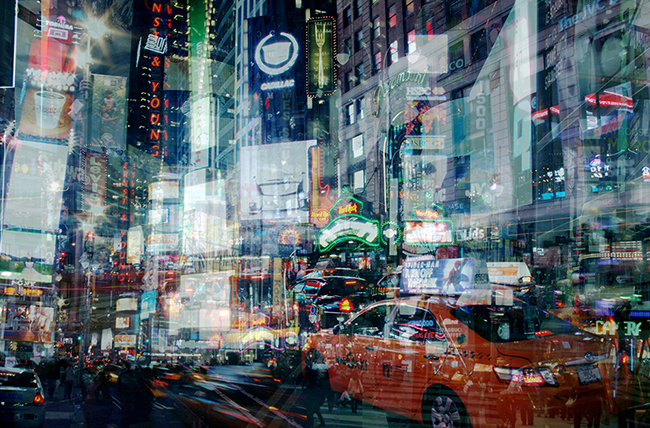 When he was 10 years old, Alessio Trerotoli showed his grandmother photos from a field trip he took with his school. He recalls his grandmother looking at photo after photo of his classmates and the city and stopping to ask him, “But where are you?” Trerotoli says, “In that moment I realized that there wasn’t a picture of me in the entire album because I always was behind the camera. It was the first time I saw myself like a photographer.”

He graduated in 2009 with an art degree and began traveling the world, photographing his adventures. After numerous exhibitions and a book, Trerotoli began his latest project, Urban Melodies. In Urban Melodies, Trerotoli juxtaposes 4-5 images to create “an abstract representation of urban landscapes and contemporary life from modern metropolis like Rome, New York, Paris, Berlin and many others.” Each image is a beautiful clutter of city life, with the hustle and bustle of cars, buildings, and people moving in a frenetic pace.

For him, each image is like a melody because, he explains, like musical notes in a song, each image is beautiful on its own, but stacked with other images, “the new image expresses a richer meaning. All of them, if linked to one another and concatenated in a bigger context, can create something different and, most importantly, something unique.”

Trerotoli is inspired by the stories that are told by the “souls” of streets and buildings. He walks around daily searching for beauty around him and finding beauty in the mundane – a traffic jam or a building in ruins – beauty is everywhere. Using minimal gear, only a Canon camera and a 50mm, he chooses to leave his other lenses at home, because the best gear for a street photographer is “a good pair of shoes.”

You can see more of Alessio Trerotoli’s images here:

CREDITS: Photographs by Alessio Trerotoli are copyrighted and have been used with permission for SLR Lounge. Do not copy, modify or re-post this article or images without express permission from SLR Lounge and the artist.