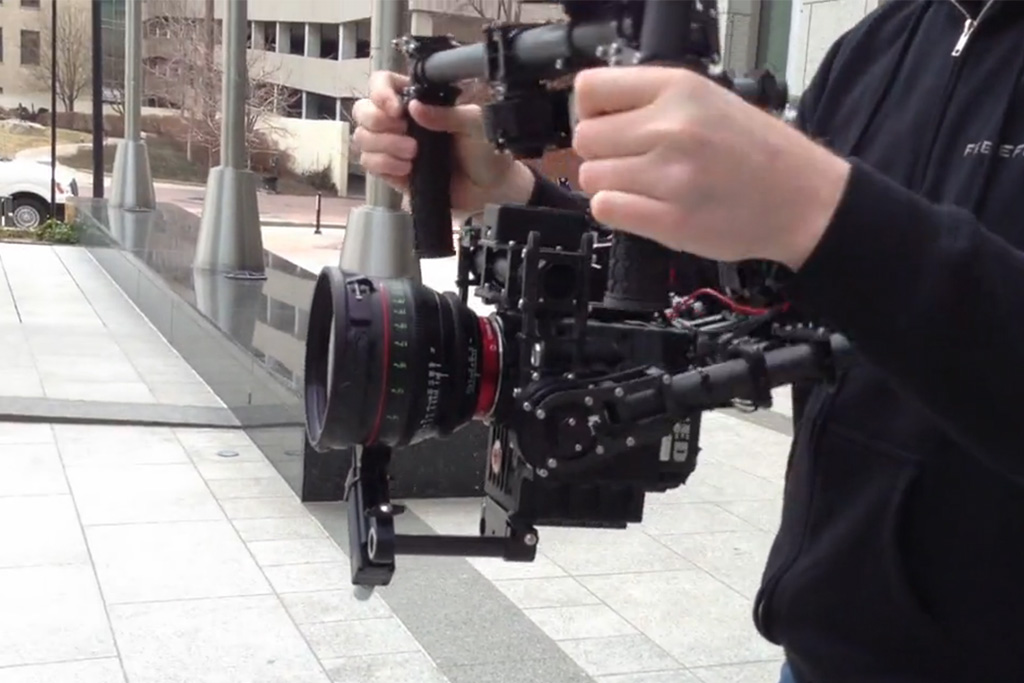 If you ever operated a handheld video camera or an HDSLR, then you know that jerks, vibrations, and shaky motions are the bane of good video recording, especially when the camera operator has to move around as well.

Driven by advanced gyro-stabilizers and accelerometers, the 3.5 lbs MōVI will keep a video camera rock steady even when the camera operator is running or trailing an actor down a set of spiral staircase. Unlike Steadicams and similar stabilizers, MōVI does not use counterweights. the The flexibility of motion available with this stabilizer is unmatched by any stabilizers and can effectively substitute sliders and jib cranes, as well.

As Vincent explained in his blog post, the MōVI can be operated solo or with a second “gimbal” operator who uses a joystick to independently control the camera’s motion on the stabilizer itself. So what does all of this mean?

In short, simply incredible video work potential that will change the way video camera operation is done all the way from the Hollywood blockbuster DP to the Indie film shooter.

To see the potential of the MōVI , have a look at the behind-the-scenes video of Vincent’s short film for MōVI. Every shot was done with a Canon EOS 1D C and a Canon EF Cinema Prime 24mm t/1.5 shot wide open.

As this video has demonstrated, the types of intricate creative shots possible with the MōVI stabilizer are amazing. For someone as accomplished as Vincent to call the stabilizer a game changer is no small matter.

As Vincent said, “If you consider how much we spend on handheld rigs, sliders, jibs (let alone Glidecams/Steadicams etc.) – the price of this device quickly becomes a no-brainer… Another huge factor: it takes quite a bit of time to set up a JIB, let alone weights, crew and skill to operate. The learning curve on this unit is very very fast.” 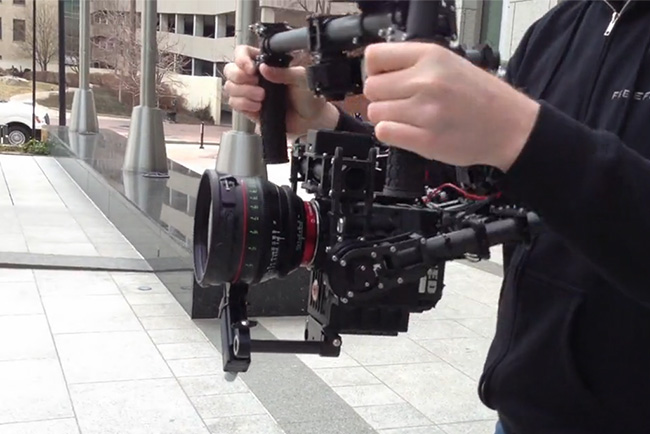 We here at SLR Lounge are super-excited with this new MōVI 3-axis gimbal stabilizer, and it is something we would consider in our film-making arsenal for our studio.

If you are going to NAB, FreeFly Systems will be having live demonstrations of the MōVI at their booth (#C9848).

The Freefly System’s website also has the MōVI M10.

Finally, here is the finished version of the short film that Vincent shot using only the MōVI stabilizer.

Below is an excerpt on Timur Civan’s thoughts of the MōVI stabilizer. Timur was the DP for the MōVI short film:

I dont often get this excited by new equipment, but in this case I think the excitement is well warranted.

Imagine this if you will. The dolley, the stedi-cam, the hand held rig and to some extent the jib were suddenly rendered redundant.

Game changer is not quite the right word. This is liberation.

Being a director of photography, your job is essentially a manager of compromise. There is always something in the way. Some obstacle, whether its price, time, physics, etc….

The Movi, because its so fast to work with, easy to use and mobile; removes the barriers from your work. You can just get the shot you want, how you want it.

It breaks down like this. You have the Rig. The rig powers the focus motors, the camera, and the wireless video system. One battery thats custom built by FreeFly, powers the rig for about 60-90 min, and recharges in 12-20 min. In the $15,000 price tag you get the stabilizer, and the control unit. You attach a monitor to your control unit for the operator to frame.

Now $15,000 seems like alot of money. But think if you need quality and speed….. this can replace the stedicam for a majority of shots, not counting the things a stedi cant do… It can replace the dolley for a majority of its purposes, and with a little clever rigging can accent or replace a Jib. Thats three big heavy, expensive pieces of gear. Replaced by a 3lb bit of aluminum. That price point means rentals will be affordable if you can’t afford to purchase the unit outright. I think its price is perfect. You are paying for a lot of amazing technology.

Be sure to read the rest on T.Stops.

Movi M10 – Introducing a family of 3-axis digital stabilized camera gimbal, so advanced, it redefines the possibilities for camera movement. The heart of the gimbal is Freefly’s proprietary high performance IMU and brushless direct drive system. The gimbal is 100% custom designed in-house by our engineering team. No compromises were made to accommodate off the shelf brushless motors, motor drives or IMUs. Creating the gimbal from scratch allowed Freefly to precisely execute our vision for the next generation of stabilized camera gimbals. In creating this camera gimbal we aim to empower a new era of stabilized cinematography. Freefly MoVI – “The New Moving Picture.”Design & Performance – Lightweight, agile, rigid – these are the words you hear day in and day out at Freefly research and development lab. Freefly began its business building aerospace and UAV products where every gram counts. We have carried this design ethos into our cinema products. In an industry where weight was once considered an advantage, we instead built one of the lightest weight, highest performance, cinema ready 3-axis gimbals the industry has ever seen. This allows the operator to run faster, jump higher, and capture more compelling footage than ever before.About Freefly – Freefly represents the intersection of art and technology. Our team consists of industry leading specialists all focused on one task – inventing solutions to allow unrestricted camera movement. Freefly initially created the CineStar line of multi-rotor camera platforms, which allowed smooth, stable and dynamic low-altitude aerials. After years of research and development in camera stability, Freefly has created the Movi stabilized camera gimbal. Our goal with the MoVI is to empower a new era of stabilized cinematography on a variety of platforms, from handheld to helicopter and everything in between.

The Race to Save 4-Year-Old Eliza