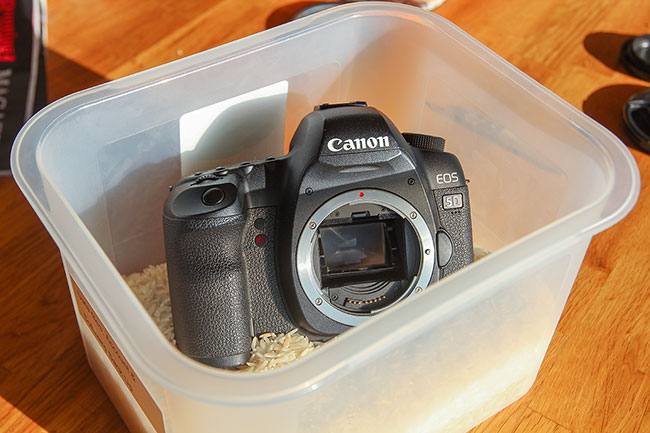 How to Rescue a Drowned Camera

It was bound to happen, the inevitable calamity of my Canon 5D Mark II meeting its demise on one of my many death defying photo adventures. Did it get dropped from a treacherous cliff edge or mauled by a cantankerous grizzly bear?  No, nothing so glamorous.

My beloved camera met its maker due to a faulty telescopic leg in my tripod while standing unattended for just two seconds in the icy waters of Oneonta Gorge, Oregon. It took a dive in four feet of water, hit a rock and had to be pronounced dead after I tried resuscitation by toweling it off and attaching a different lens.

To say that I was mortified would be an understatement, especially when I exited the canyon to witness one of the most majestic sights I’ve ever seen as 100 ft rays of light chased me out of the glowing canyon walls, teasing me with what could have been.

As I drove home with a heavy heart, a flicker of hope ignited as I recalled a story I’d heard on a radio show a couple of weeks earlier. I remembered that a boy had found a lost iPhone in the Ocean and successfully managed to bring it back to life by slowly drying out the phone in a bag of rice.

Could this work for my poor, drowned DSLR that was currently exhibiting signs of interior condensation and completely failing to power up? We’re talking blue lips and zero pulse here. I had nothing to lose by trying it out.

Here’s What I Did: 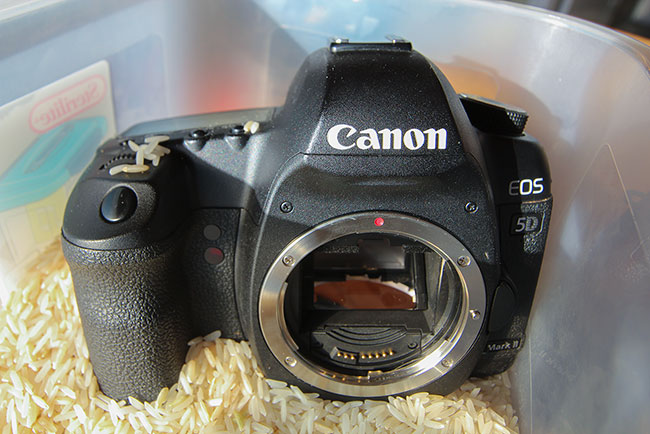 After about 6 days of drying out in the hermetically sealed ‘rice box of resurrection’, I was able to switch on the camera and scroll through all the menus. It’d gone from a complete dead loss to a chance of survival just by using a bag of rice.

I was amazed that the camera now had its electronics back in full working order. Sadly the mechanical damage from when the camera and lens collided with a rock underwater meant the camera was a complete loss.

So the moral of the story is, if your camera goes for a swim, there’s a good chance you could save it by using the simple rice trick. If it goes for a swim and collides with a rock, you’ll be calling up the insurance company like I eventually did.

Did you ever drop you camera in water?  Did you manage to save it? Tell us your story

DIY Wireless Control of Your Canon DSLR for under $50