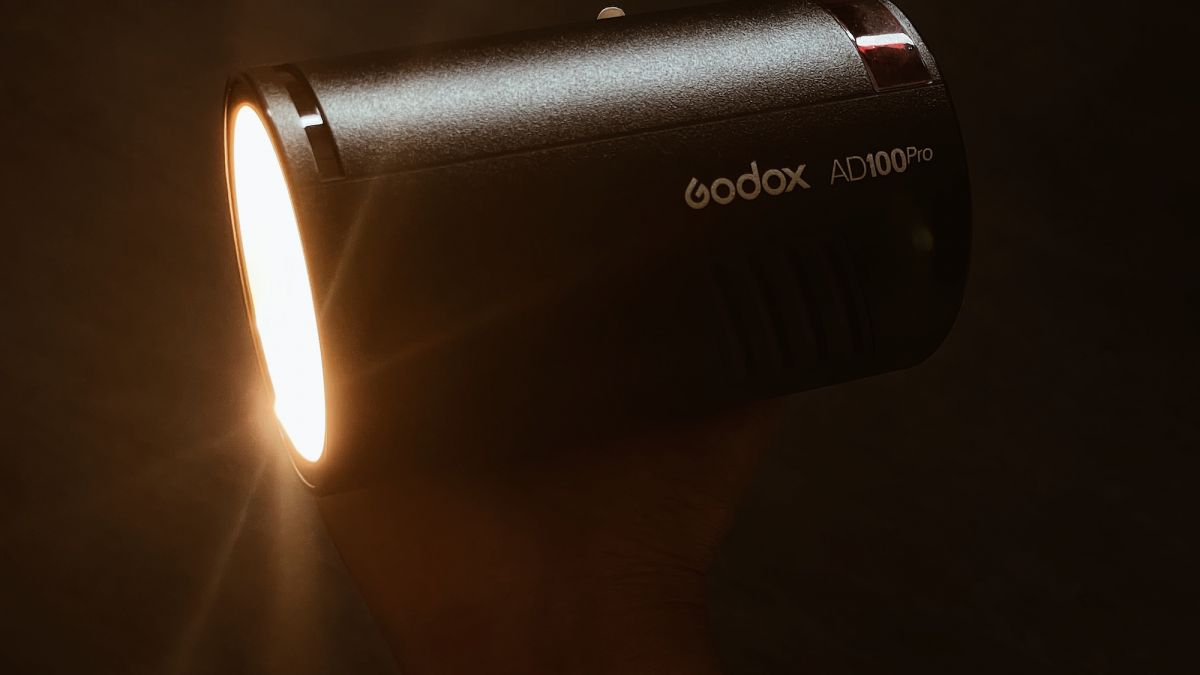 Processed with VSCO with a4 preset
Photography

At the start of this year, Godox announced an interesting new addition to its lineup of flashes: the Godox AD100 Pro. It’s smaller than an on-camera flash and packs a punch with 100 w/s, but what purpose does it serve? With Godox offering a multitude of strobe options ranging from 75-600 w/s of power, it can be difficult to understand why this flash belongs in your kit. But one of the most outstanding features of the Godox AD100 Pro is its modeling light which puts it in a category of its own. In this Godox AD100 Pro review, you’ll learn why this flash is a marriage between two very important lighting products and how beneficial it is to essentially every type of photographer. 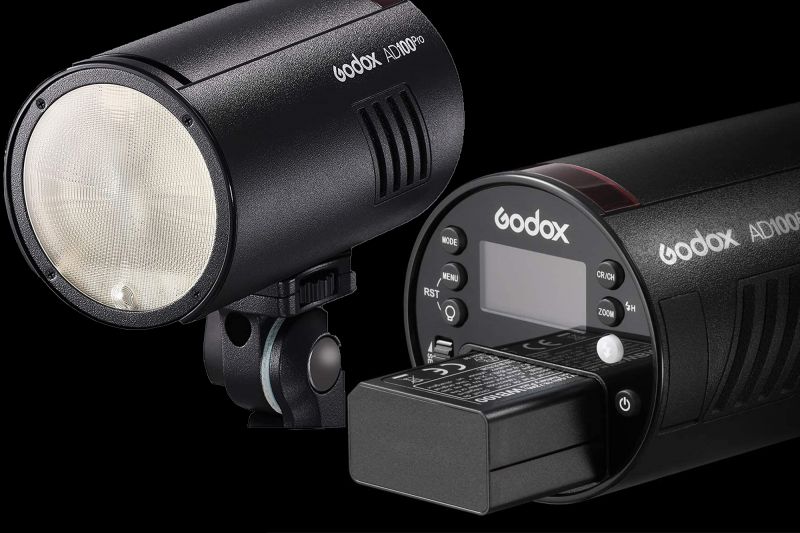 What makes this light so highly talked about amongst flash enthusiasts and portrait photographers? In my opinion, the hype comes from the amount of power it packs in a small product and its powerful modeling light. This is easily the most exciting feature because of how versatile this light becomes. The LED modeling light can be dialed to your intended intensity (1-10) and is 3200K.

I will dive into more of the beneficial uses of this light for wedding photographers a little later on but I wanted to highlight this feature from the spec list. In my past Godox V1 review and Godox AD200 review, the biggest flaws or downsides of those products were the modeling lights. They seemed like afterthoughts, while this seemed intentional. They weren’t very color accurate, didn’t have the right amount of power output, and overall could have been made without the feature entirely. 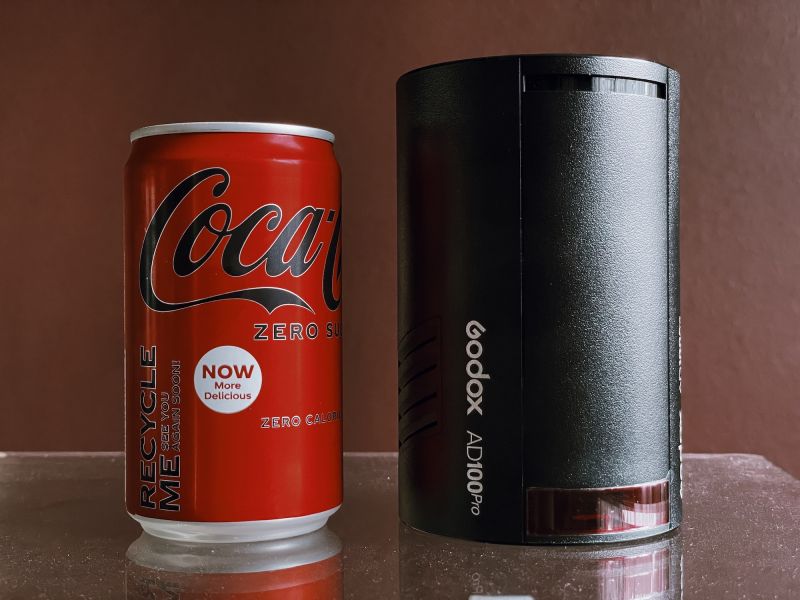 Just take a moment to really focus on this size comparison. That is a MINI can of Coke Zero (you can debate your taste in the comments) next to the Godox AD100 Pro. The fact that this tiny cylinder holds 100 w/s of power when a regular pocket strobe, which is much larger in comparison, is roughly 25 w/s less. It is actually mind-boggling when you consider the engineering and manufacturing details that went into making the AD100 pro the size it is while still maintaining such significant power. For instance, the smallest lens I have is a 35mm and I would have to take the lens hood off in order for them to be the same size.

The compact nature of this flash paired with its power prove that it deserves its own category. It makes for the perfect engagement session light since in most cases you won’t need too much strobe power and run with a smaller gear kit. In addition, it runs off the same battery as my Godox V1 which means I only need to travel with one charger.

The Perfect Combo of Form & Function

Now that I’ve helped paint a picture of just how tiny this flash is, let’s discuss how it actually performs. Frankly, it almost felt too good to be true, that you could get a petite modeling light + mini strobe in one and have it be the light that solves your problems. I’m here to tell you that gear can’t always solve your issues but in this particular scenario, the Godox AD100 Pro exclusively provides solutions. Therefore, I decided to list the problems I have come across with other products and explain how this one flash seems to solve them.

Problem: Having Too Much Power with the AD200s

I’ve run into the problem of having too much light even at 1/128th power using a Godox AD200. While this is definitely a first-world problem that could be solved with my on-camera flash the AD100 Pro provides a great in-between range. At full power, a pocket flash is firing at 75 w/s (and that’s if you have a V1, not the traditional 50 w/s flashes). So you’re losing a ton of power and may not even have enough for the intended look of your back light.

In this scene, the AD100 Pro provided a perfect back light to help highlight the subjects while the AD200 (about 40 ft. behind it) is illuminating the trees at 1/2 power. This scene took place about 20 mins past sunset so we’re essentially working in the dark to try and manufacture sunlight.

The issue with artificial light is that too much of it makes it look fake. If your goal is to recreate sunlight or mimic the natural light direction there are so many products available to help you do that. But the Godox AD100 Pro offers something a bit different than blasting your flash through an umbrella or softbox to create/mimic window light. Moreover, the modeling light allows you to match the ambient light in the room and create more believable lighting setups. It’s almost as if you are enhancing the light patterns you notice rather than creating a new version of the scene. 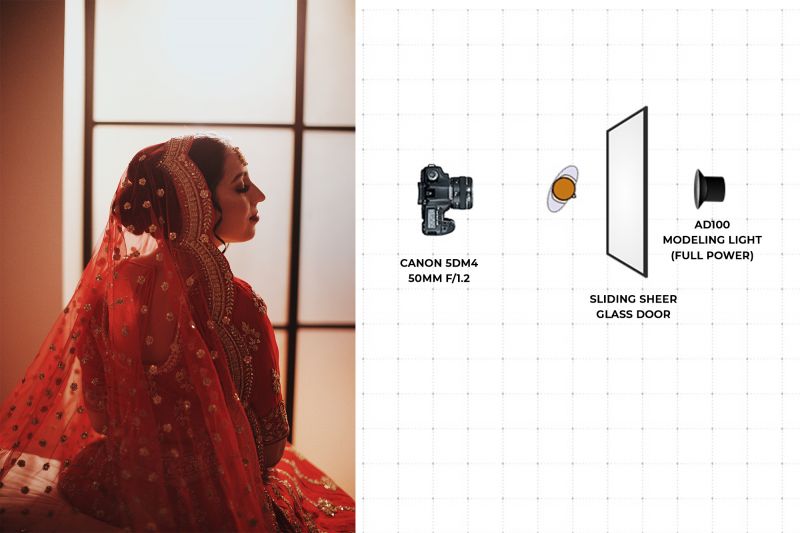 This technique works better if you work with the scene rather than trying to eliminate the elements already working. For example, in this room, this sliding door had a foggy glass that was concealing a room full of chaos. I saw the lamplight shining through the window and decided I needed a bit more light to help the bride pop.

One of the most disruptive things about flash is, unsurprisingly, the flash. When you are working alongside cinema teams it can be a nuisance constantly seeing the strobing light in the footage. Above all, it does affect how hyperaware the subject is of being photographed that it reads in shots. For moments when there is action and both photo and video need to capture it, I prefer using a video light so we can work together to make sure we get the shots we need rather than recreating the moment (one with flash and one without). The modeling light on the AD100 Pro helped immensely for this and photograph static objects like invites, rings, and jewelry with the video team I was shooting this wedding with. 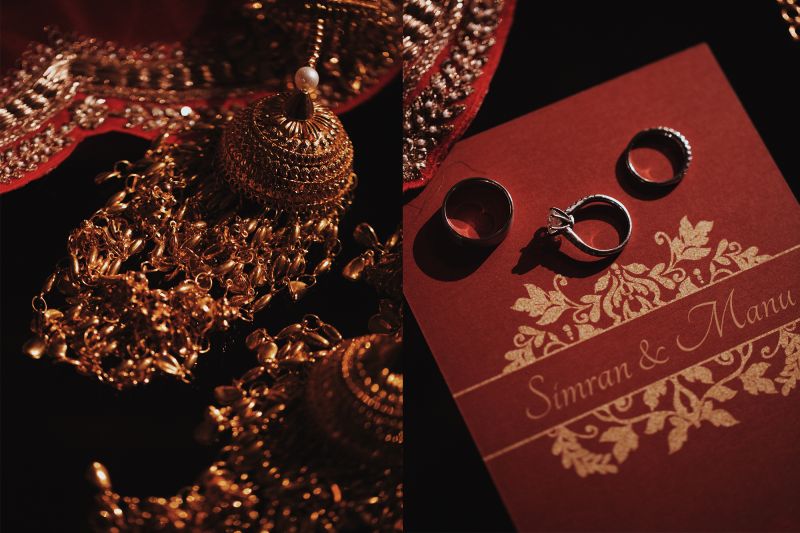 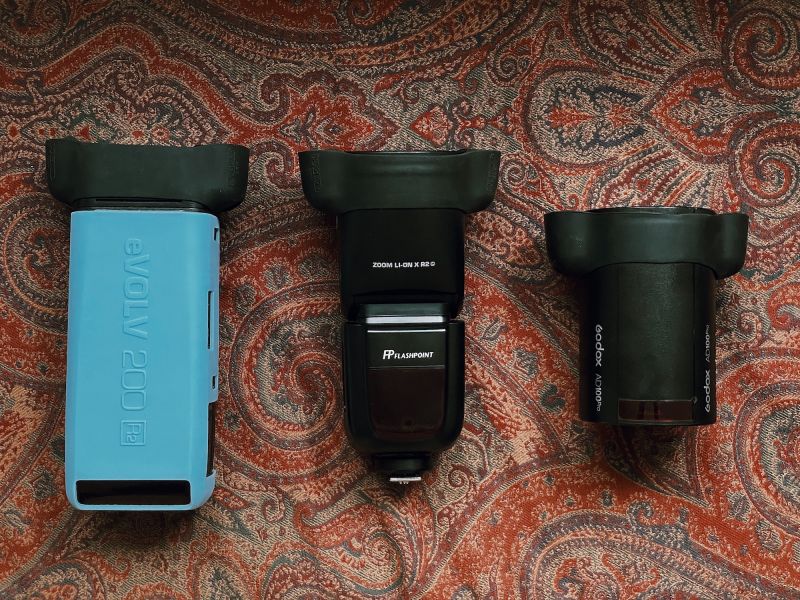 While these flashes constantly go on sale during the holidays and offer a decent discount, there is something to note about why the price of the AD100 Pro is closer to the cost of a Godox AD200 vs. the Godox V1. The modeling light functionality adds a certain monetary value that the other two flashes can’t account for. In other words, you’re getting two strong products (a flash and a modeling light) in one. My advice is to keep an eye out for when they go on sale and you can get your hands on two at the same time. This is the best bang for your buck and also allows you to get the modifiers for both without having to purchase them separately.

In conclusion, it really seemed like Godox took their time, listened to consumer feedback, and made a marriage of two of their best-selling products. That is to say, this light combines the round head and lightweight aspects of the V1 with a bump in power output that gets you closer to the AD200. In short, this is my recommendation: You need two of these bad girls. They will be your new lighting setup for dark indoor reception rooms. In addition, they have already replaced the use of my speedlights in the short time that I have had them and have changed the way that I have been visualizing my scenes. If you’re looking for a portable, powerful lighting solution, look no further. 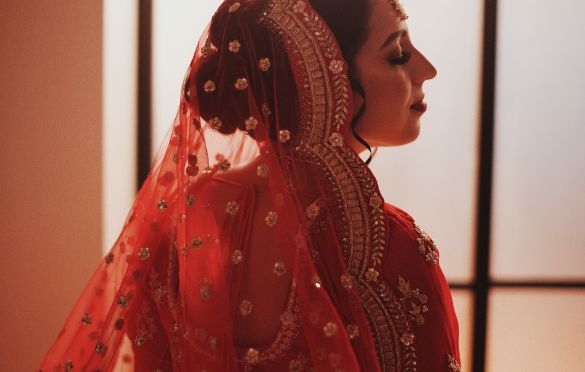 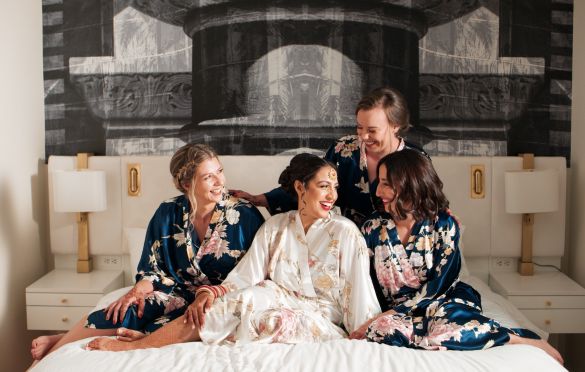 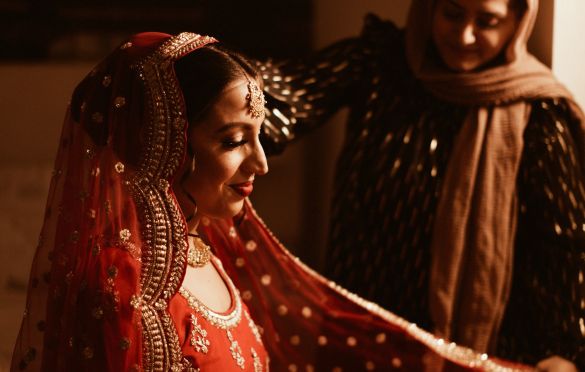 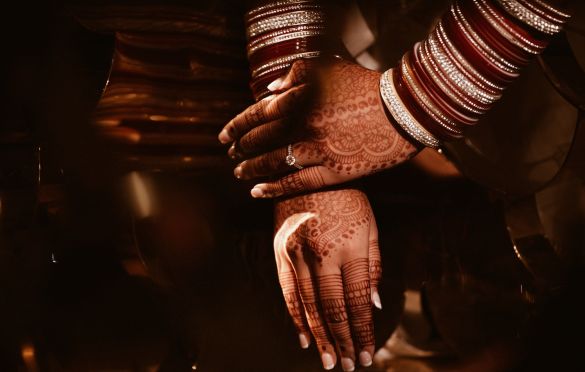 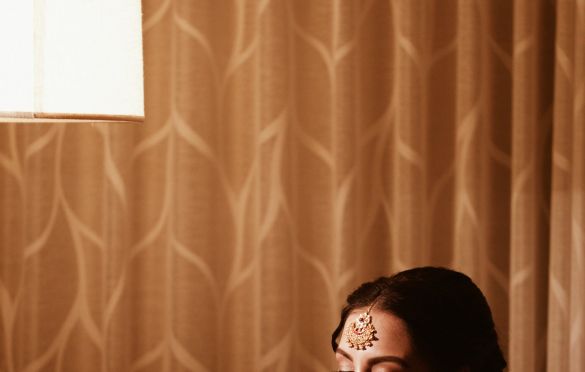 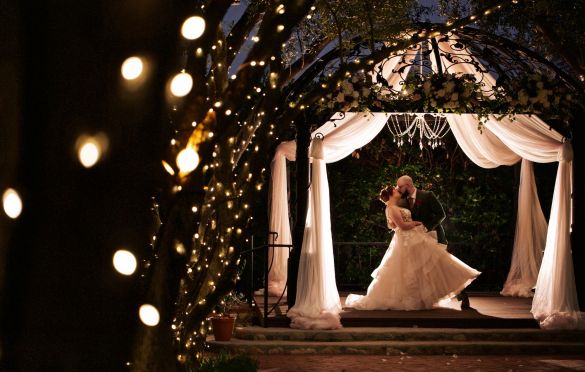 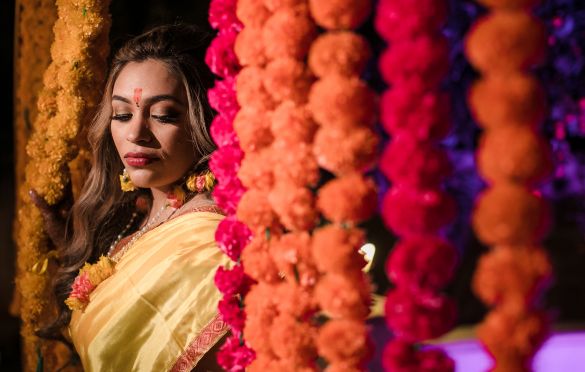 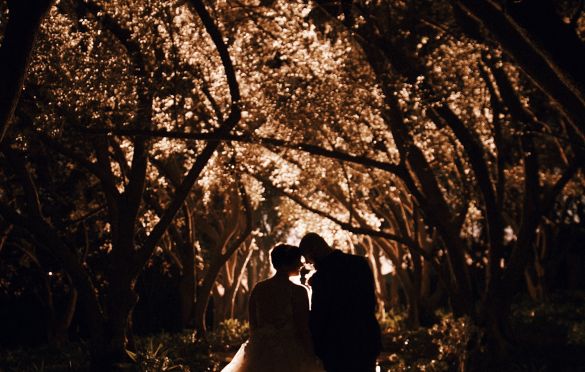 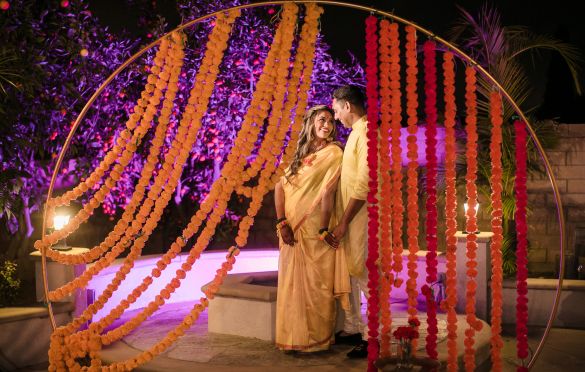 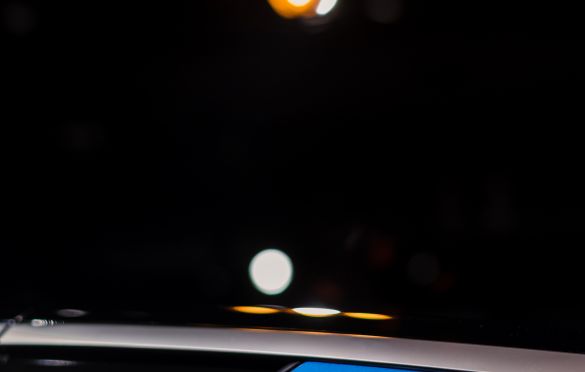 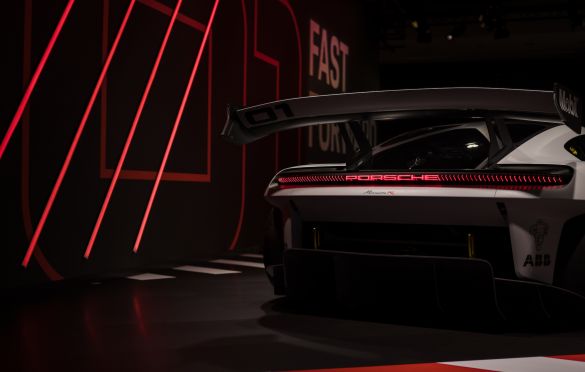 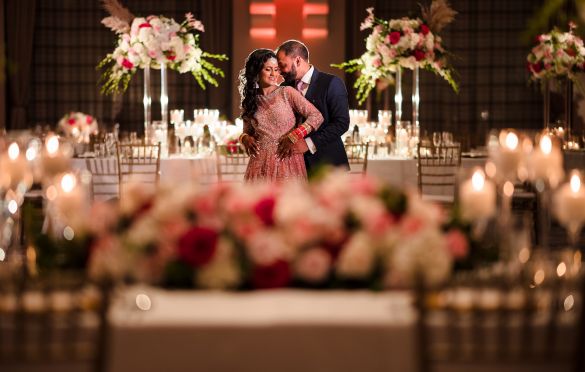 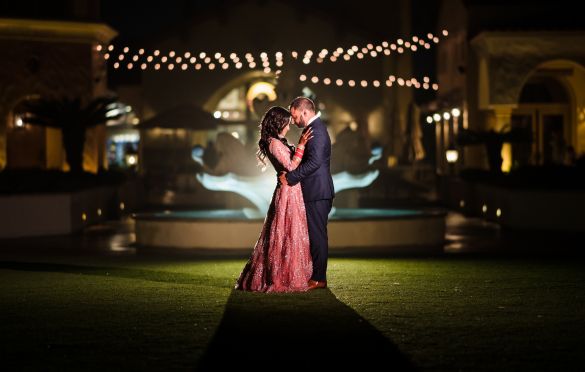 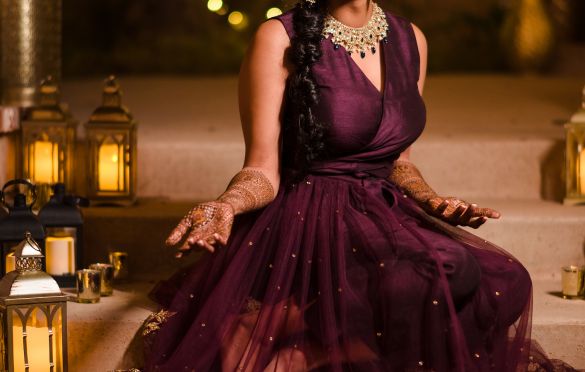 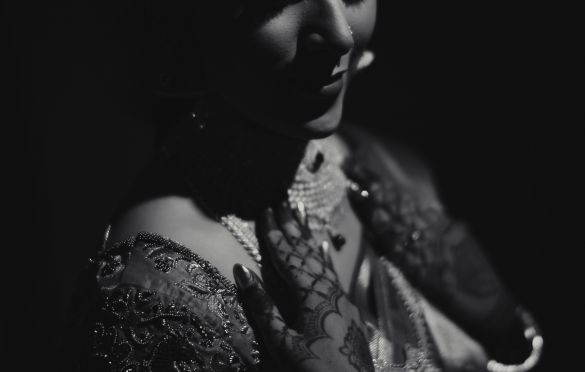 This flash is a marriage between two very important lighting products and how beneficial it is to essentially every type of photographer. It's clear the Godox as been paying attention to consumer feedback with the changes in form, function, and purpose.