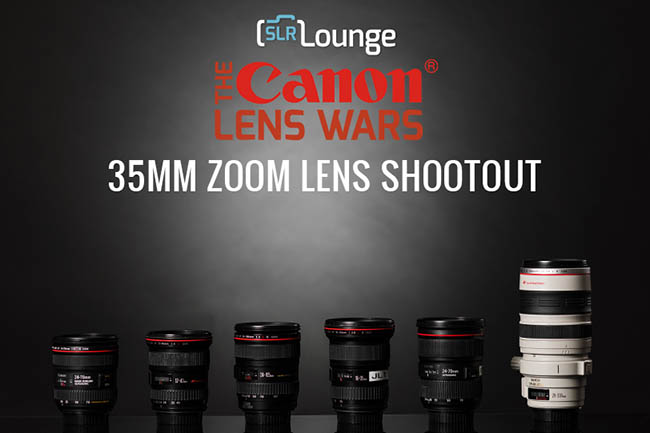 Welcome to Part II of the 35mm focal range of the SLR Lounge Canon Lens Wars series. Since we had 8 lenses in this grouping, we compared the 35mm primes in Part I and will be comparing 6 different zoom lenses that cover the 35mm focal length in this shootout:

In part III we will wrap up the 35mm Canon lens shoot out by comparing our favorite zooms to the primes in the 35mm focal range.

For those who are new to the SLR Lounge Canon Lens Wars series, be sure to check out the Lens Wars teaser video where we introduce the series and our testing methodology and all the other videos on each focal length.

Let’s start from the top with their perceivable visual differences at their respective Wide Open Apertures (WOA). Once again, this is a visual test of differences, not a technical test. So, we are trying to distinguish differences in appearance while viewing images full screen on a Dell U2713HM 27″ IPS monitor.

Although the image quality between the lenses at this focal length is very similar, there is still one lens that stands out from the crowd. The Canon 24-70mm f/2.8L II is the sharpest Canon zoom in the group and has the best overall color and contrast. 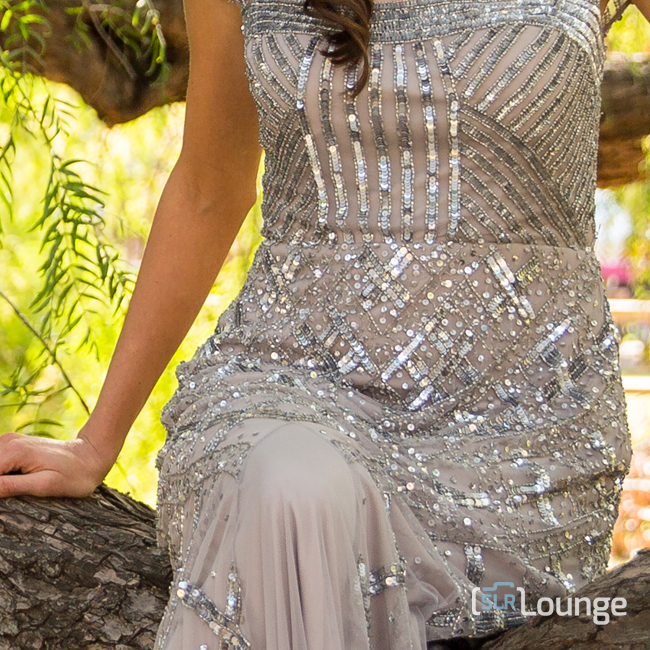 Additionally, the 24-70mm f/2.8L II also has the most amount of bokeh and the most aesthetically pleasing bokeh among the zooms in the 35mm focal length. 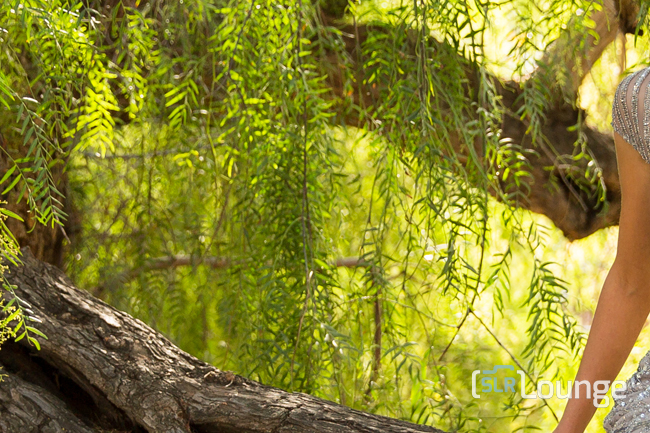 The Canon 24-70mm f/4L is a close second to its big brother. The main difference between the two 24-70 zoom lenses is simply in the amount of bokeh and its overall clarity.

At f/4, this zoom lens predictably produces far less bokeh than the shallower f/2.8 zoom which can be seen below. The 24-70mm f/2.8 is just a bit more creamy and smooth in the background bokeh. 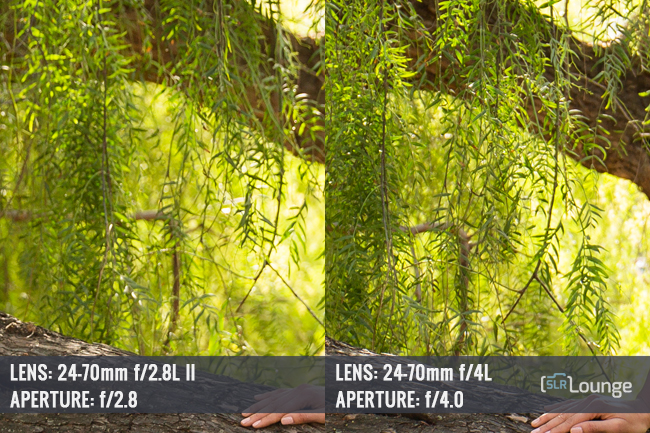 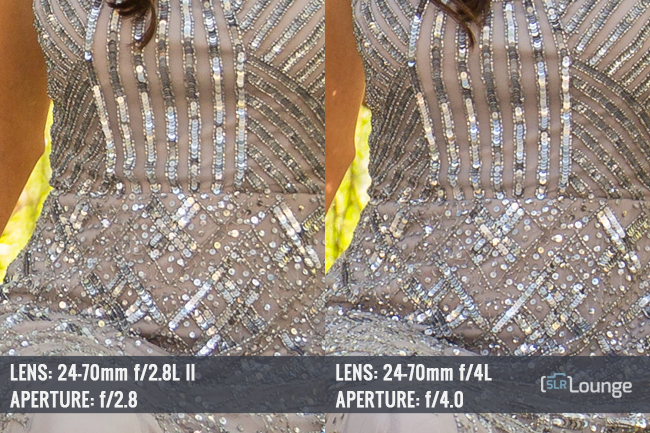 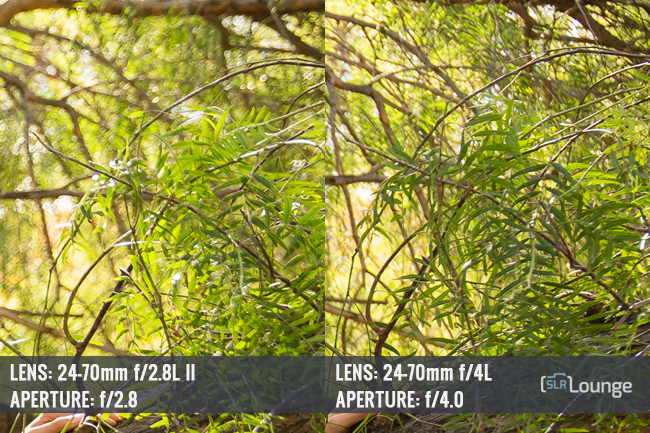 The Canon 28-300mm f/3.5-5.6L is actually pretty impressive as well. In fact considering its extra long and flexible focal range, it is downright incredible. At its WOA of f/3.5, it still creates a decent amount of bokeh, although it doesn’t match the sharpness of both 24-70mm zoom lenses. 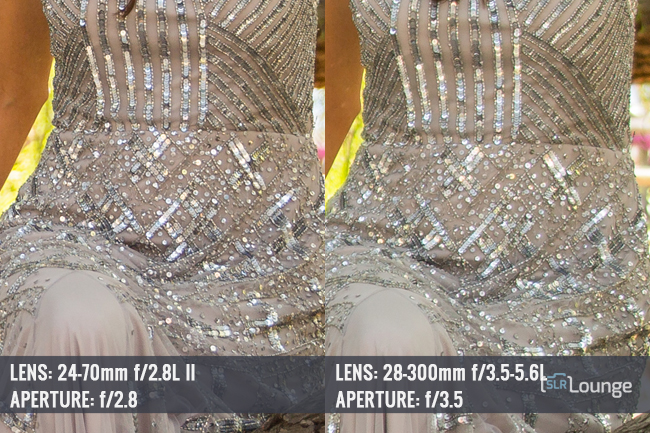 Its bokeh aesthetic isn’t quite as smooth, and it doesn’t display as much bokeh as the 24-70 f/2.8, but still it renders a decent amount of bokeh at f/3.5. 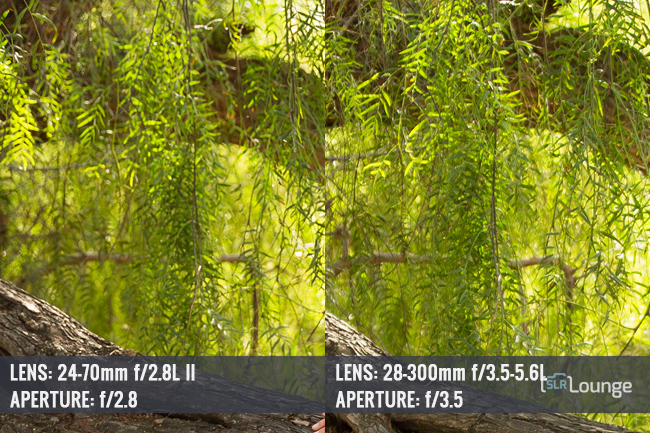 The Canon 16-35mm f/2.8L II has a pretty solid aesthetic look as well. But it is a little behind in terms of the color, clarity and bokeh of both our favorite 24-70mm zoom lenses. 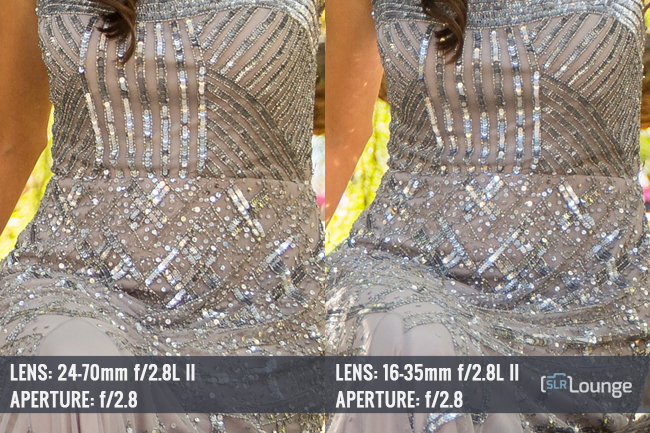 Over the leaves, we can see the difference in this close up crop of the bokeh. The 16-35 lags behind in the amount and aesthetic quality of the bokeh, but that is to be expected with a super wide angle lens. What’s surprising is that it still actually renders a decent amount of bokeh! 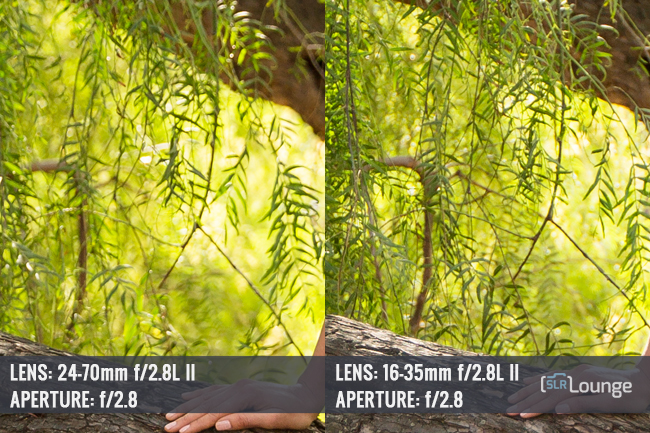 Likewise, the Canon 24-105mm f/4L looks decent, but also lacks the sharpness and clarity of the 24-70s. Looking at the images, it shows that the 24-105 sacrifices overall image quality for its additional focal length, image stabilization and cheaper price tag. While it is still a good lens, it falls significantly behind our two top 24-70mm zooms.

The image below shows differences in not only the color and contrast of the dress, but also in the rendering of the detail. Even though it is a stop more closed than the 24-70mm f/2.8, at its wide open aperture of f/4, the 24-105mm seems to be slightly behind as the detail in the sequins sort of “blends” in to one another just a bit more. 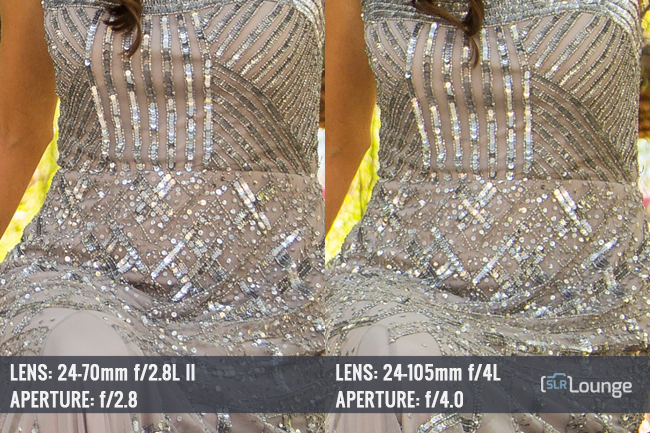 Over our bokeh’d out section of leaves, we can see the slightly larger depth of field in the 24-105 and a decent amount and look to the bokeh. However, compared to the Canon 24-70mm f/2.8L II, it still lags behind in the amount of that smooth and delicious bokeh. 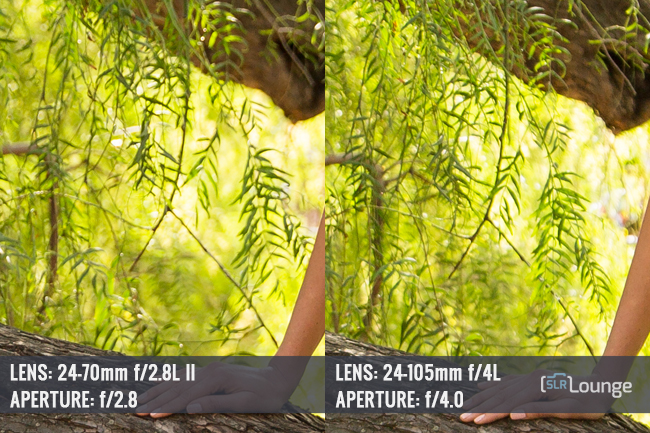 My least favorite in the group was the Canon 17-40mm f/4L. But it does appear to have some sort of minor flare which is contributing to that reduction in contrast and color of the image, and a bit of sharpness as well.

While we can attribute a little bit of the loss in sharpness to the flare, we know the 17-40 isn’t the sharpest lens to begin with, particularly when shooting wide open. Here we can see just how noticeable that difference is when compared against the Canon 24-70mm f/2.8L II with both lenses at their WOAs. 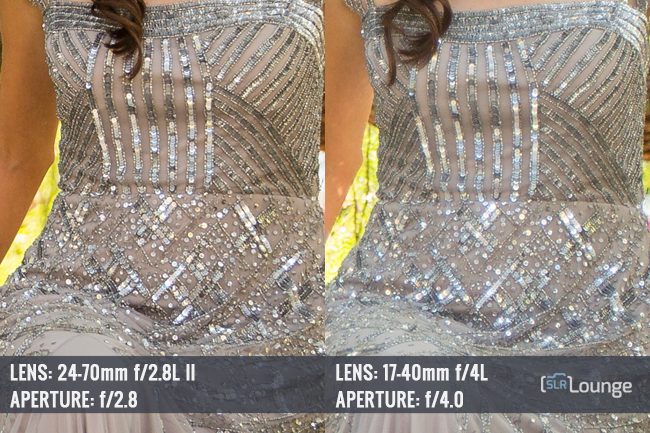 Being a wide-angle lens, and given that its WOA is stuck at f/4, the 17-40mm exhibits the least amount of bokeh compared to the other lenses as well as can be seen below. 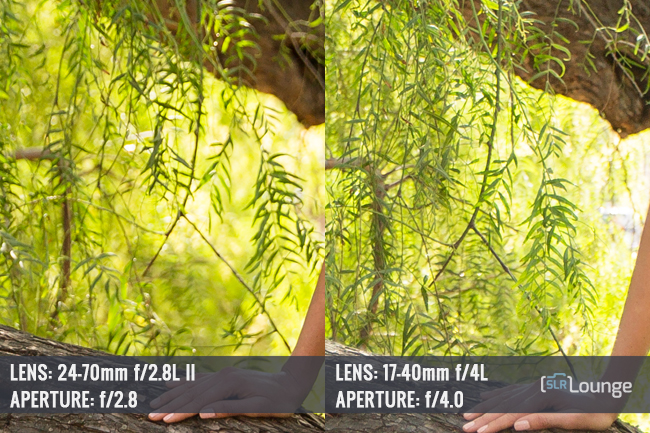 Let’s take a look at these lenses’ Widest Common Aperture (WCA) of f/4 and compare them side-by-side. Looking at center-to-edge sharpness, once again the Canon 24-70mm f/2.8L II was the leader, but the Canon 24-70mm f/4L kept up pretty well, particularly when we look over the area of the dress. 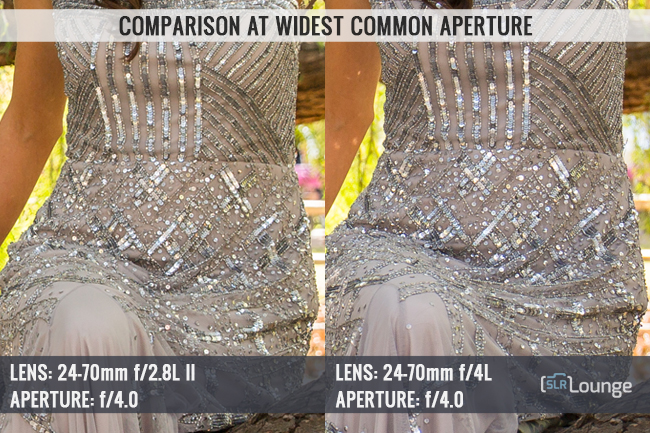 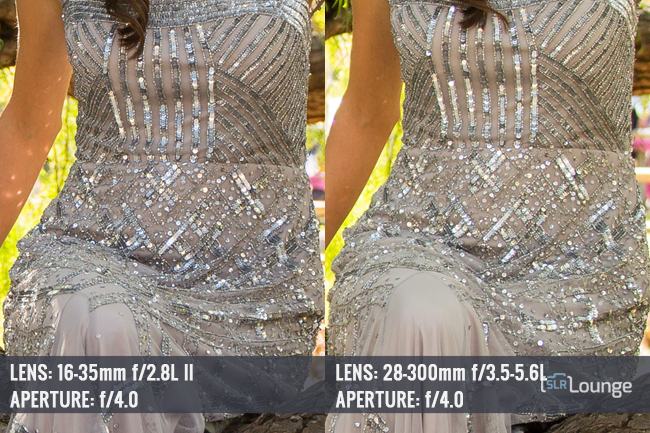 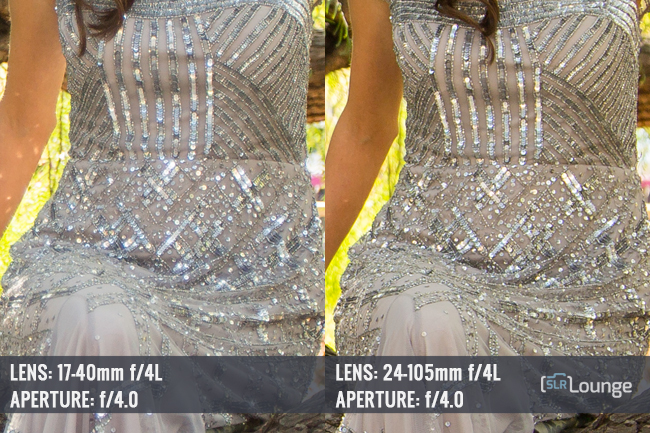 As mentioned earlier, a big part of the Canon 17-40mm f/4L’s mediocre performance was simply because wider angle lenses are going to allow light to spill in from more directions. The stray light is what causes the contrast and sharpness reducing flares. But, this is something that is very difficult to control on wide angle lenses without the extensive use of matte boxes, and it is something that prospective buyers need to consider.Contrast, color and detail on the 17-40mm dipped below the 24-105mm, but it is tough to determine what amount was contributed to the flare vs the lens optics. 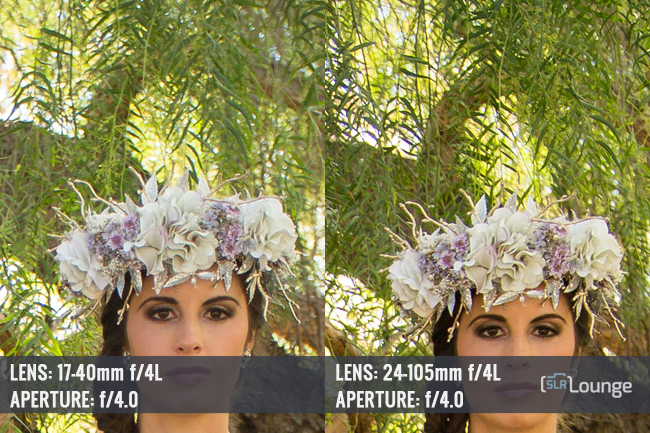 In terms of aesthetics at their WCA of f/4, the 6 images below show that both 24-70mm zoom lenses show quite a bit more bokeh than the other lenses. The next best in terms of bokeh, would probably be the Canon 28-300mm f/3.5-5.6L, followed by the Canon 24-105mm f/4L. The two wide angle lenses in the group have the least aesthetically pleasing bokeh at f/4 (which is expected in a wide angle lens).

These differences in bokeh and aesthetics between the top 4 lenses more or less visually equalized right around f/5.6. 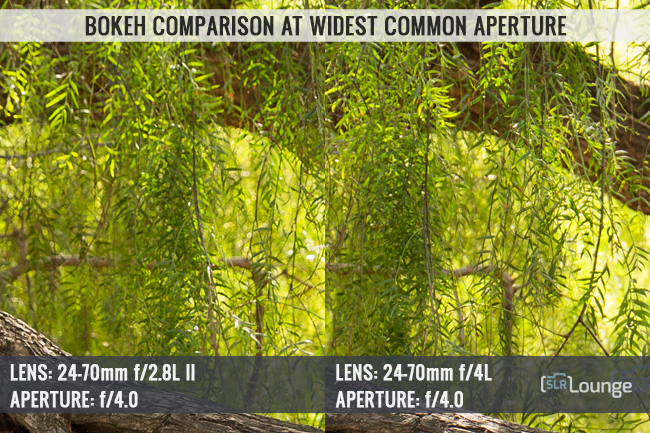 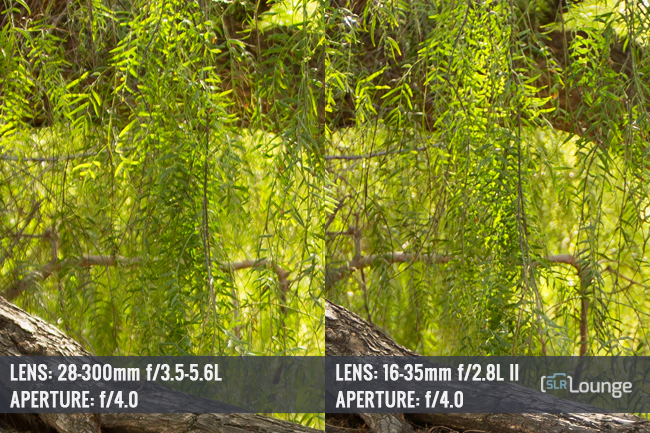 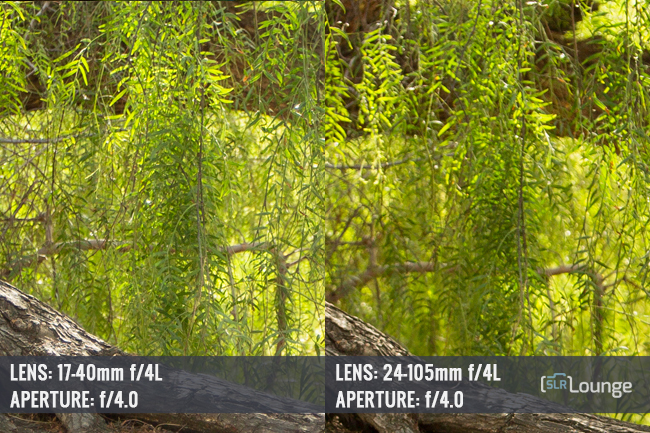 A Note on Barrel Distortion

An expected side note is that the Canon 16-35mm f/2.8L II and the Canon 17-40mm f/4L wide angle lenses did exhibit a little bit more barrel distortion despite being set at 35mm focal length than all of the other lenses. It’s subtle, but it’s there and it is expected given that they are more extreme wide angle lenses.

The Most Versatile Lens, With a Catch

For overall versatility, the Canon 28-300mm f/3.5-5.6L offers such an incredible focal range with quite decent aperture settings that it is hard to overlook. But, again, the issue with a lens like this is that it is going to be quite “good” at everything, but not necessarily great at any one thing. It is not as wide as the other wide angle lenses in this shootout, and its bokeh is not as beautiful as a prime lens or the Canon 24-70mm f/2.8L II.

The maximum aperture also starts at f/3.5 at the wide end and closes down to f/5.6 by the time you reach the telephoto end. Aperture f/5.6 is 2 stops darker than f/2.8. So the lens will give you incredible focal range flexibility, but you will pay a price for it in terms of low light capability (well, and in terms of the overall lens price as well).

However, if you are limited to only 1 lens on a trip, then this $2,689 lens can give you the largest variety of shots, and for that reason, it is an incredibly versatile lens that shouldn’t be overlooked. In fact, I can say that I was downright amazed at the overall quality that this lens could put out with such a broad focal range. I guess I would be wrong in saying that the Canon 28-300mm f/3.5-5.6L isn’t necessarily great at any one thing because this lens is great at giving you high quality images through a huge focal range. When I think “what if I were limited to one single lens on a trip?” Well, this lens would be my top choice if I could only have 1 lens, but not necessarily if I could take two.

For its overall aesthetic and image quality within the 35mm zooms, I am still going to land back on the superb Canon 24-70mm f/2.8L II. From the amount and quality of its bokeh, down to the contrast and sharpness, and being a great low light lens with a fixed aperture at f/2.8, this lens is the clear winner in the bunch in terms of looks, quality and low light performance.

Unfortunately, all of that brilliance does not come cheap. The Canon 24-70mm f/2.8L II comes with a hefty price tag of $2,299. But, what we are looking for in the Canon Lens Wars Series is whether or not the price tag is justified based on lens performance. In this case, while the 24-70mm f/2.8 is more expensive than most of the other zoom lenses, you are getting significantly better image quality and a better functioning lens. So I can easily say this lens is worth the price tag.

The Best Bang for the Buck

Now if the 24-70mm f/2.8L Mark II is too much for your budget, I recommend going with the Canon 24-70mm f/4L. With the 24-70 f/4, you get 90% of its big brothers image quality and aesthetic. It has one less stop of light, but you also get image stabilization which is especially useful if you are recording a lot of DSLR video.

On top of that, its price point is far lower at only $1499. Because of its performance and its mid-range price point, the Canon 24-70mm f/4L is our best bang for the buck in terms of overall image quality, aesthetics and functionality.

The Canon 24-105mm f/4L is again a lens that I wouldn’t necessarily recommend. Is it less expensive? Absolutely. But again, it doesn’t do any one thing extremely well. For example, the 28-300 does “versatility” extremely well. The 24-70mm zooms both provide excellent image quality and aesthetics at two different price points. The 16-35 and 17-40 are specialized in their wide field of view.

Unfortunately, I am putting our 2 wide angle lenses at the bottom of the 35mm focal length list. Are they great lenses? Yes, of course.

But as far as bokeh, image quality and clarity go, they simply don’t quite get there. To me, these lenses are specialty lenses that are worthwhile in situations where I simply need the additional width in the frame. If I can fit my desired composition into the frame with my 24-70mm f/2.8L II, then I would prefer that lens given its aesthetics and image quality. As a result, I would consider our two wide angle lenses more “specialty lenses” that are good at the 35mm focal length, but not necessarily great.

But, if I am choosing between the two wide angle lenses, the Canon 16-35mm f/2.8L II is the one that I would recommend for image quality, aesthetics and overall performance. Point being, its additional price is justified given that it is twice the lens of the Canon 17-40mm f/4L.

I hope you enjoyed this 35mm focal length installment in the SLR Lounge Canon Lens Wars series. We will be wrapping up the 35mm series by comparing the best 35mm prime lenses and the best zoom lenses that cover the 35mm focal length.

Stay tuned and in the mean time, be sure to check out the rest of the SLR Lounge Canon Lens Wars Series.