Lauri Laukkanen, a young Finnish photographer, is kicking off a new weekly article series called: “ANALYZE IT!” Every week he will be looking at a photograph, and breaking it down to different key-components that make the image standout from the rest. And finally, after analyzing the photo, he will use the gathered information and try to recreate the photograph as well as he can. 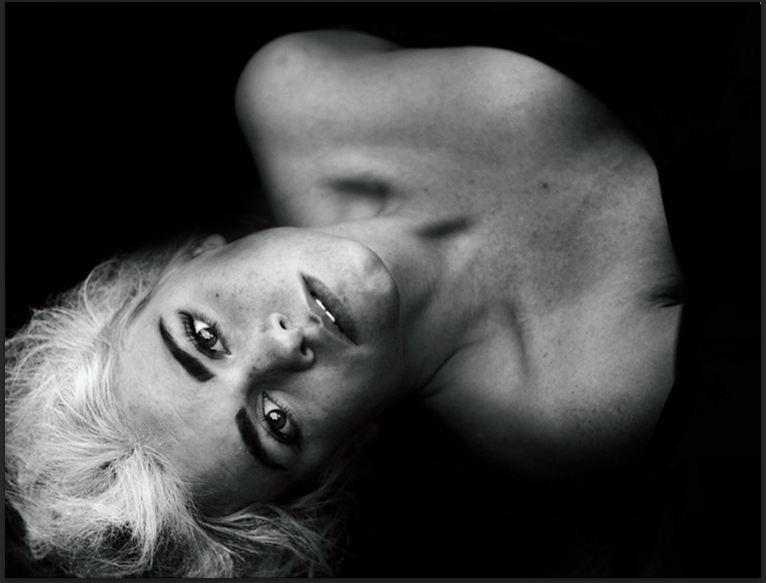 We have all seen great photographs. But what is it that makes a photograph so great? Is it the camera? Is the model? No.

Sure, the camera and the model can have a great impact in the creation of a photograph, but what really makes a photo standout is the little details, like composition, lighting, make-up, depth of field, etc.

I chose today’s photograph (“For a Lover” by Kalie Garrett), because I feel that it’s a great example of how composition, lighting and make-up can turn a very simple idea, into a beautifully serene photograph. So, with that said, let’s start breaking it down. First off is composition.

“[The rule of thirds] proposes that an image should be imagined as divided into nine equal parts by two equally-spaced horizontal lines and two equally-spaced vertical lines, and that important compositional elements should be placed along these lines or their intersections”

Just a quick glance at my handdrawn “rule of thirds”-lines shows us that the photographer has placed the most important compositional element, the eyes, at the lower-left intersection. Our brains function in a way that makes this type of a composition look good in our eyes. When we look at the photo, our eyes travel along the horizontal and vertical lines and they tend to focus on the elements that are in the intersections.

Another important compositional element in this photograph is the “visual triangle”.

This term might be new to you, but if you study advertising and other visually appealing compositions, you’ll usually be able to find visual triangles there. Placing important compositional elements in a triangle allows our eyes to travel all the way around the photograph, and helps us see the photo as a whole instead of being distracted by just one or two elements. It also tends to guide the viewers eyes to the spot that we want the focus to be on, in this case the eyes.

When analyzing the lighting in a photograph, the first place to look at are the model’s eyes. They tend to reveal all the needed information about the lighting used.

In the eyes we see what are called the “catchlights” (the reflection of strobes, softboxes, or other modifiers). In this case, I actually believe that the model was lit with the light coming through a large window. I think this is the case, because the catchlights are pretty large, and slightly deformed. If this would have been lit with an umbrella, the catchlights would’ve been rounder, and a softbox would give more of a rectangular catchlight in the eyes.

Also, by looking at the shadows, we can say, that no other lights (“fill lights”) have been used. The shadows are very dark, and the catchlights don’t show another obvious light-source.

There are a few other elements that make this photograph pleasing to the eye. First, the focus. The model’s eyes stare right at the viewer, and by having the camera focus on them (and leaving other parts of the photograph slightly out of focus) the viewer can feel an emotional connection with the model, which helps this photograph to stand out from other similar photographs.

Another small, but vital, detail is the contrast between the head and the chest. Leaving the chest slightly darker than the head, helps in bringing out the model’s face, and makes the viewer concentrate more on the head.

TIME TO RECREATE IT!

The intense graphic eyebrows were the main focus when creating the make-up. The eye make-up was made with a light layer of brown and grey shadowing that tones off towards the inside corner of the eye. A few individual false lashes were added to the outside corners to open up the gaze.

The skin was left naturally transparent, using only a thin fluid foundation. To brighten up the face’s natural highlights, we used a highlighter and an under eye brightener. Contrary to a normal photoshoot make-up, powder wasn’t used at all, as we didn’t want the skin to become matte. The lip’s edges were brought out with a lip liner that was of a slightly darker tone than our models lips, and a lip stick of the same tone was applied on the center of the lips. The lips were deliberately left to look a little chapped.

While shooting, we had a slight problem with getting the model’s chin in the right position. But after a while we figured out that the photographer must have placed a pillow under the model’s head in order to lift the head (and chin) slightly higher. When we understood this, everything else was pretty easy to recreate, because the information we had gotten by analyzing this photograph had been pretty extensive and helped us out quite a bit. And with that said, here is the recreation: