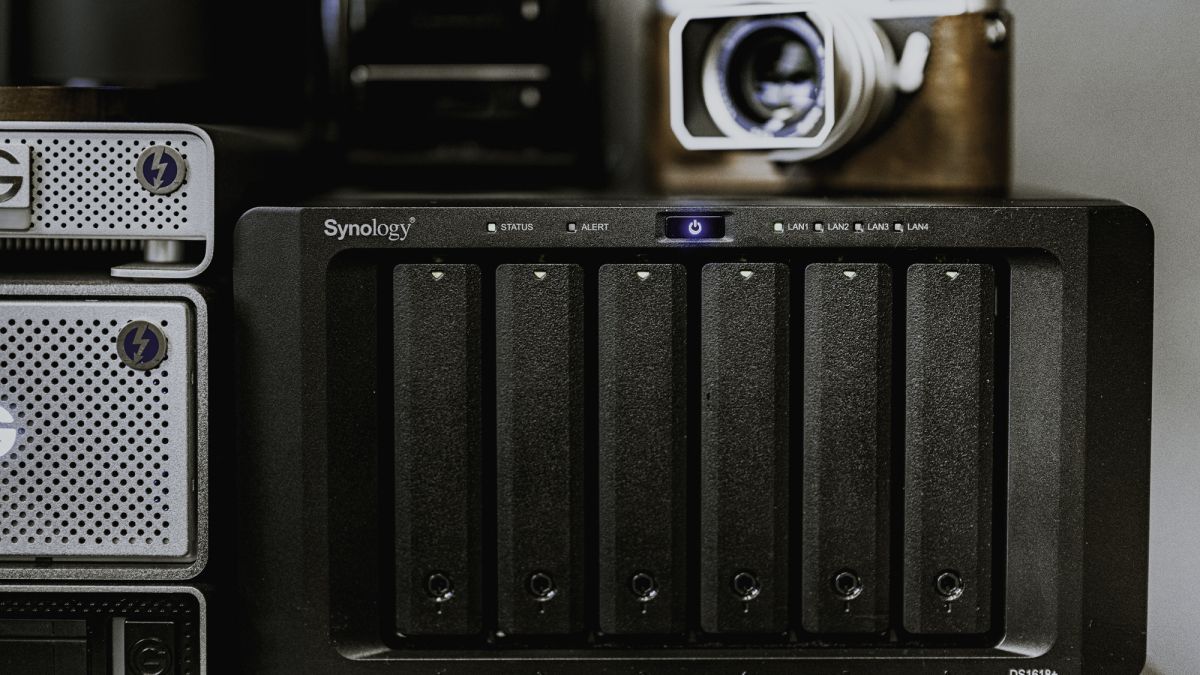 For those of you looking for solid and reliable NAS solution, Synology is just about as good as they come. Last year, Synology released the DS1618+ which might just be the best option that I’ve found for photographers looking to move to a NAS (Network-attached Storage) device. It has the potential to be main storage device for a large studio like the one I run with 6 photographers totaling over 150 weddings per year or a single photographer looking for a solid and reliable storage solution.

The DS1618+ is a 6-bay small-to-medium-sized studio NAS which can support up to 72TB (6 x 12TB), can provide 10Gb ethernet speeds with the addition of a NIC card in the PCIe slot, and has one of the most user-friendly NAS interfaces on the market with a prosumer level price tag. It’s exactly what I would upgrade to first had it been available two years ago when I purchased the larger DS1817+ model. Our studio network is faster and more scalable than I would have ever imagined it to be 5 years ago thanks to Synology. With the cost of hard drives and 10Gb networks continuing to fall, NAS devices like the DS1618+ are going to be the norm for not only professional photographers but enthusiasts alike.

Who Is It For?

There are still many photographers that aren’t completely familiar with how a NAS works or what the reasoning would be behind implementing one over a regular old directly connected RAID device. If you are looking for a simple way to store your files, a dual-bay RAID device is a great way to get started. Today, you can easily pick up a two-bay 20TB RAID unit for under $800, which would have cost you close to $2k less than 5 years ago. It’s basically what I paid for a 10TB RAID back then.

The difference is pretty simple actually, a NAS (Network-attached Storage) device is basically the same as a RAID unit but is connected via the network. A NAS device also has RAID capabilities but it’s connected via an ethernet cable to your workstations NIC card rather than a USB or Thunderbolt cable. For a lot of photographers, the thought of setting up a NAS sounds like a daunting task. Why go through all the hassle of configuring a network or hiring someone else to do it for you only to gain network access to your files? Well, let me explain why I did it and why the answer might have you more interested than you first thought.

The only real benefit to running a directly connected RAID device that doesn’t have network capabilities is speed. Since you are directly connected via USB or Thunderbolt, the speed (depending on the actual device) is typically the same as any other external hard drive that you have used. The downside, that’s about it. With the prices of 10Gb network cards and cables continuing to fall, it will cost you less than $300. That, my friends, is about 3-4 times the speed of what you will see from any USB or Thunderbolt directly connected RAID unit or external drive. 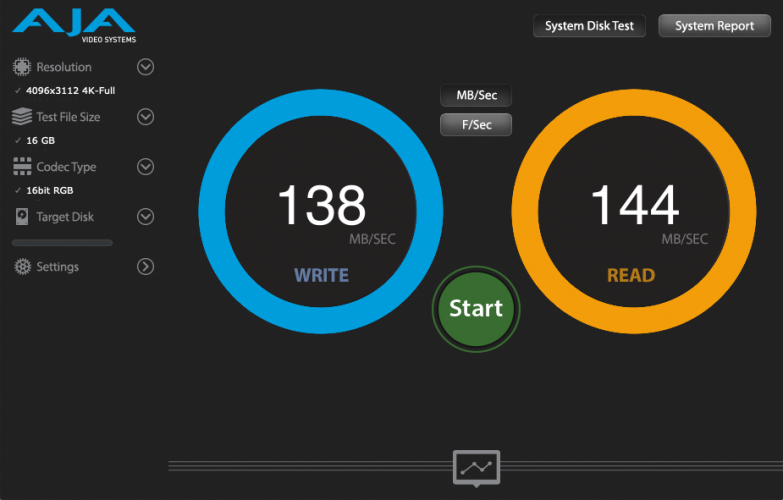 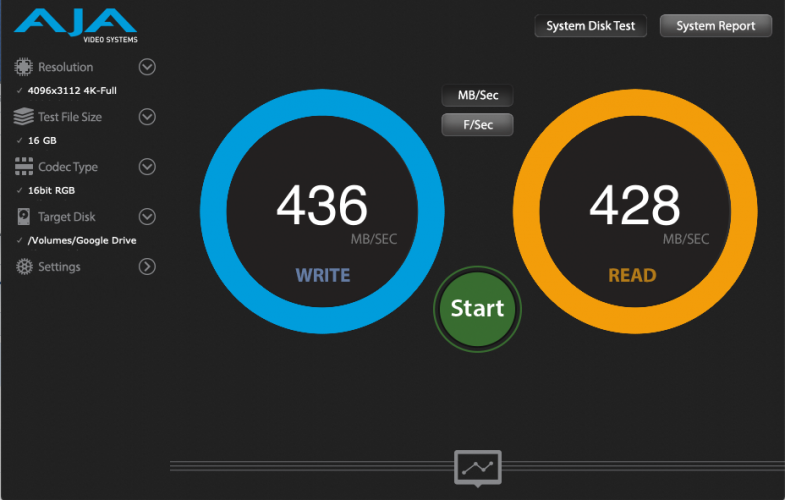 With just a little bit of network knowledge, or knowing someone that does, the user-friendly interface and setup wizard on the Synology DS1618+ makes setting it up and configuring it a lot easier than you would expect. While I used to be a network engineer and have a background in this field, I know plenty of other photographers who have set Synology NAS devices up without any trouble. Once it’s up and running, it doesn’t take long to see where a NAS device shines. It’s basically a lot like a server and not just a bunch of hard drives running waiting to be filled up with media files. Setting up the RAID configuration is extremely easy and Synology even has their own proprietary RAID called SHR which is what I am running on both my DS1817+ and my DS1618+. Since the DS1618+, as well as other NAS devices, are network devices, it allows you to have remote access. Not only you but anyone else that you want to give access. For example, other photographers in your studio. You can create shared folders that automatically sync to cloud storage

The DS1618+ also has the ability to run apps like Plex (media server) and Surveillance Station which allows your NAS to act as a server for your security cameras rather than having to pay a premium for a server from the security company. Obviously, these are all extra candy toppings that are available if you need them but the primary purpose and reason for photographers to invest in a unit like this is the network accessible storage that is reliable and offers several options for redundancy.

The DS1618+ is the perfect solution for enthusiasts and professionals alike. Synology has given us photographers a network-based storage solution at an affordable price with enough options to basically use it for storage alone or like a server to run apps. It comes with a quad-core Intel Atom C3538 CPU which is clocked at 2.1GHz, which is plenty of power for running apps and file transfers at 10Gb speeds. It has 6 available drives that can hold up to 72TB (6 x 12TB) of RAW storage. You don’t have to fill all 6 bays in order to use the device either, you can start out with just two drives and still have RAID options if that’s what you want to do. The DS1618+ holds 3.5” and 2.5” form factor drives and are very easy to mount in the plastic trays. If you decide to fill all 6 bays and need more storage later on, you can either replace the drives one at a time with larger capacity drives or add a Synology expansion unit such a DX517 which has 5 bays and costs around $450 right now.

As mentioned earlier, one of the most impressive features on the DS1618+ is the PCIe slot that you can use to install a 10Gb Ethernet card which will run you an additional $150-$250 (depending on whether it has one or two RJ45 connections). Both of my Synology NAS devices have a 10Gbe card installed which are hard-wired directly to a 10Gb Ethernet switch with Cat6a cables. Luckily, even 10Gbe switches have dropped significantly in price. The Buffalo BS-MP2008 is an 8 port switch that costs about $550 right now. Obviously, with the addition of the 10Gb ethernet card and switch the cost of running this NAS starts to creep up but these are only options if you want to use them. The DS1618+ comes with four, gigabit ports, that allow you to run at gigabit speeds which is plenty for a lot of photographers.

I do wish that the DS1618+ would come with the 10Gbe card already installed, but they do have other models that do. I would imagine that they will be releasing a model soon similar to the DS1618+ that does come ready to install with the ability to run 10Gb speeds. 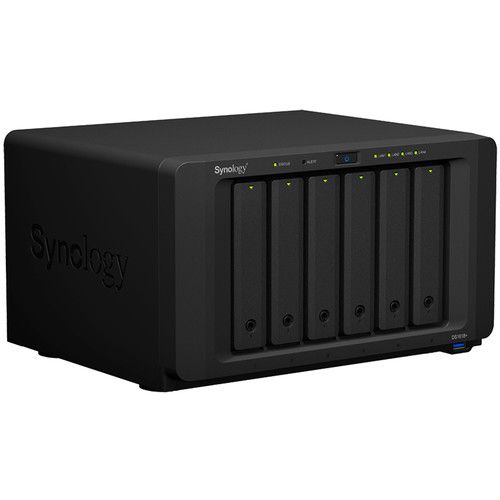 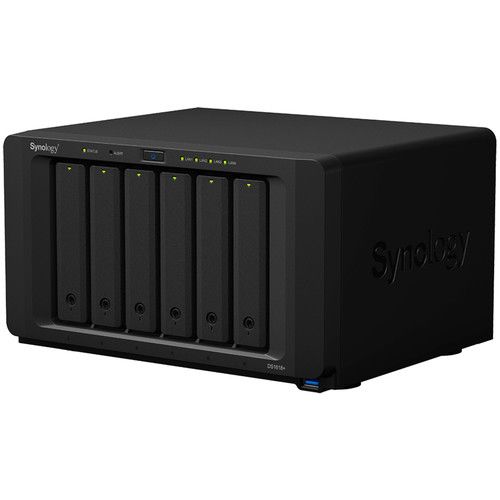 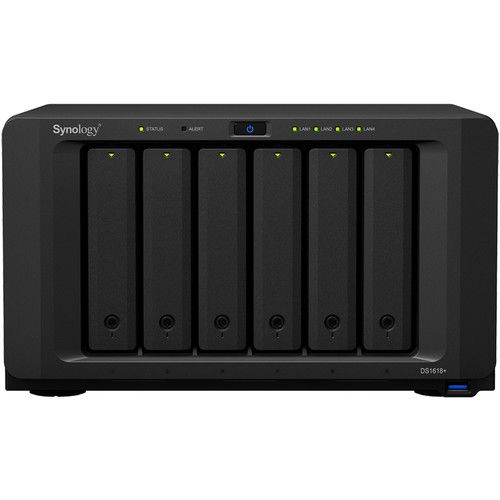 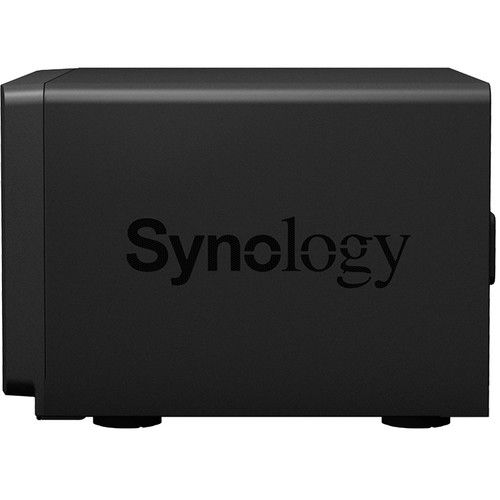 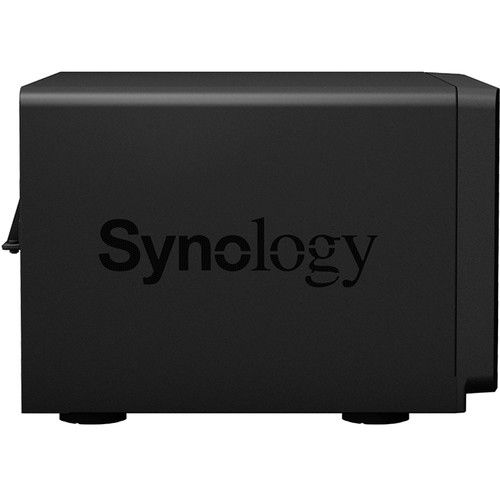 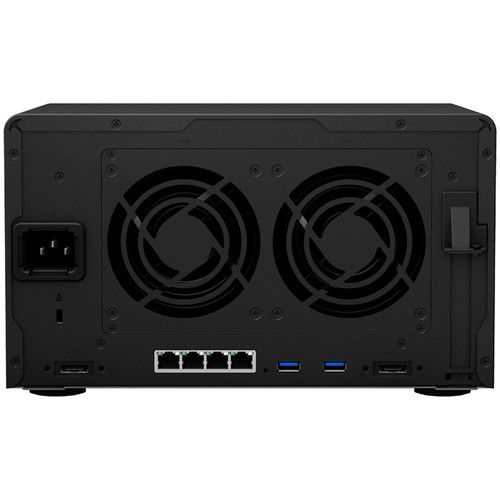 Whether you have a need for network-attached storage or not, the 10Gbe speeds that the DS1618+ and similar Synology NAS devices offer is something that is critical to those who value speed and time spent transferring files. Aside from the speed, I simply love the scalability that the Synology NAS devices offer with the multiple bays and expansion units that are cheaper since they aren’t running software. Whether you’re running a NAS or an external RAID unit, remember that you will still need additional layers of protection and redundancy. If you’re following the 3-2-1 backup strategy you will want to have two other copies of each file, one of which stored in the cloud. Synology offers a few different options for cloud storage, the most popular being the Backblaze B2 storage for NAS devices. This extremely easy to setup and while it is a little more expensive than the $5/month version that Backblaze offers for directly connected devices, it’s pretty affordable once you consider what is at risk by not having it.

I’ve been running the DS1817+ now for just about two years and have one of the DX517 expansion units connected to it. It’s basically the same NAS as the DS1618+ just with an additional 2 bays. I use that as our studio’s NAS for our associate photographers to store all of their RAW files and LR catalogs on while I store all of my files on the DS1618+. I have drives in every bay on the DS1817+ which has 60TB’s of storage. I have exactly 34.9TBs of storage on the DS1618+ with 8TB Seagate Ironwolf drives installed. I’m running the Synology proprietary RAID SHR on both which allows for a single drive failure. Both are also backed up to the Backblaze cloud for that additional layer of redundancy.

Once you’ve experienced 10Gb speed you’ll never want to go back. The DS1618+ is what I would consider the perfect NAS device for a photographer looking to upgrade to network-attached storage for the first time or someone looking to add an additional unit as I did. I don’t really think you can go wrong with this NAS and unless you want to keep having to purchase new external RAID devices every couple of years, this is what I would choose to invest my money in for scalability sooner than later. And if you like movies, you can’t beat a storage solution that also provides a media server like Plex. It’s definitely the best investment I’ve made for the studio to date, and for several reasons. And did i forget to mention how you can access your files remotely? For most of us, we’re going to prefer to work while directly connected but having the capability to access your files directly while you’re on the road in those “emergency” situations is an absolute life saver.

Once you’ve experienced 10Gb speed you’ll never want to go back. The DS1618+ is what I would consider the perfect NAS device for a photographer looking to upgrade to network-attached storage for the first time or someone looking to add an additional unit as I did.