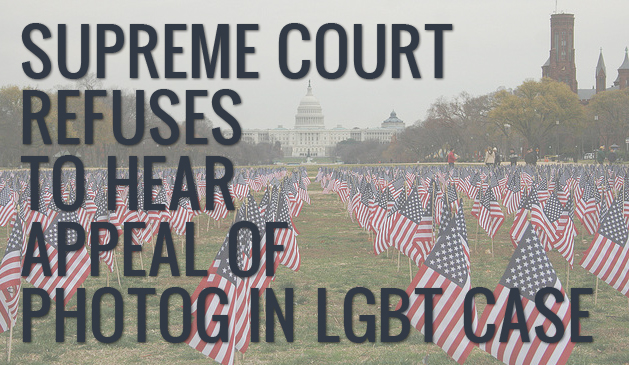 ‘Do Gay Rights Trump Religious Rights?’ a headline reads in a local paper.

A few months ago, we wrote about the case of Elane Photography, who in 2006 was contacted by a lesbian couple, Vanessa Willock and Misti Collinsworth to photograph their commitment ceremony. When Elaine Huguenin, owner of the photography company declined, stating that she only covered “traditional weddings” because it was directly against her religious beliefs, the couple filed a complaint to the New Mexico Human Rights Commission. The commission ruled that the photographer violated the state’s anti-discrimination laws and fined Elaine for violating the “sexual orientation law.” The case then went to the New Mexico Supreme court and finally, the U.S. Supreme Court.

In other recent cases, there have been lawsuits against a baker, a florist and an event location who have refused services to same-sex couples. Last month, SB 1062, a measure that would have allowed businesses to deny services to gay and lesbian customers for faith based beliefs, was vetoed by Arizona’s governor after heavy criticism from the business community.

The question I posed in my previous article about this case remains the same, should the government dictate to business owners who we work with, even if it conflicts with personal religious beliefs (especially if those religious beliefs conflict with popular opinion?) As artists, should we be forced to “create expression” for customers that are in direct opposition to personal beliefs?

Let’s hear your thoughts in the comment section below.

Review: Why Every Photographer Should Use Contracts | The Law Tog Portrait Bundle