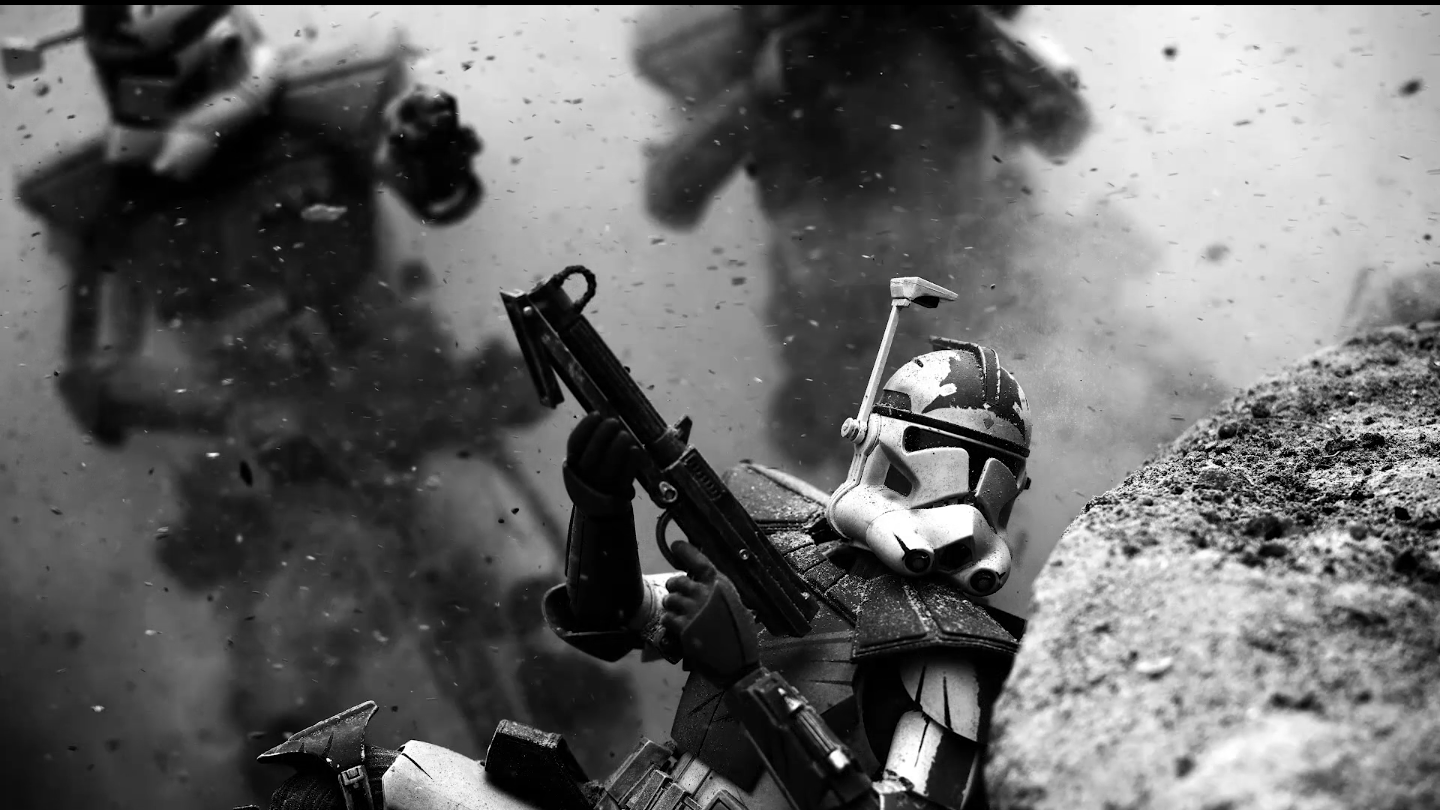 Star Wars Toy Photography Through The Lens of a U.S. Marine

They are faceless men wielding guns, ready to carry out their commander’s orders. Whether in this galaxy or another, the Clone troopers storm into combat, the chaos of battle exploding down, their black and white armor standing out amongst the galactic battle raging around them.

Like a scene out of the latest Star Wars movie, U.S. Marine Matthew Callahan tells the stories of these toy soldiers in battle. As a combat correspondent, Callahan’s real job is to tell the stories of the men and women who serve in the military, but in this personal project, Galactic Warfighters, Callahan blends his love for Star Wars and his knowledge from his job to photograph sixth scale figurines, sometimes recreating the scenes he photographs in the Marine Corps. 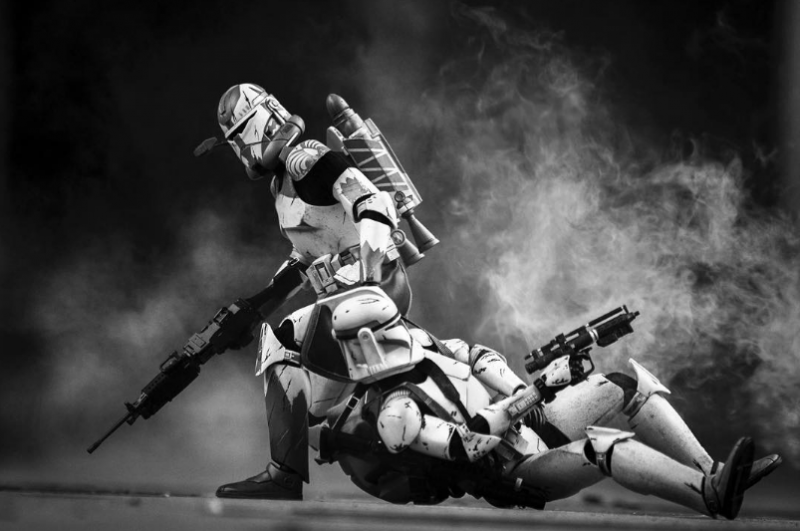 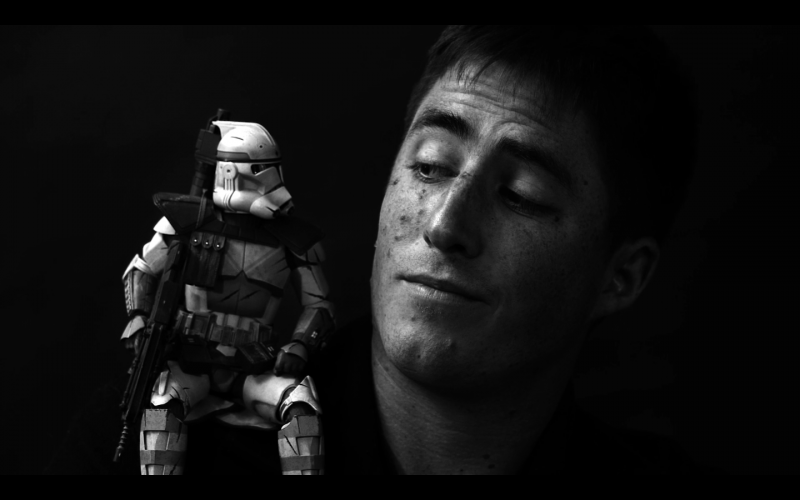 Five years ago, when Callahan was injured in Afghanistan, he found a passion for photography. After re-enlisting, he began training to become a combat correspondent. While at Defense Information School, Callahan had an assignment on shutter speed – to create an image that froze and blurred motion. He borrowed his roommate’s storm trooper toy for the assignment and from there the project, initially named TheDroids, was born. Using his barracks as a studio, Callahan used the limited equipment he had – one light – combined with toiletries (used as makeshift gels), to experiment with light and long exposures so he could emulate a multi-light setup. 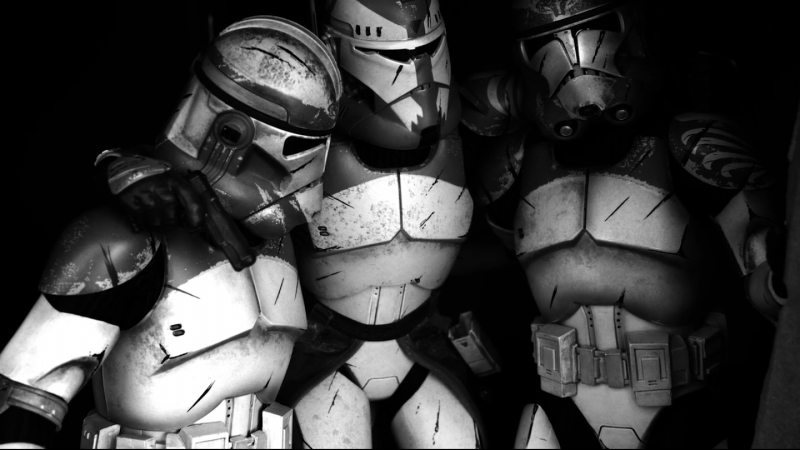 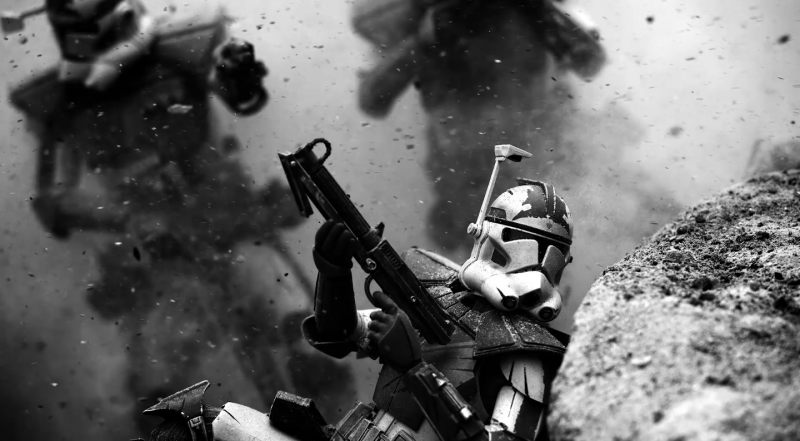 Now, Callahan breathes life into the toys, much like children do when playing with their action figures. He not only photographs the clone troopers in scenes reminiscent to his work in real life, but he gives them a voice through short stories. Much like the stories of real men and women in combat, these fictitious troopers in a science fiction world, are given brief vignettes detailing life as a soldier in their galaxy.

Inspired by what he is surrounded with every day as a Marine, Callahan uses what he has seen as a reference point when posing the characters and telling real stories and experiences. He also recreates iconic images, such as the one below from Operation Enduring Freedom in Afghanistan. In the image, Sgt. William Bee seeks cover as sniper fire creates an explosion of debris which inspired Callahan’s drone trooper version. 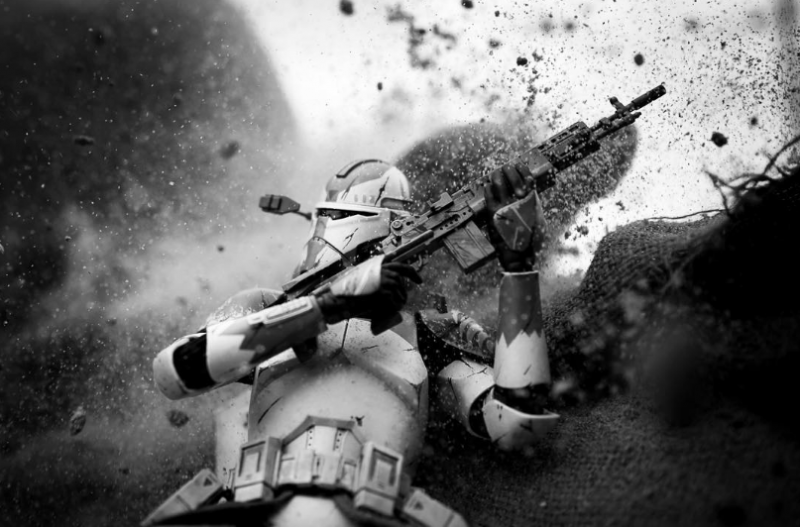 One challenge in toy photography that Callahan focuses on is making sure to pose the sixth scale figurines in ways that look realistic. He finds himself mimicking the position, making sure that his body, his imaginary weapon, and position is all in the right place so that he can pose his figures as humanly as possible. Though he uses Photoshop, most of his images are created in camera. As seen in the video interview by Joseph DiGirolamo about Galactic Warfighters below, Callahan’s friends will assist in creating the debris and dust flying around in his photos.

Callahan uses both Nikon and Canon bodies (as seen in the video – a Canon 5D Mark III and a Nikon D750) and prefers really wide or really long lenses to help him have more control of the background.

Behind the Photo: My last posted image,”Playing Jazz,” was a reimagining of the top photo I took in 2013 of the same name while I was in the Kingdom of Thailand. These Marines were set up in an improvised firing position during a live-fire company-level attack drill. Discernible difference being the choice of weaponry. Can’t get my hands on an M110 SASS 1/6. If anyone has a direction I can go to find one, let me know! #toyphotography #reallife #Marines #galacticwarfighters #recreation

CREDITS: Photographs by Matthew Callahan are copyrighted and have been used with permission for SLR Lounge. Do not copy, modify or re-post this article or images without express permission from SLR Lounge and the artist.