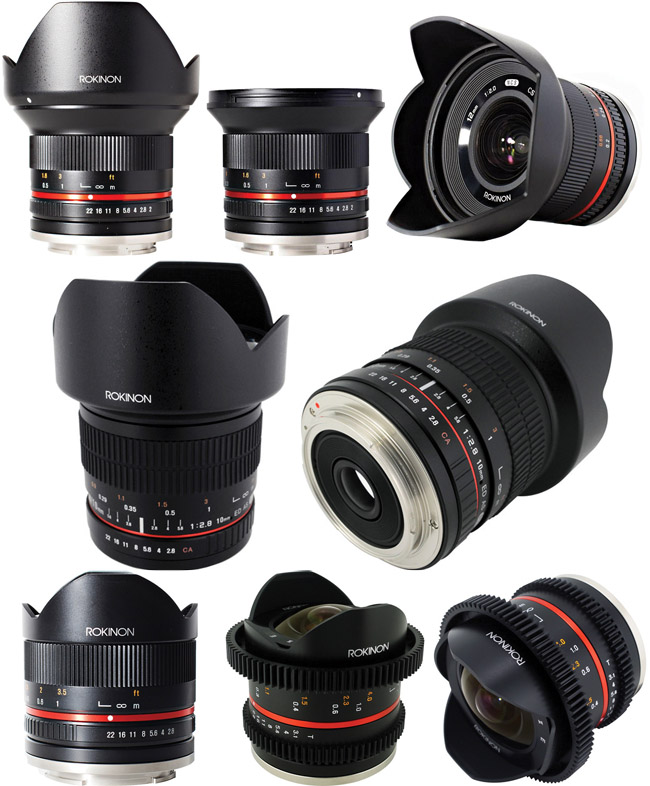 A couple wide angle “speed barriers” have just been broken, folks! What am I talking about? Well, Rokinon / Samyang / Bower have just announced new lenses, the most notable being a pair of crop-sensor / mirrorless lenses: The 10mm f/2.8 and the 12mm f/2.  After many rumors and “we’re working on it!” hints from Samyang / Rokinon over the past ~9 months, the babies are finally here! (And available as early as March 25th, less than a week from now!

Of course, while 10mm f/2.8 sets a new record for APS-C sensors, (the previous wide-and-fast speed record being held by the Tokina 11-16mm f/2.8 DX) …a 10mm prime on a 1.5x crop sensor is “only” equivalent to 15mm on full-frame, which is nothing new since full-frame sensors have had access to numerous 14mm f/2.8 options for many years.

Hopefully, as I predicted recently in this article here, because it is sharper and better built, but we’ll have to wait and see.

Also of note is the fact that Rokinon has started using a new acronym in their lens names, NCS which stands for “Nano Coating System”.  This might be part of the reason why the 10mm f/2.8 is so pricey? All I can say is, if this “Nano” coating is as voodoo-magic as Nikon’s own Nano lens coating, then any lens featuring it will be VERY sharp and have beautiful, crisp colors / contrast.

Why am I so excited about this announcement?  Sure, 12mm f/2 is “sort of” equivalent to 18mm f/2 on full-frame.  But if you consider the ISO and DOF advantages that full-frame offers, a more realistic way of looking at it would be to call it an 18mm f/2.8 or f/3.5 lens. Sure, you could buy the Nikon 18mm f/2.8 and adapt it to the Sony A7r.   But that kit alone would cost a couple thousand dollars more, and weigh about a pound extra.  (For example, the Rokinon 12mm f/2 mounted on a Sony NEX body might cost as little as $700 total, and weigh less than 20 oz!)  In other words, we’re making huge progress in the department of “portable and affordable”…

You can read more about all of the new Rokinon lenses in this article here, hosted by B&H. In summary:

I think it is safe to say that Rokinon / Samyang / Bower pretty much OWN astro-landscape photography at this point, especially going forward into the next generation of mirrorless systems.  Consider the options:

On full-frame, the Rokinon 24mm f/1.4 is killer.  The Rokinon 14mm f/2.8 has also proven to be similarly spectacular. While Canon and Nikon haven’t even begun to murmur about full-frame mirrorless bodies, Rokinon now offers fast wide angle primes that are directly compatible with the hot new Sony A-7r.  (Rokinon’s Sony E-Mount 14mm f/2.8 only lists compatibility with APS-C bodies, however we are currently inquiring about full-frame compatibility)

Next, there is the more recent Rokinon 16mm f/2, for traditional APS-C DSLRs.  Canon and Nikon have basically given up on such specialty lenses for their APS-C DSLR buyers, unfortunately, so the Rokinon 16mm f/2 is the only game in town.  (Aside from the Sigma 18-35mm f/1.8, which is well worth it if you don’t mind the difference between 16mm and 18mm)!

Now, as of today, both 2x and 1.5x crop mirrorless formats have access to 12mm f/2 and 10mm f/2.8 lenses, with what will most likely be stellar image quality considering Rokinon’s track record plus their new NCS optical coating.

I’m never one to count chickens before the eggs hatch.  Any of these new lenses could fail to deliver good sharpness, or could have other significant drawbacks that we don’t yet know about. The smartest thing to do is to wait a few months and see what the reviews say.  Speaking of which, we will certainly be sharing our opinion on these new lenses when they hit shelves in a few days, on March 25th!