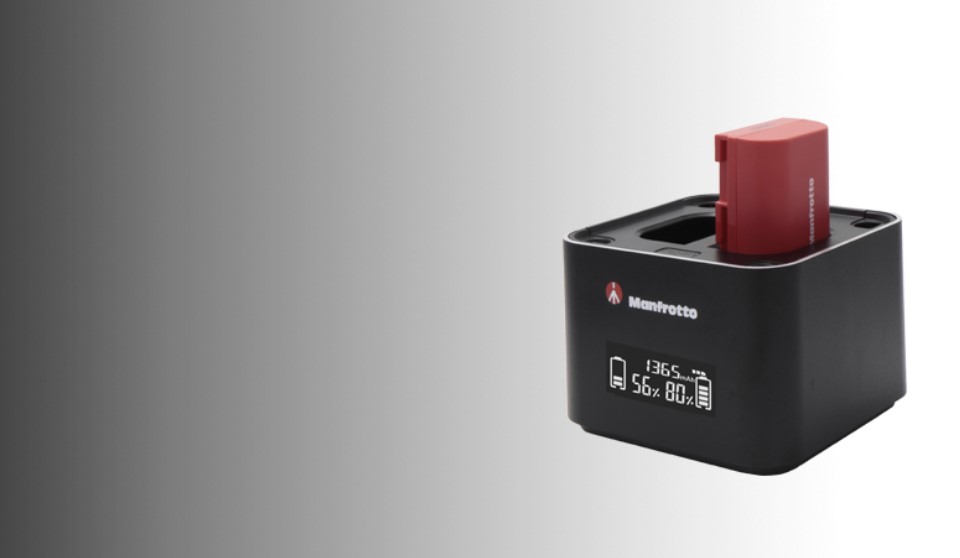 Today, Manfrotto has announced a totally new product line: batteries and chargers! Their Pro CUBE Professional Twin Charger ($79.99) comes with two camera battery ports for Nikon, Canon, and Sony batteries, as well as an attachment that allows the charging of four AA batteries. Their batteries, the E6N and EL15JP, are made for Canon and Nikon DSLRs, respectively.

The Pro CUBE charger is equally robust, with a metal housing, and unlike even the name-brand chargers, which only charge one battery at a time, the ProCUBE displays a percentage charge for each camera battery!

NOTE: We reached out to ask whether or not Manfrotto plans to make Sony NP-FZ100 style batteries, too. Their official response is that if it is possible for them to create one of high enough quality to match Manfrotto’s standards, they’ll make it happen. So, stay tuned!

Scroll down for the official press release, as well as our initial thoughts. 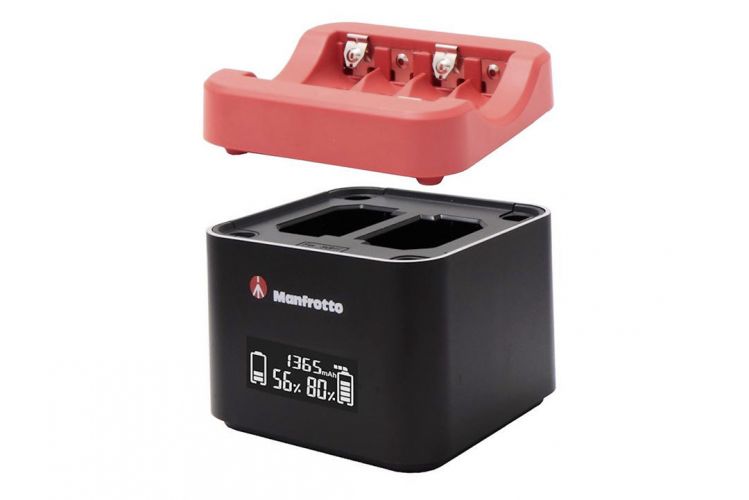 Vitec Imaging Distribution, world leader in the photography and videography, imaging equipment and accessories industry, announces their new range of batteries and chargers – the first they have produced.

Exclusive to the US, Manfrotto batteries and chargers go above and beyond the standard offerings currently on the market. With faster, more efficient charging and higher quality batteries, the Manfrotto Professional li-ion batteries deliver additional capacity, extra performance and ultimate reliability. The best UL approved cells have been carefully selected to ensure an extended life cycle, performance and safety.

Think all batters are the same? Think again. The Professional li-ion batteries have been built to withstand tough environments and extreme field conditions – each battery has been injected with silicone giving them a shock-absorbing construction, superior circuit protection and additional electrical insulation. They are drop proof up to 9ft, so you know you can rely on them whatever environment you are in.

It isn’t easy to replenish two batteries at the end of the shoot as cameras are only supplied with the means to charge one. The Manfrotto ProCUBE will give you the capability to charge 2 batteries at
the same time. It features a sturdy metal shell and interchangeable plates that each accept a pair of batteries as well as a plate for charging four AA batteries. The battery holders simply clip into place, whilst the AA plate fixes magnetically onto the top of the unit. The Manfrotto ProCUBE is an essential piece of kit for professionals who use multiple cameras from the same brand.

The easy to read LCD display shows the charging status of each battery as well as a battery health check, and the USB Power Source and Car Charging Cable means you can charge wherever your shoot takes you. US, Euro and UK plug adapters are also included. 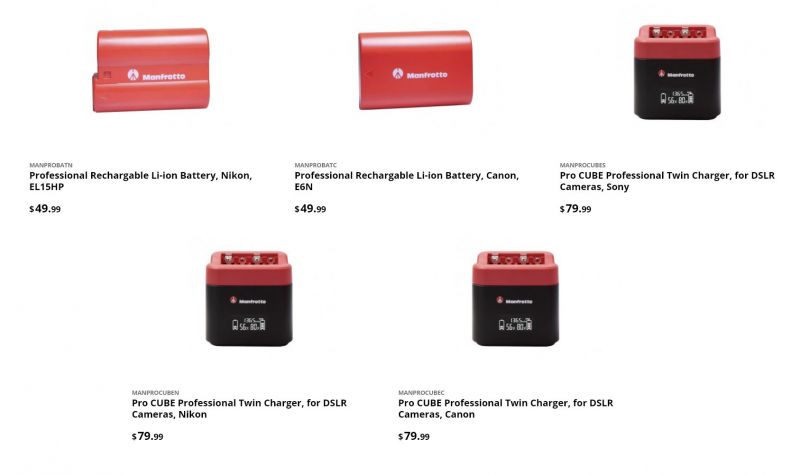 Our Reaction To This News | Manfrotto Is Known For Their Quality; We’re Excited!

Those of us who have been into photography for a decade or two (or three; anybody remember the days of “Bogen-Manfrotto”?) …will know just what a potentially high-quality brand name Manfrotto can be. Indeed, virtually all of their tripods, light stands, and other accessories are the gold standard for indestructible durability, a lifetime of surviving heavy abuse…

The first thing that comes to mind is, that shopping for third-party batteries has always felt like a game of Russian roulette to us, especially as full-time wedding photographers. We absolutely need our camera batteries to last for a thousand clicks or more throughout a wedding day. Or, at the very least, we absolutely need to know that our batteries’ capacity, whatever it is, doesn’t drop unexpectedly after just a few months of use. It is one nightmare for modern battery-hungry mirrorless camera users to show up to a wedding or other long day with three or four batteries, only to have them start dropping like flies. (Jumping from 90% remaining to 20% remaining suddenly, or going from 30% to completely dead in just a few clicks, etc.)

So, again, if Manfrotto is putting their name on a camera battery, it’s probably going to be a high-quality, reliable product, which is something the third-party battery market is certainly lacking. 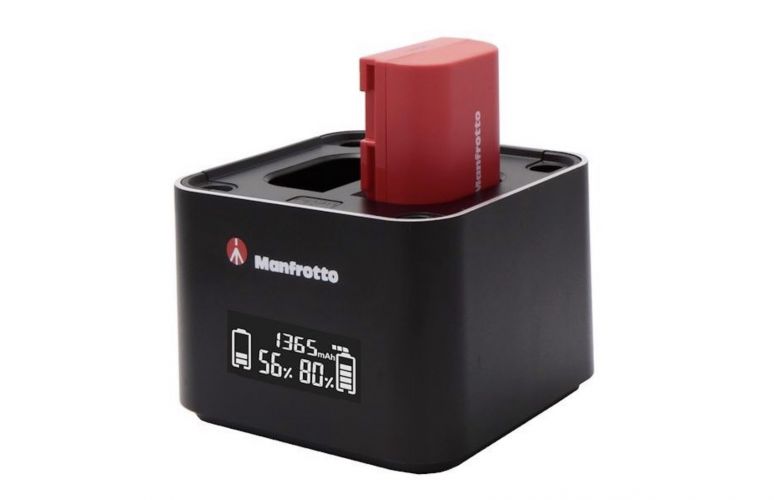 The same thing can be said for chargers: There are new small-time, no-name brands popping up on Amazon and eBay literally every single day with products like compact USB-powered battery chargers for cheap, and unfortunately, the vast majority of them are just terrible quality products. From the plastics used to the wiring and circuits, you’re often buying something that is basically disposable. Manfrotto would surely be the polar opposite of this; we can only predict that a Manfrotto battery charger will be just as rugged and durable as many of their other legendary product lines.

Unfortunately, at present, the only two batteries offered are the Canon LP-E6 style and Nikon EN-EL-15 (older style) batteries. This means that, due to Canon and Nikon’s rather strict protocols in communicating with off-brand batteries, you’ll probably have to “confirm” use in newer Canon camera bodies, and Nikon may actually completely block use in their latest mirrorless cameras, even. We can maybe hope that a Sony NP-FZ100 style battery is also on the way; third parties seem to be able to make those with the only issue being a lack of a 1-100% battery life meter like name-brand ones offer.

In conclusion, this is nothing but good news, aside from the compatibility limitations with the latest-and-greatest Canon and Nikon full-frame mirrorless cameras. We’re looking forward to getting our hands on this new product line to test it out and give you a full review soon! It might just get on our recommendation list of relatively affordable Christmas presents for photographers! Stay tuned for more real-world experience and thoughts.

Loupedeck Announces Collaboration with Adobe on New Plugin for Photoshop