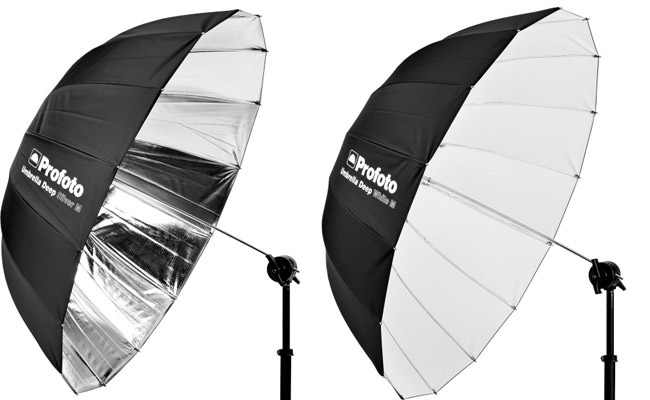 OCF Basics | How And Why To Use An Umbrella

Umbrellas are things that most of us became familiar with at a young age. Accompanying rain boots and jackets, they keep rain from ruining hair-dos, splattering clothing, and drizzling on parades. Somewhere along the line, a great innovator realized the potential for umbrellas as a light modifier, and every photographer’s first flash modifier was born.  The umbrella is is one of the most powerful light modifiers you can get and it’s incredibly inexpensive.

Why Use An Umbrella in Photography?

Umbrellas come in many shapes and sizes and are a popular choice for both studio and location photography. Deep, parabolic, shoot-through, bounce, enormous, pretty small – there are many options for many uses.

Umbrellas are incredibly versatile, the garden-variety are inexpensive, they’re portable and simple to set up. While a traditional softbox must be assembled by sticking slightly flexible spokes into a speed ring and attaching inner and outer diffusion material, an umbrella just pops open in an instant, exactly like the ones meant to protect from wetness outdoors. Achieving soft light couldn’t be simpler than with an umbrella.

A note about umbrellas though: they aren’t a tool of precision. Rather, they will scatter light all around, so that’s something to consider when deciding if an umbrella is the right device for the job. 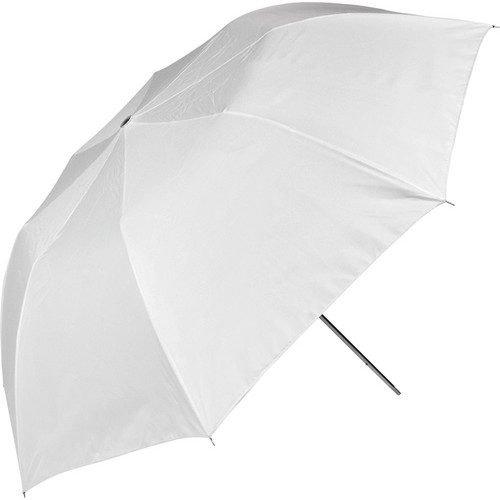 An Umbrella In Use

Let’s take a look at an umbrella used with a speedlight on location in action. For this urban nighttime couple’s shoot which we dive into in full detail in our Premium tutorial, Lighting 201, a 43” Westcott umbrella fits the bill. Its portability made it a good choice for carrying to the location, and the scattered light of an umbrella worked to illuminate some of the area around the couple.

Going into a shoot with a vision makes a huge difference, and this shot was envisioned to be taken with a wide angle lens from a low angle, with the cityscape behind the couple providing context and leading lines. To make this vision a reality, the couple was posed up a flight of stairs from the photographer, our own Pye Jirsa.

The lens for the job was Canon’s 24-70mm f/2.8L II, used at its widest focal length to capture the large buildings for environment while keeping the scene fairly sharp when shooting wide open at f/2.8. Shooting wide open with a higher ISO of 800 are needed to let in plenty of light from a small flash. 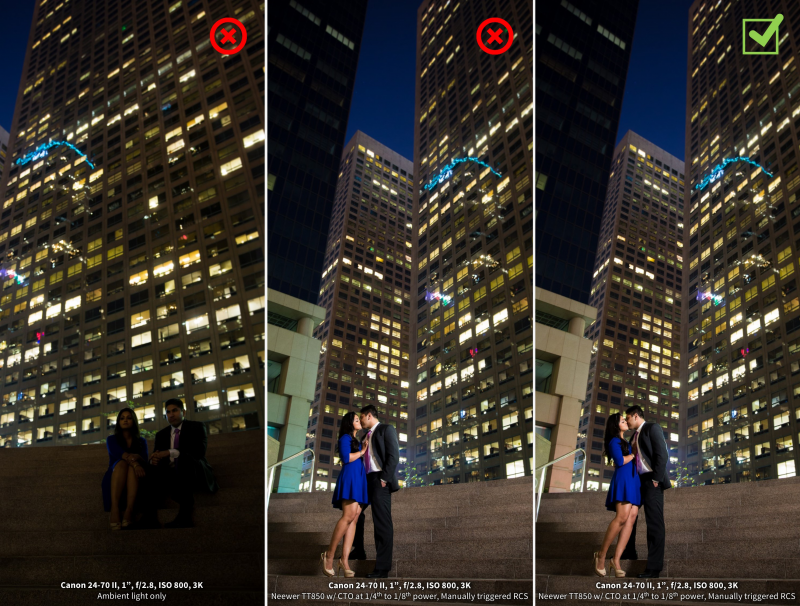 With framing and lens choice taken care of, we move on to lighting and method of capture. The light used was an inexpensive manual Neewer speedlight with the aforementioned Westcott 43” shoot-through white umbrella held on a light stand by an assistant.

The speedlight is attached to the stand via a standard umbrella bracket – a piece that sits on top of a light stand with a cold shoe on top to hold a flash and a small hole underneath to put an umbrella shaft through to hold. The assistant is holding the light higher than the stand will reach, but another important reason to use an assistant with an umbrella outdoors is that they can quickly become a sail when with a breeze. No assistant? Drag along a sandbag. You may bemoan the excess weight, but not as much as you’d hate a broken speedlight because the wind whisked yours away and came it crashing down. 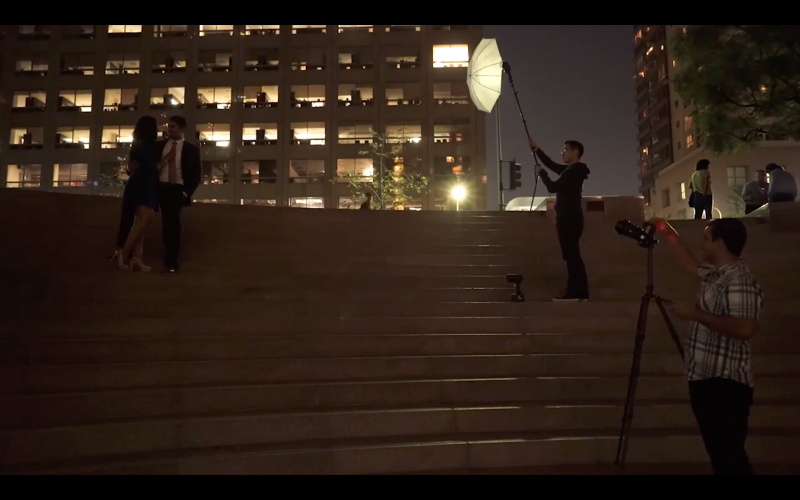 Note the distance from the flash to the umbrella – you want to make sure it’s pulled back far enough to ensure the umbrella is filled with light. Too close, and you’ll only be illuminating a small portion in the center of the umbrella, effectively making your umbrella a smaller light source. On the same note, manually zoom the flash as wide as it will go to help spread the beam.

Rear curtain sync was desired, in order to enhance any movement the couple made during the 1-second exposure used to let in ambient light in a dark scene. However, the Neewer flashes being fairly basic, rear curtain sync off camera wasn’t an option, at least when used as directed. Where there’s a will, there’s a way though. Rear curtain sync can be used during a long exposure with flashes that don’t have this feature – manually. To do this, take the trigger off the camera and hold it in your hand. Start the exposure and simply pop the flash via the handheld trigger toward the end of the exposure. It’ll likely take you some practice to get the timing right, but it can be done.

To enhance the deep blue dusky sky, a combination of a CTO gel on the flash and a manual white balance in-camera of 3K were used.

One thing to keep in mind when it comes to an umbrella is that you do not have a ton of light control. Umbrellas kind of spill everywhere and they kind of fill everywhere. There’s not really a shape to them, they just open up and of course, wherever it’s pointed is going to be it’s brightest point but it’s going to fall off and kind of light that entire area. For this scene, I’m not really worried about that. For this scene, I don’t really care about that. I like the fact that there at the brightest point we have a little bit of light on the staircase and e have a beautiful shadow and everything like that but if I wanted to put the light just in one specific spot, then the umbrella would not be the right tool. In this case, it’s absolutely fantastic. When we want the light to open up and fill an area, the umbrella is an amazing tool.

So now you’ve seen what one cheap little umbrella can do. You can learn even more off-camera flash tips and tricks in our Premium tutorial, Lighting 201.

Since the season of rain and snow is officially here we have chosen the humble umbrella to be the star of the new COOPH video! It’s an object you can find in every home and one that you use regularly too.

In this video we show you 5 great tips to take epic photos with yours. Check it out and next time you are out with your umbrella why not try out one of our ideas!

For such a short video, there’s a lot of tips to get inspired by. From using a “regular” umbrella, gaff tape, & smoke bombs, to some unique uses of “photography” umbrellas, there’s something in here for pretty much any style. Have a look and let us know if you picked up something new or have tried it out before. If you have some other umbrella tips, let us know in the comments below and be sure to share some of your work!

Nikon D780 Review - The Best DSLR, In A Mirrorless World