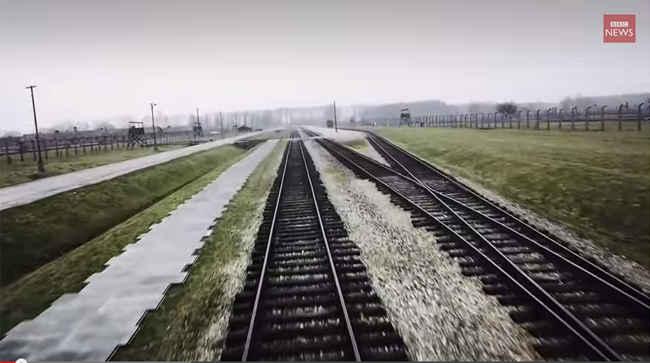 “One minute in Auschwitz was like an entire day. A day was like a year. A month, an eternity.” Roman Kent, Holocaust survivor.

70 years ago this week, the Auschwitz-Birkenau concentration camp was liberated by the Soviet Red Army after years of unspeakable horrors. The world remembers one of its darkest times in history and this is the last major anniversary event for many of the survivors of the death camp. Between the years 1940-1945, approximately 1.1 million people, mostly Jews, were murdered in this extermination camp.

The following video is a haunting and very moving look at Auschwitz, 70 decades after the captured were set free. The 2.5 minute drone video swoops over the empty and silent camp that held unimaginable pain and sorrow for so many. I watched the entire video with chills and tears in my eyes as I pictured the hundreds of thousands whose lives were torn apart and also for the other 5 million Jews and persecuted who lost their lives at other camps such as this one.

The video begins with a sweeping view of the entrance to the camp, a long, endless railroad track that brought victims each day – for many of them, their final destination on this Earth. The thought is chilling. Watching the video, I am reminded of a book I read a few years ago, Man’s Search For Meaning, by Holocaust survivor, Viktor Frankl. In it he documents his experiences at the Auschwitz camp and how he survived after being yanked away from his wife and children. Seeing the places where this man watched his friends die one by one, as he plotted his escape, as he fought to live and as he was freed…it’s powerful.

There is also a longer version which is twice as lengthy which you can see here.

How To Define Your Studio Policies {And Why You Should Stick To Them!}