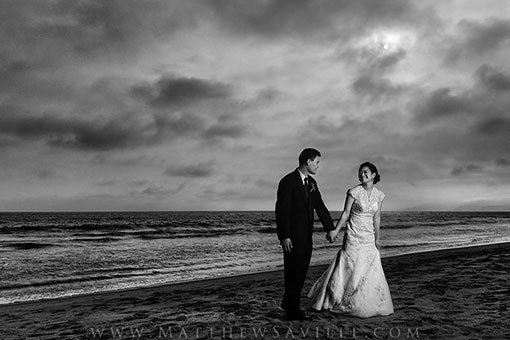 Alright, it’s time for a new series!  Welcome to “Getting The Shot” with your camera-geek host, Matthew Saville.  Actually, the goal of this series will be to explain photographs in a NON-geeky way.  Instead of going crazy with techno-babble and assumptions of reader skill level, these articles will focus on three simple things:

1.) The creative thought process behind the image
2.) The technical aspects that made it happen
3.)  Things that could be improved

Alright, so let’s get started! 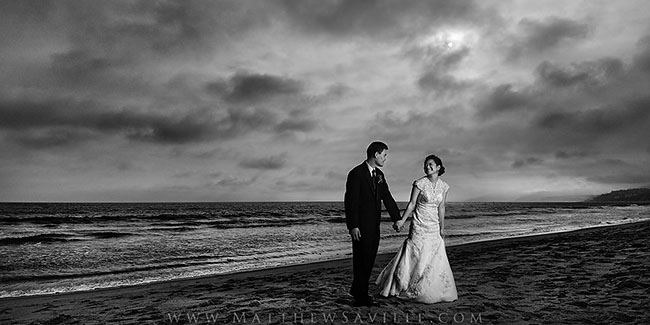 The Creative Thought Process:
It was an overcast day but the sun was just barely peeking through the clouds from time to time.  I knew I wanted something dramatic that captured the cool clouds and the open expanse of the empty beach.  So I composed the shot horizontally and anticipated an even more panoramic crop.  I placed them center-right, and made sure that their heads weren’t intersecting the horizon, I wanted to give them prominence in the photo.

The Technical Aspects:
If I had just used natural light, either the sky would have been all white, or their faces would have been totally dark, …or I could have turned in the other direction and used the brighter side of the sky to light their faces, but then the sun wouldn’t have been in the photo.  So I set up two flashes on my right and triggered them wirelessly using some simple radio triggers.  Both flashes were in the same spot, turned up pretty high, just bare flash.  Gear used:  Nikon D300, Nikon 12-24 DX, Nikon SB800 x2, Scott Robert Tiny Triggers.  f/13, 1/250 sec, ISO 200.  RAW image with lots of burning & dodging in Photoshop CS3.

Improvements:
In retrospect, I wish I had a third flash to put on my left-hand side, to illuminate the bride’s face a little bit more. 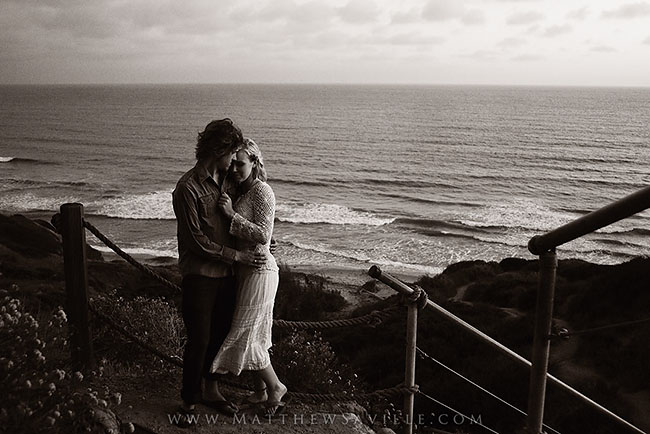 The Creative Thought Process:
After finishing up this engagement session, we were walking back up the hill and this vista just caught my eye.  The light was fading fast, but beautifully soft and natural.  I knew that I wanted to go for a quiet, intimate moment with a slight faded look.  Thus, I opted to just shoot all-natural, hand-held at whatever ISO would get the job done, and go for in-camera B&W just to see how it looked.  I composed them on the left-hand “rule of thirds”, and paid attention to various other lines as they came in and out of the photograph.

The Technical Aspects:
I knew my options were running out and I would have to make some compromises to get the quiet, intimate feel I was going for.  No flash would equal dark shadows, but that was fine with me, this was supposed to be a candid, spur-of-the-moment photograph.  Since I was shooting at a wide angle, I knew I could get away with slower shutter speeds if I was VERY steady.  Gear used:  Nikon D300, Nikon 24mm f/2.8 manual focus.  f/2.8, 1/30 sec, ISO 800.  RAW image exported straight to JPG from Nikon View NX2.  (So that’s the in-camera B&W, “zero” photoshop!)

Improvements:
I wish I had gotten another shot where I backed up even more, or shot at a wider angle, to encompass even more of the beautiful view and increase the “sense of place”.  But the closeness of the shot also works…  I did take ANOTHER SHOT that was even closer, which also worked well.