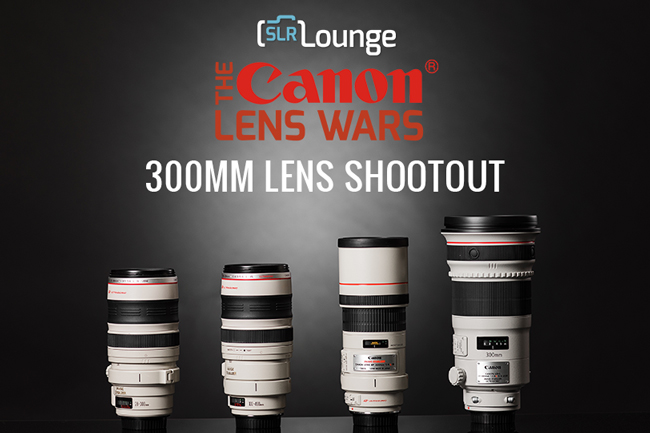 Welcome to our final video in the Canon Lens Wars series. This is the 300mm lens wars, and we have 4 lenses that we will be comparing:

Let’s start from the top with their aesthetic quality and sharpness at their respective Wide Open Apertures (WOA). Once again, this is a visual test of differences, not a technical test. So, we are trying to distinguish differences in appearance while viewing images full screen on a Dell U2713HM 27″ IPS monitor.

The funny thing about this focal length was that I think I had the toughest time trying to differentiate the images between these 4 lenses. It took several rounds of flipping through the images before I was able to really tell apart the Canon 28-300mm f/3.5-5.6L and the Canon 100-400mm f/4.5-5.6L as I noticed they had slightly smaller and less defined bokeh as their WOA was at f/5.6. 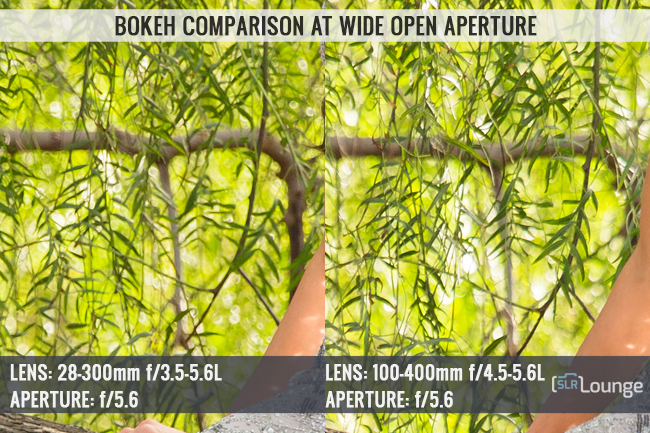 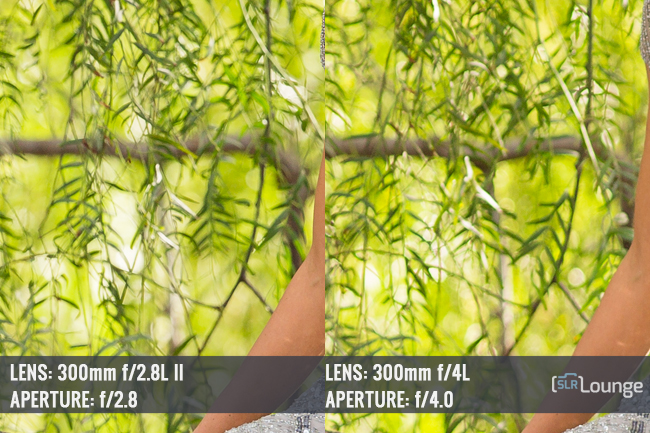 But aside from that, these 4 images looked pretty similar to each other.

When I zoomed in, the difference in sharpness became much more noticeable. Around our model and her dress, I noticed that compared to the other lenses, the 300mm f/2.8 at its WOA of f/2.8 was absolutely tack sharp! 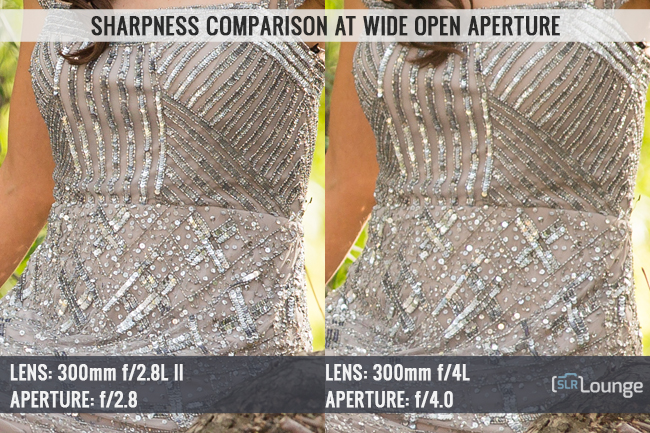 As for our two zoom lenses, it was hard trying to figure out which was sharper between the 28-300mm and the 100-400mm, but one thing that is for sure is that both zoom lenses’ image are not as sharp than the 300mm prime lenses. 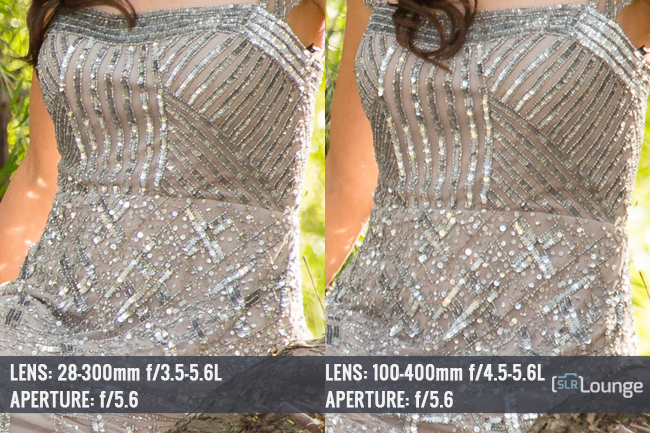 Likewise, even the edge sharpness on the300mm f/2.8 was absolutely incredible compared to the other 3 lenses. Then again, you are talking about a lens that is approaching $7000 dollars, so it better be sharp everywhere! 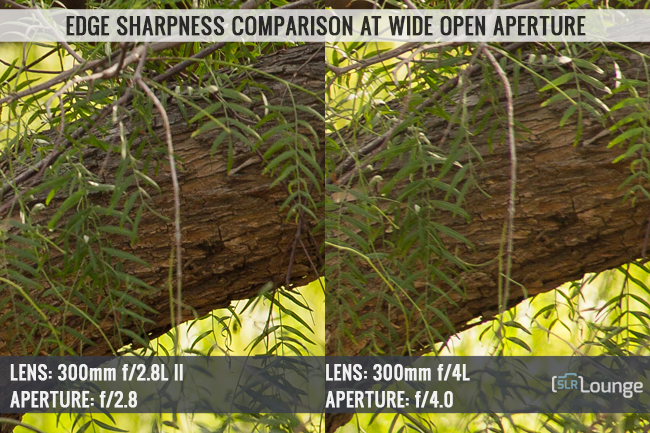 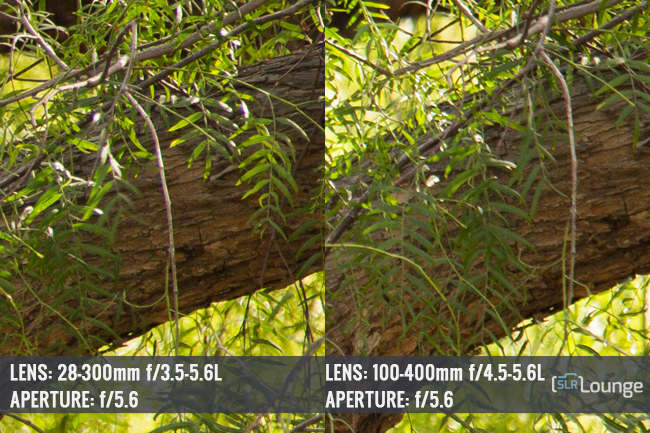 At their Widest Common Aperture (WCA) of f/5.6, visual differences in bokeh dropped away for the most part. As you can see from the set of image below, it is hard to distinguish which lens has the best bokeh. 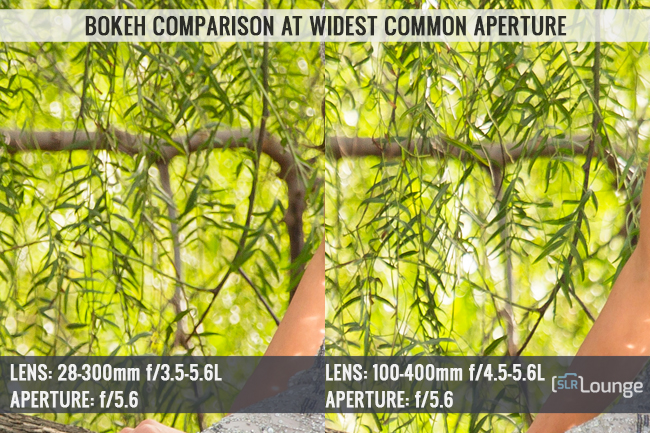 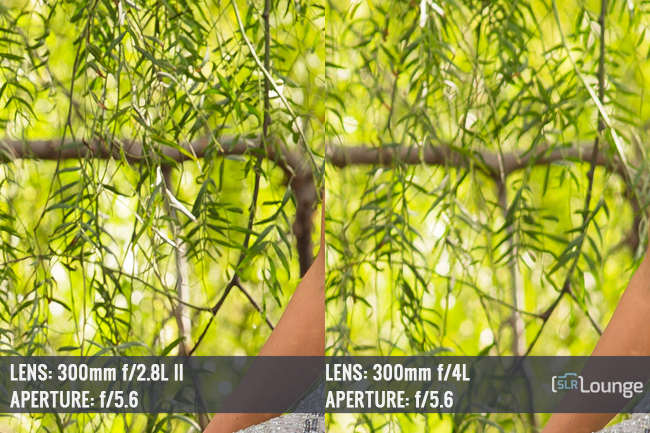 For the most part, the aesthetic quality of the bokeh for all 4 lenses was equalized at and beyond f/5.6

In addition, because the 28-300mm’s widest open aperture at the 300mm focal length is also at f/5.6, it exhibits some lens vignetting that actually suited our image.

Still, it was significant vignetting compared to the other lenses, including the 100-400mm whose WOA is also at f/5.6.

Finally, looking at the images at full screen at f/5.6, although their sharpness quality is fairly similar to each other, the 300mm f/2.8 was still noticeably sharper.

So just like the similarly expensive Canon 200mm f/2L, once again we have another highly specialized lens that is also large and in charge. You will also need a monopod in order to keep this lens stable.

Also like the 200mm f/2, I can really only see this lens as being a justifiable purchase if that extra stop of light is required for very specific shooting situations like sports photography or wildlife photography.

Now, for $1,449, you can get the Canon 300mm f/4L with Image Stabilization, which will give you that 300mm focal length and pretty good low light performance.

This makes it probably the best deal in the 300mm lineup in terms of overall image quality, aesthetic quality, and performance and this is the one in the group I would recommend.

But their real advantage is in their versatility, not in their image quality. Compared to the 300mm primes, these two zoom lenses are not as sharp and they do not offer the same aesthetic quality of the bokeh.

So, you have to decide if the convenience of having less lenses is worth the overall reduction in performance.

We have one final note on these lenses. All four lenses do posses Image Stabilization, which is definitely needed when shooting at the 300mm focal length.