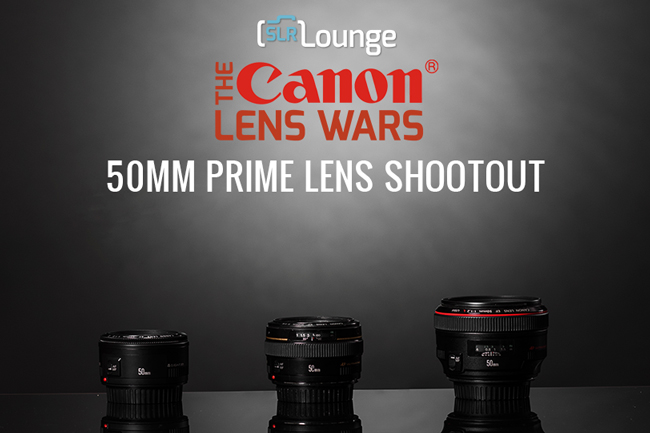 Welcome to Part 1 of the 50mm focal range of the SLR Lounge Canon Lens Wars series. We have 7 lenses in this grouping, so in this first part, we will be discussing just the 50mm primes.

In part two, since we are using the same zoom lens setup as in the 35mm focal range, we will briefly talk through the zooms, then compare them to the primes.

Aesthetically speaking, if we are looking at which lens produce the creamiest and most bokeh-licious bokeh, as well as the sharpest image at wide open aperture, then it’s easy to say that the Canon 50mm f/1.2L is the clear winner.

Of the three 50mm primes we tested, not only did the 50 f/1.2L had the most bokeh, but it also had the best aesthetic quality to the bokeh which can be seen in the samples below. 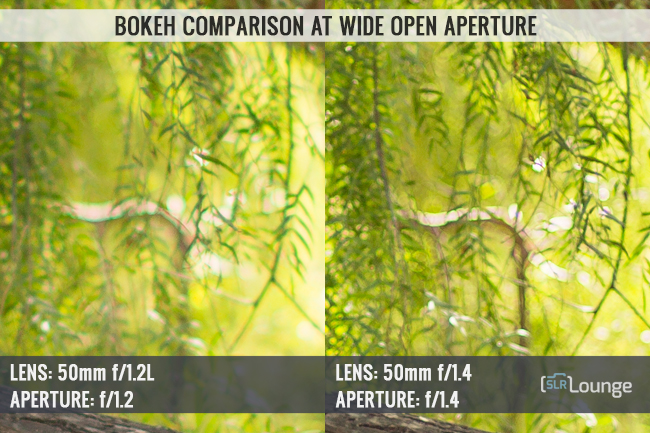 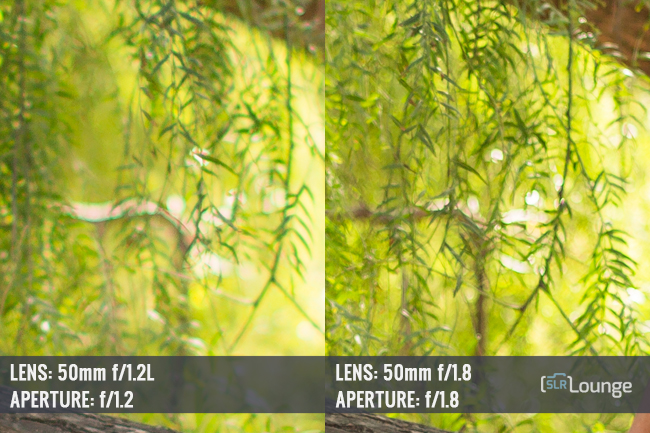 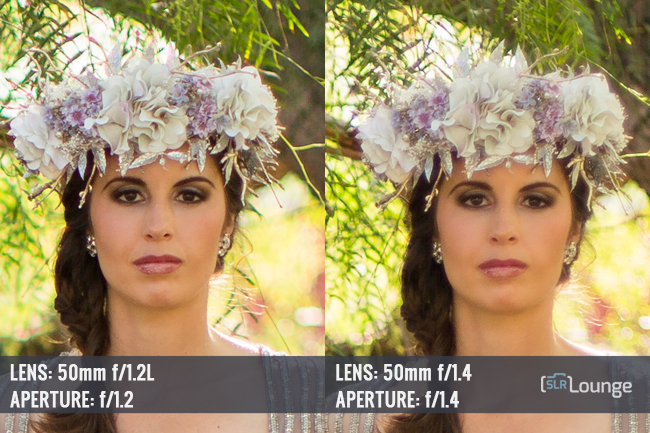 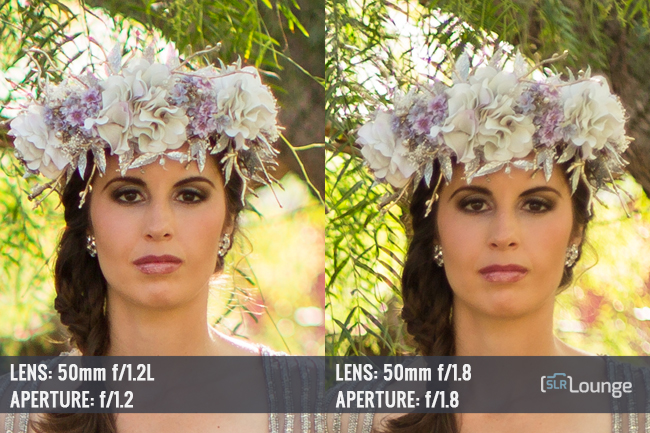 Moving on to the next most expensive 50mm prime, we have the Canon 50mm f/1.4, and unfortunately, this lens left me feeling a little underwhelmed.

[Free Tutorial: Make Sure You Know These Lightroom CC Features]

The problem with the Canon 50mm f/1.4’s image quality and bokeh was that it was too hazy and dreamy. The overall image was so soft that I would say it that the lens is not really usable at wide open, unless you are looking for that soft dreamy vibe. It almost reminds me of smearing the lens with oil or vaseline for a soft focus effect. 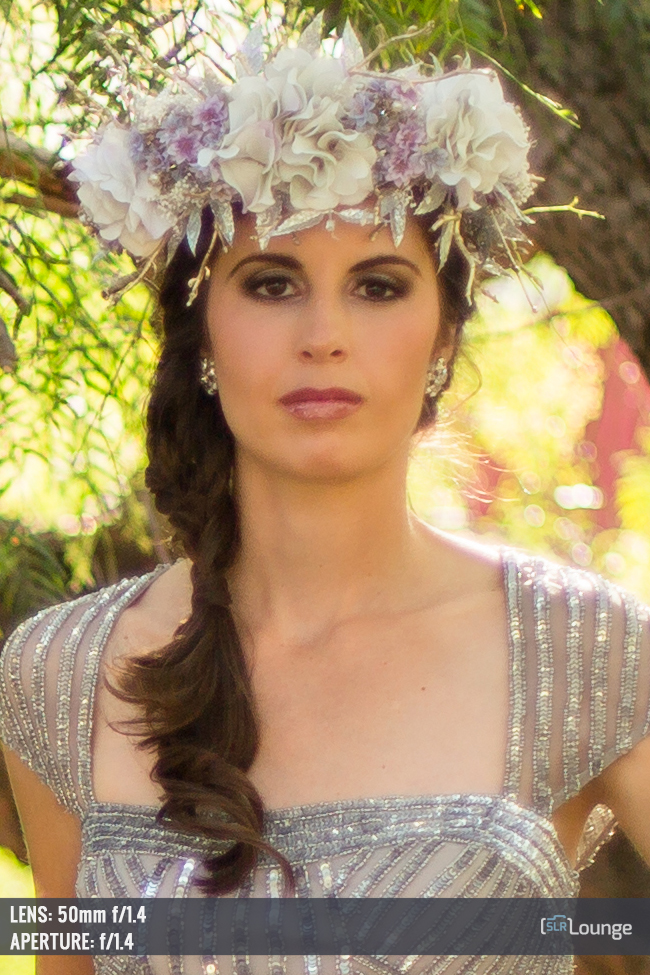 In addition, with both the Canon 50mm f/1.8 II and the f/1.4, there was something just a bit “artificial” about their bokeh. This was particularly noticeable when zooming in over the tree branch area. 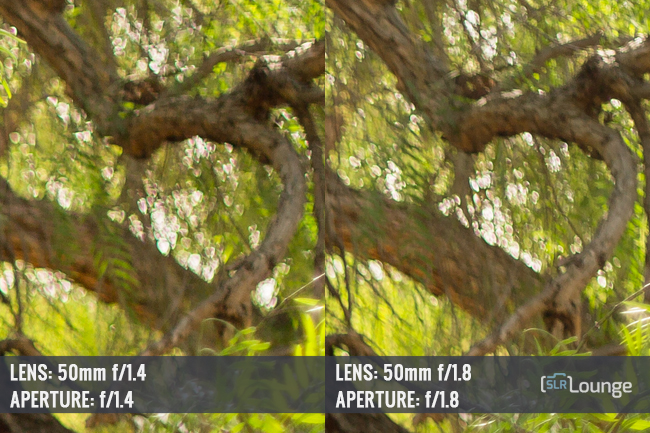 In comparison, the 50mm f/1.2L had a better and smoother bokeh rendition seen below. 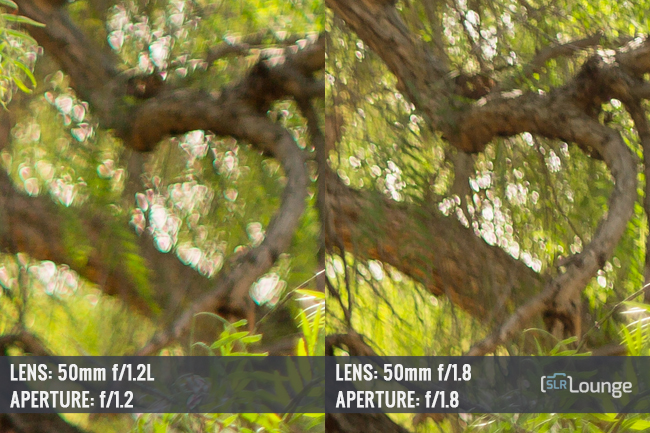 Surprisingly, of the 3 lenses, my second favorite was the Canon 50mm f/1.8 II. While it did have a bit less bokeh at f/1.8 than the other two 50’s, at least its image was not unusably soft. It was still a bit soft and dreamy looking, but not close to as bad as the 50mm f/1.4. 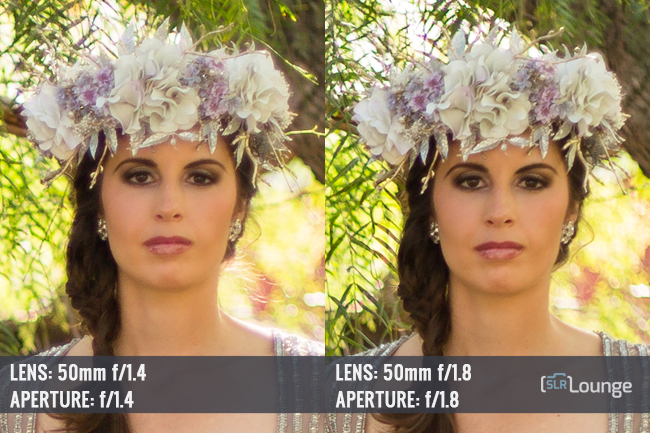 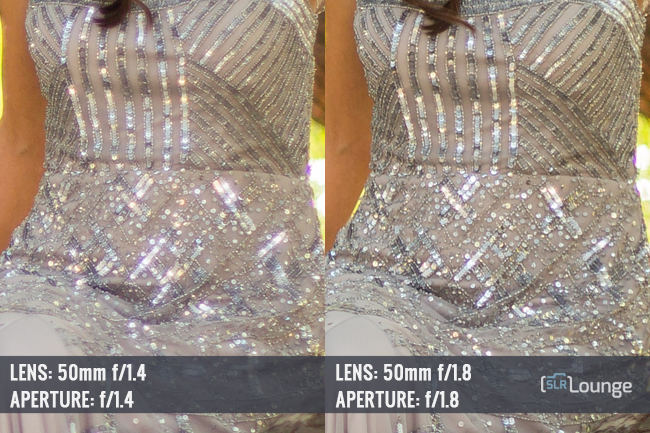 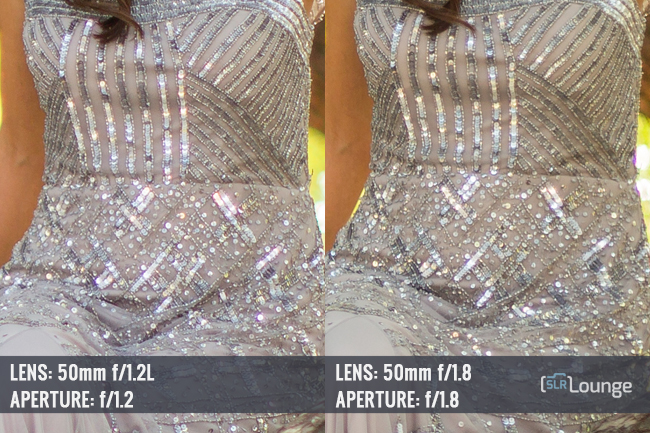 Let’s step up to the the aperture of f/2.0 and see how they all fare in regards to sharpness. Here, you can start to see the Canon 50mm f/1.4 pulling away from the 50 f/1.8 in terms of sharpness. 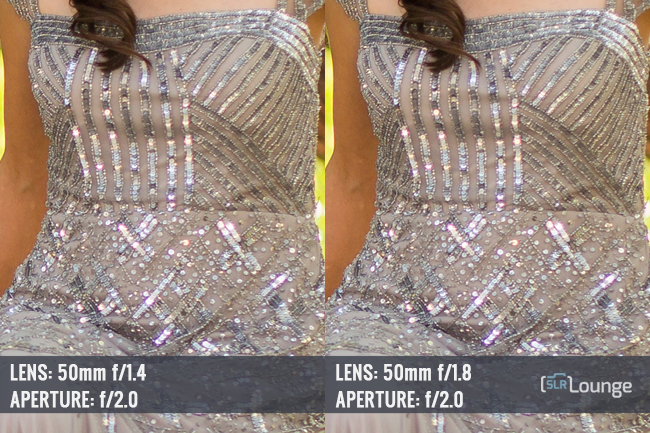 However, the overall winner is still expectedly the Canon 50mm f/1.2L, which is tack sharp over our subject as seen below. 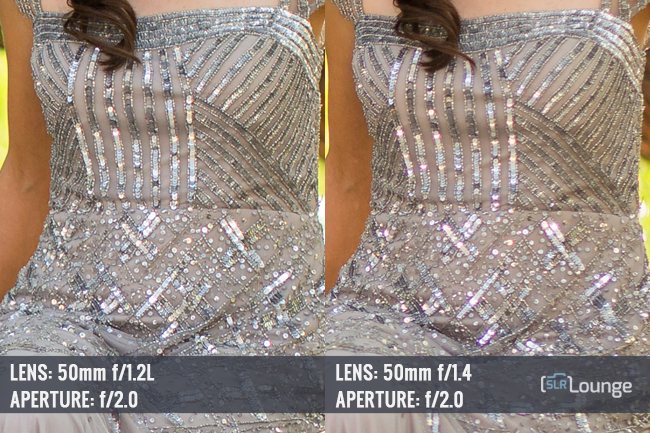 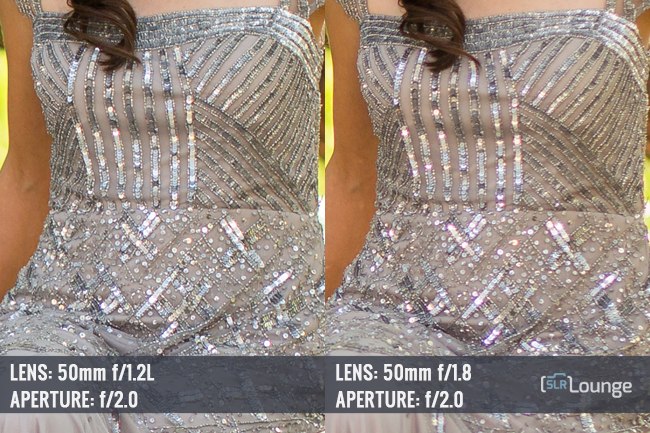 While the 50mm f/1.2L always remained a step ahead of its lesser siblings, we did notice that the visual differences in image detail and sharpness start to equalize at around f/4. Although color rendition is still noticeably better, as we would expect, on the L series lens. 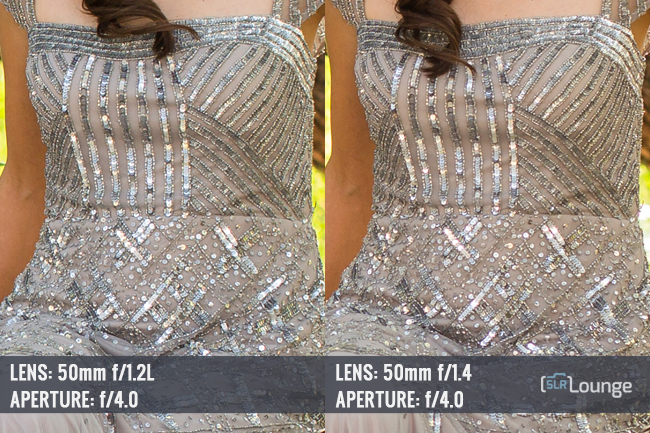 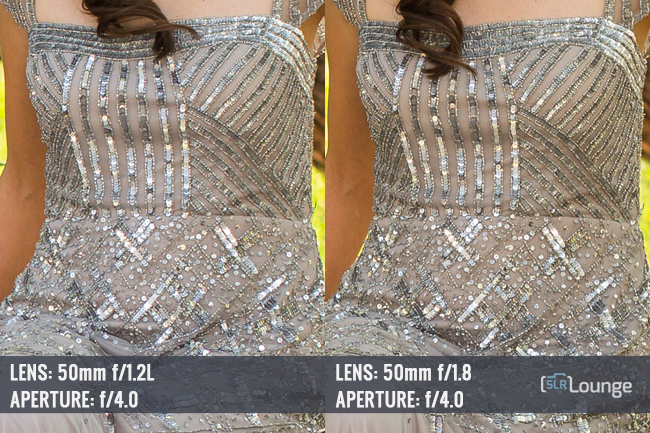 Going back to the common aperture of f/2, the Canon 50mm f/1.2L still renders more bokeh, and with better aesthetic quality to its bokeh, although not by a huge margin. The bokeh on the 50mm f/1.2L was just a bit larger and smoother than that of the 50mm 1.4 and 50mm 1.8. 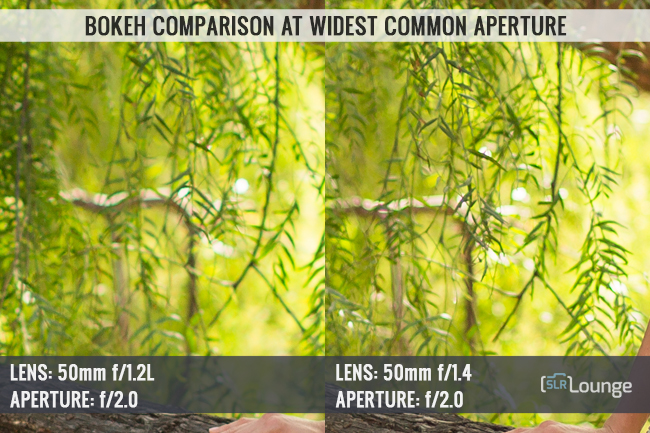 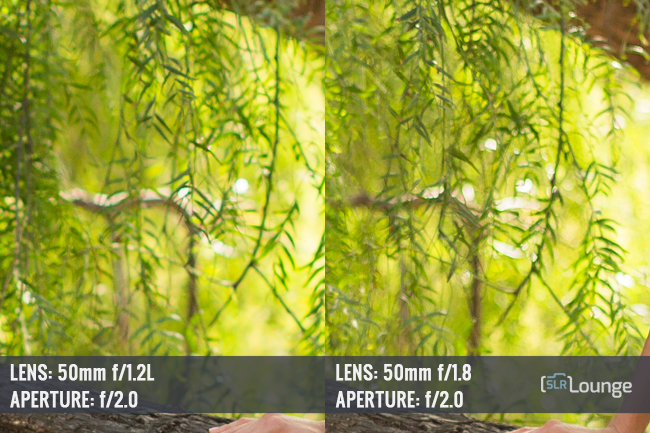 The Canon 50mm f/1.4 did have a bit more pleasing bokeh than the 1.8, but not by that much. It certainly wasn’t noticeable when viewing the images at full screen. 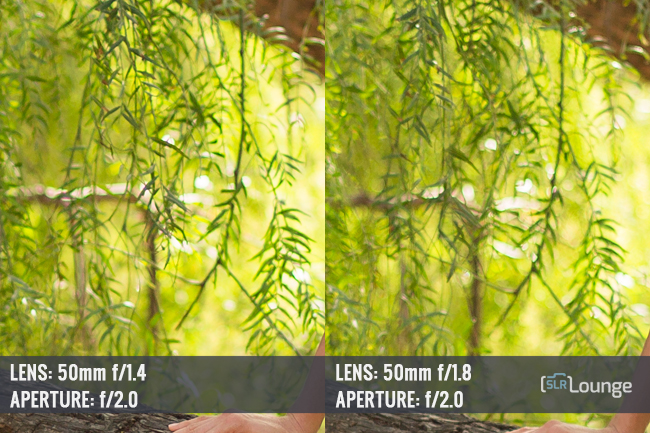 Just like sharpness, the majority of the aesthetic differences in bokeh equalized around f/4 for the three 50mm primes as can be seen in the following images. 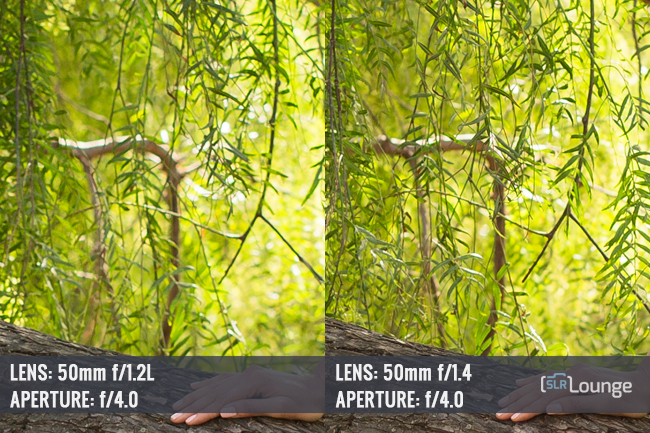 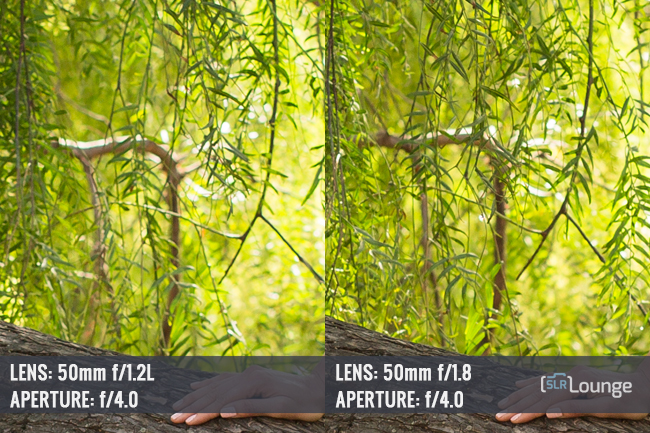 A Note on Build Quality for each Canon 50mm Prime Lens

This is one of those times where I want to also mention the feel and build quality of each of these lenses. The Canon 50mm f/1.2L really sets the standard between the three 50mm primes. It has a great build quality, feels nice, has a smooth focus action, and is exactly what you would expect from a Canon L lens.

As for the other two 50mm primes, the 1.8’s and the 1.4’s build quality leave a lot to be desired. I do not think most of us have a lot of expectations for quality on the Canon 50mm f/1.8 II because it is quite cheap. At around $125 (sometimes even less), it has been given the name of the “nifty fifty” because it is cheap and takes great pictures. So it is not a surprise that it feels cheap and “plasticky”, that the focus action is not smooth, that it makes funny noises, and that is not easy to to nail your focus when shooting wide open. But, all in all, still a great value for the money.

By comparison, the Canon 50mm f/1.4 is just that much more disappointing because although it is 3-4x more expensive than the 50mm f/1.8, its build quality and overall image performance doesn’t come to justifying the additional cost.

In addition, it was also quite difficult to get the camera to focus where I wanted with the 50 f/1.4. This is something that can be expected with the 50mm f/1.8, but it is not what I would expect from the more expensive 50mm f/1.4.

So, here is the final conclusion between these 3 lenses

The Best Bang For Your Buck – The “Nifty-Fifty”

So if you are looking for a standard 50mm prime, the Canon 50mm f/1.8 II is going to be the best bang for your buck by far and the “go-to” 50mm lens for beginners.

The One to Avoid – The “Shifty Fifty”

Even though it has a maximum aperture of f/1.4, its overly soft image quality at wide open nullifies that extra half stop advantage. And if you stop down to f/1.8 or f/2.0, then there really not enough aesthetic difference in appearance to the 50mm f/1.8. On top of that, its build quality is barely any better than the 50mm f/1.8.

The Canon 50mm f/1.2L is without a doubt the best 50mm prime lens from Canon. When you want a 50mm for low light, for ultra low depth of field, and for shots that you would not be able to get otherwise from the other 50’s, then save up your money, skip the 50mm 1.4 and just jump straight to the Canon 50mm f/1.2L.

At around $1600 bucks, it is far more expensive than the other two 50mm primes, but at least it does a lot more as well. It is actually sharp and usable when wide open and it can open up a full stop brighter than the 1.8. This prime lens gives you more creamy bokeh and just more bokeh in general. It’s price is actually justifiable in its overall performance, image quality and features.

All around, if you want the best image quality at the 50mm focal length, then the Canon 50mm f/1.2L should be at the top or near the top of your shopping list and we are dubbing it the “Gimme! Fifty.” As in “give me that fifty cause I want it!!!!”

A Mother's Magical Portraits of Her Sons' Adventures