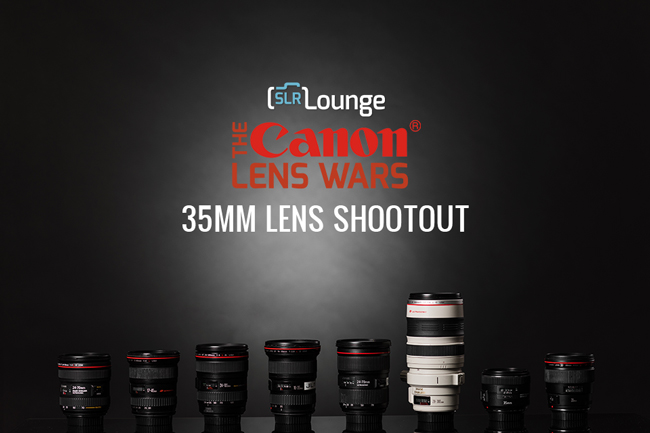 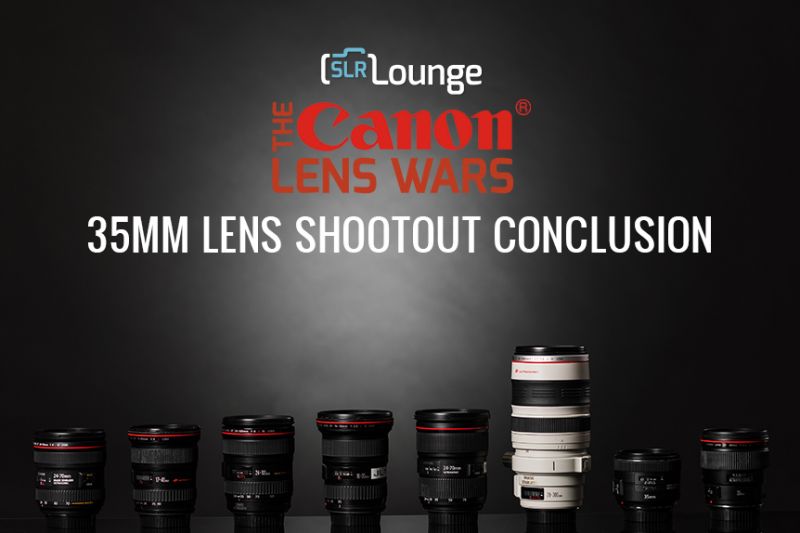 This is the 35mm focal length conclusion and we had narrowed the choices from 8 total lenses that fit into the 35mm grouping to just three.

Let’s start from the top at the lenses’ Wide Open Apertures (WOA). Once again, this is a visual test of differences, not a technical test. So, we are trying to distinguish differences in appearance while viewing images full screen on a Dell U2713HM 27″ IPS monitor. 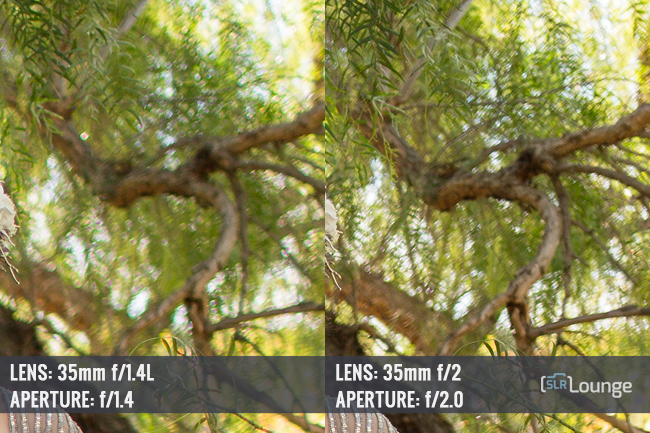 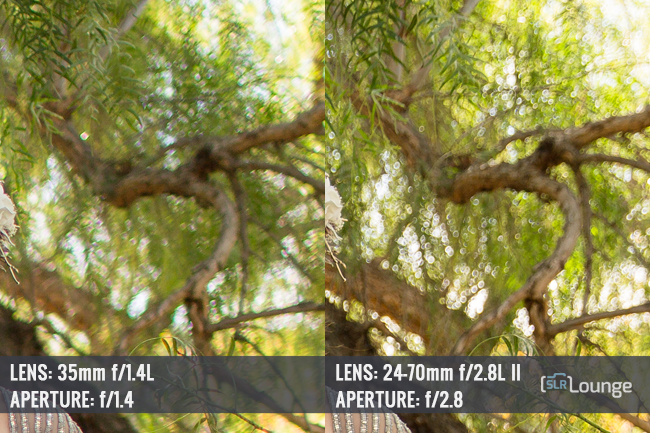 Not only does the Canon 35mm f/1.4L produce more bokeh, but its bokeh also has a very smooth and creamy look to the background and out of focus areas. As you can see below, it goes without saying that the 35mm L is the “bokeh king” out of the three. 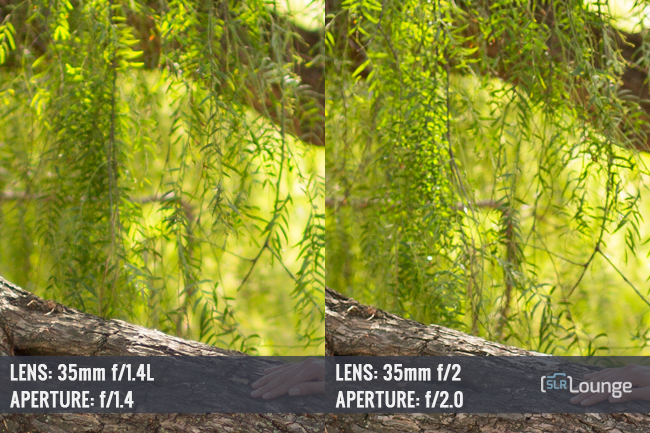 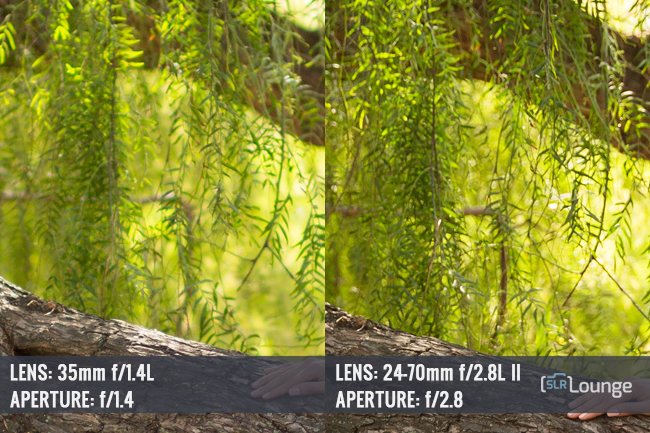 Now, if we take a look compare the bokeh quality between the Canon 35mm f/2 IS and the Canon 24-70mm f/2.8L II, it becomes more difficult to decide which has the better bokeh performance. Both have a beautiful look, and nearly the same amount of bokeh in the background. Due to overall image color and contrast, I tend to prefer the look of the 24-70 over the 35mm f/2. 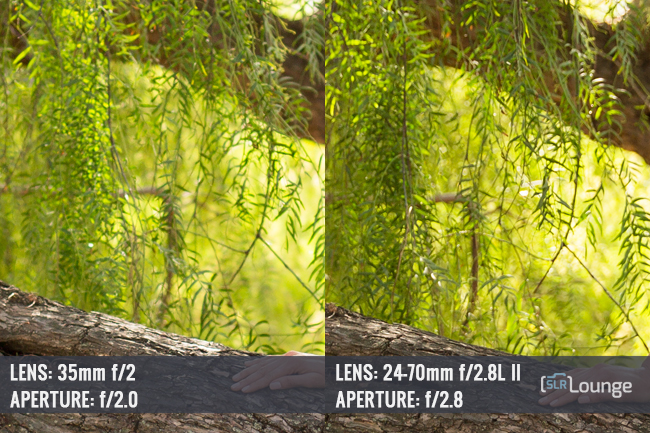 You can see below how similar they are when we compare the area of the tree trunk in both images. It is really tough to tell which has more unless you zoom in and even when zoomed in, it doesn’t necessarily look like the 35mm f/2 has any more bokeh, it just has a different look to the bokeh, and frankly, I still prefer the 24-70mm’s bokeh over the 35 f/2, but that is just a subjective preference at this point. 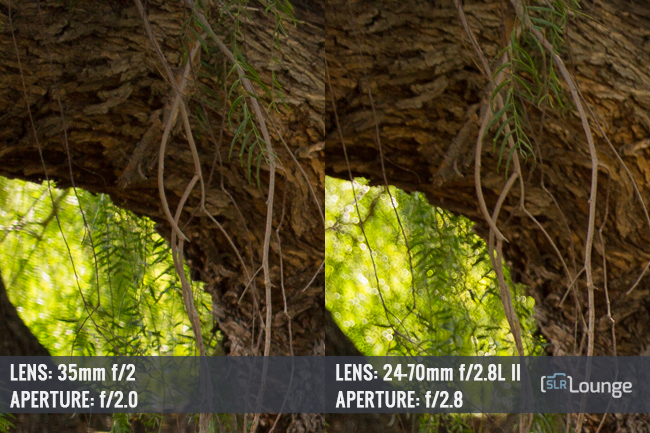 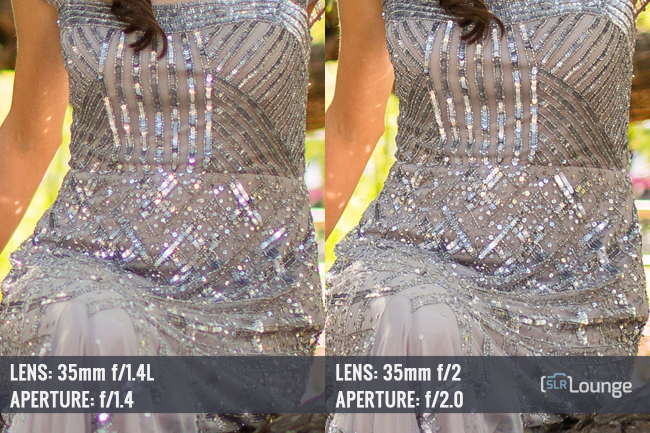 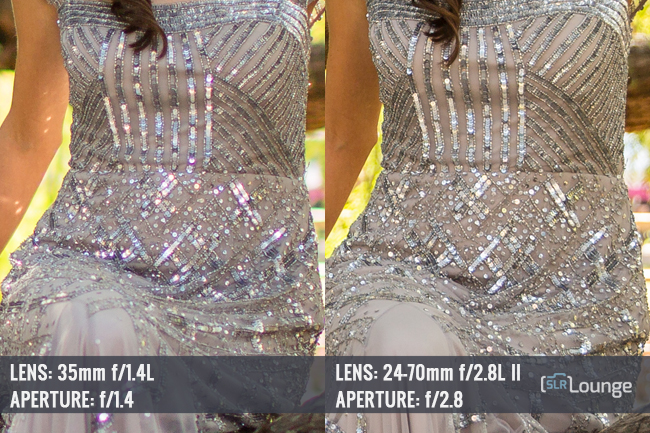 The other thing that I notice is that at a wide open aperture, the Canon 24-70mm f/2.8L II is easily the sharpest lens of the three. The 24-70mm’s color and contrast is also superior compared to the primes. 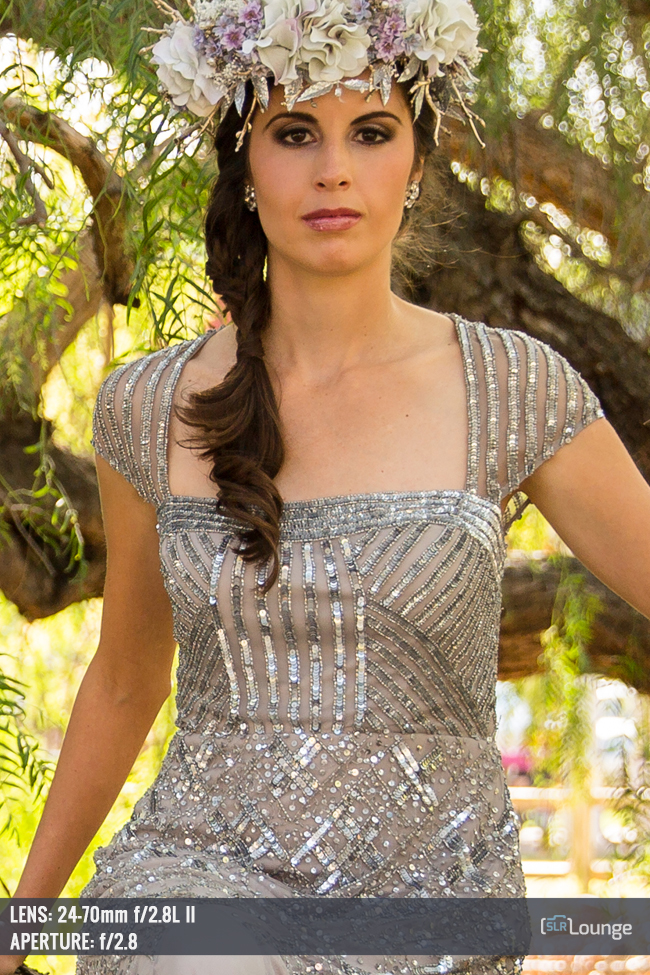 With all three lenses at the Widest Common Aperture (WCA) of f/2.8, we see the two primes start to edge out the 24-70mm f/2.8 ever so slightly when it comes to detail resolution. It is most noticeable when zoomed in over the dress detail. 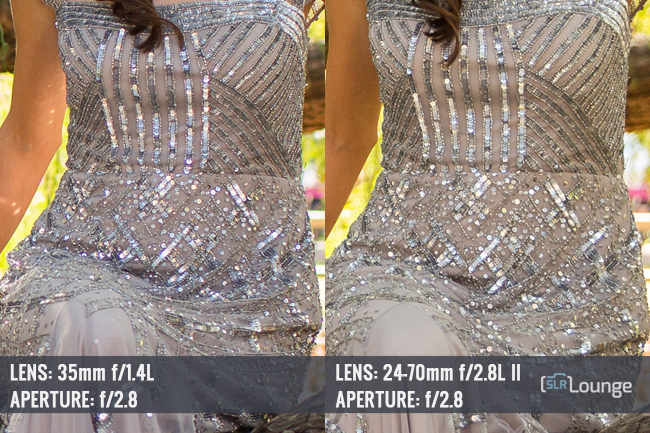 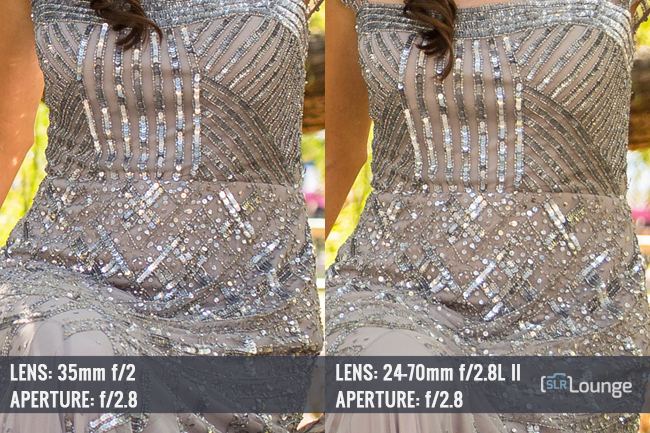 Between the two 35mm primes though, it is quite difficult to tell which is sharper, even when zoomed in. I think I tend to lean towards the 35mm f/2, but it splitting hairs. 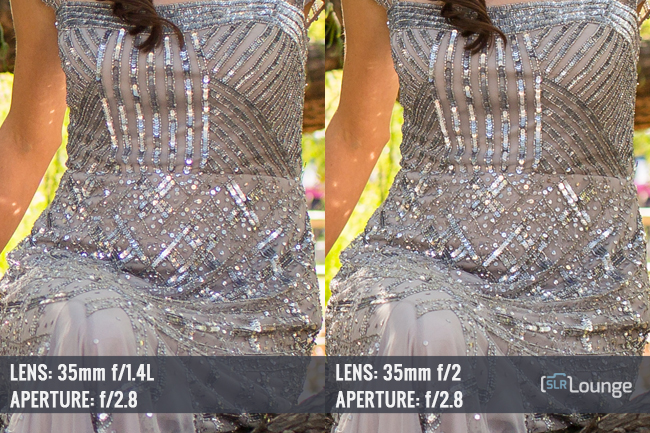 The difference in sharpness is there as you move towards the edge of the frame where the 1.4 shows a bit better edge sharpness as seen below. 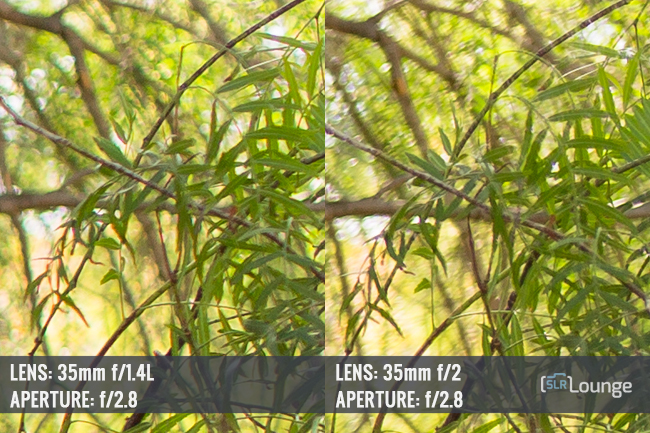 But honestly, unless you are pixel peeping, in reality all three lenses can produce very sharp images.

When comparing the lenses aesthetics at their Widest Common Aperture (WCA) of f/2.8, the difference in bokeh becomes less noticeable, and for the most part visually equalize as you can see in the side by sides below. 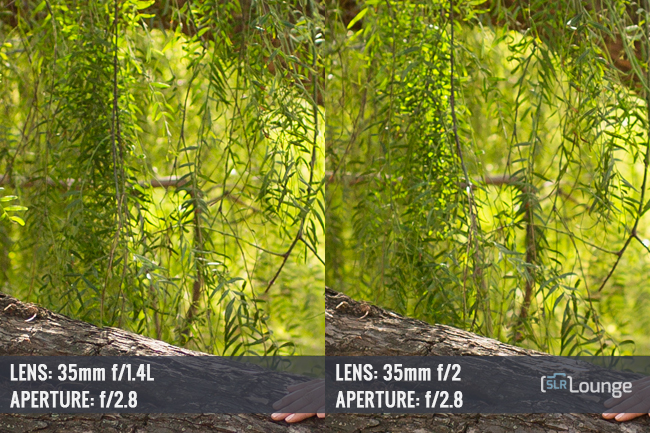 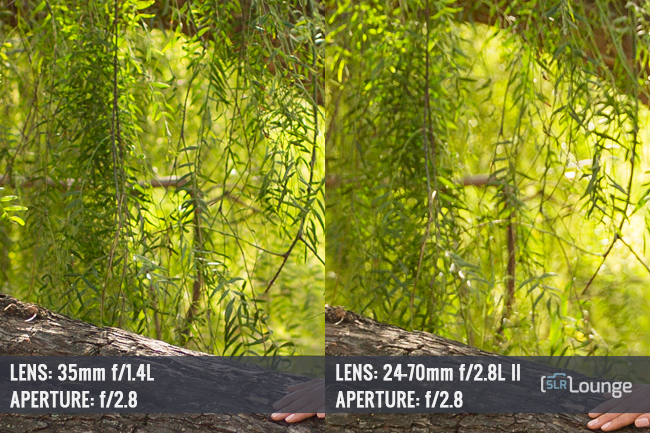 However, when it comes to detail resolution, the primes do start to pull ahead of the Canon 24-70mm f/2.8L II once you get past f/2.8. 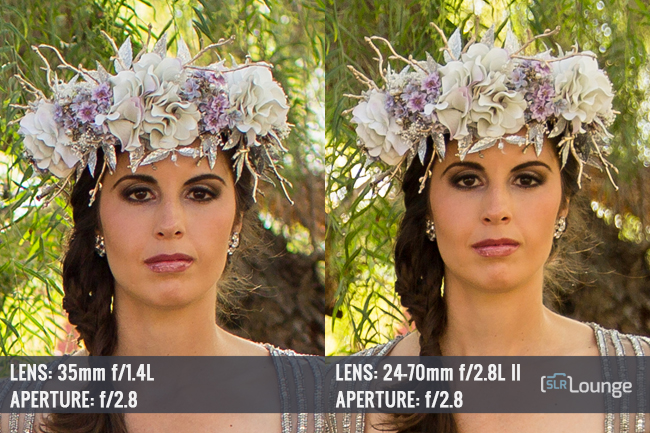 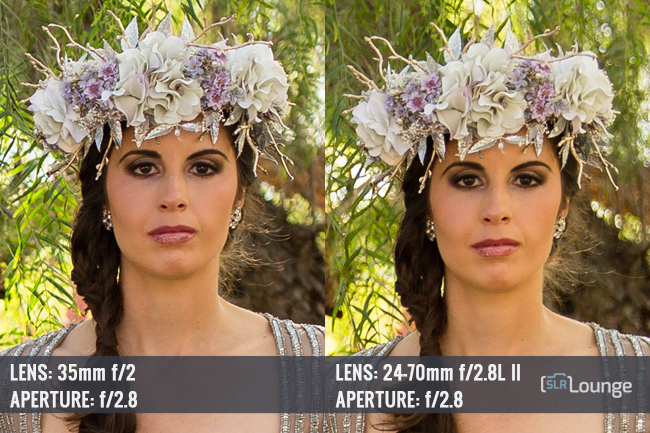 Nevertheless, I still end up preferring the 24-70mm at 2.8 simply because the 24-70 has a bit more vivid contrast and better color rendition overall. Finally, there is little noticeable difference between the 24-70 zoom and the primes in regards to overall lens vignetting and barrel distortion at f/2.8.

The Best of the Best – 35mm Final Conclusion

Choosing a single winner in this category is tough, because each of these lenses are fantastic and each have their merits. But, let’s give it a shot.

For me, the winner among these 3 lenses in the 35mm focal length in terms of overall price for performance is the Canon 35mm f/2 IS. The 35mm f/2 is a fraction of the cost of the other two lenses, and puts out 90% of the image quality at this focal length. At only $500, if you are on a budget and the 35mm focal length is a good fit to your shooting style, this would be the go to lens.

But, the only issue here is that if you have the Canon 24-70mm f/2.8L II or are planning to get it in the future, then I wouldn’t say it is worth having both lenses because the 35mm f/2 doesn’t provide a noticeable visual difference in its aesthetic. If you need the extra stop of low light, and can’t move to the 35mm 1.4L, then perhaps you can justify keeping both. But, otherwise it is an either/or decision. Either the Canon 24-70mm f/2.8L Mark II or the Canon 35mm f/2, but not both.

The Most Versatile Performer

The first lens I would opt for in this focal length is again the Canon 24-70mm f/2.8L II for what are becoming obvious reasons. It has a look that is almost as good as a prime, it has amazing contrast and color, and it is versatile being able to go from 24mm to 70mm.

While 24-70mm f/2.8L II is expensive at around $2,200, it once again flexes its muscles in showing just how much of a value it is, even at that price point. Essentially we are getting near luxury prime performance, in a zoom lens. Had they added in Image Stabilization, it would have been an absolute knock out. But, even without IS, this lens provides incredible performance and functionality.

Of the 8 lenses we tested, the only other lens I would choose in the 35mm focal length is the Canon 35mm f/1.4L. When paired with the Canon 24-70mm f/2.8L Mark II, the 35mm L will give you the best combination of looks and low light capability.

But, the only thing you need to consider with the Canon 35mm f/1.4L is whether it is the right prime for your shooting style. The focal length is right between the Canon 24mm f/1.4L and the Canon 50mm f/1.2L. The 24mm is better for landscape and wide angle photography, and the 50mm is better for general portraiture, the 35mm is kinda just stuck right in the middle and for some it may be a focal length that feels a bit “awkward.”

Personally, I actually ended up choosing the Canon 50mm f/1.2L over the 35mm because that is the focal length that makes more sense based on what I am shooting. I also have the 24mm 1.4L, but that got replaced when the 24-70mm f/2.8L Mark II arrived because it had a beautiful look when wide open (not quite as much bokeh, but still awesome), and because generally I don’t need the extra bokeh or low light performance on my wide angle lens, f/2.8 is enough.

So my main advice here is the the Canon 24-70mm f/2.8L II is going to be your must have lens in from the 24-70mm focal range. From there you are going to want to choose the right prime focal lengths that suit your particular shooting style, and that best compliment the other primes in your toolkit.

Canon, Who? Nikon, What? - Sigma Says Zeiss is Main Competition

Extreme Ice Survey Uses Photography To Save The World