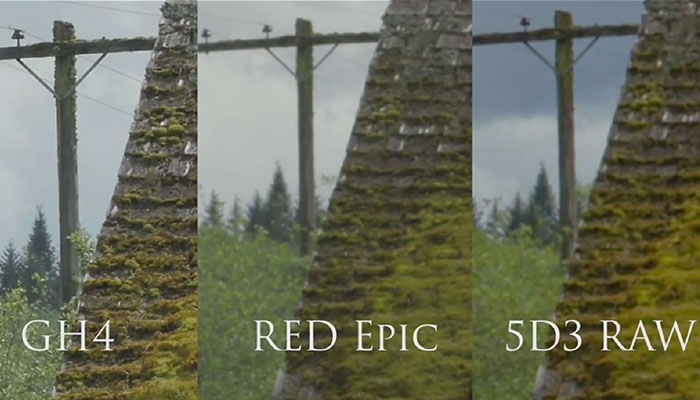 Last week, I shared a video of the new Panasonic GH4 blowing the Canon 5D Mark III standard footage and BMPCC (Black Magic Pocket Cinema Camera) out of the water. It is something that we should expect, considering both of those cameras shoot 1080p max, and the GH4 is shooting at 4K. But still, the differences were clear and very much in favor of the GH4.

Today, I have another similar test for you, this time comparing the GH4 to the Red Epic and Canon 5D Mark III’s RAW video (through Magic Lantern). The results, surprisingly, are almost just as drastic as with the other test. The GH4 simply blows both the Red Epic and the 5D3 RAW footage away. See for yourself.

That last split screen shot at the end really gets it across, doesn’t it? I am honestly surprised how well the 5D3 RAW footage did scaled up, but equally with how bad the Red Epic was in comparison to the GH4.

If any of you were on the fence about the GH4, you have to admit that this is impressive. The Red Epic is a 5K camera, and a really expensive one at that. Yet the GH4 clearly beats it out in sharpness, even when zoomed to 300%. I just wish I had the money to go grab myself a GH4…

What are your thoughts on this? Does this improve your impression of the GH4? Leave a comment below and lets discuss.

Enable Motion Control for Timelapse Film From Your Smartphone