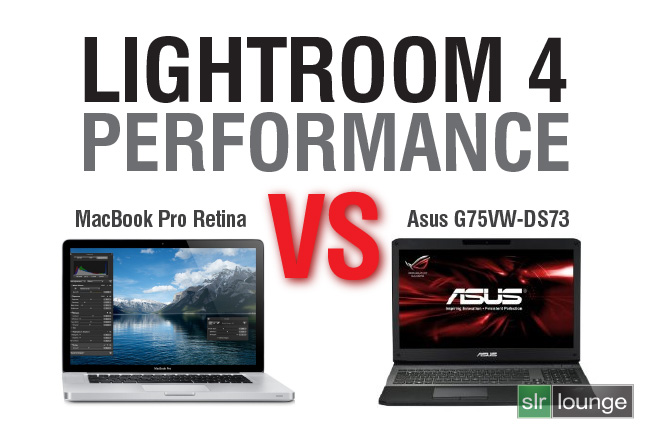 As many of you know, we recently announced that we just received the latest versions of the editing machines that we use within the studio. We showed them all off within our previous article titled Our Favorite Laptops for Creative Professionals. On the Windows side of things, we have the ASUS G75VW-DS73, a gaming laptop that we have turned into our primary image editing machines. On the OSX side of things, we have the Apple MacBook Pro 15″ Retina.

They are both top of the line machines, so we thought it would be a great opportunity to do some real life benchmark tests comparing their overall image editing performance within Lightroom 4. Not only to see which machine is quicker overall, but also to see how the slightly different setups in hardware impacted image editing speed. I think you will find the results quite interesting, so read on!

Note that the following tests are real life comparisons designed simply to test the computational power of each machine within Lightroom 4. Performance in other applications will vary (especially in video intensive applications).

For both machines, we transferred the same exact test catalog of 400 RAW 10 Megapixel images shot from a Canon 5D Mark III to the Desktop.

On both machines, we set the default Lightroom 4 Cache folder to 50GB in size, and placed the Cache folder within the test catalog folder as well.

Both systems were running with operating system + Lightroom 4 installations only to maximize performance.

Once the machines were setup, we proceeded to run timed tests in the following areas for all 400 images within the catalog.

Once each set of actions were completed for the entire batch, we took the total amount of time for each action and divided it by the number of images (400) to determine the average speed per image.

What We Were Expecting

We know that Lightroom 4 is a processor driven application. It really doesn’t use any form of graphics card acceleration. In addition, it doesn’t really take advantage of installed RAM beyond the “recommended” amount of 4-8GB (as per Adobe’s Optimize Lightroom’s Performance web page).

The ASUS came with a 3rd generation Intel i7 2.4Ghz processor. Unfortunately, we weren’t able to upgrade that chip further at the time of purchase. We upgraded the MacBook Pro to a 3rd generation Intel i7 2.7Ghz processor. So, we knew that we would see a performance increase on the processor side of things given that the MacBook Pro has a beefier processor. However, given that the ASUS has dual Crucial 512GB Sata 3 SSD drives in a single drive RAID 0 performance configuration, we were expecting that it would make up for the slightly slower processor. 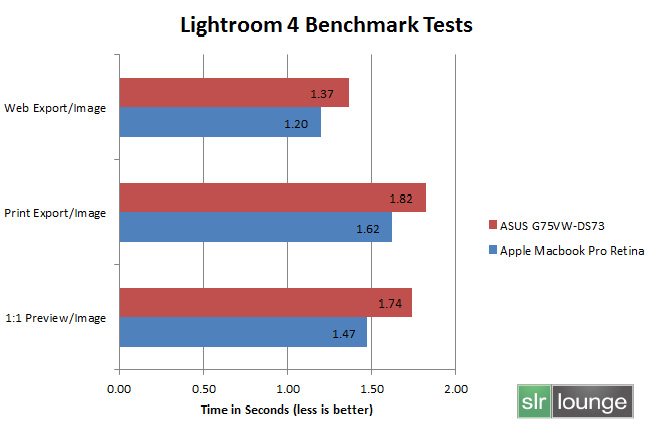 Our final results were actually quite surprising. The overall difference in the performance RAID 0 setup on the ASUS didn’t make a single bit of difference when it came to Lightroom 4. We discovered that beyond a standard SSD, Lightroom 4’s bottleneck is simply going to be the processor itself.

This was a major bummer since this basically means that Lightroom 4 really isn’t optimized to utilize extra RAM, any form of 2D graphics acceleration, RAID setups, etc. Beyond the standard “recommended” setup, the only thing that is going to really boost performance is simply a faster processor.

We noted that benchmarks comparing the Intel i7-3630QM vs the Intel i7-3820QM from common sites like CPU Benchmark and Notebook Check show a performance difference from 10 to 18% depending on the computations performed. This is the exact amount of difference we noted in overall performance between these two machines through the various Lightroom 4 tests performed.

Regarding actual image editing performance, it was very difficult to notice an actual speed difference when it came to editing the photos in the Develop Module. Both machines felt equally responsive when moving and editing from image to image.

The Apple MacBook Pro Retina was indeed quicker with its faster i7 processor. However, given the tests that were performed, it is safe to assume that both machines would have performed equally well in this situation if they simply had matching CPUs (or if we simply hadn’t upgraded the MacBook Pro’s CPU). We found that all of the additional hardware in the ASUS made no difference in overall performance since Lightroom 4 was unable to utilize it. A very unfortunate and disappointing finding.

For most people, a 15% difference in speed will not be extremely noticeable. To put it into perspective, what would normally take 10 minutes for the Apple to process, would take around 11.5 minutes for the ASUS to process. When it came to image-to-image editing in the Develop Module, the speed differences in the machines was not noticeable by our test users. The overall processing difference was only noticeable and measurable when performing timed batch functions over large amounts of images.

It is certain that Apple was the faster machine in this test. However, most of us exporting or rendering previews over large amounts of images (1000+) aren’t going to wait around for our machine to complete the task. These tasks are generally performed at night, during lunch, on a spare machine, etc. Hence a modest 15% difference in speed wouldn’t be noticed as the user wouldn’t generally be waiting for these actions to complete.

Either way, both machines are extremely fast. For overall value, we use the ASUS machines for image production. At around $2k – $2.2k per unit, filling the office with 7 of these machines has only cost us around $15,000. With that same number of workstations, we would be looking at around $25,000 – $30,000 using Apple MBPs.

Of course, there are other benefits and drawbacks to each of these platforms. All of which are beyond the scope of this article (and some are highly debatable). In the end, each individual will have to decide on their preferred operating system and whether or not it is worth nearly double the price for the modest boost in performance. I use both my ASUS and my Apple laptops on a daily basis and I love both machines, each for different reasons.

Hope you all enjoyed!