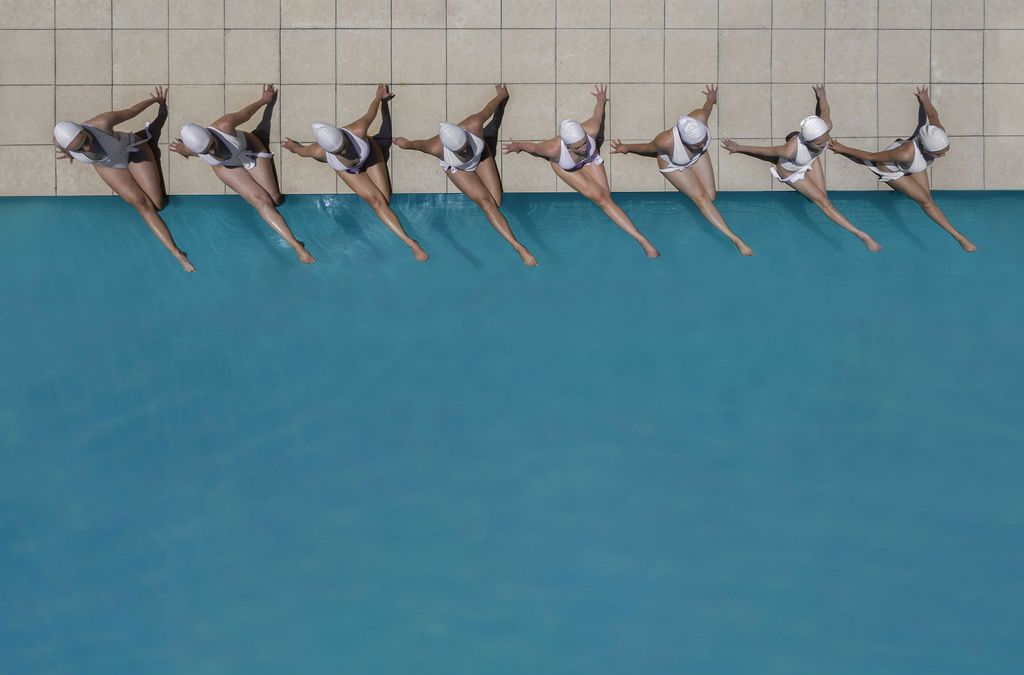 Aerial Photography Series | The Beauty of Synchronized Swimming From Above

Brad Walls (@bradscanvas), an award-winning master of Fine Art Aerial Photography, recently released a new body of work titled “Water Geomaids,” in which he invites audiences to experience an intimate and unique perspective of synchronized swimming (alternatively named artistic swimming), just in time for the 2021 Summer Olympic Games in Tokyo.

With a background in photographing athletes (including competitive divers, gymnasts, tennis players, and ballet dancers) and swimming pools, Walls created a hybrid photography series that utilized his expertise in both subject matters. Walls’ visual style focuses on experimentation with negative space, symmetry and leading lines, which aligns perfectly with synchronized swimming.

This genre of aerial photography, specifically in the area of synchronized swimming, was lacking in representation, and Walls documents this beautifully choreographed sport with the precision and detail it deserves. Katrina Ann, the choreographer and former competitor who collaborated with Walls to make this project a reality, said as much when explaining why she chose to work with Brad: “Artistic swimmers spend hours every day working to achieve perfection. With Brad’s eye for detail, perspective and creativity, we were able to showcase our hard work that is often lost to the naked eye.” 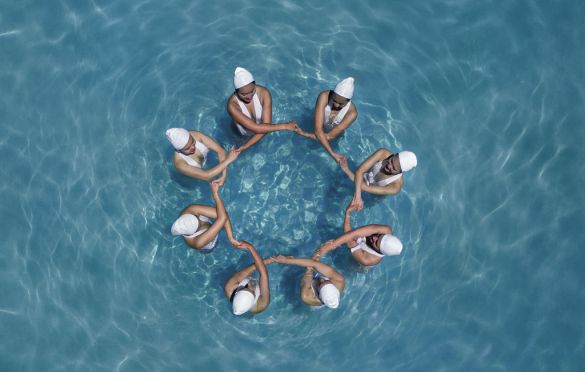 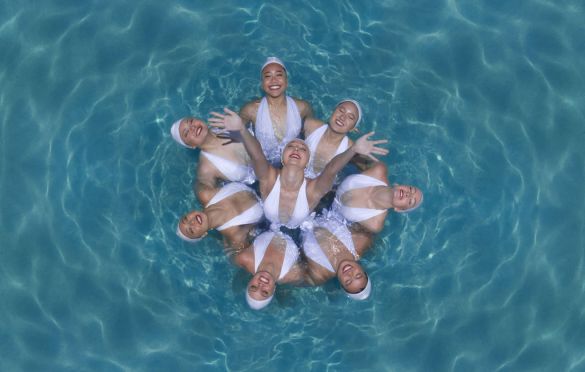 Below, you’ll learn about Walls’ process for creating this series. Walls, who meticulously plans out all of his shots beforehand, shares how he goes from pinning ideas to drawing out the geometric shapes he wants to create in his aerial photography. He also talks about how he and Katrina Ann “cherry-picked” static positions from routines that build repetition of form and geometric sequences. It’s a great inside look at how Walls combined passion and planning to create this incredible aerial photography series. 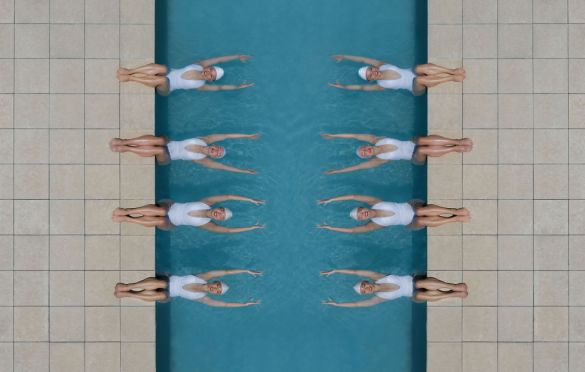 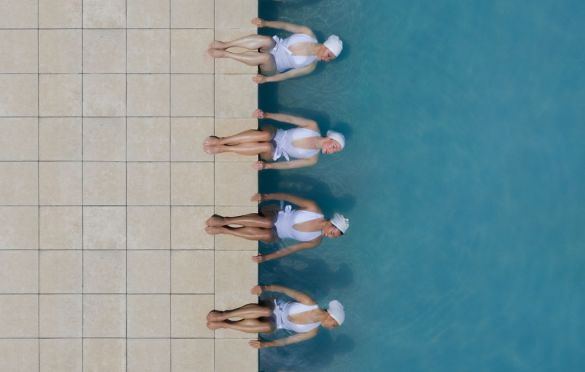 Question: What inspired you to create this aerial photography series?

I was surprised at the lack of imagery capturing the shapes and patterns that synchronized swimmers create. Additionally, I had a few images of synchro swimmers on my Pinterest board just waiting for me to figure out how to capture them. I was certain I wanted to really explore it through a geometry lens (figuratively, of course).

Question: What is the biggest challenge in the creation of these photos?

Choreographically, it was a challenge to arrange the swimmers in the patterns I wanted to execute. That is where Katrina, the lead choreographer of the Synchro team, played a huge role.

Question: What cameras, lenses and lighting gear were used to create the photos?

The DJI Mavic 2. I am very much a minimalist when it comes to equipment. Because of that, all my emphasis is on post-production.

Question: Do you have a favorite photo from the series? If so, what is it and why?

“Circle of Synchro.” No matter how much planning and effort goes into the shoots, you can never fully prepare for those serendipitous moments, like the one shown in this image. The girls were between shapes and we wanted to execute a circle but were struggling, so we started playing around. The swimmers bunched up and leaned to one side and due to the physics of it all, they began to create a whirlpool effect.

Question: For photographers looking to create impactful aerial photography images like this, could you share your process of coming up with your concepts and ideas?

First, I have one Pinterest board with an array of ideas, some for photos and others for geometric pattern illustrations. One of these images from this Pinterest board forms an “epic” or theme, which then is translated into another bucket from which I use that theme to build out more inspiration. Next, I usually pick up a pen & paper, or just my notes app and start drawing, just squiggles to place subjects, shadows and frames. Then, it’s time to execute. This process is the most crucial with any of my shoots.

Question: What are you currently working on? What’s next?

First, I’m preparing a book on either my “Pools from Above” series or my sporting series. Regardless of which theme I choose, I have begun talking to publishers to help guide me through the process.

Beyond that, project-wise, I’m pushing myself into more conceptual work. For example, my latest conceptual series, UTOPIA, really pushed me creatively. I need to keep practicing and developing those skills. It’s one thing as a creative person to develop one piece of work, but it is a whole different world to create series-based work with 12-20 images using a recurring theme. 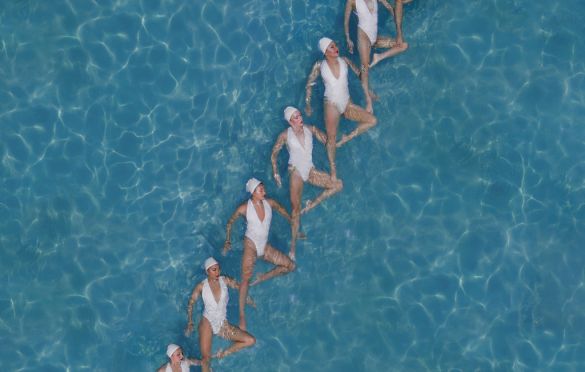 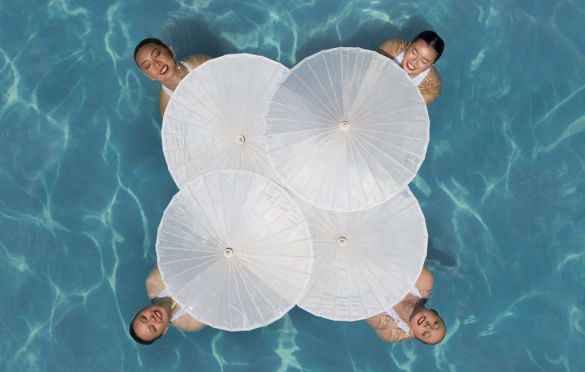 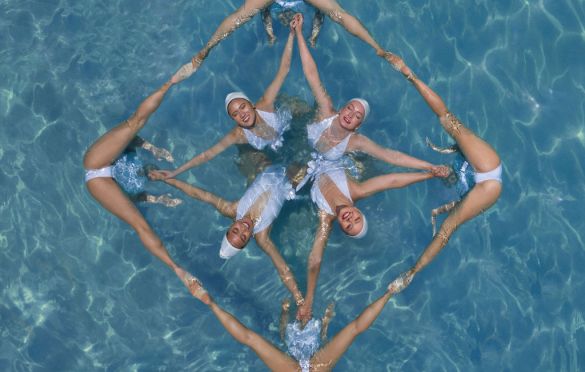 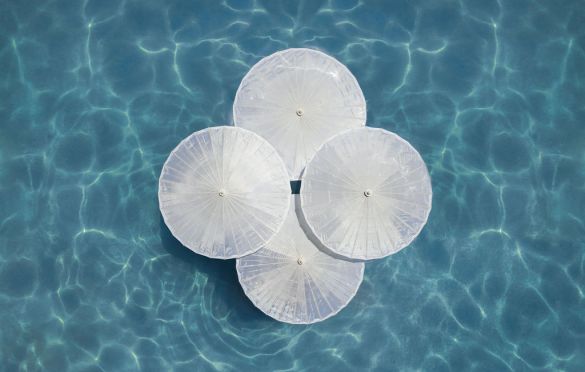 Since 2019, Sydney-based aerial photographer Brad Walls has refined his style and garnered international acclaim. As a result, Walls set new precedents in photographic expression and defined a new era of aerial photography. Also, Brad has received several awards and attracted features in Washington Post, Guardian, CNN and multiple other publications around the world. Brad recently earned a front cover of Signature Luxury Travel, as well as a featured spread in Aesthetica Magazine and Marie Claire Italy.

Walls was a finalist in the 2021 Sony World Photography Awards in two categories. Walls also placed second in the 2021 Fine Art Photography Awards ‘Conceptual’ category. In addition, he won the 2021 Prestigious Commarts Photography Competition in the ‘For Sale’ category. Soon, Walls will release a picture book showcasing the sports he has captured from above over the past three years. When it comes out, the book will be the first of its kind.