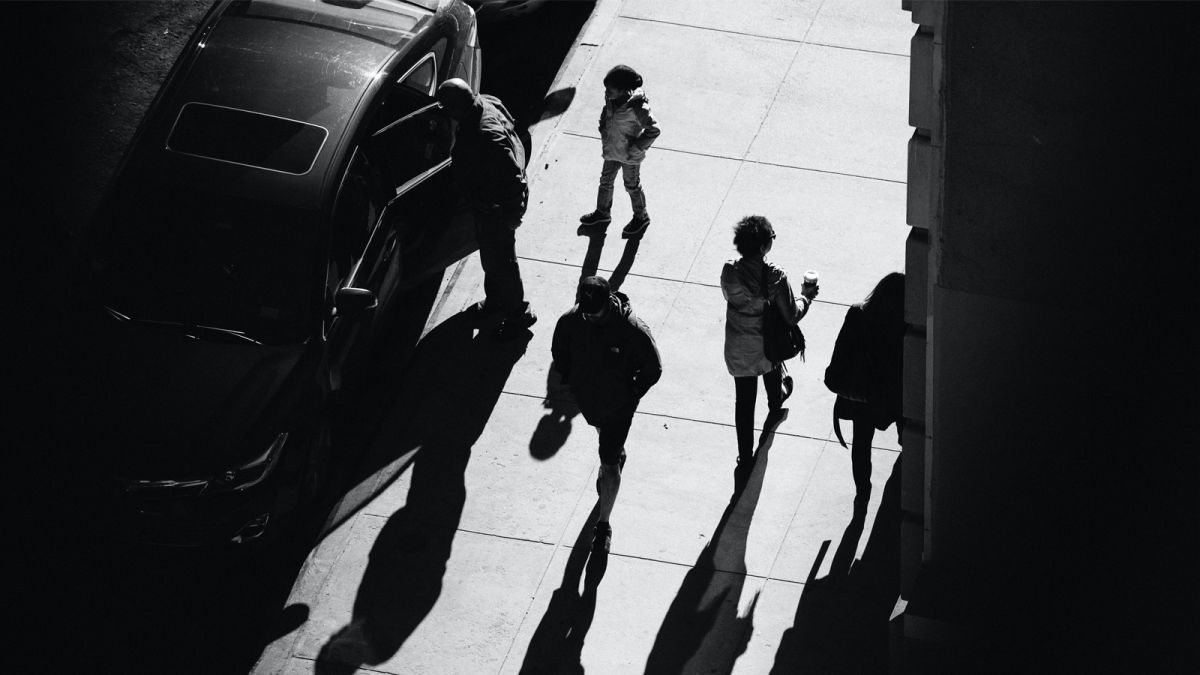 One of the best places to find and follow famous street photographers is on Instagram. Through the app, we can take virtual art walks through famous street photographers galleries, each highlighting locations & people in visual stories that connect us all. Whether through detailed captions or images that reflect some larger theme related to the human condition, we can learn a lot about the genre (and about ourselves) by looking to the work of its leaders.

“I was five when he became a person in my world. I didn’t know exactly who he was. I just knew that there was someone around that was making my mother smile. I had to look way up to see him. I’d never met someone so strong. He’d tell me to hold onto his wrist, and he’d lift me into the sky with one hand. He worked at an auto shop, airbrushing designs onto the side of vans. I think he dreamed of being an artist. But he needed something more stable. So after he decided to marry my mom, he became a cop. He never lost touch with his creative side. He was always building things around the house—making things look fancier than we could afford. He built my first bike from scraps. He encouraged me to read. He encouraged me to write. He loved giving me little assignments. He’d give me a quarter every time I wrote a story. Fifty cents if it was a good one. Whenever I asked a question, he’d make me look it up in the encyclopedia. One day he built a little art studio at the back of our house. And he painted a single painting—a portrait of Sting that he copied from an album cover. But he got busy with work and never used the studio again. He was always saying: ‘when I retire.’ ‘I’ll go back to art, when I retire.’ ‘I’ll show in a gallery, when I retire.’ But that time never came. Dad was a cop for twenty years. He was one of the good ones. The kind of cop you see dancing on the street corner. Or skateboarding with kids. But in 1998 he was diagnosed with MS. First there was a little weakness. Then there was a cane. Then there was a wheelchair. It got to the point where he couldn’t even hold a paintbrush. We did his hospice at home. He seemed to have no regrets. He’d been a wonderful provider. He’d raised his daughters. He’d walked me down the aisle. During his final days, we were going through his possessions, one by one. He was telling me who to give them to. I pulled the Sting painting out of an old box, and asked: ‘What should I do with this?’ His response was immediate. ‘Give it to Sting,’ he said. All of us started laughing. But Dad grew very serious. His eyes narrowed. He looked right at me, and said: ‘Give it to Sting.’ So I guess that’s my final assignment.”

With over twenty million followers on social media, Brandon Stanton (aka Humans of New York) is easily one of the most famous street photographers working today. As noted on his website, Stanton’s work “provides a worldwide audience with daily glimpses into the lives of strangers on the streets of New York City.” Stanton, whose style features portraits paired with stories, has also photographed people outside of New York City and he’s shared stories from people in more than twenty countries. If you haven’t yet visited Stanton’s Humans of New York profile on Instagram, get ready to be inspired. There’s a reason he’s amassed such a following.

I rode a motorbike for a little while when I lived back in South Africa. I miss the feeling of freedom you get from travelling like that. #blackandwhite #blackandwhitephotography #streetphotography #streetdreamsmag #lensculture #featureshoot #lightandshadow #protectyourhighlights #embraceyourshadows #ricoh #grist #grsnaps #ricohgr3 #lightroommobile #instagram #london #wandsworth #shapes #shadows #motorbike #negativespace

Sean Tucker’s thoughtful composition and dramatic interplay of light and shadows firmly cement his place among the most creative street photographers featured in this article. Also, as an artist focused more on the ‘why’ than the ‘how’ with the images he captures, Tucker uses his YouTube channel to offer fresh insight into his process with informative and inspiring stories behind the photos he captures.

longing for the moment until we meet again. #cineandcolor

Next to the “enter” button on her website, Paola Franqui describes the gallery of images to come as “a collection of visual stories.” On her site as well as her Instagram feed, Franqui delivers exactly that, in a cinematic style that captures the emotions of those she photographs in fleeting moments of time. While she’s earned the moniker of famous street photographer, she also uses her adept skillset to capture visual stories in a commercial capacity for big brands like RayBan, Budweiser, ESPN, and several others.

Based in Argentina by way of Paris, Yanidel has traveled the globe capturing compelling street photographs. Though he doesn’t boast the following of some of the other famous street photographers on this list, Yanidel is a worthy contender for placement here and his work reflects that. Yanidel also writes about his process for capturing street photography images and shares tips and techniques through his blog. As noted on his website and made apparent in his images, Yanidel takes a documentary approach to street photography in an attempt “to give a surrealist and lyric dimension to the little facts of our daily life, trying to blend in some humor and a positive spin from time to time.”

A digital product designer with a passion for photography, Mikk Olli found his way into street photography after challenging himself to overcome his introverted tendency to shy away from human subjects. Like Sean Tucker (listed above), Olli finds unique compositions and highlights his subjects through bold contrasts of light and dark, often isolating a singular subject against a stark backdrop. Consider Olli an up-and-comer worth a follow. With his consistent, high-quality output, it won’t be long before his social media numbers officially qualify for the “famous” label.

Cyclone Amphan with a wind speed of up to 200 kph expected to hit coastal areas of India and Bangladesh on Wednesday. (20-05-2020) Many times during its history, Bangladesh and the surrounding region have been struck by devastating tropical cyclones that have caused great loss of life and property. Bangladesh is particularly vulnerable to storm surge flooding due to the geography of the land and region. Over the next few decades, scientists expect 17 percent of the country’s land to be submerged, and 18 million Bangladeshis to be displaced by seas. The country regularly suffers from deadly and devastating flooding, tropical cyclones, storm surges and droughts. I am sharing few images from my long time project on ‘Climate Change’ in Bangladesh. We can all hope that these images and stories of afflicted climate refugees will bring more attention to this issue. #climatechange #migrants #gmbakash #cyclone #humanitarianphotographerofbangladesh #documentaryohotograoherofbangladesh #bangladeshiphotographers #bangladeshrohingyadeployment #jurnalistofbangladesh #portraitphotographer #streetphotographer #bangladeshphotography #travelling #travel #travelphotography #bangladeshiphotographer #disaster #nature #planetearth #dhaka #Bangladesh #climateregugees

Chock full of bold colors and authentic expressions, the photos that occupy GMB Akash’s Instagram profile will keep you coming back for more. Moreover, the stories that accompany the images make for compelling reading and may even inspire you to take action. A photojournalist at heart, GMB Akash captures visual stories of a wide swath of subjects, from lost tribes to refugees, against a backdrop of climate crises and political unrest.

Phil Penman’s Instagram feed reads like a fine art gallery of street photography, mainly (but not always) featuring monochromatic captures of the New York City and its inhabitants. Penman’s award-winning work has made him among the most influential and famous street photographers on this list (and in the world). Having documented celebrities and historical moments (like September 11, 2001), Penman’s recent work has turned its attention to various crises, including the COVID-19 pandemic, as illustrated in this piece on how homeless people in New York shelter in place.

The founder of Burn Magazine, an “award-winning online and in print journal for emerging photographers,” David Alan Harvey has a long history in the genre and has earned his way onto a number of “best of” lists like this one. A quick glimpse at his Instagram feed will plant a seed of interest in his style that will no doubt grow and lead you back to view his work time and again. Throughout Harvey’s gallery, you’ll find a well-balanced presentation of architectural and human captures, each thoughtfully composed and rendered in either color or black and white, whichever best suits the imagery.

In a beautiful blend of street photography and fine art, Girma Berta’s work features a cast of candidly captured citizens set against bold & colorful backdrops. This holds true for pieces that have been digitally altered (such as those featured in his Moving Shadows collection), as well as real world captures taken against city backdrops. Hailing from Addis Ababa, Ethiopia, Girma has built an award-winning body of work that’s equally comfortable at home in a world class gallery or online in Instagram’s gridded squares, which is especially noteworthy considering many of the images have been captured using an iPhone.

Portraits… it’s a book of love… compassion and humanity… when it comes down to it, it’s always that simple… . Link to buy in my bio x

Known primarily for his work documenting the homeless, Lee Jeffries’ intimate portraits of his subjects offer a rare glimpse into a strand of society that’s often overlooked. The closeup, gritty images put viewers face-to-face with Jeffries’ subjects, whose expressions reveal depths of emotion and inspire compassion. For a so-called amateur photographer, Jeffries has built an impressive body of work and a substantial following with whom to share it.

I hope this list proves a helpful starting point from which to dive further into the genre. Here again is a quick recap of the famous street photographers featured in this article.

Let us know some other famous street photographers that you follow and feel should’ve made list. We know there are plenty left out there who can inspire droves of photographers with their imagery.

How To Create Effective Overhead Product Lighting For Photos & Video