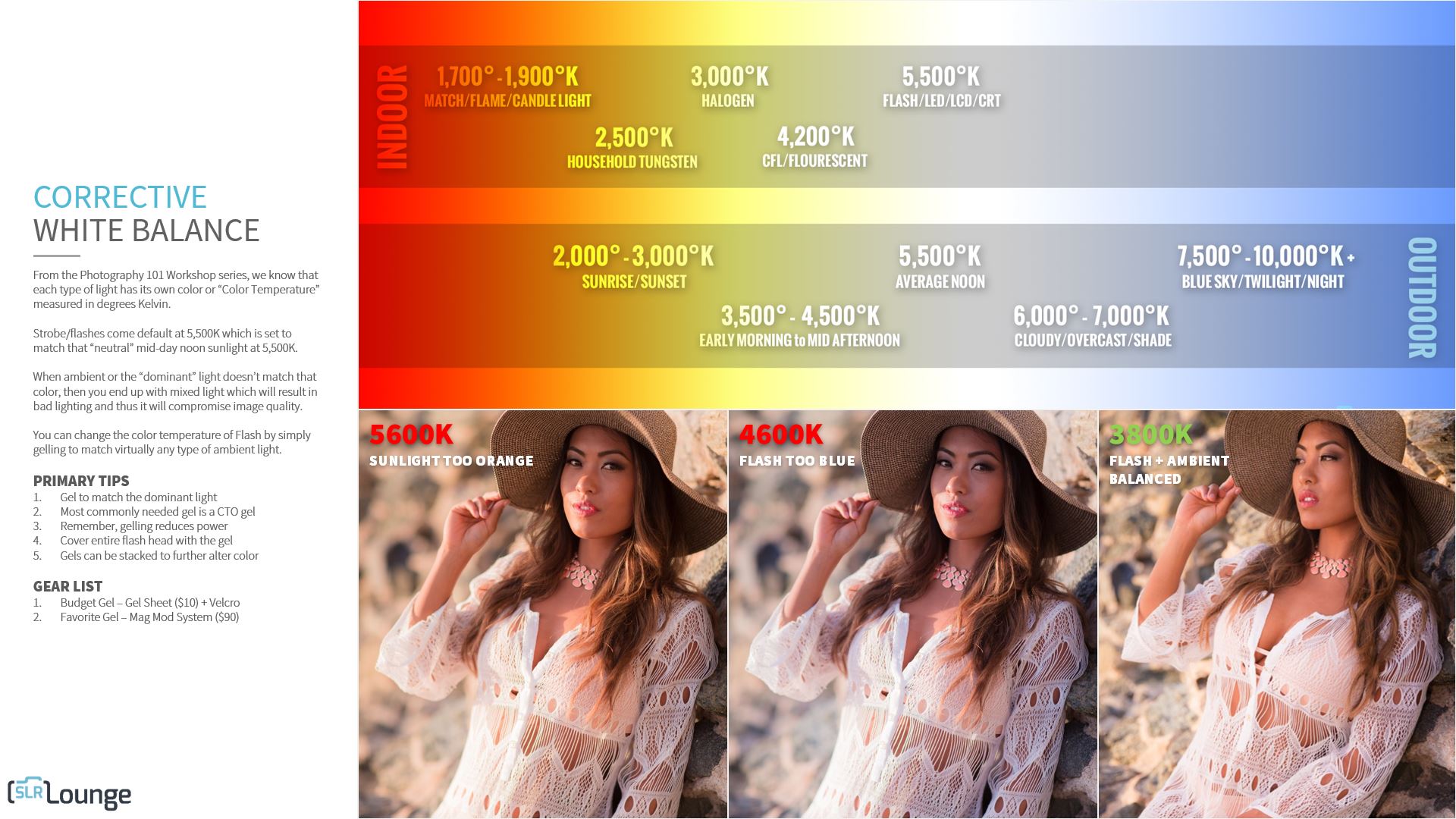 In wrapping up our chapter on understanding light, it’s important that we get to touch, again, on white balance. We have two slides here because I feel like there’s two approaches to white balance. There’s the corrective side, where we’re basically correcting white balance issues that we have in differing color temperatures. There’s also the creative side where we change the color of a flash or change the color of our light because we want to get a stylistic or creative use out of it.

Lets cover the more corrective side first. Those of you that have watched Photography 101 you’ll recognize this little diagram. This is our color temperature diagram showing some of the basic light temperatures of different indoor lights versus outdoor lights. We have match, flame, candlelight, which is roughly just under 2,000 kelvin. We have household tungsten and halogen lights, like the lights behind us, which are roughly 2,500 degrees up to 3,000 degrees. And things like flash. Flash is 5,500 degrees, LED, LCD, CRT, these are all around 5,500 degrees kelvin.

Going straight below there we have average noon outdoor sunlight. This is also 5,500 kelvin, but, depending on times of day, the sunlight is also going to change in color. During sunrise and sunset, we’re really far closer to this time of light in the background, that orange light, than we are this neutral white 5,500 kelvin look. We’re at 2,000 to 3,000 degrees kelvin. At night time, let’s say during blue skies, twilight, that nighttime color temperature is generally around 7,500 to 10,000 degrees kelvin.

Whenever we’re shooting in these different situations, if you find that the light that you’re adding to the scene. The light that you’re adding with flash doesn’t quite match the light naturally in the scene, this is where we want to add corrective white balancing. We want to change the light here, and we can do that in a couple different ways. Lets me show you two simple ways, I’m going to show you an inexpensive way and then our favorite way.

The most inexpensive way, which we still do to this day as well, we have our people on our staff, we don’t want to buy MagMod’s for everybody because they’re a little more expensive, I kind of buy them for myself, the simple way to do it is to buy gel sheets. This is a gel. They generally come in sheets that are quite large, they’re probably 2’x3′ and so forth. They can cut into, say, you can make about 15 to 20 of these from one sheet of gel, which is only $10/$15 or so from either your local camera store or we just get them from B&H online because it’s free shipping, free tax and so forth. Free tax, no tax, whatever.

All we do is we apply a little Velcro strip on both sides of this, we apply a little bit of Velcro to the flash and then simply we just take tape this over the flash. Not the most elegant solution, but this totally works. This is a very simple and inexpensive way to gel all your flashed. Velcro is very cheap, the gel sheets themselves are very cheap and it’s awesome.

If you want a more elegant solution, my favorite solution for, really, we’re going to use it for not only just gelling but also for grids and for light modification and so forth, is the MagMod. What you do is you attach this little rubber strip right over the flash head. It has magnets on both sides of this. The MagMod system, which is $80 comes with gels, it comes with various color gels. The gel holder it also comes with grids and so forth. Then you just basically attach this and it attaches via magnets. Now you have a gelled flash. Essentially what we’ve done here is we’ve changed the color temperature of this flash to CTO. That’s the gel that I have on here, is a color temperature orange, CTO, gel.

We’ll talk about gels a little more as we go forward, if there was one color gel that I would say you must have in your tool kit it is a CTO gel. It’s because it’s the most universal. You can use it during sunrise, during sunset to neutralize. You can use it beyond and create creative effect which we’ll show you. You can use it indoors as well.

Let’s show you what it’s done in this particular scene. Here we have this scene where I’m shooting Jill, it’s basically right where the sun is setting, around the horizon. We’re getting a really beautiful light, super orange, and every minute as it sets closer and closer to the horizon it’s getting more and more orange. What I notice is, as I take my first shot, I have my white balance at 5,600 degrees kelvin. The sunlight, it looks just a little bit too orange but my flash looks right about right. The flash that’s over the shadow area to skin, I haven’t blocked out the light basically, we have a bit of sunlight on her cheek, and then around the areas of shadow you can see where the flash is.

The flash looks decent. It looks okay, the color temperature is fine. The sunlight is too orange. If I drop my color temperature in camera, if I drop the white balance to 4,600 degrees kelvin, then the sunlight looks pretty decent. It looks much more neutralized, much less orange basically. The flash, it ends up looking blue because it’s at 5,500 degrees kelvin. My option is I simply add a gel to my flash and then what we’ve done is we’ve added a scrim. We use one scrim to block off the light coming from the sun, and all that does, that scrim is just a transparent, not transparent, semi-transparent white piece of fabric, just a 5-in-1 Westcott scrim. We hold it there to sheer off the direct sunlight. No more direct sunlight on her. Then we use another reflector, it’s another Westcott 5-in-1 and I have my geleld flash. I balance into that 5-in-1 and then on to her and we get this beautiful balance. Look at this, this is at 3,800 degrees kelvin. Again, the sun is setting pretty quickly, so you can see that the sun has gotten a little more orange because over here we’re at 5,600K and it’s much more neutral over here with 3,800 and it’s still quite orange.

The sun is getting more orange as it sets, but look at how beautifully it’s balanced, look at how she’s kind of that nice natural warm tone and it’s the same as the background. It looks like we just used natural sunlight for this shot. In reality it is gelled flash that gets us that look. That’s how we’ve done it. Of course you can use, by the way, a reflector stand, generally where we shoot on the beach stands don’t hold up well when you put reflectors next to them because they’re like giant sails and the wind will knock them over. I have my assistants hold them up.

Lets talk about the 5 primary tips when it comes to using corrective white balance. Tip number one. I want your gel to match the dominant light. Here’s the thing, if I’m shooting a scene like this, where the background lights, these are probably close to 2,600, 2,800 degrees kelvin, they’re very orange lights. I’m not going to gel so that those lights look white, I don’t want those lights to look white, I just want them to be less orange. I might gel this to a standard CTO, which would be 3,600 degrees kelvin. The background is still going to be warm. I’m not going to try to get it to neutral because it would end up looking very bland, and very boring. I don’t want my light to look pure white, I want it to still have some of the ambiance and have that emotion to it. What I do want is I want to gel to the primary light. If my primary light in a room is that light I’ll pop a CTO on it. Rather than using a blue flash head, just bare-bulb or bare-flash.

If, for example, I got into a wedding reception and there’s still a lot of daylight coming through the windows. Maybe I have chandeliers that are closer to that color temperate as the lights in the background but the dominant light in the room is still daylight because it’s still bright outside. I would leave my flash ungelled. I want to gel to the dominant light. If I don’t, what ends up happening is we end up mixing light, and mixed light over a subject does not look good. If part of their face is covered in yellow light and part of their face is covered in blue light it’s not going to look good.

Tip number two. The most commonly needed gel, like I mentioned, is a CTO gel. That’s the one gel, we can use it for corrective lighting purposes, we can use it for creative white balance purposes, we can use it for tons of things. They make blue gels and green gels, gels for every type of situation, that’s great to have those. But the one gel that I would recommend having is a CTO. Standard, full CTO. They make CTO’s, by the way, color temperature orange gels, in full CTO, half CTO, quarter CTO and so forth. Just get a full CTO gel sheet and you should be good. If you want to play around with blues and greens and so forth by all means go for it.

Number three. Remember that whenever you gel, whenever you apply a filter over your flash, if you’ll notice, if you look through this, it actually is darkening the screen a little bit. It’s doing the same thing to your flash. Gelling is going to reduce your flash power by a bit. Every time you add a gel you’re going to need to power up a little bit because you’re losing a bit of flash power.

Number four is to make sure, this is one of the things that kind of, as people are gelling their flashes and learning, is probably the most notorious mistake, is that they don’t gel the entire flash head. For example, if you cut this too thin and you cover part of the head and there’s part of the head that’s open, you’re getting 5,500 degrees kelvin out of this little strip right here on each side and then you’re getting 3,600 out of this and you’re ending up mixing light. Remember that you want to cover the entire head of the flash. Don’t be stingy, these things are $10, why aren’t you going to cut them large enough. Gosh. Just cover the heads people. I’m just kidding.

Last, gels can be stacked to further alter color. If, for instance, I’m in a scene where one CTO doesn’t get me to that corrective what balance that I need, I can add another half CTO, quarter CTO or another full CTO over that gel to double. Remember, again, if we’re adding more gels, we’re cutting flash power.