It’s easy to find reviews on all the latest gear releases, but you don’t always know what you’re getting in terms of the review. Is it sponsored? Is it not? Is it objective? One-sided? One thing is for sure – it’s hard to know who to trust. That’s why we created a new product review series: Head to Head. This series is not sponsored and has been designed to share honest, objective reviews of new photography gear, from camera bodies to lenses, lighting products, and more.

The format is simple: All of the gear we review is on loan from either Adorama or B&H or we’ve purchased it ourselves; no fewer than two people will share the review to help eliminate or minimize bias; we’ll be sure to share both the good and bad regarding what we liked and did not like about using the gear. While you can always find technical details in spec guides, our goal with the Head to Head Series is for you to walk away from the review knowing what it’s like to live with these products and use them in real-world situations.

To kick off the series, Pye Jirsa and Justin Lin, Co-Founders of Lin & Jirsa Photography and SLR Lounge, review the Fujifilm X100V camera, which was released back in March, the latest in a long line of X100 premium digital cameras. Here’s a quick overview of the basic specs and price before we jump into the review: 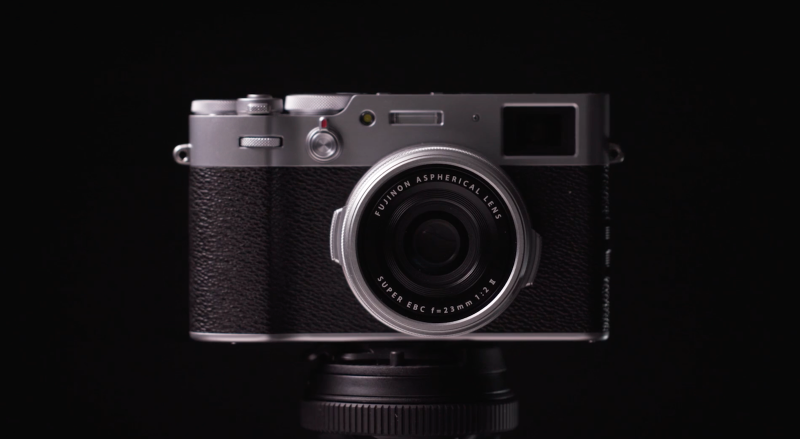 Pye’s Take: The Fujifilm X100V looks and feels good straight out of the box. It’s a small, compact body with beautiful styling. While it’s quirky at times, it has soul (as a piece of technology that makes you think differently) and is “cool” enough to put on the table when out to lunch with friends. 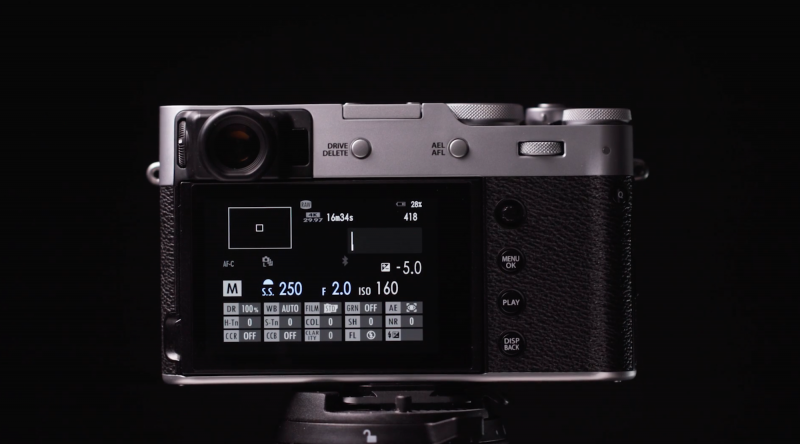 Justin’s Take: While the camera looks great, the small form factor is really what stands out (in a good way). No bag? No problem. The camera can literally fit into your pocket, as Justin discovered when he couldn’t find a bag before heading out to test the camera.

Pye’s Take: The shutter speed button layout for the Fujifilm X100V definitely seems as though it was designed to satisfy a taste for nostalgia rather than usability.

Justin’s Take: The ISO mechanism is equally confusing. In order to adjust the ISO, you have to pull out the dial. Among other concerns, this raises the issue of durability. How many times can this dial be pulled out before it breaks? Also, there’s no tactile indicator that lets you know how much you’ve adjusted the ISO. In other words, there’s no click or stopping point; it just spins in one fluid motion.

Pye’s Take: Adjusting the ISO is not intuitive on the Fujifilm X100V and learning how to adjust it required a Google search. When testing a new product, it’s nice to not have to read the manual before taking it out to see how it feels, so this was definitely a little disappointing in terms of design. The biggest downside in all of these button layout issues is that making adjustments during a shoot requires you to slow down and pull the camera away from your face, effectively disrupting the flow of your shoot. If you’re less concerned with working quickly to get the shots you need, then this might not be an issue for you.

Note: To adjust the aperture, you’ll need to turn the dial around the lens, as was the case in the older rangefinder style cameras.

Pye’s Take: The focus speeds, tracking, and other features all performed well. The lightning fast frame rate (11 frames per second with mechanical shutter) is impressive, unless you’re shooting in RAW, which brings up buffering issues. 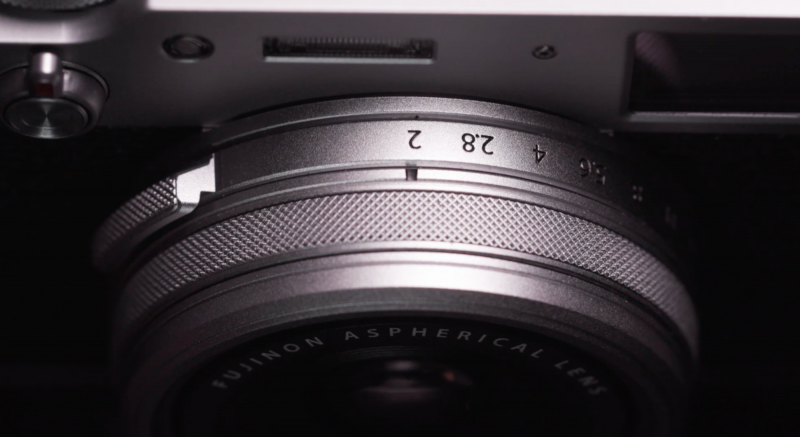 One of the things that the Fujifilm X100V does really well is capture beautiful images, which is clearly important for a camera. Also, the fixed focal length allows you to focus more on composition and moving through physical space to capture great images as opposed to worrying about which lens you’ll need to capture a shot from this angle or that.

Justin’s Take: The frame rate buffering issue when shooting in RAW is a definite downer. The camera uses a UHS-I bus interface instead of UHS-II, so don’t think there’s a buffering issue with your memory card. There isn’t. Of course, you can always shoot jpeg instead of RAW to take advantage of the high speed frame rate, but doing so limits your editing potential. Choosing to use outdated technology leaves plenty to be desired in terms of performance.

While some may appreciate how a fixed focal length forces you to move to change your composition, there’s something to be said for the convenience of swapping out a lens or using a zoom lens to quickly adjust your focal length, especially in fast-paced shooting scenarios. Moreover, a fixed focal length of 35mm is never going to give you the lens compression you’d get with a 70-200mm (or similar) lens. Depending on the backdrop, you may have to shoot portrait (vs landscape) to minimize distracting elements. If you get too close to your subject to crop out those elements, you have to deal with lens distortion, especially at 35mm.

Pye’s Take: The image quality is surprisingly great. The images surpass what many would expect from a $1400 camera. The price in and of itself is not cheap, per se, but compared to a $5,000 setup with a body and lens (which is not an uncommon setup for a great number of photographers), the Fujifilm X100V delivers on quality at an affordable cost.

Justin’s Take: After sending some of the test photos to the family, Justin’s sister responded that she needs to upgrade her iPhone because she assumed the images were captured with a smartphone. It’s not exactly high praise for image quality.

Pye’s Response: Because you don’t have the ability to swap out lenses and you’re less likely to use it in scenarios where you aren’t pressured to take super creative shots, you have to work with this camera with intention. The secret to great imagery has more to do with how you take a photo rather than what you use to take a photo. Great expressions, authentic posing, solid composition, lighting, matching tone and mood, etc. have a lot to do with the photographer’s creativity and ability to direct subjects, and very little to do with the gear.

In terms of the RAW files, they offered great dynamic range and were very flexible for post-production, allowing for the recovery of a lot of details in Lightroom. After sharing the images on social media, many people mistook them to have been captured with a Canon 5D Mark IV, which is impressive. 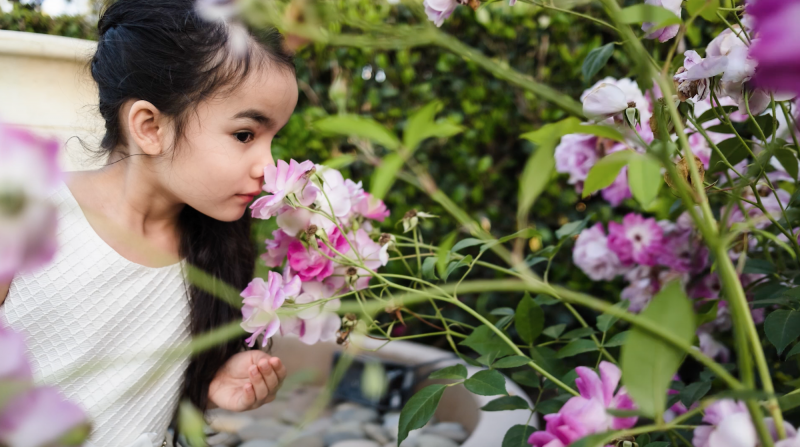 Pye’s Take: Film enthusiasts will love the access to film simulation modes that come with the Fujifilm X100V. These simulations are great as they’ve been simulated by Fuji themselves, which is about as close to the real thing as you can get with a digital camera. The in-camera colors are great. Of course, these are better used with jpegs as opposed to RAW files.

Justin’s Take: If you’re a fan of in-camera “filters,” then you’ll enjoy this feature. Otherwise, consider shooting RAW+jpeg in order to test the simulations on the jpegs but still have the full editing capabilities of the RAW files. At the end of the day, when you’re using the same filters as everyone else, you’re going to have very similar looks, which may or may not be okay for you. Of course, your composition, posing, etc. will differentiate your work, but these simulations seem to serve as more of a hobbyist feature. 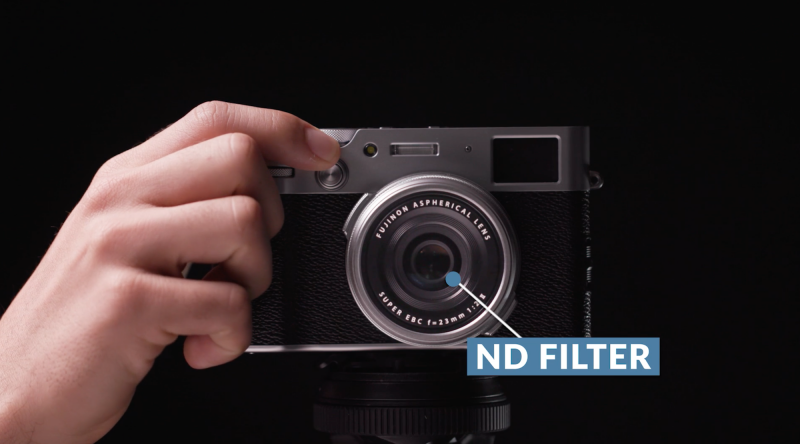 Pye’s Take: For any naysayers out there, it’s almost impossible to bash this feature. With a simple swipe of a button, you can activate a built-in 4-stop ND filter.

Justin’s Take: This is a pretty cool feature for photographers, but it can’t be used when shooting video. Again, it’s hard to understand this decision.

Pye’s Take: As mentioned above, we don’t get the ND filter when shooting video, which is kind of a big deal.

Justin’s Take: One of the reasons you might purchase the Fujifilm X100V is to serve as an upgrade from an iPhone for capturing photos and videos. Portrait mode on an iPhone doesn’t capture depth of field and other features that you’d expect in a dedicated camera. However, with no ND filter when shooting video, you’re limited in how wide you can open your aperture based on lighting conditions. Shutter speed options are extremely limited when shooting video (for most cameras), so videographers have to either stop-down their aperture (which expands depth of field and makes it harder to separate subjects from the background) or use an ND filter, which allows a wider aperture for more shallow depth of field.

No IBIS (In Body Image Stabilization)

Justin’s Take: On the topic of portability, not having in-body image stabilization is a big deal. If you want to minimize the gear you have to carry, you’re still going to have to pack a solid tripod or other stabilization device when capturing video with this camera.

Pye’s Take: Having no IBIS certainly takes away from the portability of the camera, especially for videographers. If the ND filter and IBIS were included with this camera, it’d be a content creator’s dream, so they missed the mark here.

Who Is This Camera For?

At this price point and with the features discussed so far, this camera is definitely a good fit for somebody, but whom? 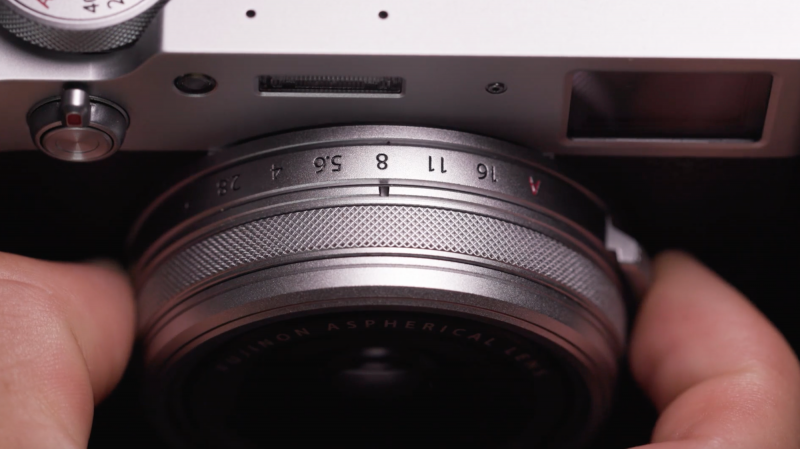 Justin’s take: Thinking back to feedback from family, this camera would be ideal for someone who wants to improve his/her photography skills and is looking to make an upgrade from an iPhone. The camera doesn’t have some of the priority modes featured in other cameras (such as aperture priority mode, for example), but there are workarounds. For example, you can set the aperture to “Auto” and then adjust your shutter to simulate Shutter Priority Mode, or set your shutter to “Auto” and then adjust your aperture to simulate Aperture Priority Mode. The different approaches to adjusting exposure make this a great camera to learn with, especially once you realize you want more control with how you create images.

That said, as a professional photographer who already owns a quality setup, this camera would struggle to find a place in the lineup.

Pye’s take: This IS a great camera for someone who wants to learn photography. Most of the “negative” things one can say about this camera can be flipped to show how it can help a photographer improve her or his skills. On the flip side, if you don’t intend to learn how to compose a shot, maximize dynamic range, post-produce for further improvement and other aspects of taking quality photos, then this may not be the camera for you. Honestly, the type of person I just described (not motivated to improve) would probably best be served by sticking with an iPhone or something comparable.

For enthusiasts and pros who already understand and practice the fundamentals of photography and are looking for a small, portable camera with great image quality, the Fujifilm X100V would make an excellent choice.

We hope you enjoyed our review of the Fujifilm X100V in this first episode of Head to Head. We ended up with one for and one against purchasing this camera. At the end of the day, the answer really rests with how the camera fits into your workflow, and more importantly, how you intend to use it.

If you’re interested in learning more about photography and want to improve your photography skills, be sure to check out our Premium education at slrloungeworkshops.com.