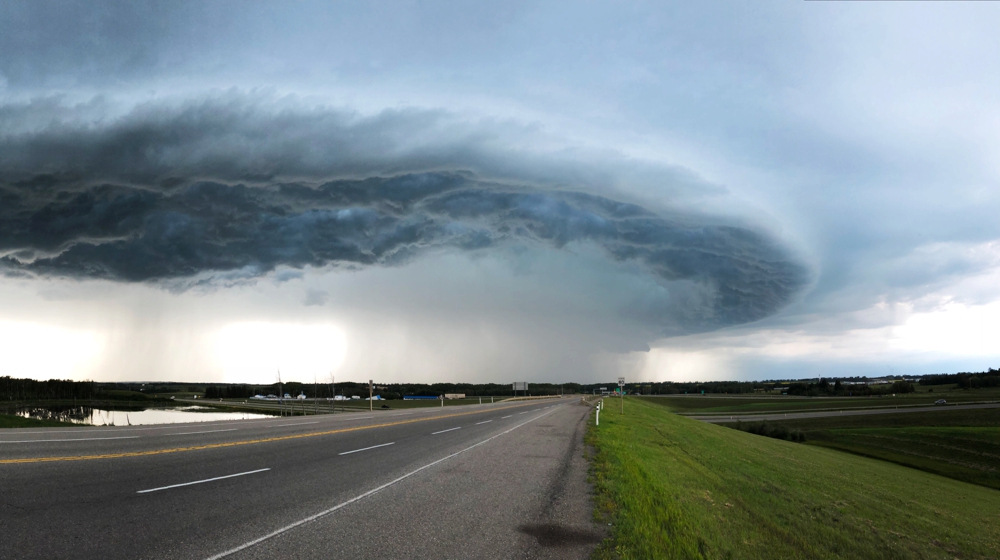 It’s tornado season, and you know exactly what this means. The wind picks up around you as the sky turns a hazy shade of dark green. Grass blades rock violently, back and forth through the hills. You look up, and the clouds are swirling in a way that is distinctive and unique. The question is: Do you run? Or do you pick up your camera and head straight for the chaos?

I wanted to say HELLO to all y’all new followers from our @lightroom takeover this week! It’s been a great week so far. Here is one my all time favorites of a tornado warned supercell on the edge of the Badlands, South Dakota. Will never forget the colors!!

It’s Not All About Luck

Elisabeth and Kelly have been checking the weather, every morning, for the past decade, chasing these kinds of storms. They live for lightning, thunder, and the rush of capturing breathtaking photographs of intense weather.

Despite what you learned when you watched Twister as a kid, storm chasing doesn’t carry as high a risk as you might think. “Storm chasing has a lot to do with luck, but it has more to do with patience and time,” says Elisabeth. She says a lot of the time is just spent waiting.

“You have a lot of downtime,” admits Elisabeth, “and you sometimes will sit in a spot for hours waiting for a storm to develop, only to watch it fizzle.”

During the last storm-chasing trip, they said they went almost 3,000 miles only to capture a few hours of actual storm watching. But what they did catch was truly incredible.

Luck and patience is not all it takes to be a successful storm photographer. You’ve also got to be well versed and up to speed in meteorological science. Kelly and Elisabeth spend a lot of time reading radars and studying storm models to make the right call about which storm to track next. They don’t always get it, but when they do, it’s worth it.

I was standing on a quiet dirt road in the middle of…somewhere. Somewhere humid, with birds chirping and sunflowers running along the fence as far as I could see. I didn’t mark this location, and I don’t know that I’d recognize it even if I had noted the GPS coordinates. As much as I consider myself to be a planner when it comes to travel and photography, I really enjoy the spontaneity of these random roadside spots, and I find that some of my favorite photos are the ones I never expected to take. ?

Now, you might be asking yourself if fear plays any part in these photographers’ lives. Well, Elisabeth says she hardly get scared, but that might be due to her profession serving as a distraction. But that doesn’t mean they haven’t had their fair share of close calls.

“One time near Matador, Texas, I pulled off the side of the road waiting for the bad part of a storm to move past,” Kelly says, “When hail the size of a softball hit my driver’s side windshield, cracking the window outwardly in circular shape!”

Elisabeth remembers an experience she had in Dodge City while photographing double tornadoes. While driving, she realized she was no longer safe in her vehicle, so she ran into a local convenience store for cover. “The clerk must have been about 18, and she was absolutely terrified that the glass doors were going to shatter,” she says. “We all took cover for a few minutes away from the front of the store, fully prepared to get into the large freezer in the back if the storm started ripping into the structure.”

Kelly had one more close call while watching an evening storm. “We were standing out near the edge of a field, watching a severe storm approach and thinking we were a safe distance away,” he says. “We quickly gathered our gear and ran to the car. Lightning struck behind us where we had been, and we heard an immediate, percussive boom. It’s so loud that you feel it. I swear I smelled the charge in the air.”

Looked like the upside-down world (from @strangerthingstv) walking out of my house last night in Frisco, Texas! Quite the summer storm ?cc @colleenwx @milliebobbybrown

Photo Editing to Give Feeling

When it comes time to edit the final shots, Kelly and Elisabeth say it’s all about showing what it was like to be there in the moment. It’s about replicating the feelings they had while chasing the storms.

Elisabeth says she loves graduated filters. They help her create moodier skies in post. She doesn’t use them on every photo, but she has used as many as four at once to either soften the color and light in the sky or make it darker with more mood. Most of the time, though, there’s no need to add extra drama to the photos. They’re already so intense! But a lot of work goes into the details.

“Pull darks up a little to reveal dark details,” Kelly says. “Use sharpening moderately to bring out details you want others to notice. Always shoot in raw if possible and take advantage of the dynamic range between lights, mids, and darks.”

These two storm-chasing photographers have had such an amazing career so far. But it’s the love for their craft that keeps them on the road, capturing storm after storm.

“Shoot what inspires you and don’t compare yourself to others,” Elisabeth says. “Photography is a very competitive industry, but if you’re trying to be the best in the business, you might be putting less of a focus on creating original work that comes from the heart. It’s always good to understand the balance between work and art, and do your best to score assignments that allow you to grow on a creative level.”

Kelly is a lifelong learner. His advice:

“Be patient and learn. No matter what I do or how hard I try to advance to the next level, I have found it takes a few years for these things to happen. Learn the tools of your craft, be an expert with your camera and your software, be diligent and learn everything you can—it will make you a better artist. Remember, none of this happens overnight.”

Thanks to Canon USA @canonusa for sharing this image from my archives this week. Being practically under this mesocyclone during tornado genesis was a dynamic experience. One I will never forget! Hope you enjoy! #kellydelay

For more of Elisabeth’s and Kelly’s work, follow them on Instagram at @ElisabethOnTheRoad and @KellyDeLay. Stay dry!

*Images Shared with Permission from Adobe (Via Adobe)