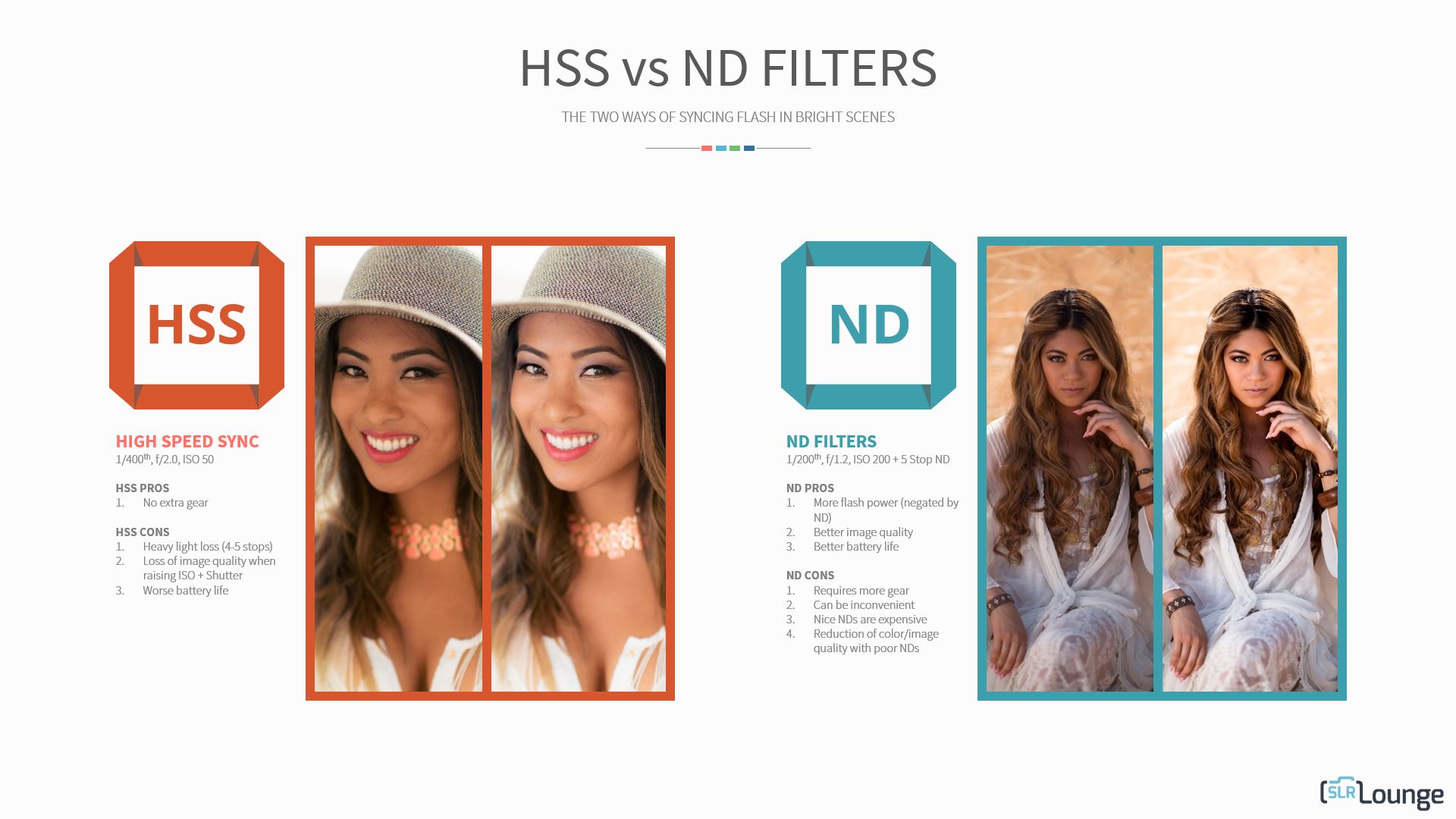 The general kind of limit for speed on flash synchronization is 1/200 of a second. Sometimes to be safe I even keep it around 1/160 of a second, but in general you can go up to 1/200 of a second and the flash can still fire off at whatever power setting you want it to within that period of the shutter speed. Anything above that and you run into flash synchronization problems, and what basically happens is, let’s say for example you’re using a PocketWizard on the camera unit itself, and you’re using an off camera flash, and I go at 1/400 of a second shutter speed. When I fire, I’m going to end up with a black bar in the frame where basically part of the flash was able to fire before the rear curtain closed, and the what we’re seeing with that black bar is actually the rear curtain. The rear curtain is closing before the flash had a chance to completely fire, so you’ll see a bar going across the image where flash hit a certain portion and where it missed another portion. That’s synchronization.

That’s great if you’re working with a background that’s beautiful and you want depth to field and you want to show this entire landscape and you want to highlight a subject in this background, and everything you want to be in focus; that’s fine. That’s great. The problem is, if you’re working in this midday situation and you want to blur the background. If you want to create depth of filed in separation there, and you lower the aperture, you open up the aperture like at say, F2.8 or F4, well, your shutter speed now climbs up. Your shutter speed at F2 or F2.8 is going to be around 1/2000 of a second or 1/4000 of a second, and that’s far too quick for standard synchronization speed. What are our 2 options? Well, the 2 options is basically we either use high speed sync, which is a feature built into full featured flashes that allows the flash to fire even at high shutter sped than 1/200 of a second. Or we use a neutral density filter, which we’d have to but separately.

This for example is that neutral density filter. This is a 5-Stop Singh-Ray filter that…this is the filter that we prefer using because it’s very nice in quality. It is rather expensive so we have some other suggestions that we’ll be talking about when it comes to ND filters that are in different price ranges. But what the heck? Why would I recommend buying a neutral density filter? Why would I even use a neutral density filter if I have HSS built into my flash? All right, so let’s talk in detail of HSS first, and I have my Vortex [inaudible 00:04:19] plus, which is a full featured flash right here. To get to HSS I simply hit HSS on the back of the unit and I get to HSS. Now I can carry my shutter speed up higher that 1/200 of a second, and the flash can fire and synchronize between that shutter speed. That sounds pretty fantastic, right? But here’s what’s actually happened; once you go into HSS, your flash is no longer firing once when the shutter opens. What’s actually happening…and it looks like it’s firing once, but what actually is happening is the flash is pulsing.

The flash within that shutter that it opens up, within that speed, let’s say 1/500 of a second, 1/1000 of a second, the flash is going to fire multiple times and move fast as it possibly can to make sure that it basically fits in there a flash, okay? It might flash 20 times within that 1/500 period or that 1/1000 period, 1/4000 period of a second it will fire multiple times. It looks like 1 flash that’s happened so fast, but it actually pulsed to make sure that one of those was able to get into that synchronization speed. Now, as you can imagine, if it’s firing 5, 10, 20, 50 times within that fraction of a second, well, you’re probably losing flash because it cannot fire at full power that many times in that little short of period. It has to recycle. We have tremendous amount of light loss. How much light loss? In general when you’re using high speed sync you’re going to be shooting at around 4 to 5 stops below full power, okay? We’re only getting like say 3 to 5 percent of our total flash output when we’re in high speed sync modes.

Now, it still is usable, but the thing there is that you have a lot of compromises that you have to make. When you’re using high speed sync, let’s say for example with this image right here. This was shot at 1/400 of a second at F2 and ISO 50. To get down to 1/400 of a second even, I had to drop my ISO down to 50, which on the [inaudible 00:06:26] 3 is not a native ISO, so I’m actually compromising a little bit of dynamic range there. But not a big deal, this is just a standard portrait. Okay, so 1/400 of a second I can get my flash to bounce off the reflector and get a descent feel like, but I’m extremely close to the subject. I’m very close, and the reflector is really close to me, and we’re working within a tight distance. As soon as I step away, I cannot get enough flash power to travel in the reflector and then onto my subject. There’s just not enough power there when I’m using high speed sync.

What are my options? Well, let me ask you this, how would I adjust my ambient exposure? How would I basically adjust the constant or ambient light exposure to be darker while adjusting flash exposure to be brighter? Well, if I raise the ISO, then I’m increasing ambient light and I’m increasing flash power, right? It’s doing both in the same time. Let’s say I’m at F2 and I want to stay at F2 for composisional purposes. Regardless, if I adjust my aperture, again the same thing happens. If I adjust my aperture then I get either more or less flash power and more or less constant light. It affects both equally. Remember shutter speed does not affect both equally, right? Shutter speed only is regarding constant light. If I wanted to darken down my constant light, while brightening up the flash exposure, what I can actually do is I could take my ISO from 50 to 100. Now, at that point, my constant light, my ambient light becomes 1-stop brighter, right? I can take my shutter speed up to 1/800 of a second.

In addition, again, if your flash is firing and pulsing multiple times with every single shutter, with every single shutting action, then you’re using more battery life, and that also means that you’re going to have slower [inaudible 00:09:16] times too. The pro is that there’s no extra gear, right? It’s built into the flash, that’s all you need. Let’s go with to the ND filer side. With the ND filter, the a 5-stop, just like this guy, in regular noon daylight, as bright as it’s going to get outside, we can shoot with a 5-stop at F1.2 fully wide open. Right now I’m even at ISO 200, so I can even get down to ISO 100 or ISO 50. I can lower the ISO quite a bit, and I’m still below my sync speed. My sync speed is at 1/200 of a second. Great. Fantastic. Now I can use my flash at full power, and that sounds great. It sounds like I’m going to get tones of extra flash power. There’s one problem. Here we had a 4 to 5-stop light loss because we’re using high speed sync, and because the flash is pulsing.

Here we have a 5-stop light loss as well because we’re using a neutral density filter, and a neutral density filter affects both your flash and the constant light. But what you are getting is that you can run the flash at whatever power side you want, you get the recycle speed that you need, and you get to keep the ISO low. You get to keep the ISO low, you get to run within that synchronization speed, and you can basically get the best image quality possible. Once again, you do need to get a decent ND filter, otherwise your ND filter itself is going to be reducing your image quality, your sharpness, your color and so forth. With a nice, or at least with a descent ND filter you’re getting better image quality, you’re keeping your sync speed below 1/200 of a second, which means that you have your full range of power settings and so forth on your flash, but you still are going to have light loss because you’re now controlling, or you’re now bringing down ambient and flash power by 5-stops, or whatever amount of stops your ND filter is.

The pros; well, the more flash power is negated by the neutral density filter. You do get better image quality and you get better battery life because your flash is not pulsing now. The cons; it requires a bit more gear, it can be a little bit inconvenient to carry around ND filters with you, and nice ND filters can be rather expensive, and con [inaudible 00:11:29] is that, well, if you get a cheap ND filter it can end up reducing your color quality, your image quality and sharpness, because you’re taking a $20 or a $30 cheap piece of glass and putting it over a really nice lens that could be several thousand dollars, and that’s never a good combo. I would recommend if you’re going to go the ND route, at least get a descent ND. We have good ND starting at $100 going to $250 from mid tier, and then with something super nice, like a Singh-Ray it’s going to be around $300.

Those are the pros and cons HSS versus ND filters, I’m going to prefer using ND filters because it’ll allow me to get the best image quality possible, but when you’re starting out and you’re learning, feel free to try out both.