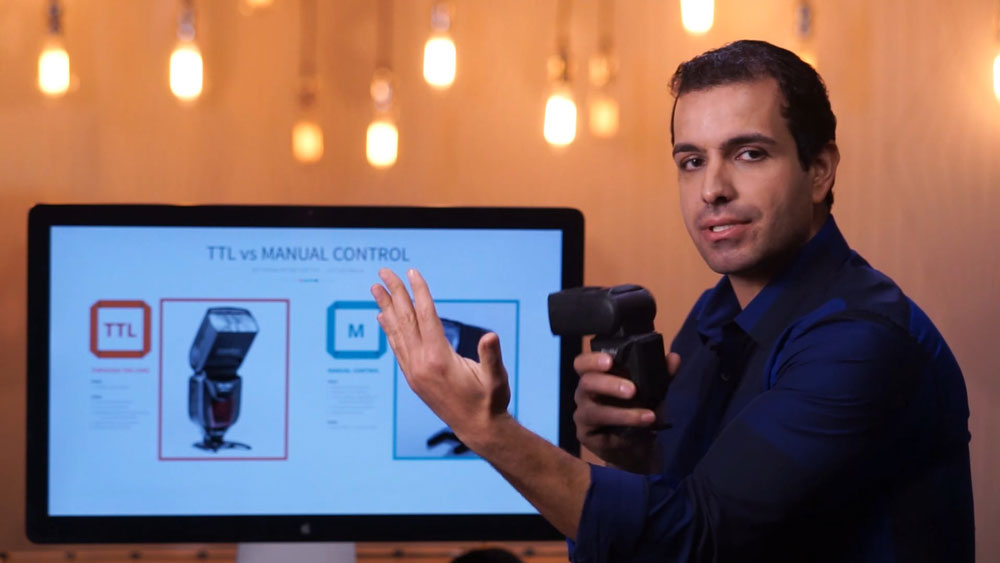 With manual flash, the photographer has full control over the amount of light that the flash outputs, but requires more experience and understanding of flash photography to achieve the desired lighting effects. With TTL flash, the camera and flash work together to produce predicted flash exposures automatically, making it easier to use but less consistent.  In the following two videos, from our Flash Photography Training System in SLR Lounge Premium, we break down the details of each.

Listen, I’m not gonna stand here and preach to you that one of them is better than the other. Just use manual. Okay? That’s all I’m gonna say. Just use manual. Actually, I will let you make your own decision. Just use manual. Let me show you why I want you to use manual and you guys can make the decision on your own. I promise I won’t say anything else at this point.

Check this out. TTL basically means your flash is gonna fire that pre-flash which is gonna take a measurement of the light reading, and then it’s gonna expose for you. In Photography 101, we talked about using the automated modes when you’re getting started, and that’s great. The automated modes are fantastic for getting exposure that’s usable. Similarly, I could say the same thing about TTL. It’s great when you’re getting started.

But, here’s the thing. Some people, by the way, would ask, “What if my flash head is pointed off to the side?” I’m gonna grab an actual full feature flash that has TTL. Let’s say that my subject is right here, but the flash is actually pointing to the side and is bouncing off the wall. They would say, “How does TTL take that measurement?” Like I said, it’s firing a pre-flash. That means it will actually fire a pre-flash against the wall, measure the light reading coming back from the wall, and then it would expose for that subject. It’s basically gonna get a reading that way. It really doesn’t matter what direction it’s pointing. It will take your reading and then fire, and get it hopefully right. But like I said, it gets it hopefully right.

Let’s talk about this. What are the pros? It’s simple. It’s automated. That’s really it. That’s the only pro that comes with this, because there’s a whole list of cons. Number one, you have less control, less precision. In Photography 101 we talk about getting you into manual mode because we want control. We want precision. We want every one of our shots to be equal in exposure so that way when we get into post-production, we can apply one set of development settings to it and be done. We don’t have varying exposures, and varying different looks and so forth that we have to manually correct in post. We want that kind of control and that kind of precision. With TTL, you don’t get that. You get automated simplicity and that’s it. 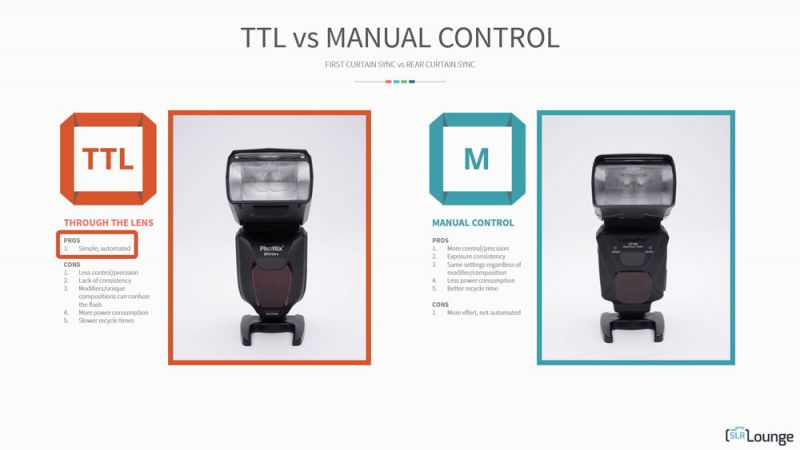 What else? You get the lack of consistency there, and the other lack of consistency is that if I get a correct exposure reading with TTL, I don’t really know what power setting was actually used for that. I can tell my camera, I can expose and say, give it a plus one or a minus one to the exposure value, but I don’t know what that value is. I don’t know how much power is coming out of the unit. If I were to move my light setups and get a result that’s not as good, I don’t know where to go with my power, other than just to dial up and down the EV. It’s a little bit difficult in that sense, where you don’t have that kind of predictability there.

Number three, modifiers and unique compositions. They can kind of confuse the flash. Let me tell you what I mean. There are certain modifiers like- I think the one that I was actually having the most issues with … and it will happen with various different types of modifiers, but let’s say you put a dome over this guy. Anything that you do is gonna kind of give the flash a little bit more to think about. Sometimes the TTL mode will still give you a correct reading. Oftentimes it does not.

Domes and those kinds of things can create challenges for the TTL to actually give you a correct reading. In those situations, it just really doesn’t work. If you’re using a super unique composition, where the subject is in a corner and you wanted to expose for that subject and really it’s just in a tiny part of the frame, this is another really confusing thing for the flash. Just as in Photography 101, trying to tell the camera to automatically expose for some little point in a scene based on whatever your crazy composition is, you’re not gonna get to the right point. You have the same issue with your flash.

More power consumption. There are a lot of people that would tell you that firing in TTL does not consume more power and it does not slow down your recycle time which is number five. It slows down your recycle time on your flash. I have proof that it does, and we’re gonna show you. We’re gonna give you proof that it indeed uses more power and slows down the recycle time. Why? Just think about it, you’re firing a pre-flash before it fires the actual flash. That uses up power. That pre-flash has to use a certain amount of power to get to it, and not only does it use more power to actually figure out what your exposure setting was, it’s gonna take longer to recycle afterwards. How long? It can actually be a long time. It can be up to thirty to forty percent longer to recycle after using TTL basically with that pre-flash versus just using manual mode. So there are strong reasons there not to use TTL.

Let’s talk about the manual side. The pros? It’s basically the exact opposite of what we just talked about on the TTL side. We have more control. We have precision. I know that if my light is pointed at my subject, and if I move a certain distance away, all I gotta do is power up the light. If I’m at one eighth power, I’ll go to one quarter power, or one eighth plus two thirds. I’m just gonna gauge it based on the distance. If you know the inverse square law you can be very precise with it, but the simple thing is just to take the power, dial it up a little bit, take a test shot, and you’re good. Just adjust from there. I have very simple control and precision. I know exactly what power setting it’s on. I know where to move it to. With TTL, I can only work with these exposure values, plus one, plus two, minus one, minus two, that’s it.

The exposure consistency. Again, we’re talking about getting image to image equal exposures. The only caveat here is that when you make a major change in distance between your subject, you do need to actually adjust the power here, whereas with TTL it would do it for you. But once we adjust the power, we’re good, we’re solid, we’re getting a whole set of images that are gonna be consistent and easy to post-produce.

Number four. Less power consumption. Number five, better recycle time. And the only con on the manual side is that there’s a little bit more effort involved. Just like when you’re shooting manual on your camera with your aperture, your shutter speed, and your ISO. When you move from scene to scene, and we always tell people, shoot throughout the day. Whatever you’re shooting, it doesn’t matter whether you’re at a wedding, whether you’re doing portraits. Shoot manual, and as you move from scene to scene, adjust. Does this take a little bit of time getting used to? Yeah. It takes a little bit of time, a little bit of effort to remind yourself, “Oh, I changed scenes. Oh, the light just changed. Oh, there’s clouds now overhead, I need to adjust my exposure.” But once you get used to that, it becomes very simple and second nature, and I want you guys to get in the habit of doing this same thing with your flash.

When it comes to photography as a professional, you want control. You want precision. You don’t want your camera making decisions for you because then when it comes to a situation to replicate what you just did, if something goes wrong, you really don’t know how to get back to it. I want you guys to take control of the flash. Shoot in manual, even though I’m technically not gonna tell you what to do. Shoot manual.

What I did was I actually did a test. I used the Canon 580EX II. We ran a simple test just to prove this point. Let’s talk about how we did it. We’re using the 580EX II, we used standard Duracell and Eneloop rechargeable batteries. We ran the test three times with each just to make sure, like we didn’t want anybody to doubt the results, okay? Each time we used brand new batteries, either freshly recharged Eneloops or brand new Duracells.

With each test procedure, here it was. We had Olivia sitting there, we set up a little clam shell lighting set up, we had the camera on a tripod so that way nothing would change, okay? We’re using manual and TTL exposures on the flash and we set those exposures basically to be identical across the board. That way when a manual flash fired, it was the same exposure as when the TTL fired. We did a manual test first, we did the TTL test second.

Okay, so manual was tested third and then we ran the same test three different times with each set of batteries and with the exact same results. Now, the numbers slightly varied based on how old the batteries were, like whether the Eneloops were a new set of Eneloops versus an old set, but the numbers were identical in the way that they progressed, okay?

Does TTL use more power and does it slow down your recycle time? Yes. If your camera, if your flash is firing a pre-flash to gauge exposure it will indeed use power and it will indeed slow down the recycle time. If you don’t believe, run the test yourselves. Guys, we’ve done it six times here just to show you and we have all the video footage there to prove it and everything, so please take my word for it and don’t waste your time.