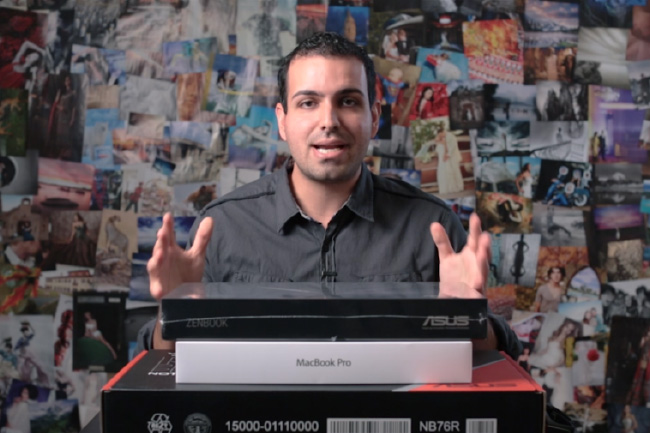 Our Favorite Laptops for Photographers, Videographers and Creative Professionals

Our Favorite Laptops for Creative Professionals

A lot of you have asked the question, “What computers do you use and recommend for photography?” We felt like it was about time that we actually answered this question. In this article, we are going to walk through the laptops we use in the studio and what we use them for. However, don’t worry, we will be reviewing each of these laptops in complete detail in their own articles as well.

For now, let’s first check out the video below:

Watch the Video on Our Favorite Laptops for Creative Professionals

A History On Our Computer Purchasing Woes

Asus is our favorite Windows based computing platform. In case you are wondering why, let’s walk through our computer purchasing history since we started our studio 4 years back. Let me warn you upfront by saying that it isn’t a pretty history.

When we first started our studio, like any new business, we were completely cash starved. We had a lot of equipment to invest in, but not a lot of money to do the investing with. This was obviously a problem since we were starting a photography studio.

We decided to cut costs by purchasing less expensive computers, which enabled us to focus more on camera gear. Not exactly the best decision, but it was really the only decision we had. At that time, we heard the alluring call of HP (Hewlett Packard). Let me describe what this call sounds like:

“Hello world, we are Hewlett Packard. our computers look beautiful, yet they only cost a fraction of that of an Apple. Heck, they are even powerful too!”

We heard this call, and we fell head over heels for it. We purchased three 17″ HP laptops for each of the partners. Once we received our laptops, we knew exactly why they were so cheap. One of the laptops arrived DOA, another had display issues (tons of dead pixels), and the third was working properly. HP replaced the DOA machine and the dead pixel machine and within another week we were up and running.

By 6 months into ownership, all three machines had gone back for major repairs at least once. Within 1 year, simple mechanical components began to fail. For instance, one of the laptops display hinges completely broke off preventing the display from closing/opening. By 1 year, all three machines had gone back to HP at least twice for repair, some three times. After our 1 year warranty was up, they started dropping like flies and within 18 months, none of them were functional.

Had this been one computer, it would have been understandable. But, it was all three of our computers! We vowed never to purchase HP again.

We then made the move to Dell. Dell’s machines were vastly superior to HP, although they still weren’t as reliable as we would have hoped. They were a bit more expensive overall, and often times we ran into issues purchasing them with the hardware that we wanted or needed.

Our failing point here was dealing with Dell’s customer service. While they were nice over the phone, Dells’ customer service and techs seemed to be completely disjointed. We would send computers back for repair, only to receive them back in the same condition sent. It was something we couldn’t deal with as a growing studio.

So, we bit the bullet and moved to Apple. It wasn’t the most calculated decision, but by this point we were just tired of dealing with IT issues when we had a business to focus on. This also turned out not to be the best decision for the studio.

Apple’s machines were significantly more expensive, we are talking 2 to 3 times as much as their PC counterparts. However, we didn’t mind so much given that their hardware was top-notch. We have rarely if ever had hardware issues with Apple computers. That in and of itself was amazing.

The problem when we switched to Apple was that it was too sudden. We had established a workflow and switching to an operating system that none of us were comfortable using was like throwing a wrench into the cogs of a massive machine. Productivity came to a stand still as we were frequently trying to figure out the operating system itself. I know it sounds silly given that Apple is supposed to be incredibly simple, but it isn’t really that simple when you have used Windows/PC your entire life.

We sold 2 of our 3 Macbooks and kept the third one primarily for location shoots and client presentations.

At this point, I took a bit of a risk. Back in high school, I actually used to be a tech/system builder for Comp USA (who have long since closed all of their retail stores). I remember that we always used to use ASUS motherboards and components because they were reliable and high quality. The Asus G73SW was available at Costco with impressive specs, and I thought, “Why not give it a try? After all, I can always just return it if it doesn’t work well given that this is Costco.”

I got it back to the studio, set it up, and was out the gate at blazing fast speeds (for a laptop). It had a great screen which actually calibrated extremely well too! While it was large, the overall design did a great job in dispersing heat (which is important for long-term reliability.)

We purchased another Asus, then another. Now in the studio we have two G73SWs, we have four G74SXs and now we have our 7th computer in the series, the G75VW. We haven’t had any major issues with any of these machines for nearly 2 years! Hence, for Windows computing, we will always use Asus machines. That is, so long as they keep up the great work in creating powerful and reliable machines!

Now let’s talk about each of these laptops and what we use them for. 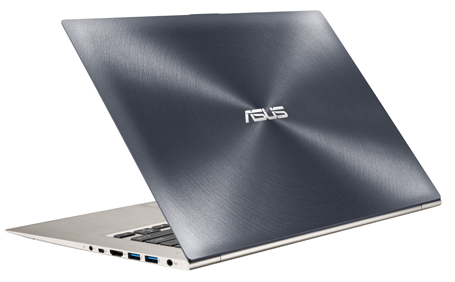 Class: Ultrabook (Ultra-portable notebook)
Why we love it : This new Asus Zenbook is our third in the studio. When it comes to ultra-portable notebooks, this is truly the best-in-class as it is the only Ultrabook that has a dedicated graphics card. It is also upgradeable in terms of RAM and the Hard Drive. It has a 1920x1080p full HD screen on an 13″ IPS display which is second only to the new MacBook Air Retina. Either way, the display is wonderful and is perfectly suitable for color correction/grading once calibrated.

What we use it for : These three notebooks are generally taken out of the studio when we are doing extensive travelling. They are perfect on-the-go, and the key feature here is that they are powerful enough for more than just basic computing (we can’t say the same thing for the MacBook Air). It is wonderful to have a ultra-portable laptop that when needed can also be used for post processing photos. (Doesn’t hurt that the dedicated graphics are also good for gamers… hint hint)

Class: Laptop
Why we love it : For presentational purposes, nothing beats the MacBook Pro. Apple’s designs are simply beautiful and the Retina display is brilliant for displaying and reviewing photos. The components are powerful, and it actually boasts the quickest processor of all the laptops we use in the studio. However, its steep price and lack of upgradeability make it a tough pill to swallow.
What we use it for : We frequently use our MacBooks when we need to shoot tethered and display our images to clients for review. Some might wonder if the Retina display was made exclusively for this use.

Because of the lack of options/upgradeability when it comes to hardware, it isn’t our go to choice as a workstation machine. Without a doubt, it is a quick machine. But, it particularly suffers in comparison to the G74SX/G75VW when it comes to editing video in Premiere with GPU enabled acceleration. However, we do have staff that prefer OSX over Windows. Hence despite the drawbacks, they use our MacBooks for that reason. This is really more of a preferential decision that you would have to make for yourself.

Class: Mobile Workstation
Why we love it : The Asus G75VW is all about raw processing power and upgradeability. The main key feature is that it boasts a 3GB dedicated NVidia GeForce 670M video card. After a simple hack, this video card is wonderful for running Adobe Premiere w/ GPU Acceleration which is absolutely crucial for extensive editing/color grading.

We run these laptops with 16GB ram and dual (that’s right, 2x) 512GB Crucial M4 SSDs. So they are blazing fast machines that are perfect for post processing, video editing, design, etc.

What we use it for : This new G75VW makes our 7th G7 series laptop in the studio. These machines are our in-studio still editing production work horses. Each member of our production team has their own G7 series laptop, which is great since often times they prefer or have to work off-site.

They also do a great job editing video on location when we don’t have our full editing workstation available. In fact, our studio along with two of our friend’s studios (who all use Adobe Premiere), have switched from MacBook Pros to the G7 series laptops for same-day-edit wedding shoots.

Unfortunately, Asus really isn’t mentioned much in the world of creative professionals, but they definitely should be! Hopefully this article will bring a little light to these great machines.