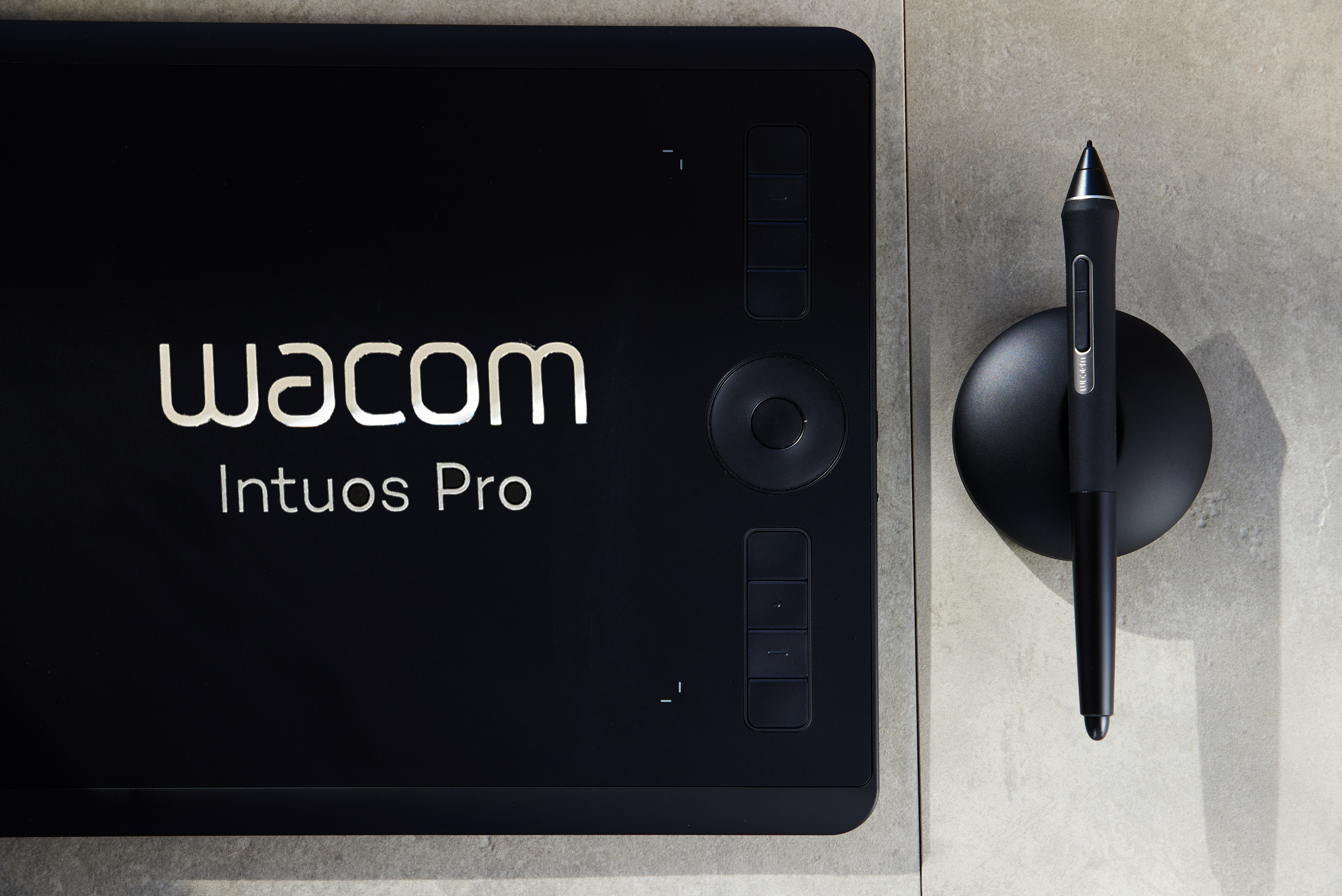 Given the inordinate amount of time photographers are apt to spend in post processing, it goes without challenge that anything which makes that time more productive, more efficient, faster and more enjoyable, is worthy of investigation and implementation. And despite the proliferation of editing tools like Loupedeck (poor) and Palette (actually very good), still nothing beats the utility of a good pen tablet, and when it comes to such tablets, Wacom’s Intuos Pro line has smugly been shoulders above the rest. And there’s a new one: Wacom Intuos Pro Medium

When the Intuos 5 became the Intuos Pro there was a discernible change in the product, and now the Intuos pro has been updated yet again. There is a difference, however, between updates and upgrades; the the former being no guarantee of the latter. As such, I’ve spent some 50+ hours using the new Intuos Pro with Capture One, Photoshop, & Lightroom, to see how it sits in a world of more options and better entry-level offerings.

In the process we’ll address the following key points:

[RELATED: How To Set Up Your Wacom Pen For Better Use In Photoshop, Capture One, & Lightroom] 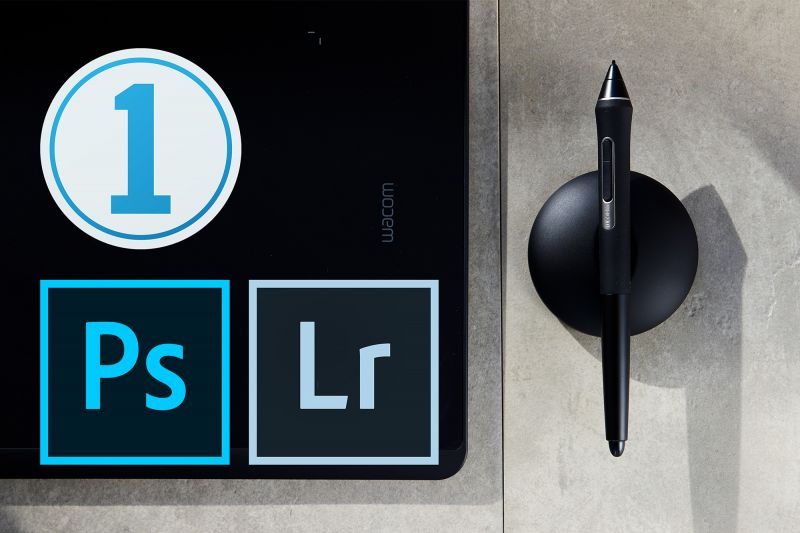 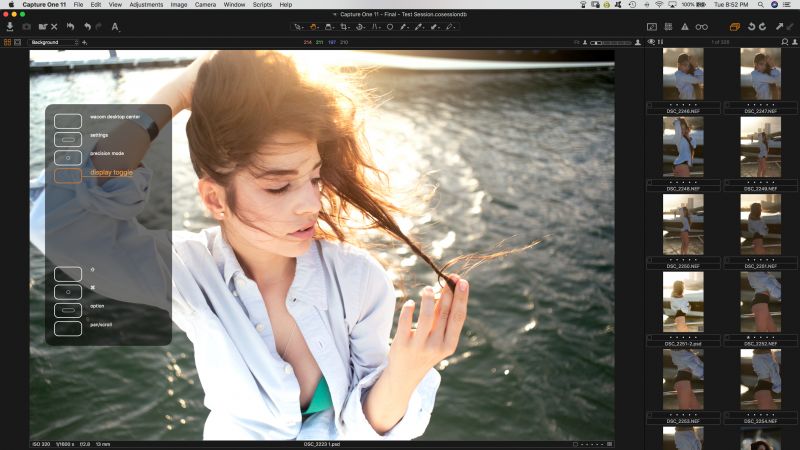 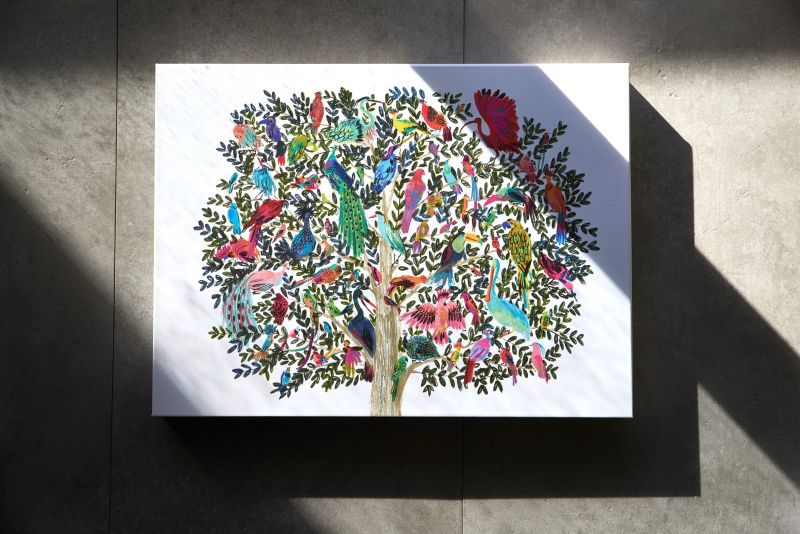 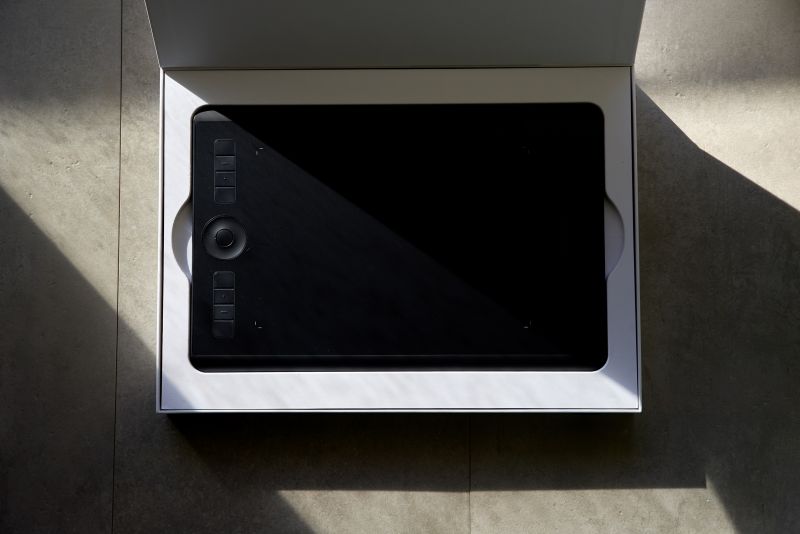 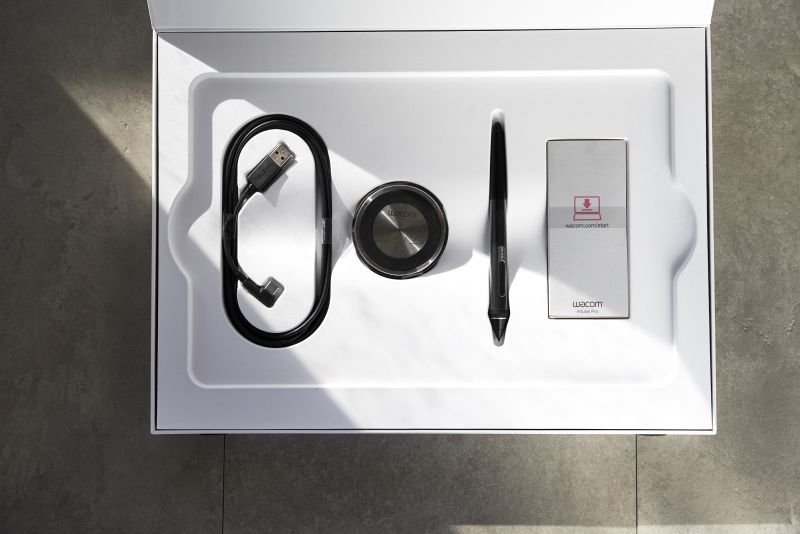 No one would accuse the previous generation of Intuos Pro of being unsightly or ungainly, but the new unit has made significant strides in presence and aesthetics. It’s smaller, thinner, lighter, and more refined in panel design. It’s complete with black anodized aluminum and fiberglass composite resin has fewer panel lines, and it feels resilient despite being a mere 8mm thick.

Simply put, it’s svelte. It looks like the kind of device that would be at home in a Stockholm loft costing many, many Krona.

For the purpose of photo retouching, the larger units are typically a waste of both desk real estate and money, as what you’re paying for is a larger active area, an area we minimize anyway via mapping, to something much smaller than even the smallest tablet active areas. This reason behind this –for those new to the arena– is that photo retouching, unlike drawing or painting, isn’t done via movement from the shoulder or elbow, but from small wrist movements.

That said, some smaller tablet designs are problematic as they don’t allow for comfortable wrist resting, but this is a problem the Intuos Pro Medium does not have.

The Wacom Intuos Pro, like the Cintiq Pro and Mobile Studio Pro above it, uses the new Intuos Pro Pen 2. It has a great ergonomical design that feels light in the hand. It has two programable buttons on the pen shaft and the typical eraser on the back.

It’s very responsive and allows for ease of use when doing detail work. The Intuos Pro and the Pro Pen 2 work together using EMR technology (Electromagnetic Resonance), which means the display is the active digitizer and the pen is the passive part. This is a good thing, despite some people suggesting AES is better, because here, the pen doesn’t need to be charged, it’s lighter, less expensive to replace, and unlike AES systems there is no delay in inputs so it feels immediate and natural. EMR jitter is also not a problem with this combination. 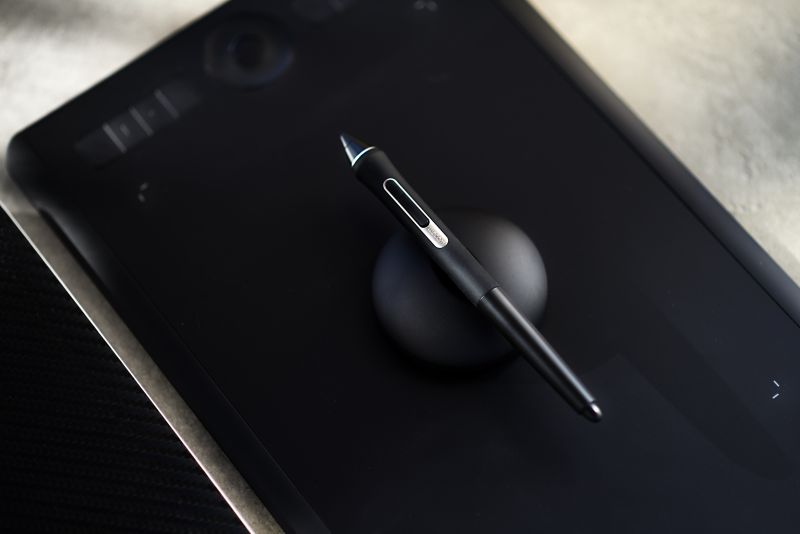 The new Pro also boasts 8192 pressure levels compare to the outgoing model’s 2048, which is far more than you’ll need, and for retouching work you’d be a minority if you could really tell the difference. For 99% of photographers, the 1024 levels found in lower-end tablets of 4 years ago are fine. Animators and digital painters and so on may find this a welcome  benefit though.

You may also notice that the pen base and stand has also be reworked. It’s weighted, and like the last generation, it houses the extra nibs which come in a variety of options. 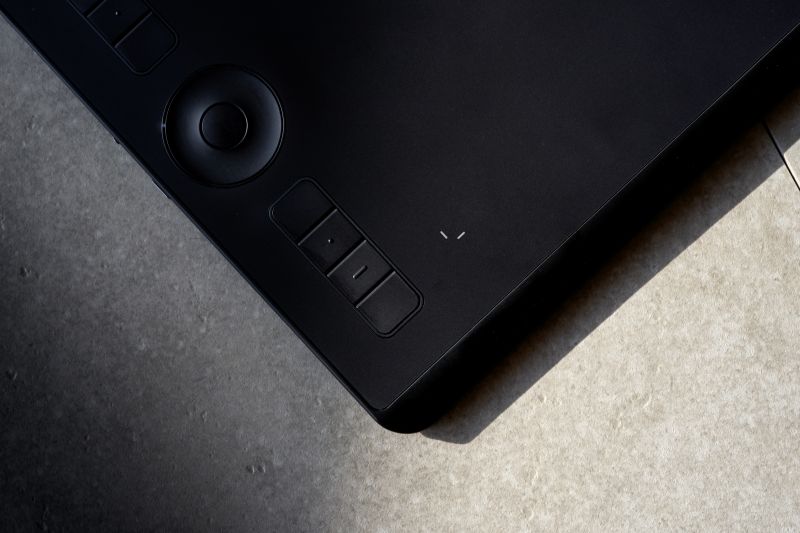 The surface of the Intuos pro is a little different, but most won’t notice. A nice feature is that you can swap out the surface plate for ones of varying textures and resistances. The plates are only about $30 for Medium tablets and the Intuos Pro Medium comes with sample sheets to see which you’d like best. Most graphic artists I know like more drag and feedback and most photographers I know like them really smooth. You can even buy a clear overlay if you want a totally smooth feeling without inputting the time to wear down the surface – and your nibs while you’re at it. 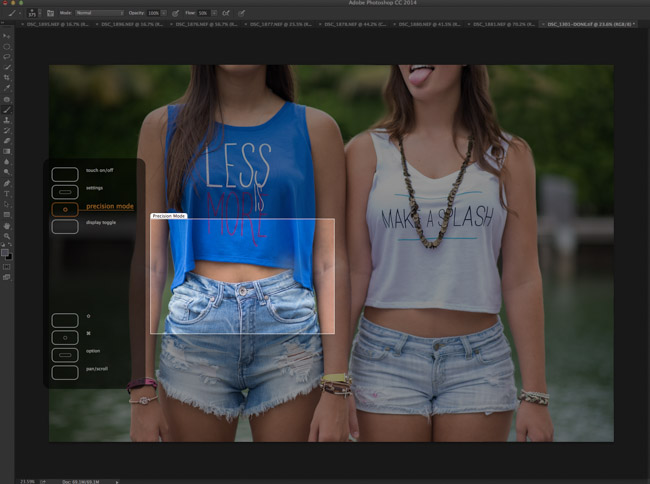 But the accuracy of the tablet surface and the pen do feel noticeably better than the last generation, and reverting back makes it all the more obvious . This is perhaps due to a myriad of things, like the re-worked pen being slimmer, and better performance of the edge coils sending their signal back to the digitizer. But beyond that there’s the matter of resolution.

While ‘resolution’ isn’t something we typically associate with a device without a screen, it exists in a manner of speaking. In regards to tablets, it refers to the number of lines that can be drawn per inch (LPI) on the active area, and on the Intuos Medium Pro and Large it’s about 5,080 versus the 2,540 of other smaller ones. 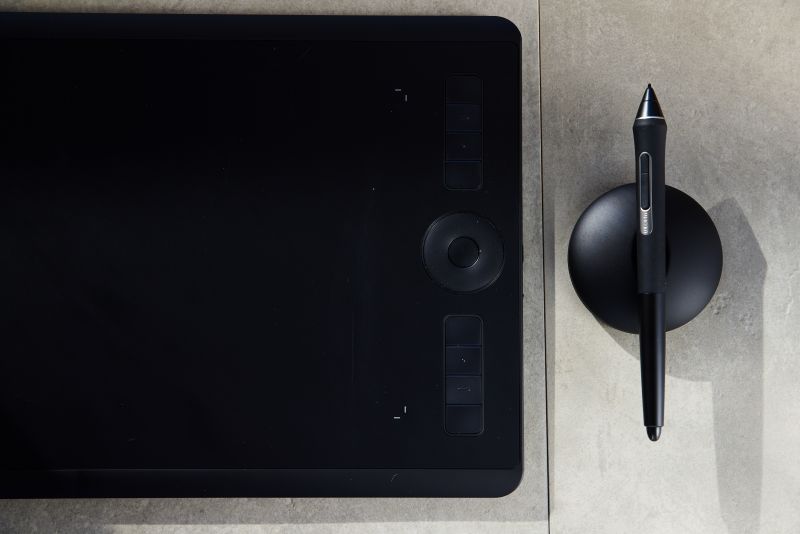 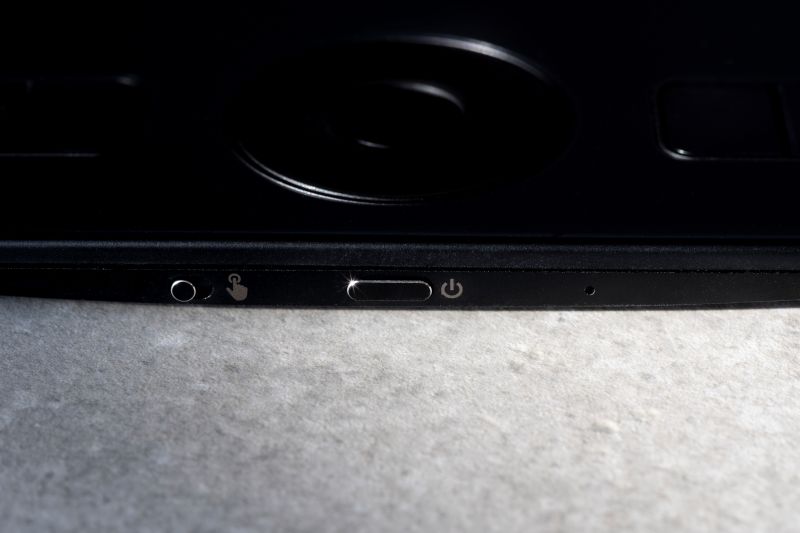 Something else to consider is the multi-touch capability of whatever tablet you choose. Some hate it, some love it, and with each generation Wacom’s multi-touch works better and better. Palm rejection has come so far as to be a total non-issue, and for those used to using Apple’s tackpad, the tablet can take it’s place in many ways. With the Intuos Pro you can easily switch its touch capabilities on and off with a switch on the side, so you’ve got the best of both worlds there (see image above). 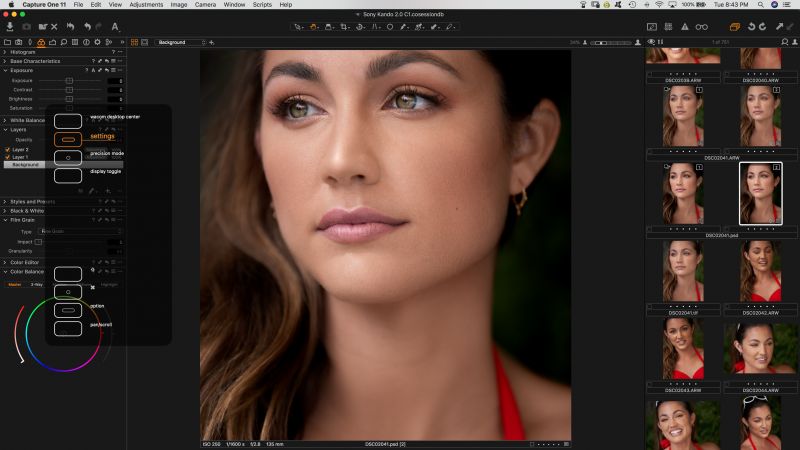 Like the outgoing Pro, the Express Key and Wheel orientation is a major plus compared to lower-end models, if for no other reason than if just makes sense. Some other tablets have the buttons on the top of the tablet which tends to require breaking a stream of actions in order to activate them, but a hand can be dedicated to hover over the keys on the pro without any interference of the active tablet area. And that’s either a right or left hand, because the location of the keys allows the tablet to be flipped for use by both right handed people and southpaws. Again, something that cannot be done with the others.

Suffice to say, having the buttons and wheel here just make sense of movement, as you set the buttons to an appropriate selection and then it’s just go, go, go. 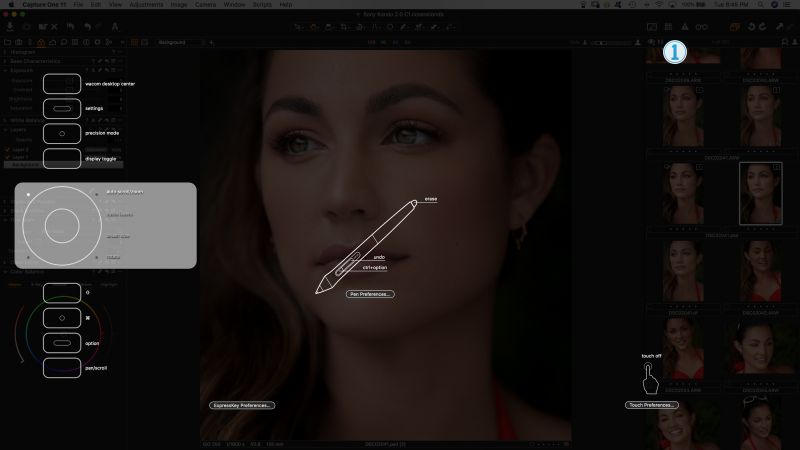 There are 9 buttons to be depressed and 2 on the Pen, and lightly touching the keys but not pressing them will bring up a translucent screen that will show you what it does, if you like. But of course the touch wheel can be configured many different ways to control brush size to cycling layers, and then there’s the option of setting up a Radial menu for even more functionality.

The level to which this tablet can be customized is truly vast, and in time it tends to evolve, so it’s great that it allows the space to do so. And you can do it all from the preferences menu, in which you can make different set-ups for different applications. I’ll use something different for Photoshop, Capture One, Lightroom, and Affinity, and if you want to know how a sample set up of this tablet looks for those applications check the article below:

How To Set Up Your Wacom Pen For Better Use In Photoshop, Capture One, & Lightroom 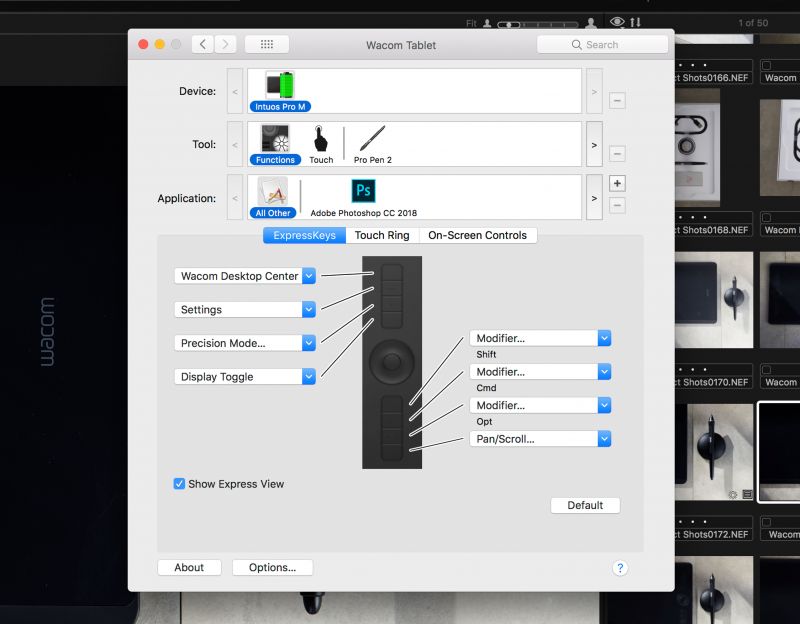 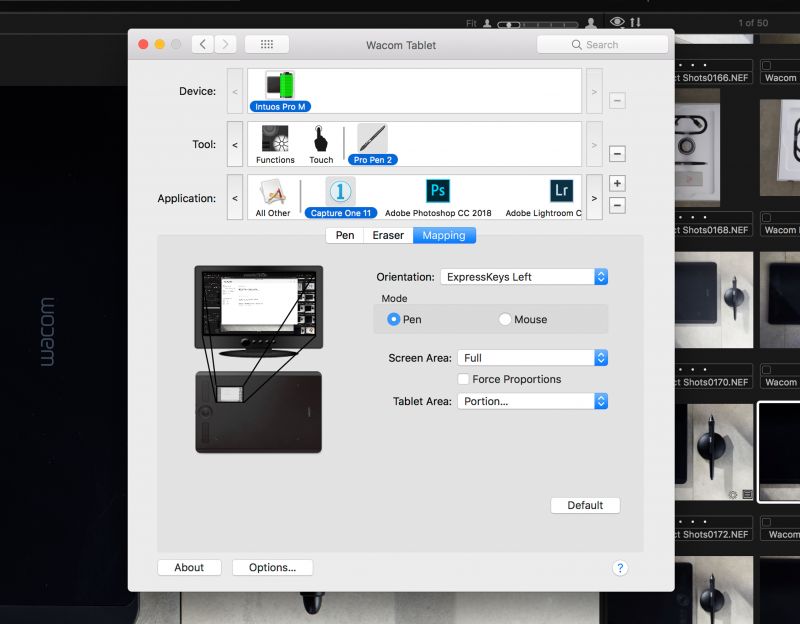 One thing touched upon above that you’ll notice if you click that link, is that the recommendation is to map the computer screen to a smaller portion of the tablet so that you can essentially glide across the breadth of an image with a small hand movement, as that fights fatigue, and the Intuos Pro Medium allows for a mapped area that makes it very easy to rest your hand on the tablet while you work. 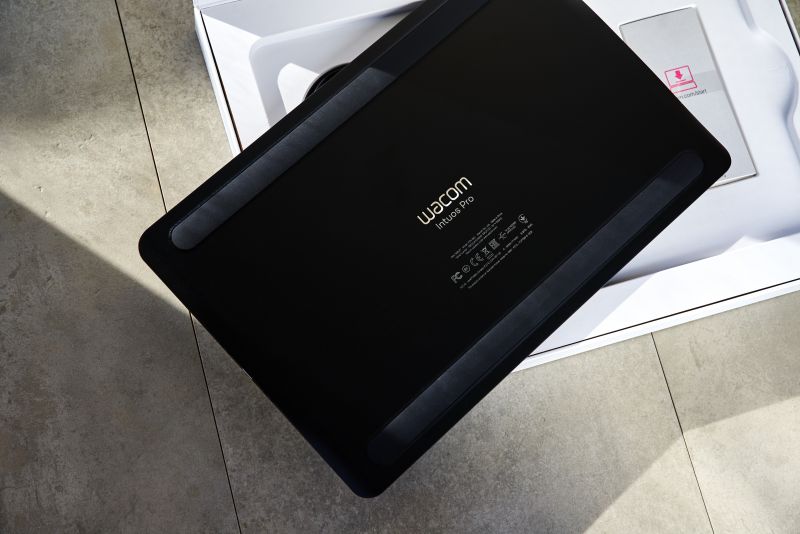 There has been considerable change in this department as now the Intuos Pro line comes with Bluetooth wireless capability built-in. While the last generation came with it you had to use a dongle on the computer which would occupy one of your ports and was prone to getting lost. This is no longer and issue, and Bluetooth connectivity is a breeze and strong. Accurate, on the other hand, not as much.

While many have said there is no lag, this seems to be computer dependent to a degree. With an older iMac I noticed some lag (minimal) and with a newer MacBook Pro there was much much less, though still there if you’re picky. That said, you do get used to it, and it’s still more accurate and less laggy than before. But, you can always use it wired for top results.

You’ll notice with said cable that this time around Wacom has gone for a USB-C type port, but it does supply cables that are backwards compatible for computers without that port type. This contributes to the slimness of the device, and that it seems to charge quickly. I don’t have a number of hours for battery life, but you won’t run out of juice after a full day of editing.

It’s brilliant. It’s a really lovely piece of hardware that will quickly become a staple of your workflow. Like a broken record I chant still that nothing will improve your photographic post processing like a graphic tablet, and this is the number one recommendation for the vast majority of users who are anything more than casual.

It sells for $349, and that’s not an inconsiderable cost, but it’s the kind of unit that will last you for years, level-up your work, and one you’ll use with every shoot. How many pieces of gear can we as photographers say that about? So while the price isn’t low, the value proposition here is high.

For photographers, it is the quintessential tool for post processing.

Nikon's Financial Report Reveals Progress and Hope For The Future

What Is Focal Length? Here's What You Need To Know