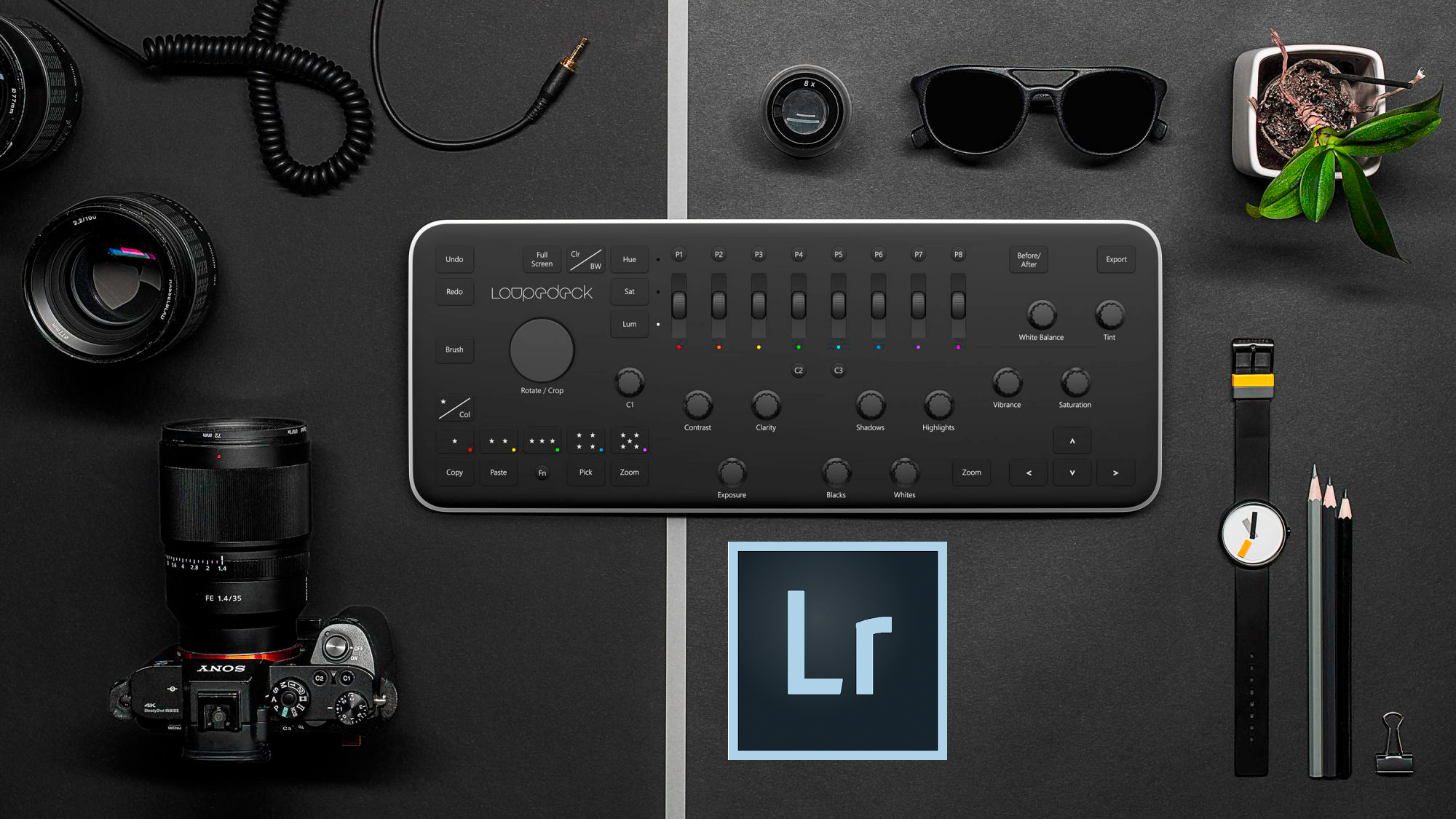 Loupedeck Review | A Thorough Review Of The Lightroom Controller Console

Few peripheral devices tend to cause the kind of stir we see for devices that look to offer an alternate solution to controlling Lightroom – a physical solution. That level of frenzy is typically reserved for big lens releases, but it appears that even for something as ubiquitous as Lightroom, there are legions of people who aren’t quite satisfied with its user experience, and that discontent has led to the creation of products like Palette, Pfixer, and now the most elegant of them all, Loupedeck.

Loupedeck absolutely is the most elegant of the lot. With its keyboard-esque design, free of clutter and fuss, black top and silver underside, you can see it being sold in an Apple store, and perhaps is to be expected given its Finnish origin. 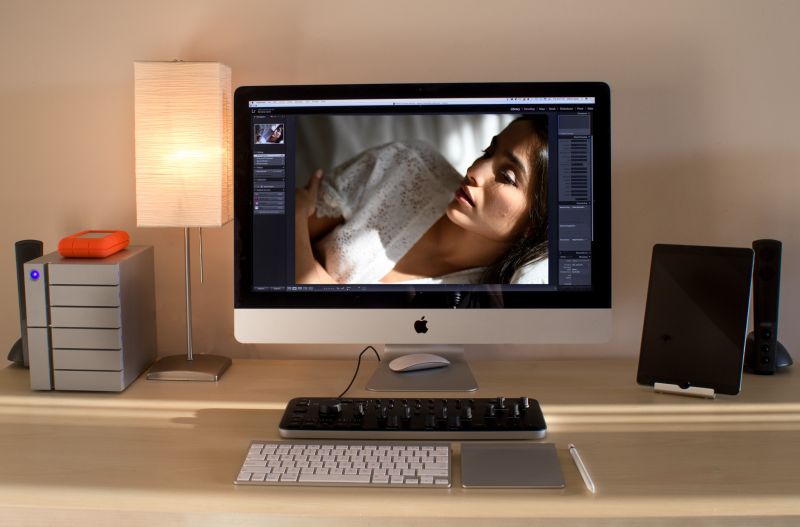 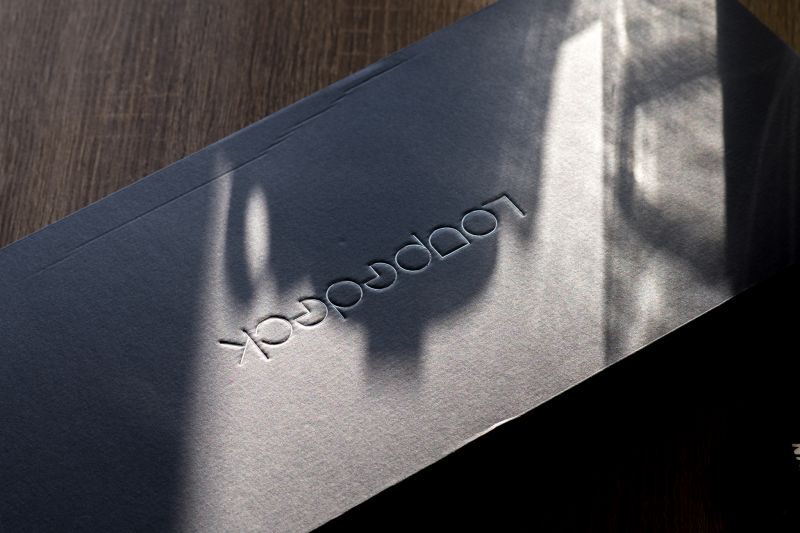 Loupedeck, like Pfixer and Palette, is a piece of hardware, a physical interface with knobs, buttons, and sliders, and all of which correspond to altering a function/utilizing a tool with Adobe Lightroom. What it aims to do is make the process of editing within LR a more intuitive, precise, and fast endeavor. Looking at the layout you can’t help but think it could actually be all of that because where Loupedeck really differs is that it’s not meant to be a jack of all trades that can be used with different software, but purpose built for Adobe’s Lightroom; each dial, button and knob is dedicated to a feature within it.

Anyone who spends a lot of time in Lightroom knows it’s rather intuitive on its own, but controlling all from a mouse or trackpad isn’t always the simplest thing, as the sliders are small, and it can require a meticulous touch. The Loupedeck controller brings a tactile element to controlling Lightroom, bringing the modules off the screen and into hand.  It sounds great.

What Loupedeck Can Do 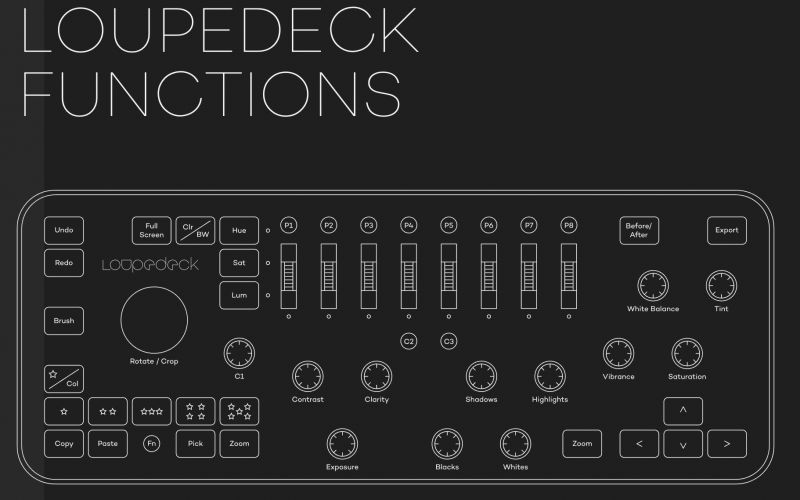 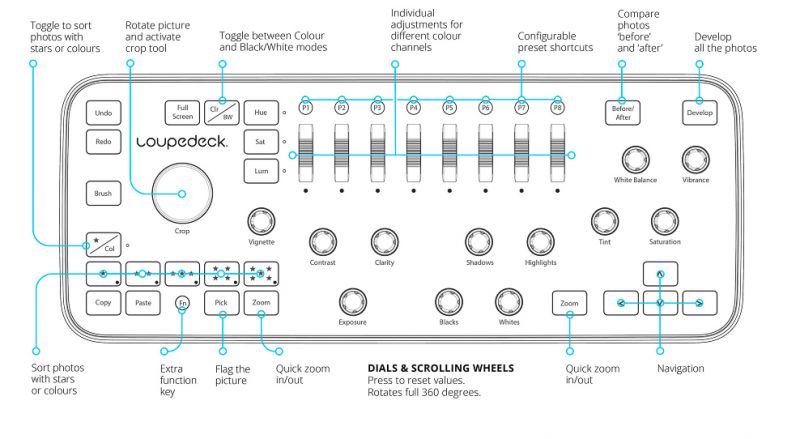 It can do a lot. Loupedeck’s interface has 58 separate buttons/knobs/wheels, and with a press of a function button you can almost double that number as the function button allows many buttons to be multi-faceted. You’re able to crop, rotate, star rate, flag, copy/paste, zoom, undo, redo, see before/after, bring up the export dialogue, toggle screen modes, and zoom.

There are also wheels that correspond to specific colors which can be used to adjust hue, saturation and luminosity, and dials that correspond to each primary feature of the Develop Module – think Exposure, Clarity, Highlights, and so on. You can also use 8 preset buttons to apply your favorite presets – though you’ll have to remember which button corresponds to which preset, which is annoying. So, that’s a long list of functions, and most of them can be controlled with precision that’s just too difficult to do with a mouse. But frankly, the praise tapers off from here. 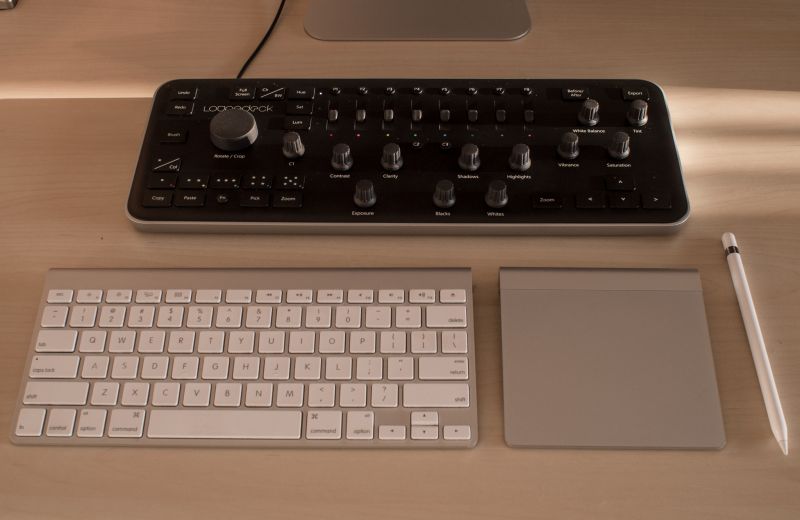 Before moving forward, it needs to be addressed that the Loupedeck isn’t cheap. At near-as-makes-no-difference $300, it’s sold as a premium product, and thus you’d expect premium build, attention to detail, and well thought-out functionality. However, in many respects I found it to be lacking.

The device is decently weighted and doesn’t feel flimsy on your desk, nor do the buttons or dials feel as though they’re about to pop off. The dials are also not motorized, but that’s okay; they rotate continuously so there’s no ‘end’ and that allows you to be faster, generally. Each of the dials also can be clicked by depressing them, and that acts as a reset for your adjustment, which is lovely. The rest of the build isn’t quite as admirable.

It lacks feet at the back which would be so utterly useful to elevate the Loupedeck like a keyboard, and that just makes it more difficult to navigate. Imagine typing on a flat surface and you’ll get an idea. It’s a little angled but not enough. 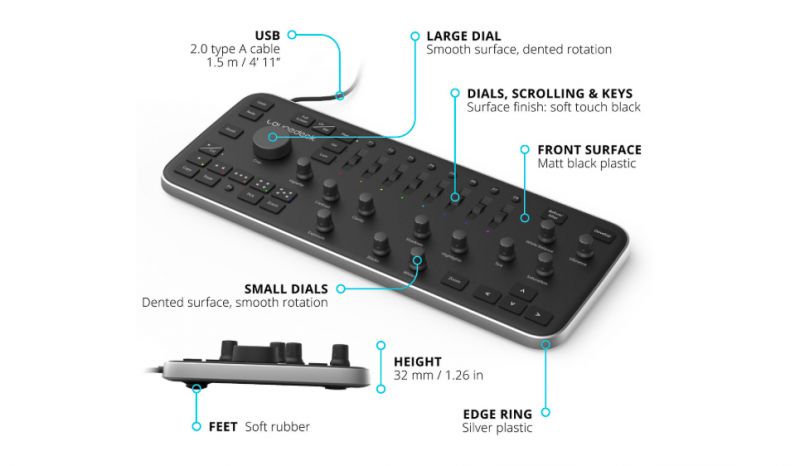 But this lack of attention to the underside continues with the USB cable. It has a guided groove it should be threaded through and it just doesn’t stay there, requiring frequent re-adjustment. It’s such a strange design choice it makes you wonder if there’s a functional reason for it. Then again, for $300 they’d have been much better served to make it wireless. I mean, an Intuos Pro can be had for $250, and it just feels solid, has gesture control with 2 thousand levels of sensitivity and it’s wireless.

Moving on, the most disappointing aspect to the build of the device has to be the buttons. When you push on an Apple keyboard or any good keyboard or device today, there’s authority in the button press, and generally you can hit with confidence and feedback, neither of which you get with Loupedeck.

The buttons move around when pressed and if you hit a corner of the button it may seem like you’ve registered the action but nothing will happen. It’s really poor execution here and doesn’t inspire confidence when the keys if you’re not looking right at them. You need to hit right in the center to ensure you’ll get the response, and that’s just worthy of a head shake in a $300 device that’s entirely based upon the physical interface. See example below:

The Loupedeck does seem like a rather simple piece of tech, and that’s not a bad thing. The simplicity and focused purpose is a good thing, and it would seem like they have decent software which would allow for useful adjustments to be made through firmware down the line, which is something we hope they take advantage of. 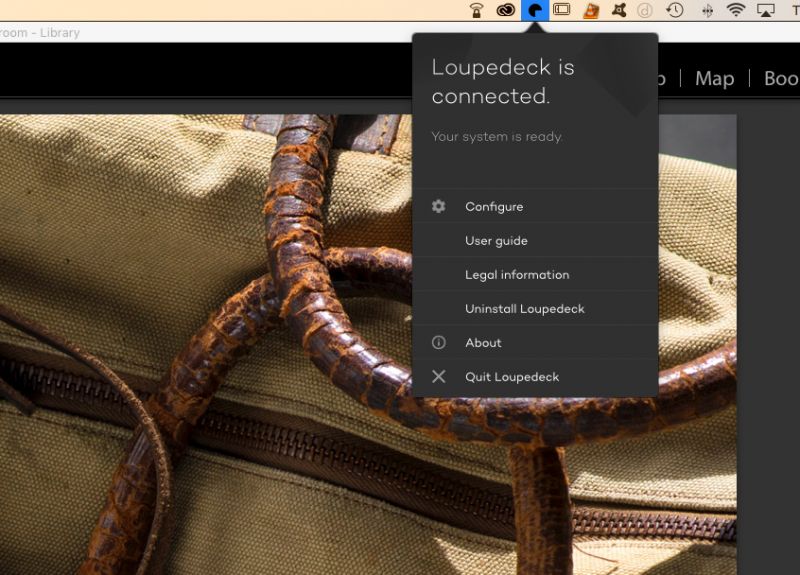 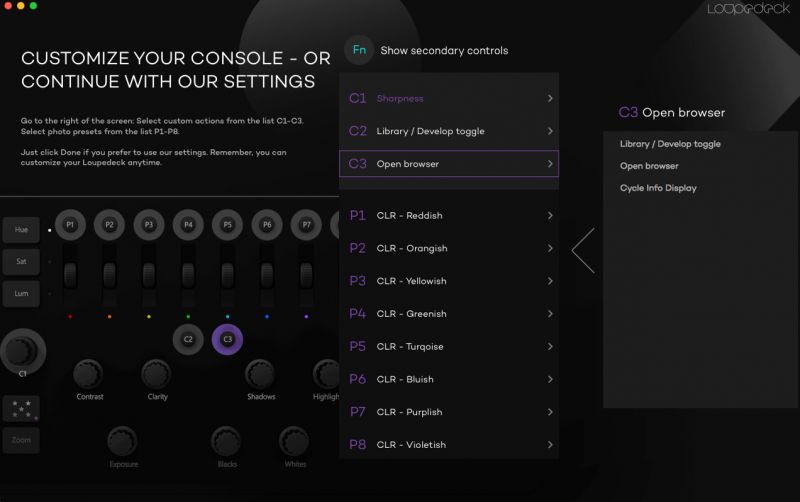 Some of the issues with Loupedeck in use is that it makes you wonder precisely which users they had in mind, because there is some inconsistency with it that leaves room to wonder. For example, a nice feature is that when you select the Brush Tool you can then use the dials to adjust the brush settings. So say you paint your brush adjustment but want to adjust exposure and saturation, you can use the dials for that, which is great and precise, but you can’t do that with graduated or radial filters.

Then there’s the Before/After button which brings up the side-by-side comparison view versus the view you’d get if you hit the backslash key, which would just toggle the image on screen between what it is now and what it started as. That can’t be changed, which is unfortunate, especially when using Lightroom on smaller screens like laptops where the images are very small when placed beside one another.

But there are more curious behavior too, like the fact you can’t make any adjustments in the Library Module, so those of us who like to use the Quick Adjustments panel are just out of luck, and the device’s control is relegated to the Develop Module. 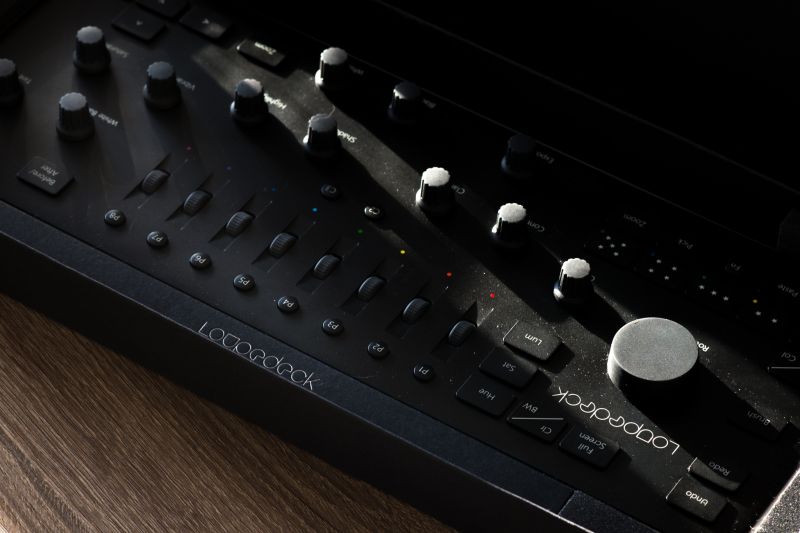 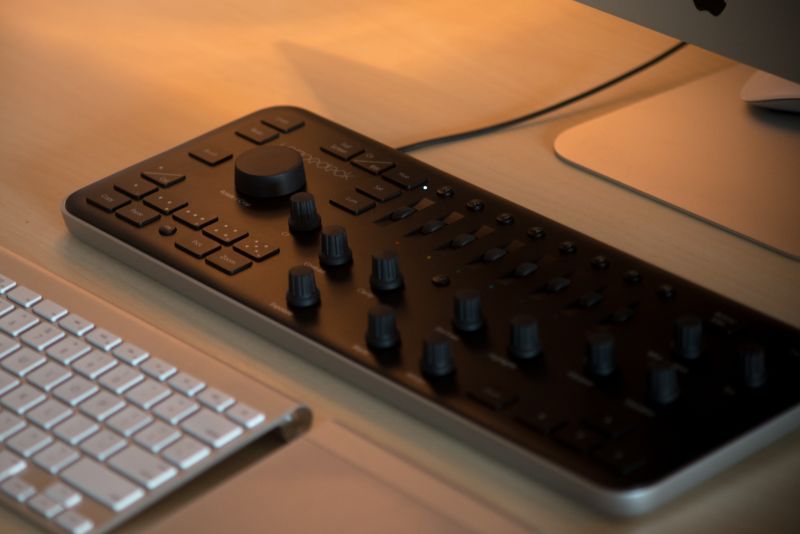 Then there’s the Rotate/Crop dial which seems like it would be brilliant for precision but then they only allow you to adjust via stepped notches/degrees, thereby removing precision altogether. Cropping is a precise endeavor and taking that away leaves you with something essentially devoid of use. Also, in my testing over months I found numerous occasions when the Crop dial wouldn’t work when it was depressed in order to execute the crop, and this wouldn’t be fixed until LR was restarted.

On the topic of precision, however, that is probably the strongest suit in Loupedeck’s hand, because the dials do have a long ‘throw’ with the exception of the Crop dial you can really fine tune. One just wishes there was a way to adjust the sensitivity of the dials. Sometimes it feels you’re turning them for ages to get where you want. Does that allow for more precision? Yes, so it’s a trade off, but hence giving the user the ability to set that sensitivity would be useful.

If you haven’t just skipped ahead to this section I’m sure you know where I’m going with this, that Loupedeck has its merits but falls short, particularly given the price.

We are power Lightroom users here at SLRL, and Lightroom education and use is a bit dear to us, so I wanted to like Loupedeck and was excited for something to boost LR productivity (God knows it needs all the speed help it can get), and perhaps went in with hopes a bit too high. Can Loupedeck be good for some? Yes, and there are times when you want to really fine tune an image it would be brilliant. You really can control the sliders in a way a mouse just can’t, but the thing is, you’ll still need a mouse and keyboard – the Loupedeck is no supplement, and for many, just adds clutter and isn’t as effective.

Consider, if you wanted to use the brush, you can select it with the Loupedeck, but you’ll still need to use the mouse, which makes that dedicated button an odd choice on the designers’ end. Then let’s say you want to view Grid mode, well you’d need the mouse or keyboard again as Loupedeck just doesn’t offer that option. And that’s just it, one of the inherit problems with these kinds of devices is that it does require you to look away from the screen when you’re editing, and adds more complexity to your set-up since you need it AND a mouse and keyboard – that just slows everything down. 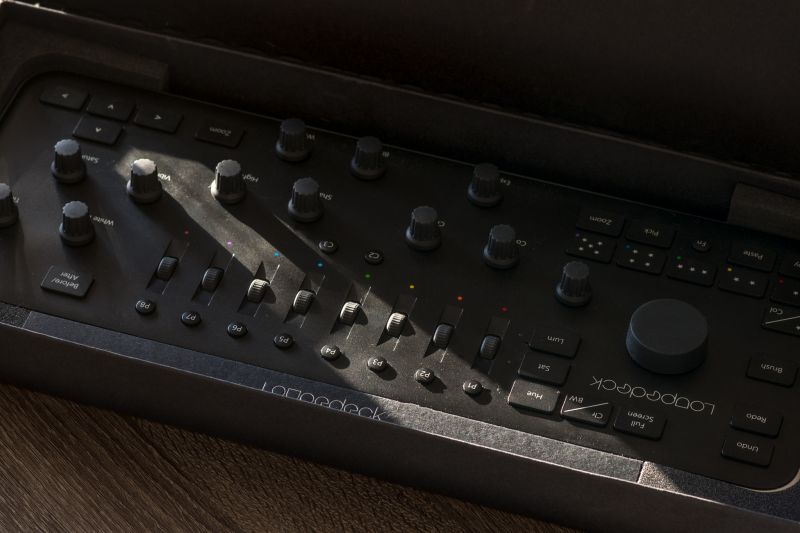 If you’re the type to work on one image for a while then it may not bother you as much, but for power users who look for speed, it’s problematic. It was marketed as something to help speed up a workflow, but I can’t see how it’ll really do that for most. Will you get familiar with the layout and instinctively know where certain things are? Yes, to an extent, but never completely. The spread of the buttons/dials is quite vast, and that makes it harder to dance over them and know where everything is by feel.

If you’re a strong typer and you’ve been using Lightroom for a while with a mouse and keyboard, you likely have a few hotkeys/shortcut buttons you have memorized and don’t need to look away from the screen much. If you belong to that group I can’t see Loupedeck being faster, and even if you don’t I can see Loupedeck being something you use for enjoyment and novelty but not something that will actually improve your performance.

It’s very difficult to recommend you all spend your hard earned cash on Loupedeck as it stands now. If the price point was dropped from $299 and it was wireless it would be a less jagged pill to swallow, but given my thorough time with it and the reasons above, I see it less a productivity tool and more as a novelty.

Quick Tip For Wedding Photographers: How to Pin a Boutonniere