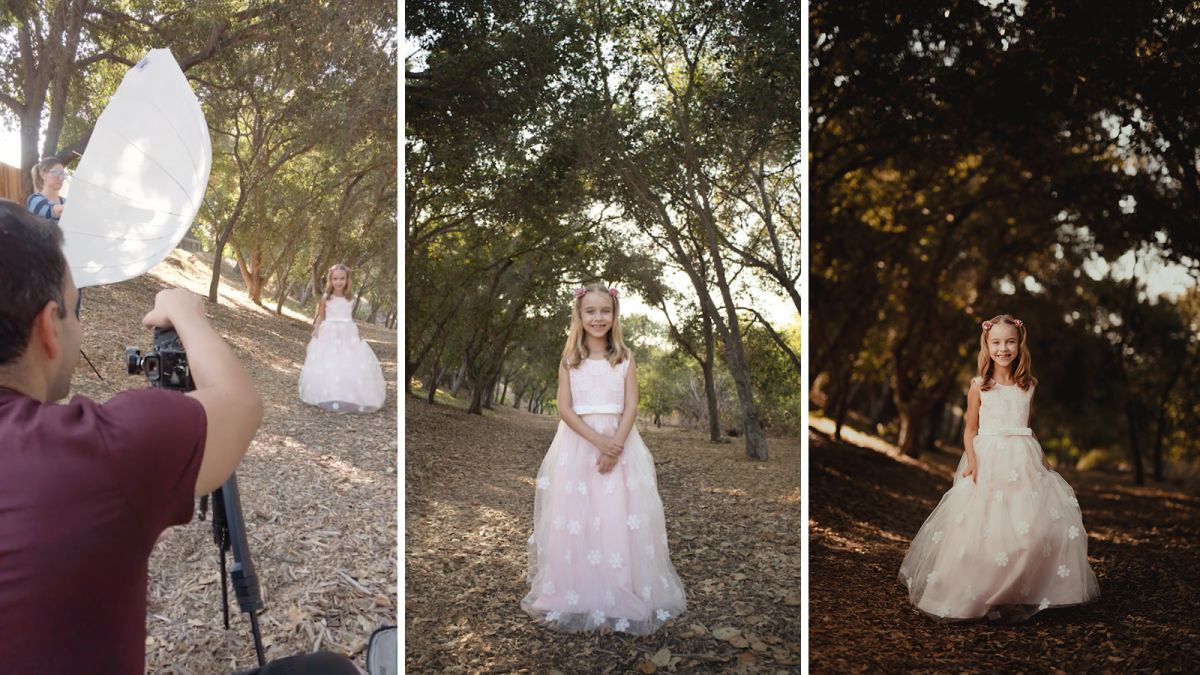 Tune in to our next episode: November 11th at 11AM PST!

In this article/video, we’re going to create a rich, Autumn-toned portrait, from start to finish. My goal is to make the image dark & moody, but I also want to add some warmth to it with a large, soft light source, one that’s powerful enough to light up our subject.

Okay. Let’s go ahead and dive straight in.

Before you pick up your camera or reach for your flashes, check out our C.A.M.P. framework and simplify your lighting process.

I decided early on that I wanted to set the aperture somewhere between f/1.4 and f/2 to leave the shot kind of very blurred in the background, and I knew I wanted to add quite a bit of light to her. The reason for this is so that I can use depth of field and lighting as compositional tools. What you’ll notice in this scene is that the sun is positioned up and to the left, causing light to fall across the scene.

Where you place your subject can make a big difference. For example, the hair light falling on my subject will change depending on where she’s standing. It’s important to think of these things because as we’re shooting, we essentially already have two to three light sources set up for us. We have the sun, which in this case offers a nice hair light and creates kind of a rim light. We also have the sky, which serves as the main light and illuminating her face. We also have other fill light that we’re getting from the scene. Basically, try to start in a spot that already offers good lighting options, and then simply add light to it (if necessary) to get to your final image.

You don’t need a tripod for this shot, but I’ve decided to use one to keep the composition steady throughout the entire session.

2. Dial In Your Ambient Exposure

As a natural light image, this setup works well and you can shoot this as is (see the image above, to the left). What I wanted to do, however, was set the intention for my photograph by going to the “A” in the CAMP framework and exposing the ambient light. As I mentioned before, I wanted to create a kind of a dark, rich autumn tone to the image, so I adjusted my ambient light and brought my shutter speed up to 1/2000. Of course, this meant that I’d have to use high speed sync on my flash, but that was fine.

Using a fast shutter speed (e.g. 1/2000) does a couple different things. First, it allows me to get the background exactly where I want it, which gives agency to my intentions as an artist. It also allows me to notice where the light is landing, specifically on my subject’s face. In this scene, I noticed that the light was coming in from the top left side. I decided to place my light kind of on the top left as well to simply add to the existing light direction.

At this point, we need to either modify or add light (or possibly both). In this scene, modification wouldn’t have worked, really, as I didn’t have any way to effectively reflect light. So, I added a Profoto B10 Plus and used a large modifier. 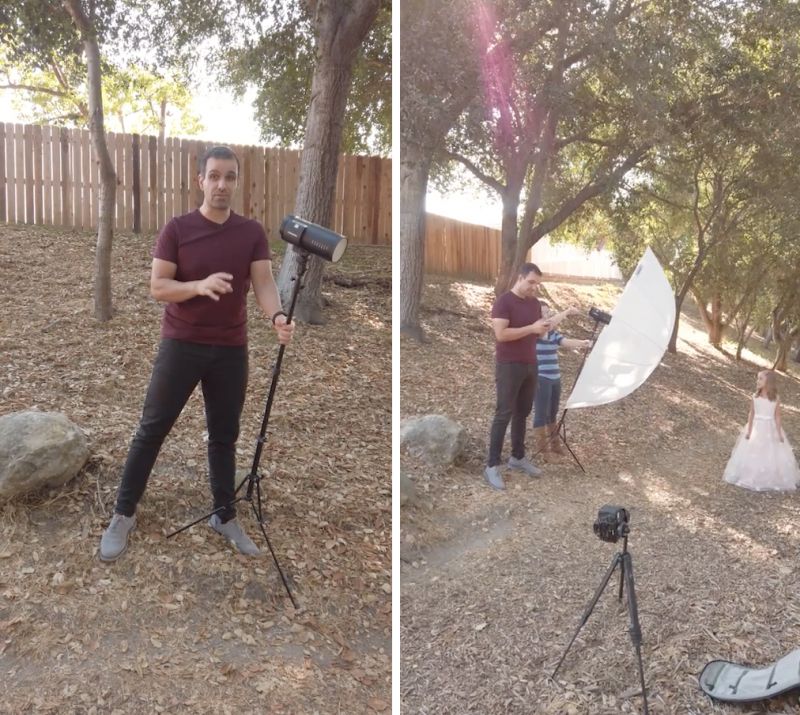 I used a deep umbrella in order to keep the light that I added to the scene very soft and natural looking. I wanted it to match the light coming in from the sky. When I took a test shot, I noticed that everything went bright. This happened because I had the shutter speed set to 1/2000, but I forgot to press sync on the remote and go to high speed. It was a quick and easy fix, but it’s something to look out for if you run into a similar situation.

All that’s left in this step is to choose our power. The benefit of using the CAMP framework is that it allows us to cover all of the important aspects of setting up a shot while working through one variable at a time. I recommend using the histogram and highlight alert to make sure that you’re good in terms of light and exposure. You should know immediately if any details are blown out or otherwise lost.

Please note: Although I used a Manfrotto Nano Stand with an umbrella for this shot, this is not the stand that I would say that you should work with if you’re shooting solo in a scene like this. Instead, you’re going to want to use something heavy duty, like a C-stand. You’ll also want to place the stand(s) in flat areas with sandbags to keep them secure and stable. Luckily, the subject’s mom is also a photographer who knew exactly what we were doing and she was able to help.

4. Pose and Capture the Portrait

All that’s left is to direct your subject into a pose, give cues to draw expressions, and capture the shot. I like to use live view to shoot these because the Canon 5D IV uses a pixel-based focus system. When I’m shooting with a wide-open aperture, live view on a 5D IV basically guarantees really sharp results each time. I finished off the image using our Mood Lightroom Preset Pack from Visual Flow Presets.

Hopefully, you found our tips on how to create rich & moody autumn portraits helpful. We started with a nice, natural light look and ended with our dramatic, autumn-tone image. The noticeable difference between these two shots really comes down to the intention of the photographer. I shot both images at the same time of day, but one simply features natural light while the other demonstrates how added light can transform an entire scene.

For more Profoto lighting tutorials, be sure to check out our Slice of Pye Series on their IGTV!