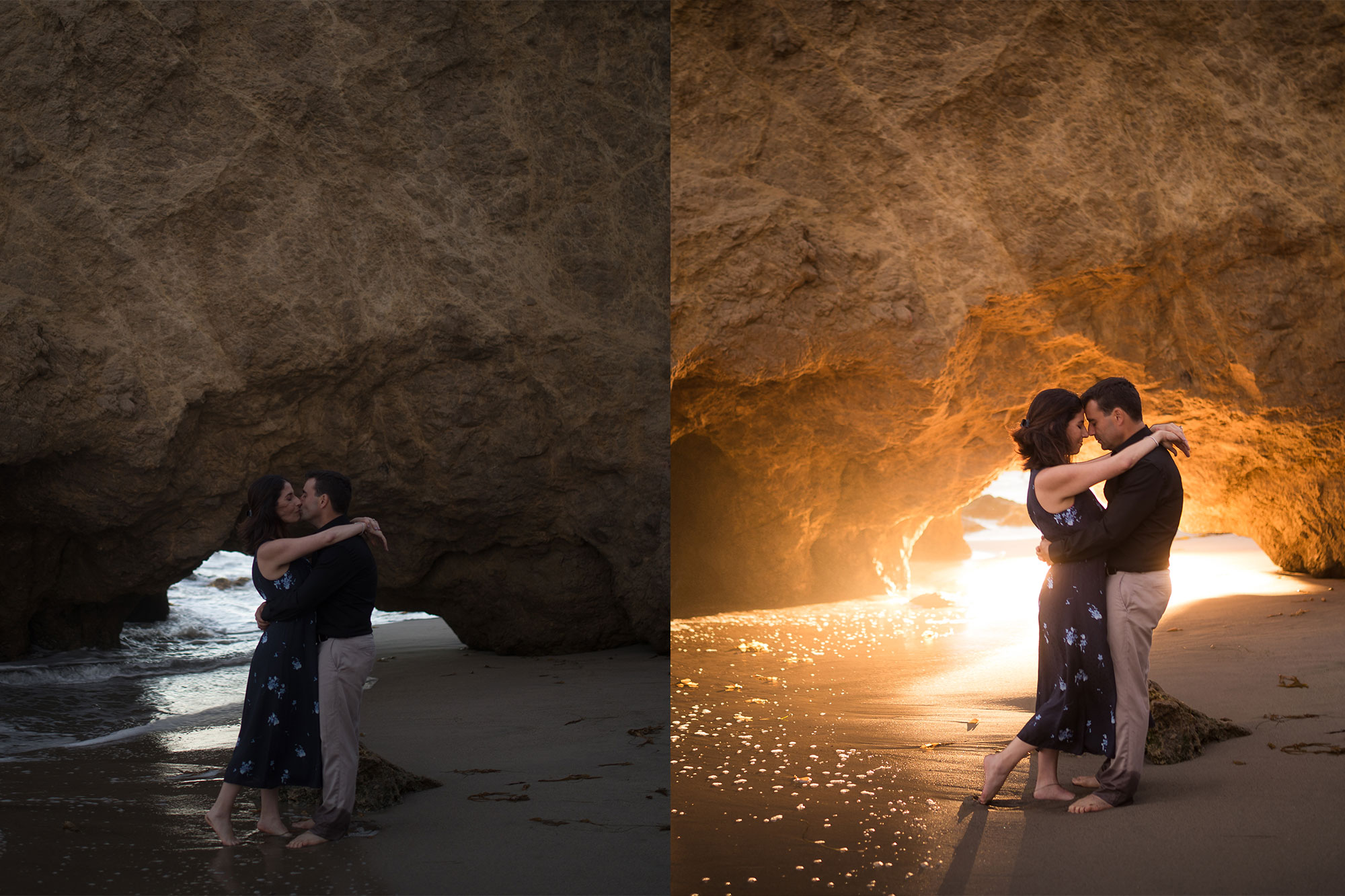 We are constantly chasing golden hour light, but we only get access to it for a short period of time. By studying how sunlight wraps objects and creates shadows, we can try to find background and scenes to re-create it in a convincing manner.

On a recent Malibu engagement session, I lost a lot of light due to the high cliffs of El Matador Beach and was forced to think quick on my feet to get those quintessential golden hour images that my clients desperately wanted. Equipped with 2 powerful strobes and a handy-dandy assistant, I set out to re-create the most powerful light source known to man: the sun.

This technique can be achieved with a variety of gear, it all depends on what budget you have, this is something we discuss in more depth in our Re-creating Golden Hour Workshop as well. The end result will vary depending on the wattage of each light source (mainly between using a flash vs. a strobe) but as rule of thumb, you’ll need at least 400ws of power to convincingly recreate sunlight.

Here are 5 simple steps to re-create golden hour after the sun has gone down:

It is highly likely that you’ve photographed during golden hour at least once in your career, which means that you are halfway to understanding how to convincingly create natural sunlight with artificial light sources.

The image on the left is what the light looked like during actual golden hour (around 6:45PM) and the right is artificial light at 7:16PM, about 15 mins after the sun had set. You can see the distinct color difference, our real golden hour being more yellow while the CTO Gel makes the artificial light look more orange. These are some of the questions you should ask yourself prior to attempting this technique:

2. mimic the directionality of light 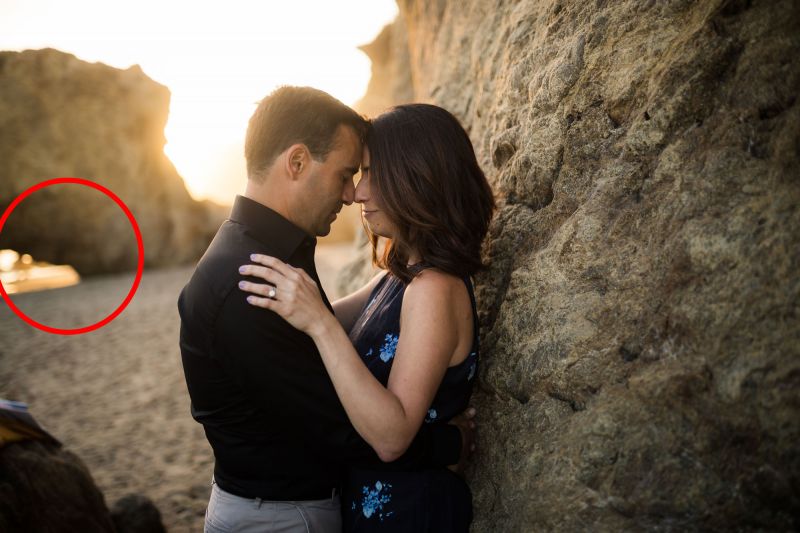 We came across this tiny cave earlier on in the session (6:45PM) and that’s what inspired the idea 20 minutes later. I immediately fell in love with how the light was peaking through and took a mental picture of what the scene looked like. Unfortunately, this beach was packed with engagement, commercial, and recreational shoots and someone had already claimed that spot (they are just out of frame here) when I saw the light peaking through. What we can learn from this image is how the light is angled towards the water, with little spill to the right, this is an important aspect to note for when we recreate this light.

3. How Much Power Will You Need?

The rule “1/1 to overpower the sun” has been engrained in my memory from Lighting 101 for years. I had a small communication issue with my AD200s that caused the flashes to not fire at full power (middle image) but this helps showcase the necessity of having enough light to make it look convincing enough. I think anywhere from 1/2-1/1 power would have been sufficient enough

4. composition is what will convince them

I truly think the key to pulling off the whole “fake golden hour” shot is based on your final composition. 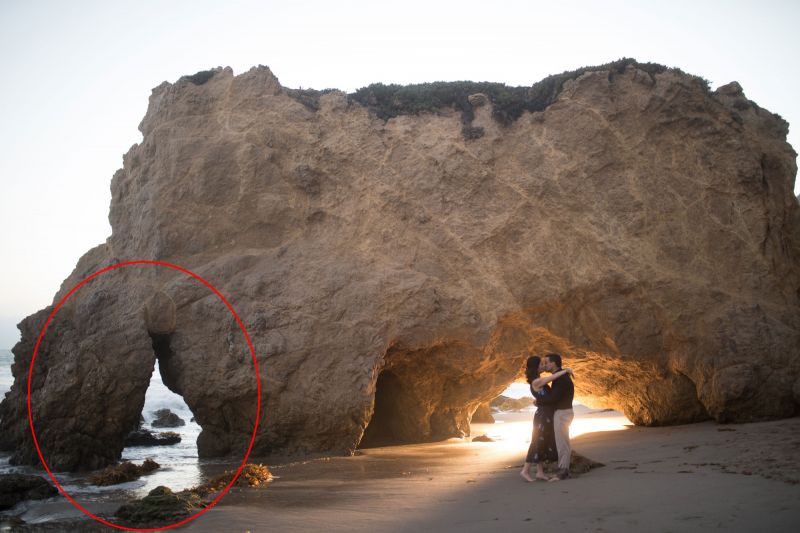 This was my first shot once my light power was adjusted. You can see that we see a large portion of the sky and a lack of light spread on camera left through the other crack in the rock. Any glimpse of what the sky looks like ruins the authenticity of the photo. So instead, I chose to punch in tighter with my composition, while still using the rock/cave to frame the couple.

When trying a flash technique or implementing a dramatic use of flash always take multiple shots to continue telling the story. A common practice I see across the internet with OCF wedding photography is one dramatic shot with flash and … that’s it. Had I had more time I would have tried to get some over the shoulder shots of each of their individual expressions using the same light source so that there was more to the scene than just one image.

5. edit to enhance the color

The final magic touch comes in Lightroom. The shot SOOC needed a bit more punch in contrast and a little more warmth in the highlights/white balance. The SLRL Preset System’s Standard Color Preset does a simple job of keeping the scene similar to how it was shot but also enhances it enough to make the subjects pop from the background. 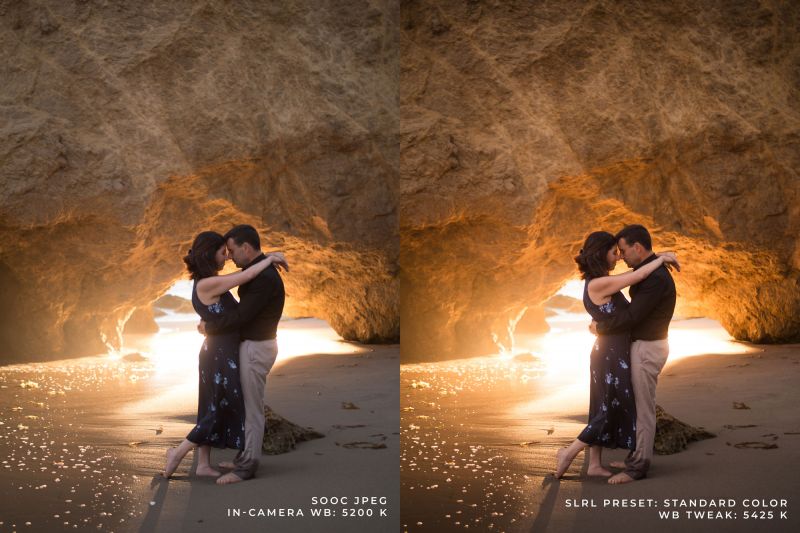 Opportunities like these present themselves when you least expect it so keep an eye out for a good background or scene that lends itself to re-creating golden hour light! For more examples and in-depth tutorials on how to achieve this look check out Re-Creating Golden Hour in SLRL Premium!

Sony Tough SD Cards | Are The Tank of SD Cards Worth It?