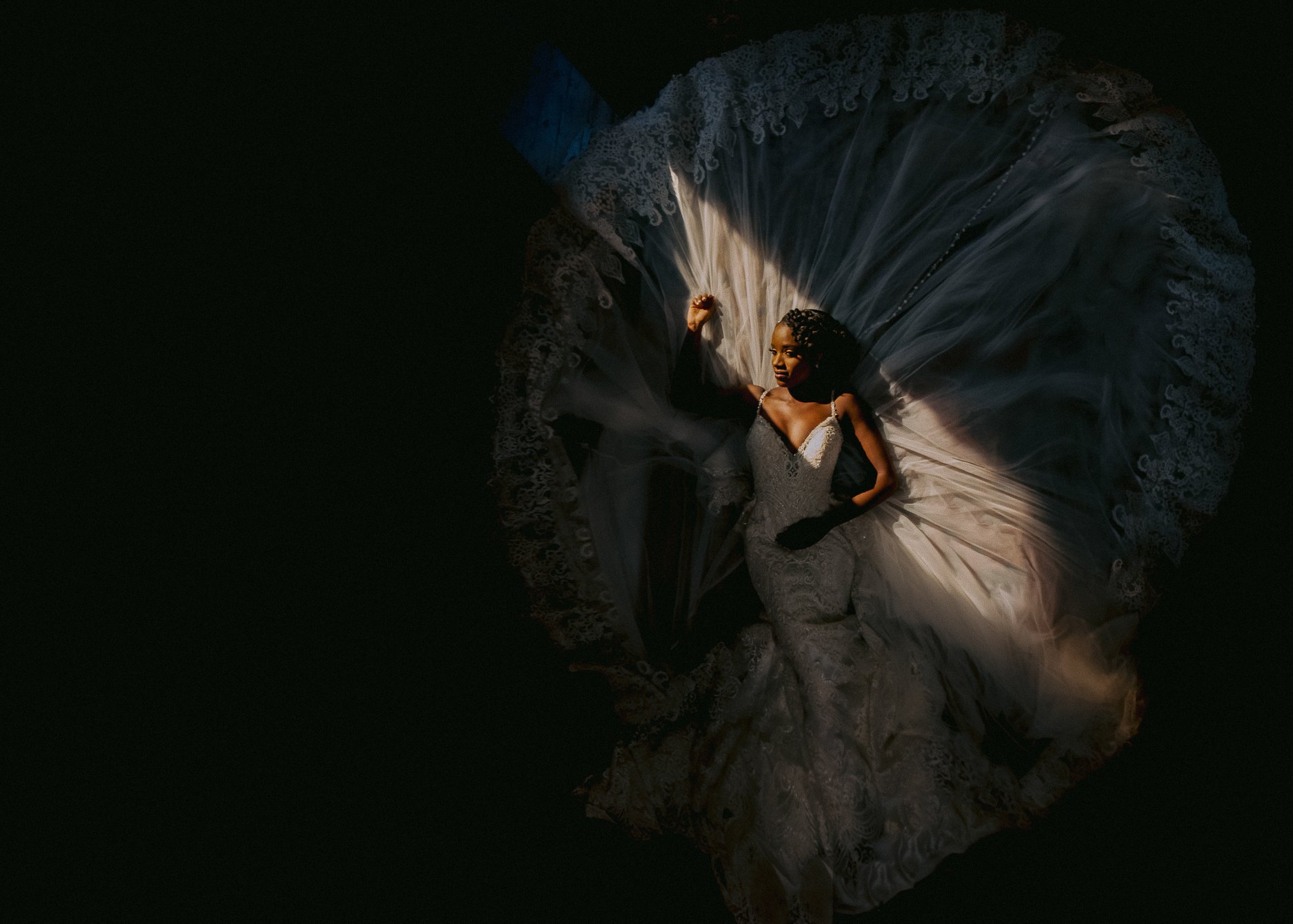 Dramatic looking imagery comes from shadows, and more specifically, having a subject that is significantly brighter than the ambient environment. The attached slide discusses flash versus ambient light exposure, but remember that dramatic imagery can be achieved with natural light as well. As long as the subject is significantly brighter than their environment, you’ll have a dramatic image. This week’s challenge comes from Lighting 1!

See all the chosen features from this week’s challenge below! 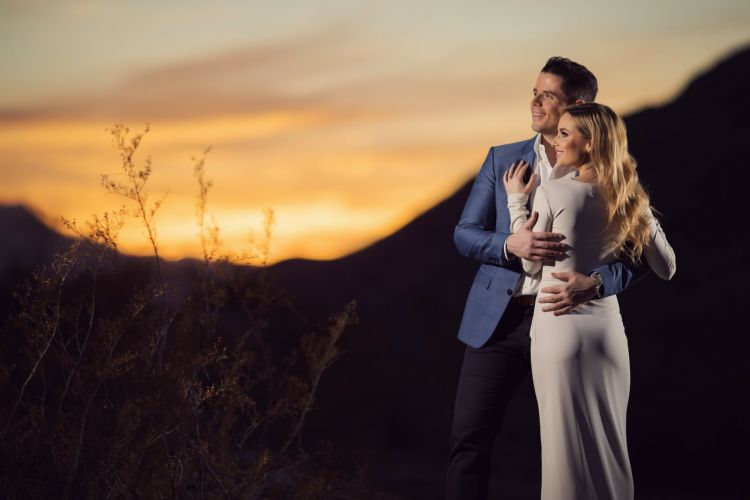 “My set up here is one light camera left just outside of the frame with a Godox AD200 and a MagSphere. On the right side behind the couple pointing towards their backs I had a second AD200 with a MagGrid acting as a rim light to help carve them out. If I could do it over again I would have gotten lower to the ground to keep the mountain line from cutting right through their necks.” 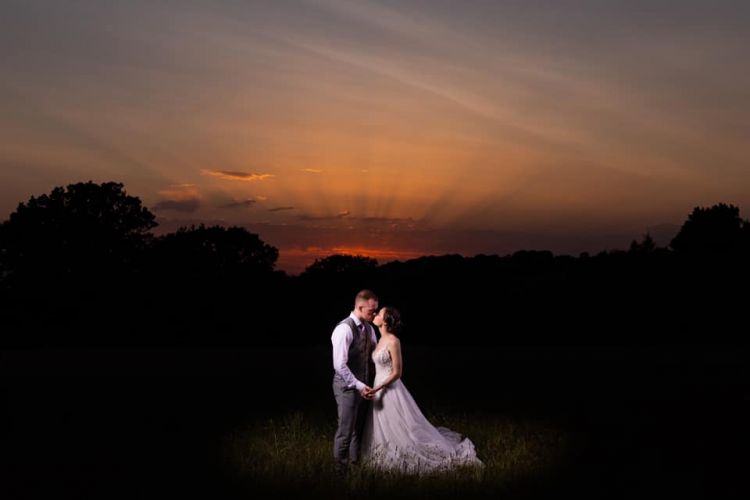 “We lit this shot using two Profoto B1s, one to the left lighting the bride with a 2-foot octa and the other to the right with an umbrella just lifting the shadows on the groom’s face ever so slightly. I then took a photo without the lights in place and composited them in Photoshop.”

“I took this at the first boudoir session I photographed. We were in a very cramped bedroom with a fair amount of window light. I wanted to do something a bit more dramatic, so I closed the curtains (which were thin and didn’t do a whole lot, but cut out a lot of the harsh highlights). I placed two gridded v860ii’s on stands (one on each side) angled down toward my client. I tried various combinations of MagMod products and ultimately ended up with a simple go-to gridded combo! Sony A9 + 35 mm F1.4, 1/200 F1.4 ISO 500, 2 V860ii + MagGrids.” 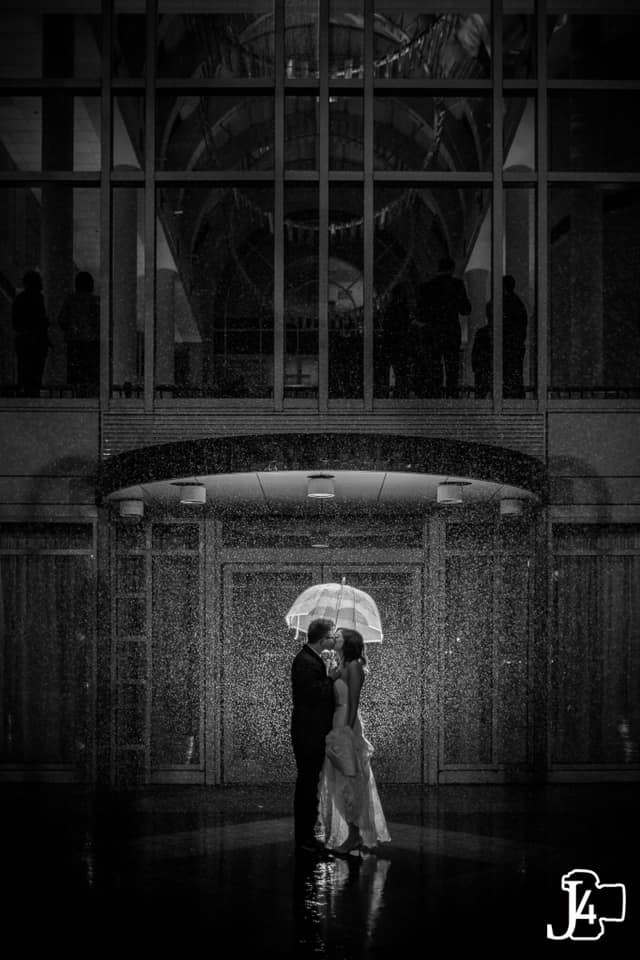 “Rainy day wedding. Placed a speedlite behind the couple. They stood out the venue with their guests on the top floor. 35mm 1.4, flash at 1/4 power.” 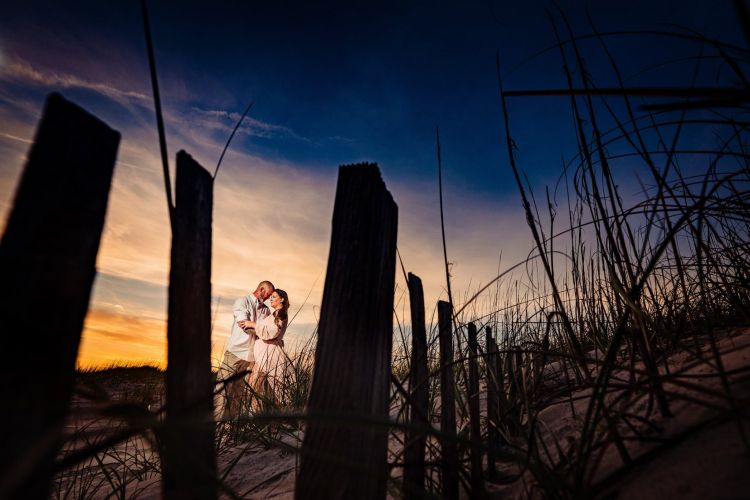 “We love underexposing the ambient to crank out a more dramatic sunset. Adding that extra flash power really makes the subjects pop against the scene. This image was taken shortly after Hurricane Florence on the ravaged Atlantic Beach, NC. I wanted to showcase some of what was still standing and some of what was broken (in this case some of the weeds). Sony A7riii + 16-35mm F2.8, 1/250 F6.3 ISO 100, 1 AD200 + MagMod MagGrid/MagSphere combo.” See this lighting diagram to learn how Chad lit this shot! 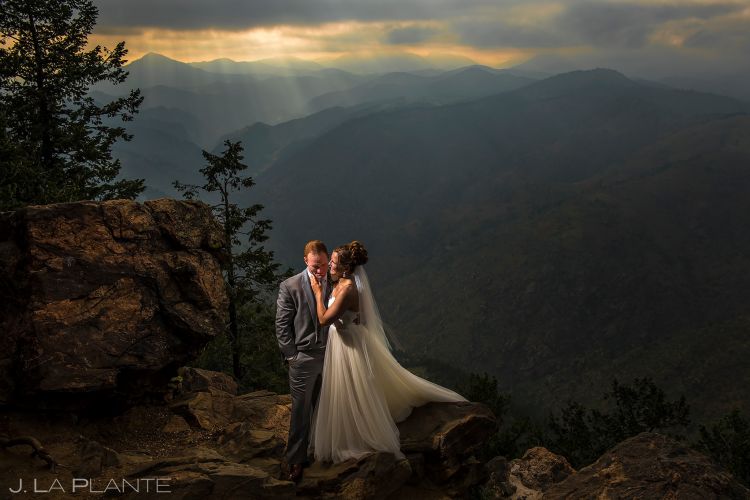 “It was a rare foggy day in Colorado and I knew I had to drastically underexpose the ambient light in order to achieve the look I wanted. I dialed my exposure down to 1/800th, f/5.6, ISO 100, which immediately improved the overall feel of the image and made the sun rays pop. To bring the couple back into the exposure, my assistant lit them with an AD200 outfitted with a MagBeam from approximately 9 o’clock.” See a BTS image from this shoot to see how Jesse lit this shot here! 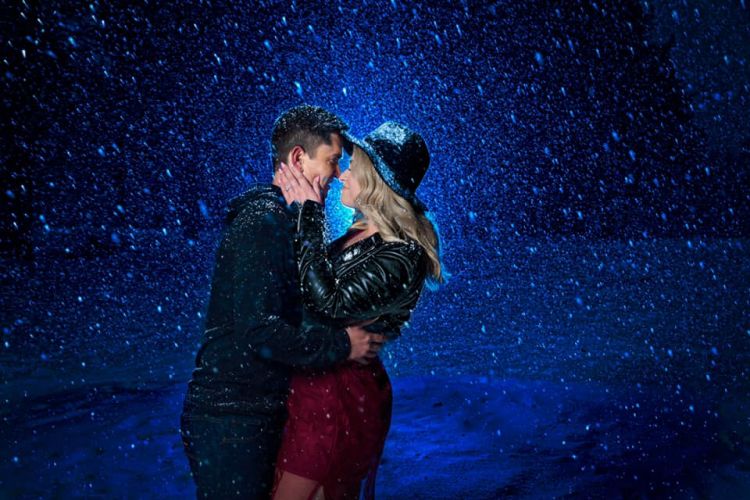 “Unusually snowy especially for Arizona for this engagement session. About 4pm and we underexposed the scene and added in the MagBox + Focus Diffuser camera left with 2-AD200’s and 2-AD200’s in the MagRing + MagMod blue creative gel behind the couple on full power.” 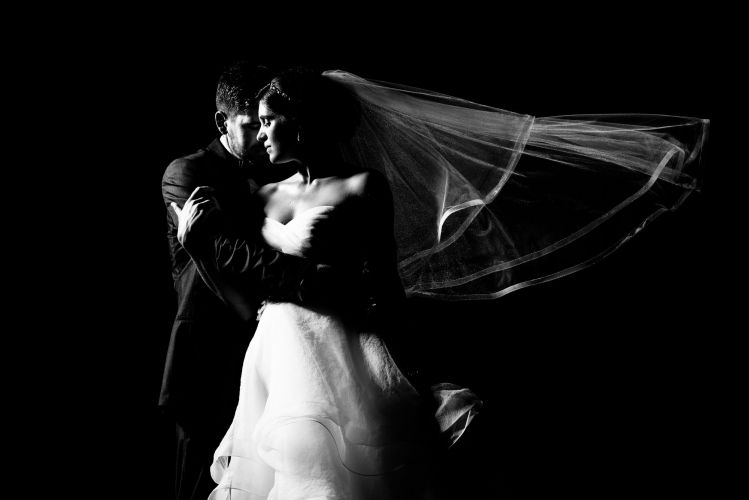 “Light in softbox camera left, flash on the ground aimed up for just a little touch of light camera right. The last shot is the same setup – just a little farther back.” 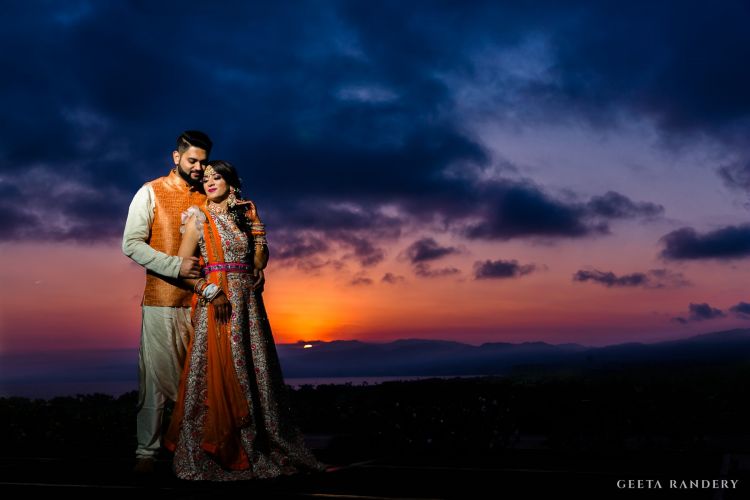 Literally had less than 3 minutes to shoot this! From inside the ballroom, we saw the sun quickly dipping and thought, “aaaah we gotta go NOW!”. We snagged the couple away from mingling and sped past the crowds towards the rooftop helipad… and well, here you have the 4th & final shot before the sun completely set! Gear: Canon 24-70 2.8 III @ 44mm | f/9.5 | 1/200 | ISO 250. Lighting: Single AD200 camera left, with MagSphere, feathered over their faces to allow for some fall-off halfway down their outfits to underexpose/blackout the stage-riser they were standing on. 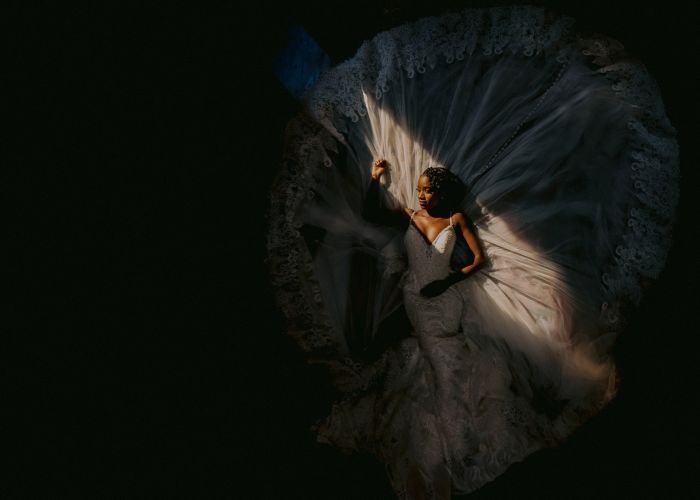 “Patterns, beams and little patches of light cast from windows are one of my favorite sources for interesting and dramatic light. I spied the light and placed the bride so it would highlight and feature them.” 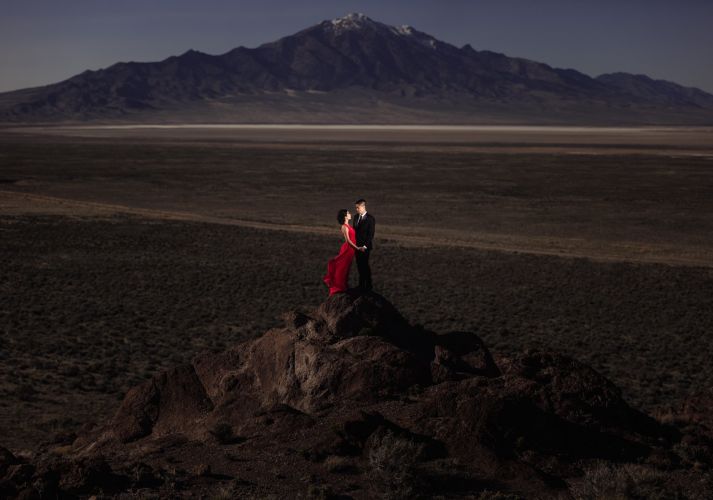 “This is a 10 shot composite stitch. Standing back with a 70-200 zoomed to 200mm to pull the background forward as much as possible. I placed the subjects on the small peek directly under the mountain in the background. I allowed the road to cross through them, hoping it would hold the viewer in place. In-camera exposure was darkened, and I blasted them with a 250ws Profoto B2 with a zoom reflector from about 3 feet away. The images were stitched, and using a plate shot I then removed the light.” 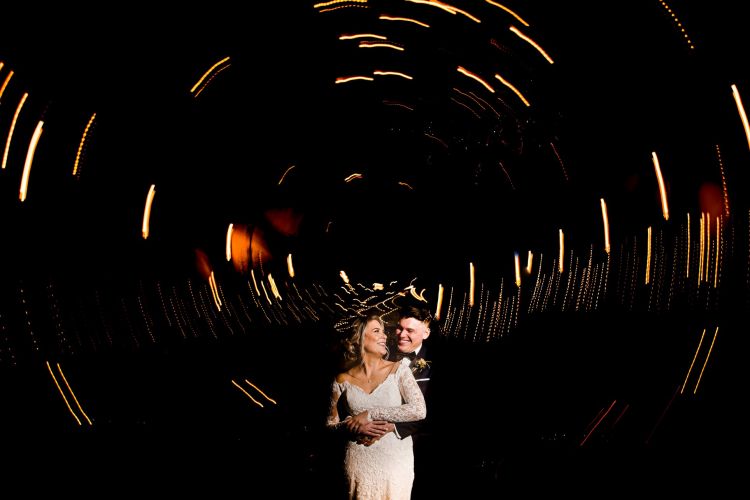 “This was taken in a busy reception space. The room was decorated with string lights everywhere, so I killed the ambient so the only thing that was visible was the lights. I used a slow shutter speed while turning my camera. I used a flash with a MagMod grid to contain the light to just the couple.” 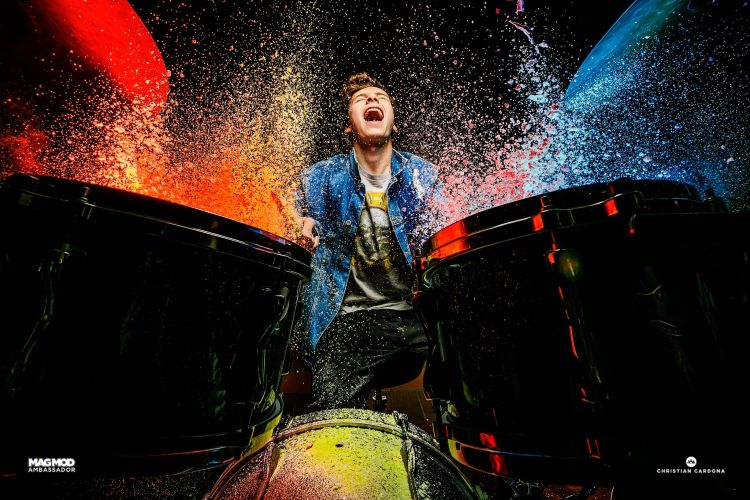 4 Flashes were used to create this shot. You can see the full BTS and setup in this Instagram post to get a better understanding of how Christian created this light. 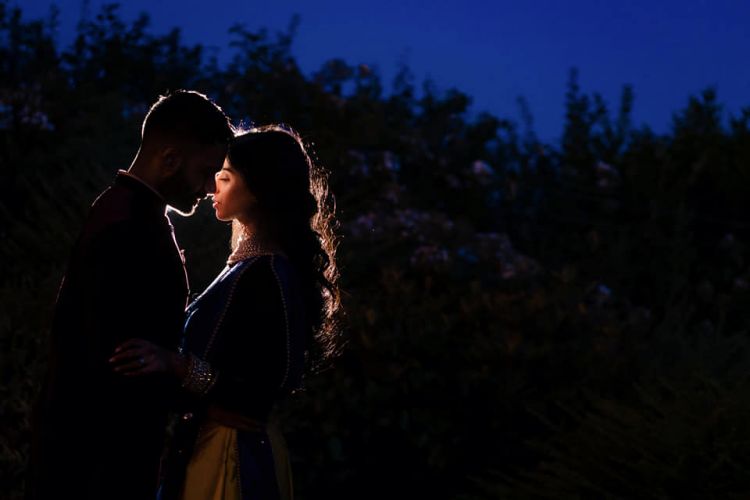 By placing one AD200 behind the couple, Rohit was able to create a wrapping light on the bride’s face. Instead of using this flash as a backlight, you can instead use it as a dramatic pinlight while still maintaining a decent exposure for the background so you don’t lose detail. 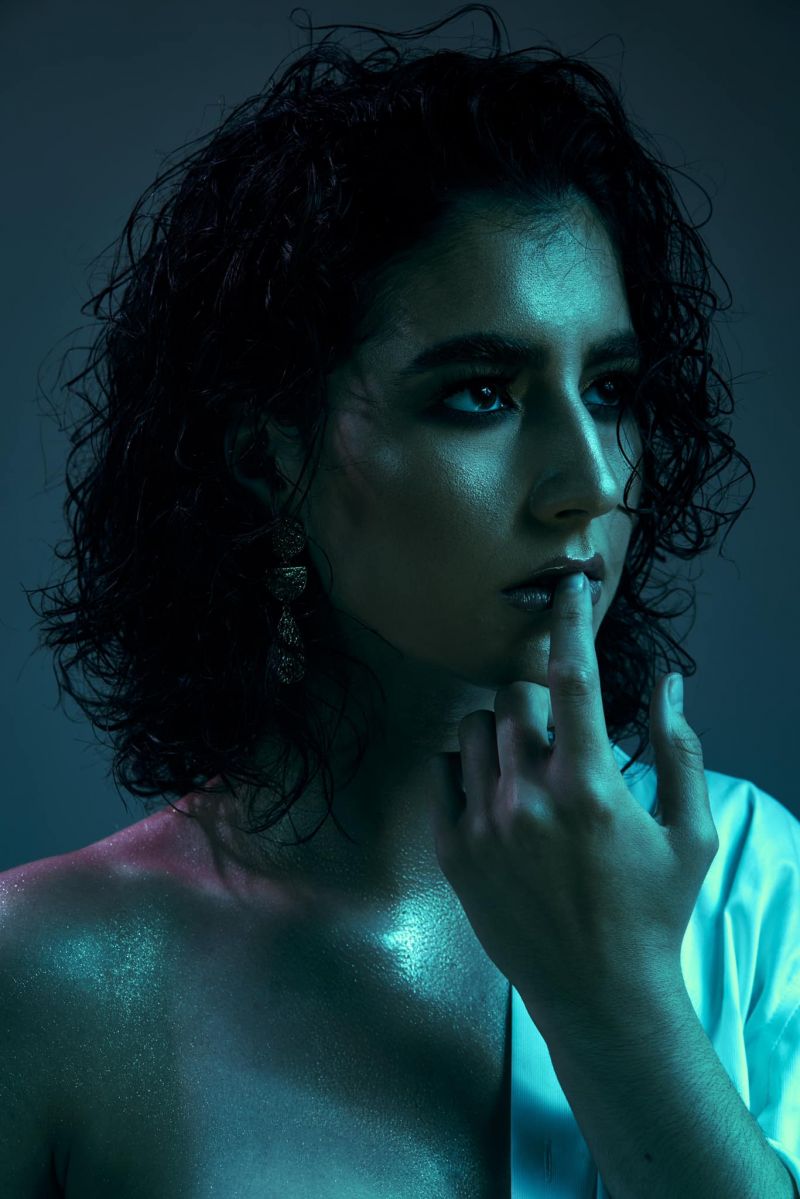 Using colored gels, Josh was able to create this dramatic portraits with his Sony A7Riii and an 85mm lens, two A1x’s and one medium shallow silver umbrella with reflector. You can see the lighting setup in this Instagram post.

Make sure you join the group here in order to get your images featured for our challenge round-up articles!