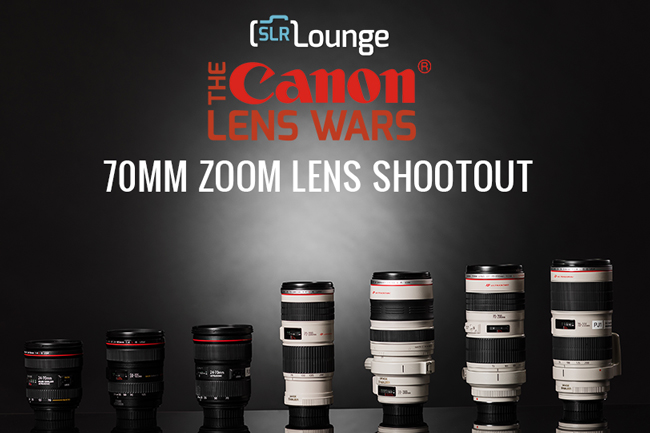 Welcome to the 70mm focal range of the Canon Lens Wars series. We have 7 lenses in this grouping and all of them are zoom lenses, so let’s go over the lenses in our line up and see which is our favorite!

For those that are new to the SLR Lounge Canon Lens Wars series, be sure to check out the teaser video where we introduce the series and our testing methodology as well as all the other videos on each focal length.

Once again, this is a visual test of differences, not a technical test. So, we are trying to distinguish differences in appearance while viewing images full screen on a Dell U2713HM 27″ IPS monitor.

Now, usually we would talk about sharpness and then talk about the overall aesthetic quality to the different lenses, but this time we are going to approach it a little differently. Mainly because of the fact that most of these images look virtually identical when simply viewed full screen.

At Wide Open Apertures (WOA), all of these lenses are quite solid in this line up and are very similar in overall looks. Even when comparing all the lenses at their WOAs (some at f/2.8, most at f/4 and one even at f/5.0) they were quite similar aesthetically.

That being said, there were some favorites when simply flipping between images. For example, the Canon 24-70mm f/2.8 Mark II seemed to stand out a bit overall. It appeared crisper and sharper, and also had slightly more bokeh than the others.

Another favorite was the Canon 70-200mm f/2.8 Mark II because of its impeccable sharpness and excellent bokeh creation.

When it comes to the maximum amount of bokalicious bokeh in this pack, the Canon 70-200mm f/2.8 Mark II and the standard 70-200mm f/2.8 without IS lead the way. Both lenses have the most and best aesthetic quality to the bokeh, which can be be seen when comparing the area to the left of the model between each photo. 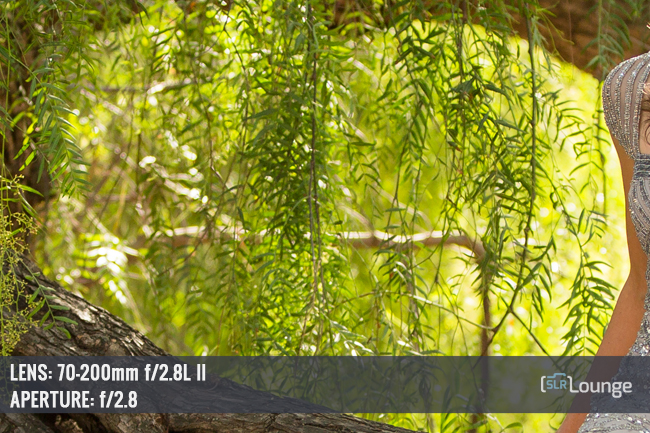 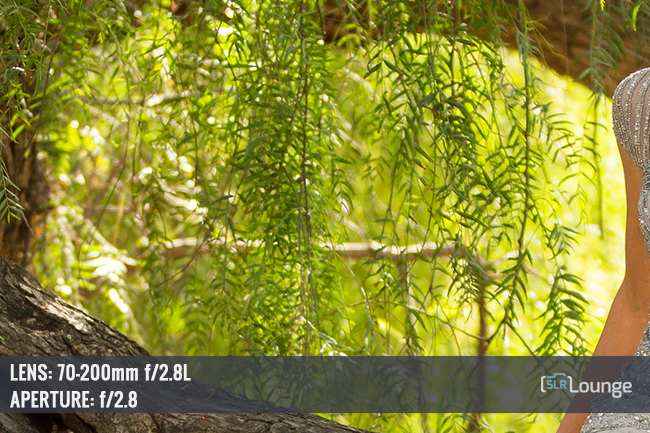 In a very close 3rd place we have the Canon 24-70 f/2.8mm Mark II, the lens which has been a long running favorite in the series. One of the reasons that the 24-70 and the previous 70-200s have the best bokeh is because they are the only lenses in the group that go to f/2.8. 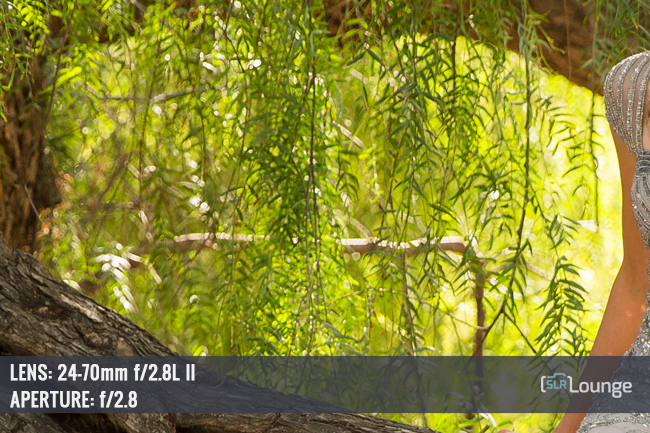 Trailing right behind these lenses is the Canon 70-200mm f/4L IS. Of all of the non-f/2.8 lens, this lens renders the most bokeh. 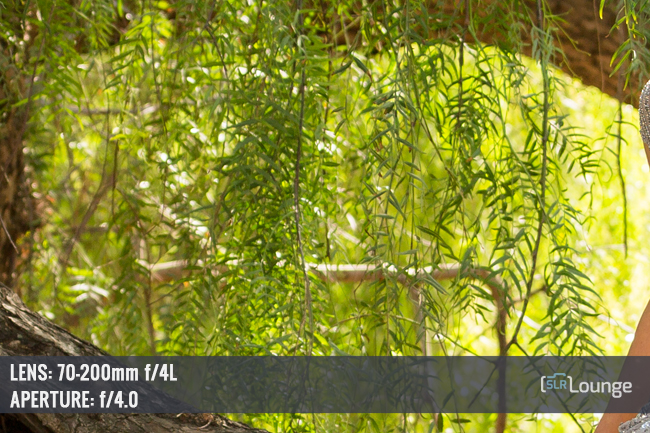 Between the last 3 lenses left, the looks are fairly similar. I would probably say in 5th place is the Canon 24-105mm f/4. That’s right, in regards to bokeh performance at 70mm, the usually-underperforming 24-105 is not last place. 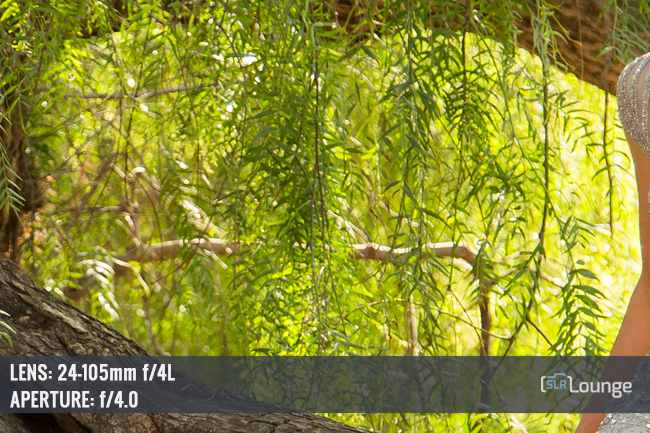 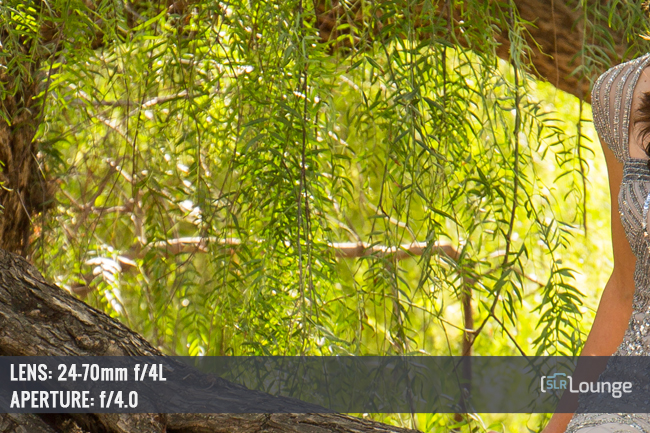 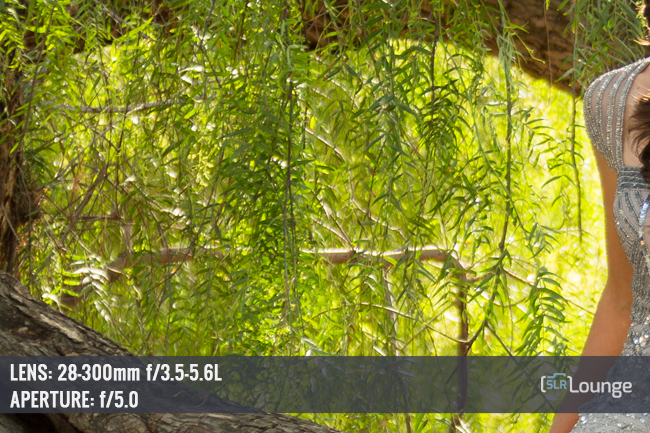 Most of these lenses are pretty solid in terms of sharpness and look pretty similar when viewed full screen. There are some at the lower end of the pack and a few that are ahead of the pack. So if I had to choose one for overall sharpness and clarity when wide open, I would choose the 70-200 f/2.8L IS Mark II. 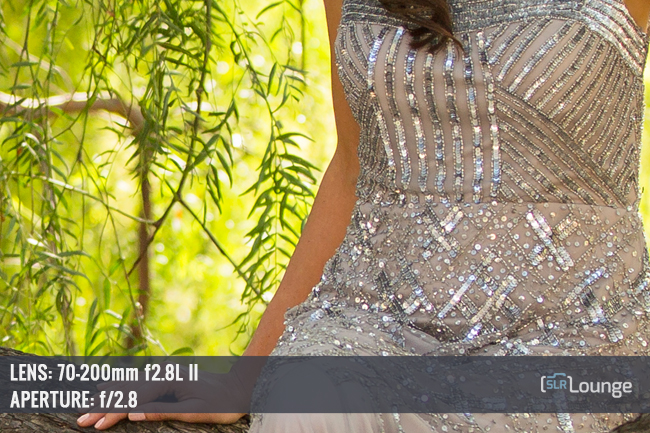 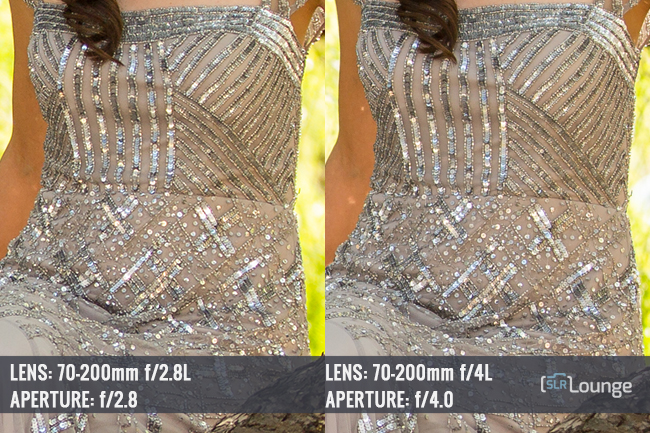 The Canon Lens with Average Sharpness 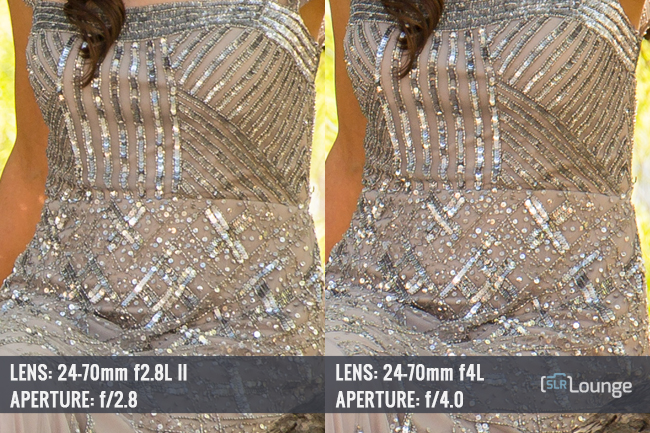 The Canon Worst Lens for Sharpness 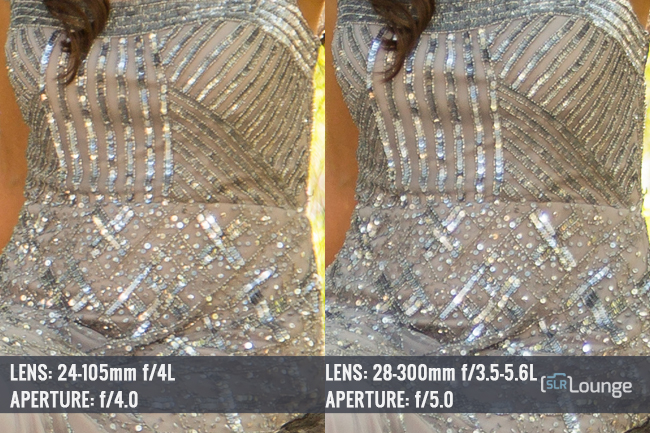 Finally, for overall contrast and color at wide open aperture, all the zoom lenses performed quite well. The only exception is the Canon 28-300mm f/3.5-5.6L, which appeared to be ever so slightly less contrasty than the other lenses. But still, all were solid performers. 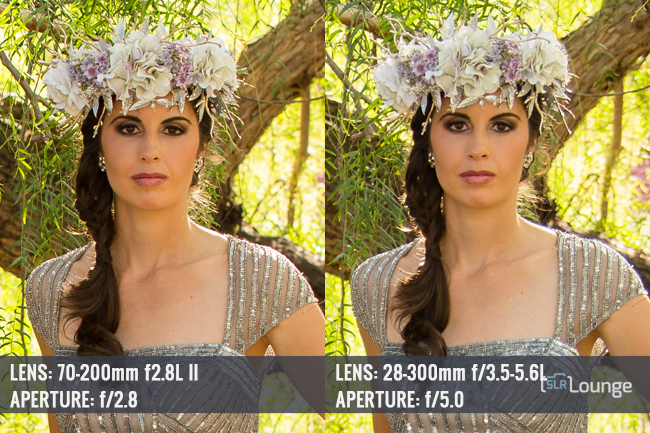 So let’s flip them all up to their Widest Common Aperture (WCA) of f/5.6 and see which lenses are sharpest from edge-to-edge. Once again, they are all solid, but the 70-200s appear to step ahead a bit in terms of edge-to-edge sharpness. In particular, the two best were the 70-200 Mark II and the standard 70-200 without IS. 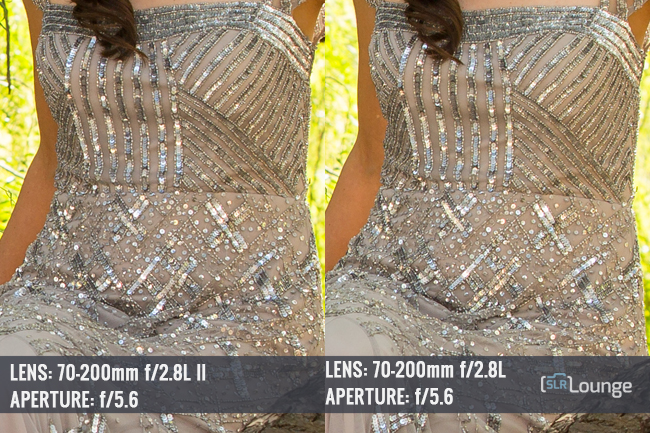 The rest of the lenses pretty much evened out in terms of sharpness. The two worst-performing lenses at wide open aperture, the 24-105 f/4 and the Canon 28-300mm f/3.5-5.6L, still look noticeably softer when compared to the leaders of the pack, however. 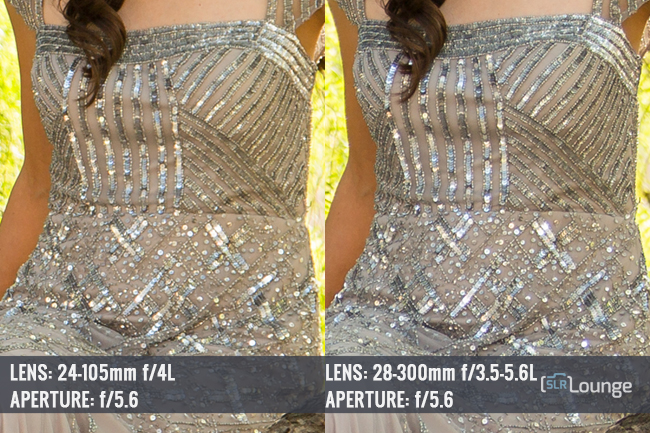 Now when it came to barrel distortion, the wide angle zoom lenses did display a tiny bit more barrel distortion at 70mm than the telephoto length lenses. But, the difference is extremely tough to differentiate at 70mm without using an overlay.

So out of these 7 Canon zoom lenses, which lenses stand out?

The Best Telephoto and My All Out Favorite

For pure bokeh and image aesthetics, my favorite lens in the pack and the second lens I would wholeheartedly recommend is the Canon 70-200 f/2.8L IS II. Like the 24-70 2.8 II, this new take on a classic lens simply outperforms most telephoto lenses in its class. The only reason I say this is the “second lens” you should own, is simply because the 24-70 is a little bit more practical in terms of the focal length.

Again, at around $2,499, this isn’t necessarily a cheap lens, but once again it is a “best in its class” type lens and the money you are investing is reflected in the overall functionality and image quality.

The Best Standard Zoom Lens and My Second Favorite Lens

The superb Canon 24-70mm f/2.8L II is my second favorite lens in this line up. In fact, it probably is in the top 3 favorites of all the lenses I own. Once again, we have seen this lens outperform most zooms and lenses at every focal length. For most of you, this is the first lens you will want to invest in simply because it has an extremely practical focal range.

Given the fact that it is so versatile in going from a wide angle lens to a semi-tight zoom lens, it is really a great bargain for what you get despite the fact that it costs $2,299. If I were restricted to shooting with only 2 lenses, it would be this one, the Canon 24-70mm f/2.8L II and the Canon 70-200 f/2.8L IS II.

The Standard Zooms We Would Avoid

is so good, I highly suggest to save your money and skip over the Canon 24-105mm f/4L and the Canon 24-70mm f/4L unless you simply need the image stabilization for say DSLR video.

We talked about the Canon 28-300mm f/3.5-5.6L before, and while it does offer a ton of flexibility in its focal range, it also provides sort of middle of the road “good” results at every focal length. What it does truly well, is simply offer good results over a huge 28-300mm focal range.

So, again for best overall quality, I wouldn’t necessarily recommend this lens, unless you just need the absolute most convenient 1-lens setup that can do virtually anything with its massive focal range.

The Telephoto Lens I Would Avoid

Personally, I would again skip over the f/4 version of the 70-200mm zoom lens. At telephoto focal lengths, the additional stop at f/2.8 is really crucial in low light situations to get extra speed on your shutter speed. But, the Canon 70-200mm f/4L IS does have image stabilization and it costs $1,349 which makes it a good telephoto lens for DSLR video. But, I just love the creamy f/2.8 bokeh-de-beppo in a telephoto lens too much to go with this f/4 version.

So, to wrap it up, my two favorite lenses based on the overall aesthetic quality of the bokeh, image sharpness, quality and so forth would be the Canon 24-70mm f/2.8L II and the Canon 70-200mm f/2.8L IS II.

We're Going to Be In the Bahamas and You're Invited!