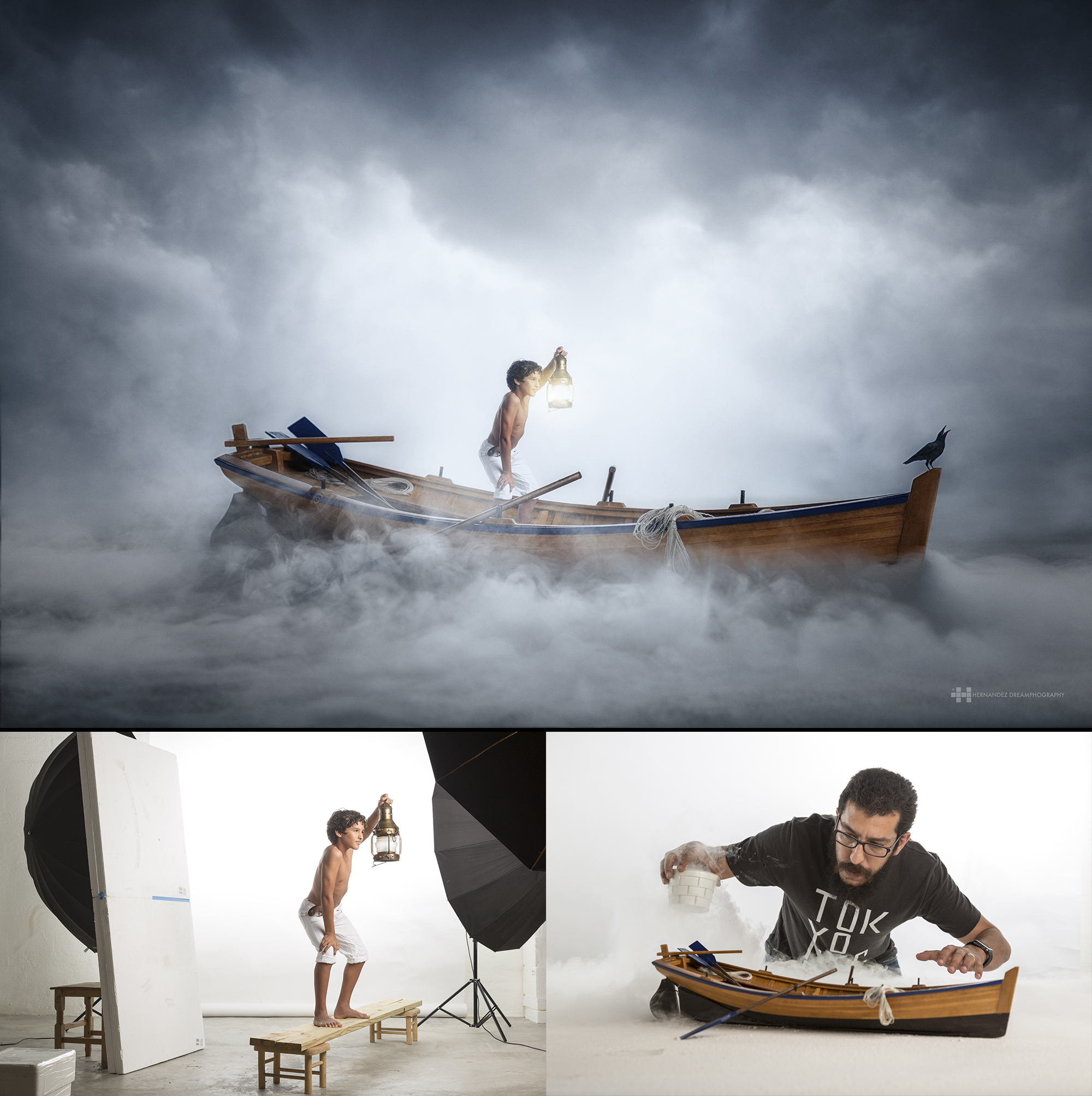 I was an only child for eight glorious years until my baby brother came and messed it all up. That meant I was adept at using my imagination and playing by myself. I would spend hours playing with my stuffed animals, creating make-believe worlds for them and going on adventures with them. I eventually grew out of my toys and got rid of them, but some days I long to hide in my room with my Sesame Street playhouse or the doll my Dad bought me for my 7th birthday.

Graphic designer, commercial photographer, and digital artist Felix Hernandez has a similar childhood story, but now, as an adult, he uses his camera and the digital wonders of Photoshop to bring to life the scenes he’d always imagined in his head when playing with his toys. 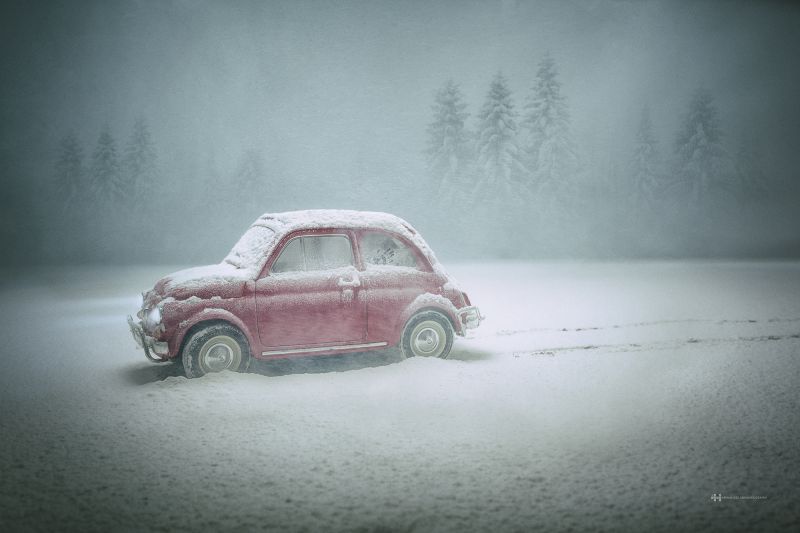 In all of Felix’s images, he creates as much of a scene in camera as possible as opposed to in Photoshop. By recreating the scene in real life, he says it makes the image look more realistic, and there’s also the added element of fun. For example, in the behind the scenes video below which shows a toy car driving in the snow, Felix used wheat flour, corn syrup, and smoke from a cigarette to create fog.  You can see how he does it here:

Aside from setting the scene, there are three areas he focuses on to create his realistic toy photography: Scale, Light, and Post Production.

When it comes to toy photography, scale is extremely important to give the image a sense of “realism,” and so Felix recommends to get close with your camera. You’d think that a macro lens would be the ideal tool for toy photography, but that’s not the case according to Felix, as the depth of field will be a clue to your brain that the scene isn’t quite “real.” If you were to use a macro lens, Felix says, keep everything in focus on all the planes by using focus stacking. Felix gives a few tips on scale and focus stacking: 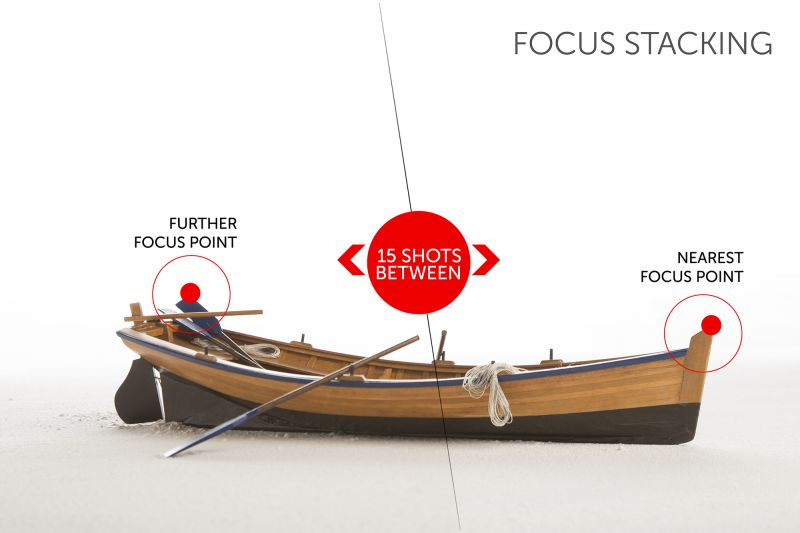 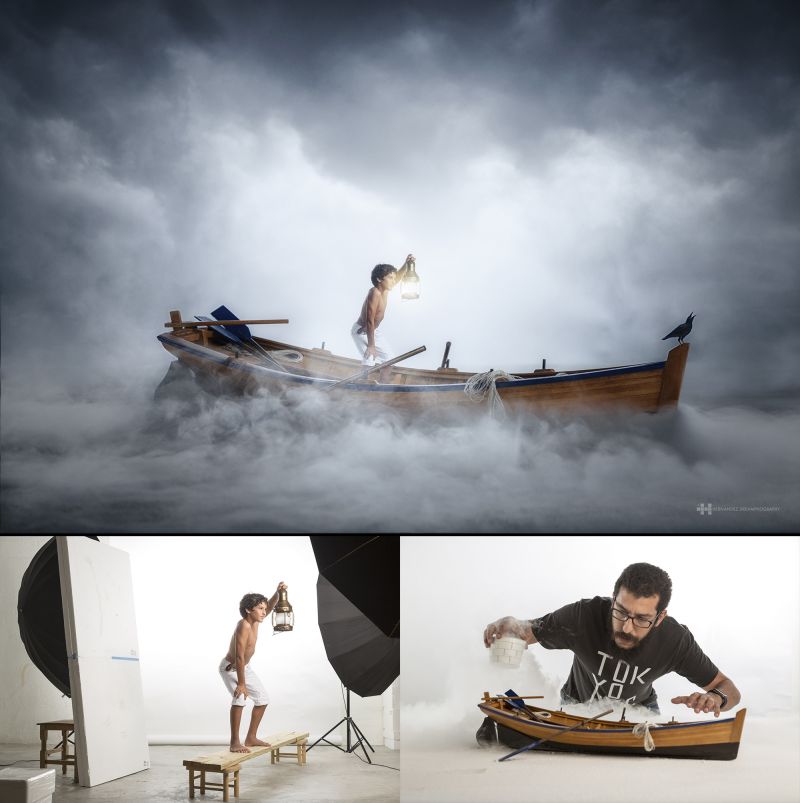 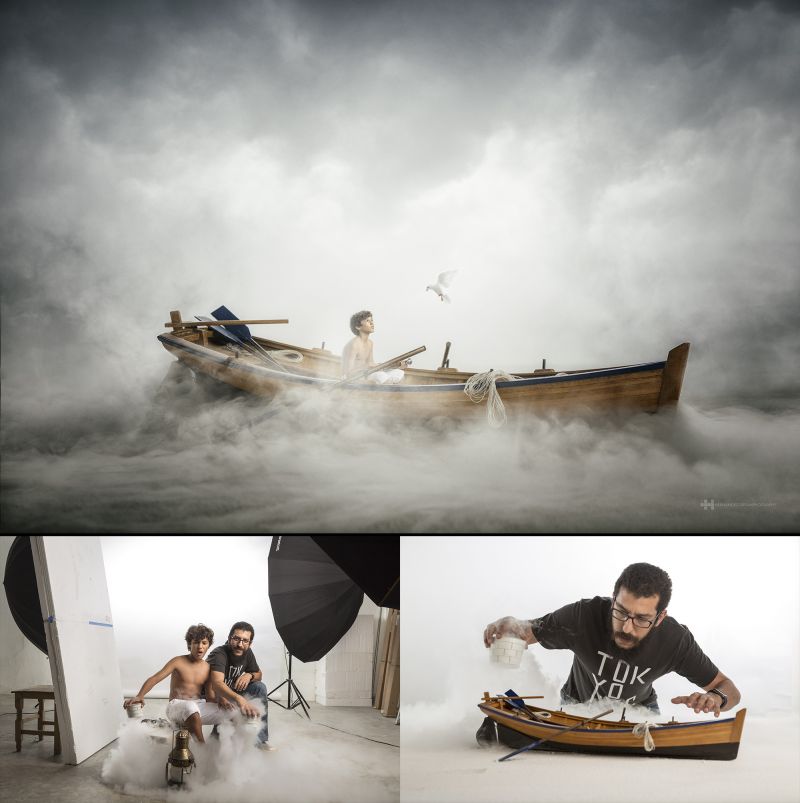 [REWIND: FOCUS STACKING | WHAT IT IS & WHY PHOTOGRAPHERS OF ALL TYPES SHOULD KNOW HOW IT’S DONE]

If you watched the video, you’ll notice that Felix uses quite a few studio lights. To give it the sense of realism, Felix again thinks “in the scale.”

“It’s not the same shooting a real human model with an Octabox as shooting a ‘scaled model’ with the same Octabox. The quality of the light would be softer due is a huge modifier for a scaled model. So all the basics of lighting in studio will apply but take them to a smaller scale.”

Felix typically shoots with a beauty dish and a snoot plus two or more lights in the background if his scene is pure white, like this one below: 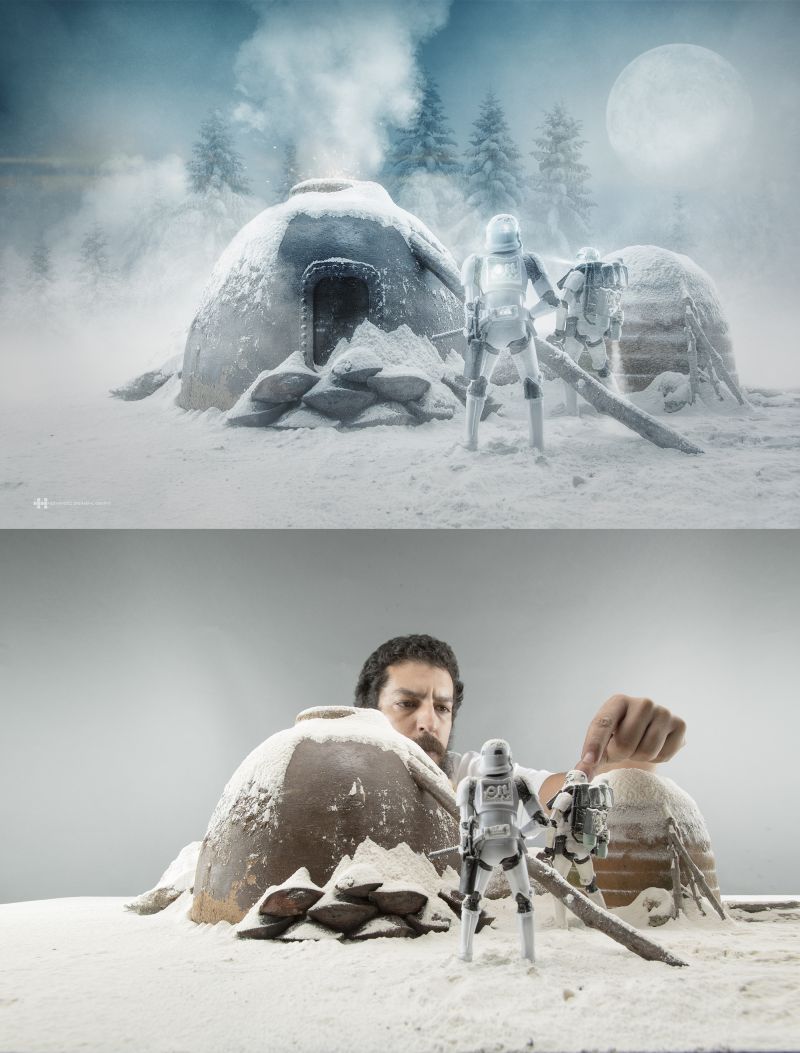 In Post, Felix will finish his scene by placing a backdrop or other elements that “complement” his story; the things that would be too complex to recreate in camera such as “adding a sense of motion, color grading for adding the ‘mood,’ etc…”

Below are some of Felix’s final images and a behind the scenes peek at how he created them. For Felix, toy photography is just a mixture of play and technical photography.

“The technical side can be learned and it’s ‘easy’ but the ‘hardest’ part of toy photography lies in our minds and in our hearts, and that is staying childish, foolish, dreamy.” 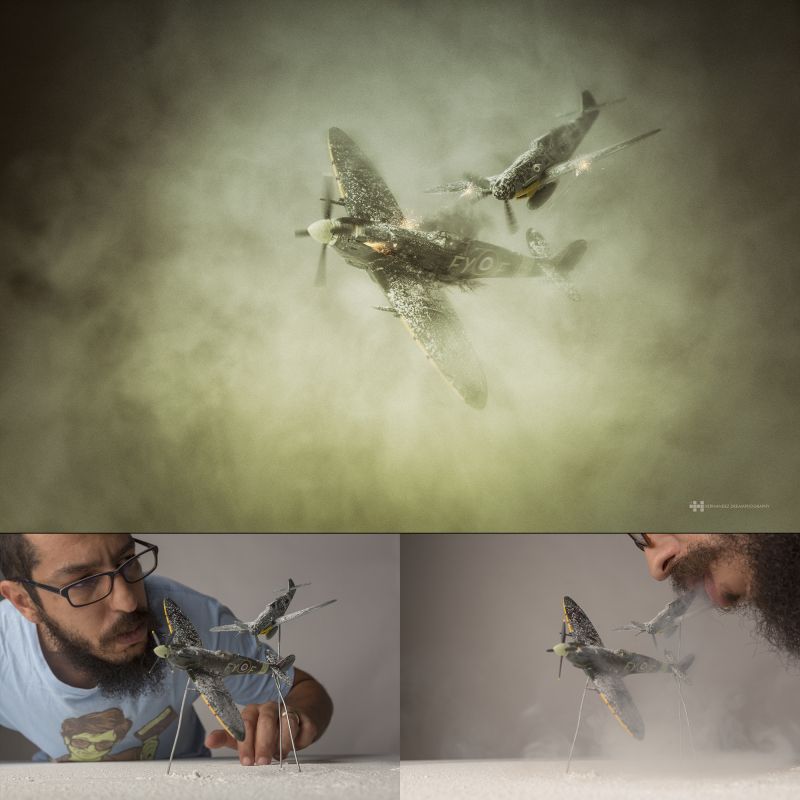 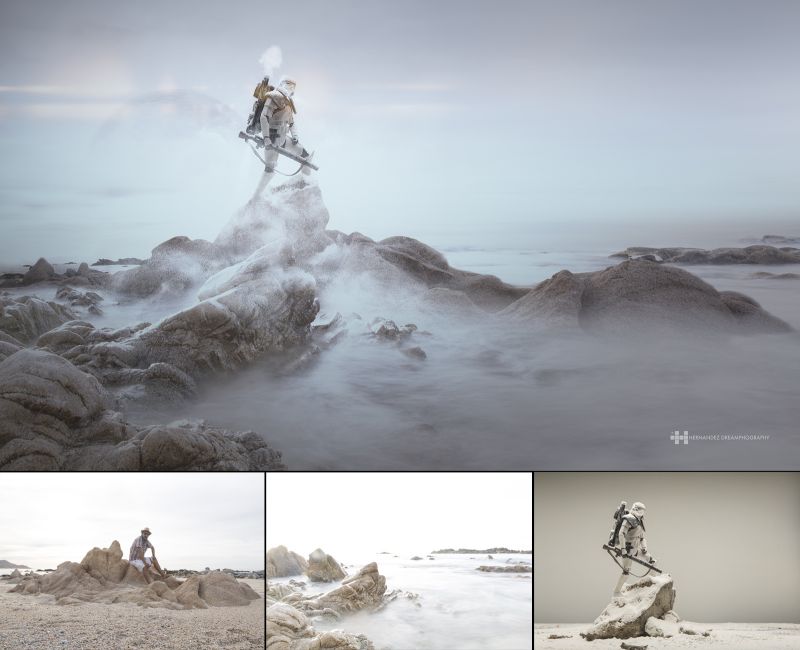 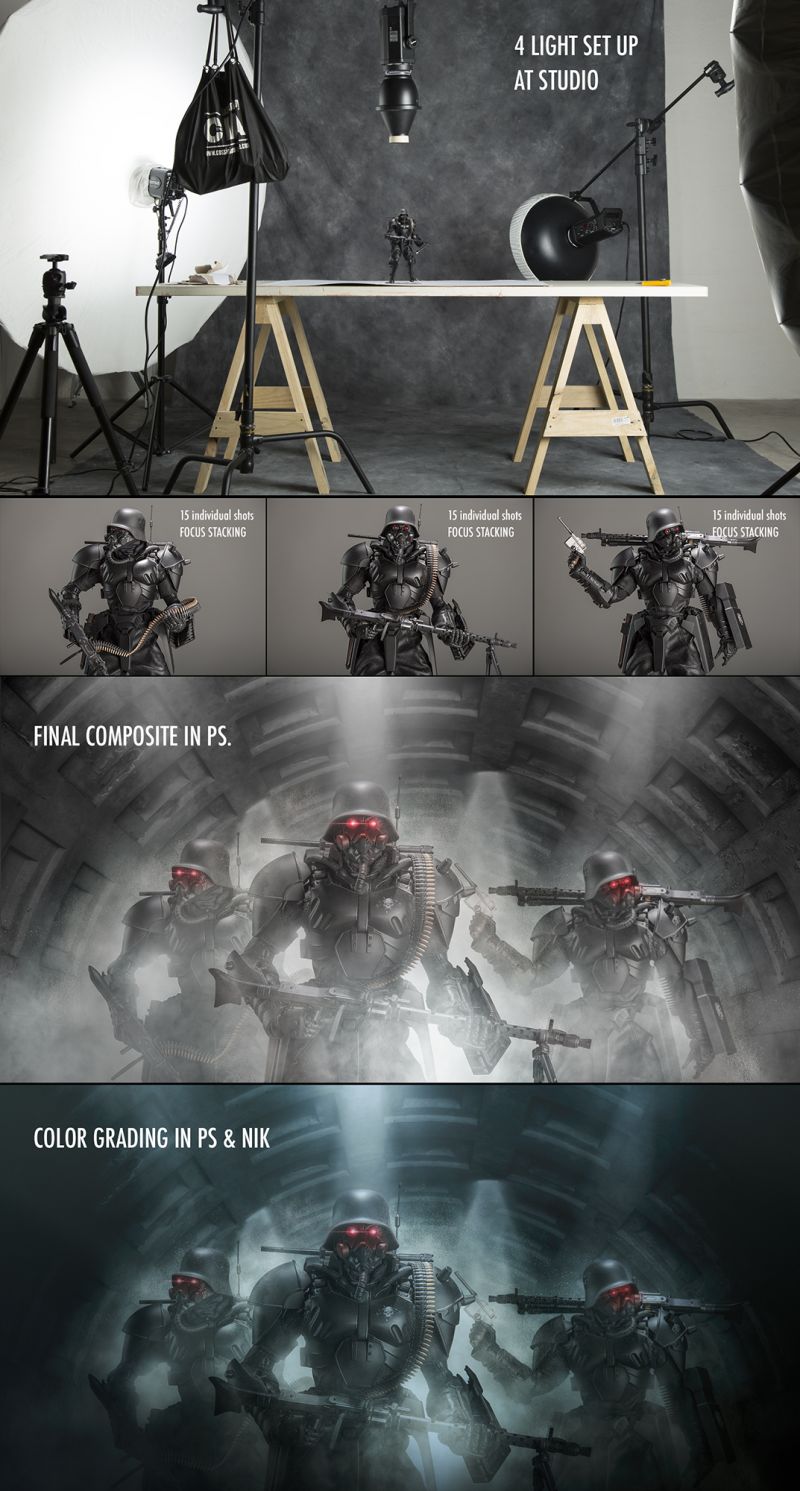 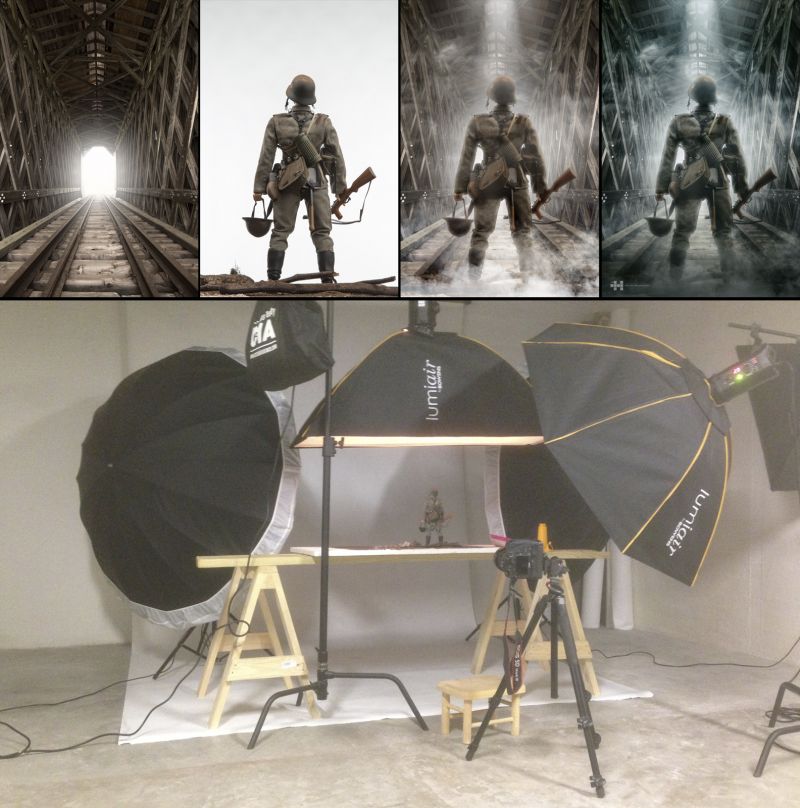 CREDITS: Photographs by Felix Hernandez are copyrighted and have been used with permission for SLR Lounge. Do not copy, modify or re-post this article or images without express permission from SLR Lounge and the artist.
Tags #Behind the Scenes #Focus Stacking #toy photography
Previous

New iPad Pro | With Astropad & Camranger, Is It The New Must-Have Tool?