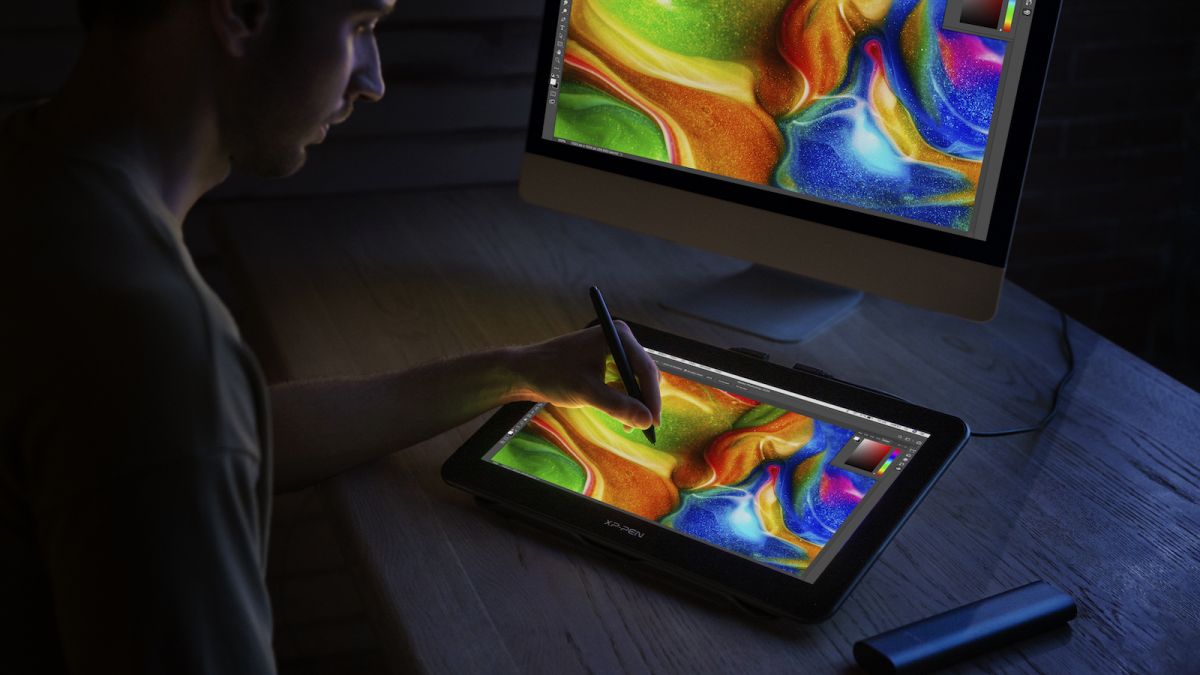 Reasonably priced, the Artist Pro 16TP from XP-Pen packs enough punch to compete with much more expensive offerings on the market. It’s a quality tablet for artists and photographers, with lots of extra goodies to boot.

XP-Pen was founded in Japan in 2005 as a professional developer of graphics tablets, pen display monitors, stylus pens, and other tools aimed at visual content creators.

XP-Pen is one of the leading names in graphic tablets, and their most recent release, the Artist Pro 16TP, appears to continue their reputation of quality artist technology. This addition to the XP Pen family comes loaded with an impressive display, a true-to-life color range, with a new stylus that promises to convert non-digital artmakers.

With the XP-Pen Artist Pro 16TP, the maker partnered with famed artist Shan Jiang for a campaign, whose tagline is “Dream. Brave. True.”

What’s in the Box? 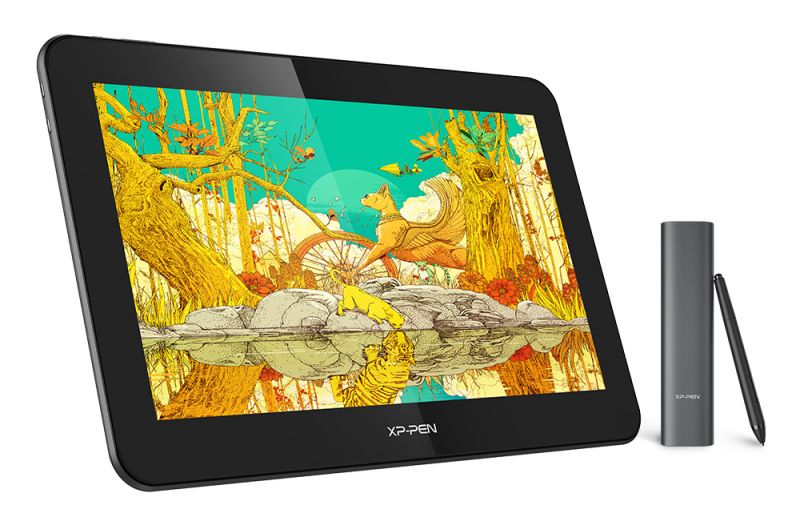 The XP-Pen Artist Pro 16TP is a slick, mid-sized touchscreen that looks a lot like a tablet computer. It measures 16 inches wide, 10.4 inches high, and a mere 0.6 inches thick. This slim profile makes it easy to transport wherever you take your laptop. It can slip right in alongside your computer and go around in your laptop bag. The bulk of the front consists of the screen itself, which has an area of 13.6 inches wide and 7.6 inches high. This works out to a diagonal measurement of 16 inches, which is where the 16TP gets its name.

One thing you don’t get is physical control buttons. If that’s what you want, take a look at the XP-Pen Innovator 16. It has programmable knobs and buttons that you can use to interface with your art software. That said, the buttons occupy space, so the overall size is significantly larger. But what if you need more real estate? For a larger screen, check out the XP-Pen Artist 24 Pro.

It is a brilliant screen that boasts a 4K resolution of 3840×2160. The color range represents 92% RGB, 124% sRGB in color gamut, and 1000:1 color contrast ratio. Equivalent devices with this specification by other manufacturers could cost you much more money than this device. The Artist Pro 16TP’s screen is made with an IPS panel, with a viewing angle of 178 degrees. This means you can look at the screen from just about any angle, and still see true colors.

The screen is fully laminated, which means the outer glass has been applied directly to the screen material. On many screens, there’s an air gap in between. This “partially laminated” design is cheaper to manufacture, but it’s not ideal for artists. The air gap introduces a difference between where you touch the screen and where the touch is detected. It’s subtle, but it can wreak havoc when you’re trying to work on fine details. With a fully laminated screen, you don’t have that problem. The screen detects your touch exactly where you want it to.

This is how many times per second the sensors will report back to the processor. The higher the rate, the smoother the overall drawing experience. This tablet has a report rate of 220 reports per second, which is fairly high. This allows you to work very quickly without your touchscreen failing to keep up.

This touchscreen has a fairly wide bezel, a little bit more than an inch on the sides and top. At the bottom, it’s nearly two inches thick, with an XP-Pen logo stamped in the middle. The bezel is black and smooth and seems to be designed to spread out the internal components. This is what enables XP-Pen to produce a quality touchscreen that’s this thin. 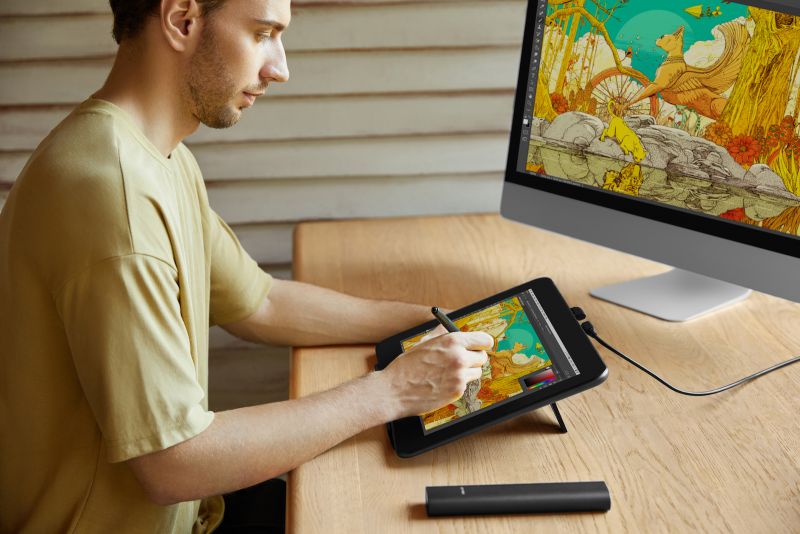 The graphic tablet comes with a battery-free stylus with 8,192 levels of pressure sensitivity and up to 60 degrees of tilt control. This makes illustrating content extremely convenient and time-efficient with fewer errors. The stylus comes with an eraser (sensor) at the end which offers the seamless functionality of erasing an error without having to do it manually in the display.

This pen case looks and feels premium with its metallic exterior housing. Build quality is excellent. It is robust and clean. The stylus comes with nine nibs of assorted sizes.

The Artist Pro 16TP connects via USB Type-C by default. In this configuration, you would use one USB Type-C port for power, and the other to connect to your computer. But what if your computer doesn’t support USB Type-C video output? In that case, you’d need to switch over to the 2-in-1 cable. This will allow you to plug into the HDMI port. In terms of device compatibility, this screen works with just about anything. It’s compatible with Windows, macOS, iOS, Android, and ChromeOS.

The XP-Pen Artist Pro 16TP looks good, has a solid build quality and fantastic specifications for a display. The 4K resolution makes everything look sharp and color accuracy is good. The touchscreen allows you to use finger gestures conveniently. The downside is the pen is not as sensitive when it comes to detecting small pressure changes, and hence drawing performance is affected. This means when drawing, you can expect thicker lines when using minimal pressure. The line variation from thin to thick is not as big compared to a more sensitive pen. Also, it is quite strange that it lacks a built-in stand, so this should be an extra investment.

Color accuracy is quite good, so it can be used for design work and digital art. This pen display is best used with Windows OS, and not so much for macOS users due to the lack of finger gesture support on macOS and drawing apps running on this system. The Artist Pro 16TP is a culmination from XP-Pen of the amazing quality of the digital art tools they have been producing for the last few years. Overall, this is a highly-recommended tool that will make your workflow smoother and more enjoyable.