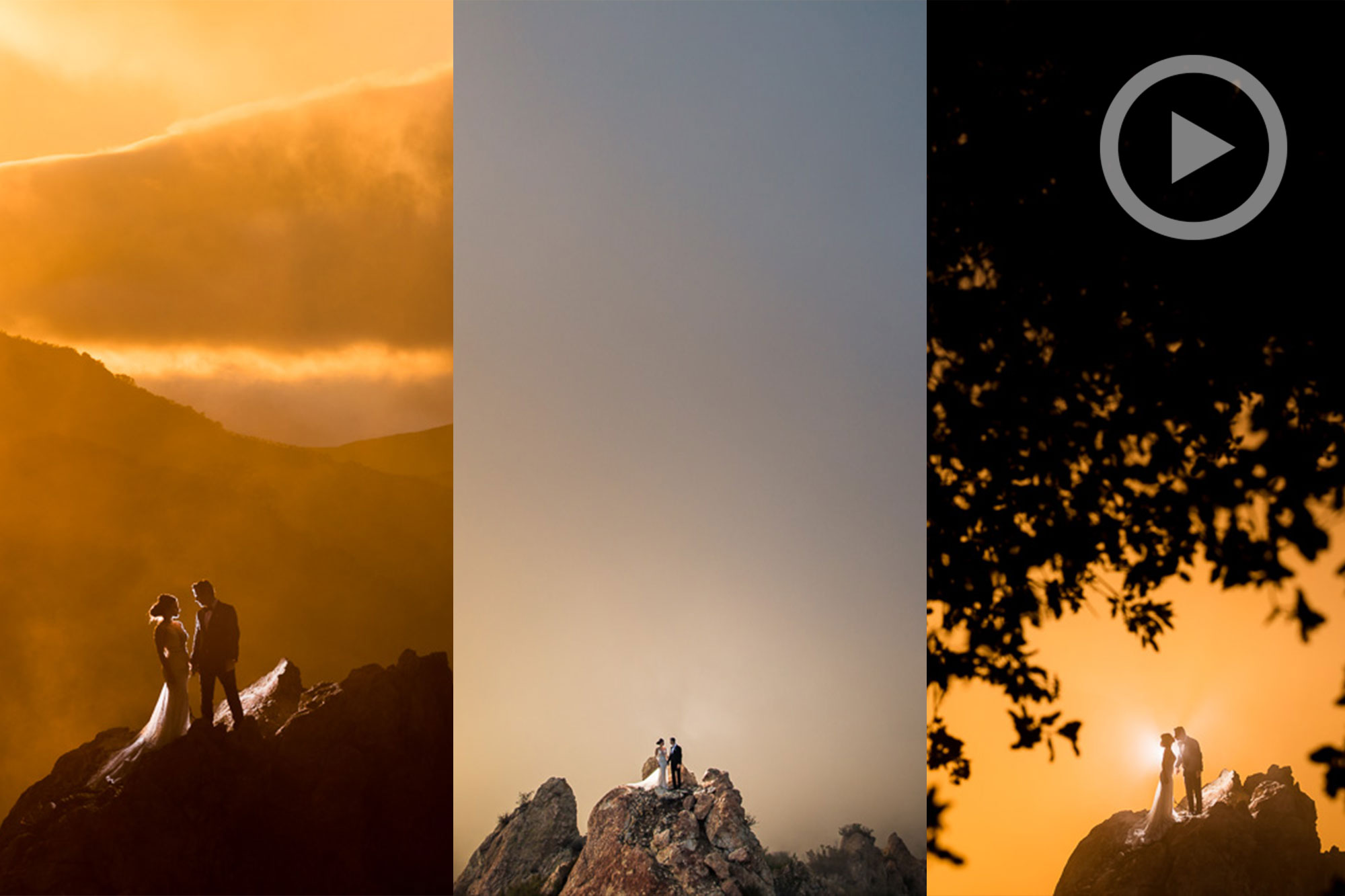 10 Ways To Light & Shoot The Same Scene With Profoto

I want to make a positive change in our industry by changing the perception of helping and educating other photographers. It’s not always about claiming boasting about the originality of your art but making your work different so that it represents who you are as an artist based on your life experiences.

In this tutorial, we are going to show you how 10 different shooting and lighting techniques were used to create 10 different images from the exact same scene.

This shoot takes place in Malibu Rocky Oaks Estate, a beautiful winery tucked away in the hills of Malibu, California. Known for its epic views of the Malibu Hills and prolific vineyard, it was the perfect backdrop for the premise of the tutorial – even with expansive views ranging around the property, I chose to work in one specific location to prove that multiple compositions can be made in one spot when you are pressed on time.

A dense fog rolled through the scene just as we set our couple atop the mini-rock mountain on the property and we began shooting immediately; this is when the magic began. 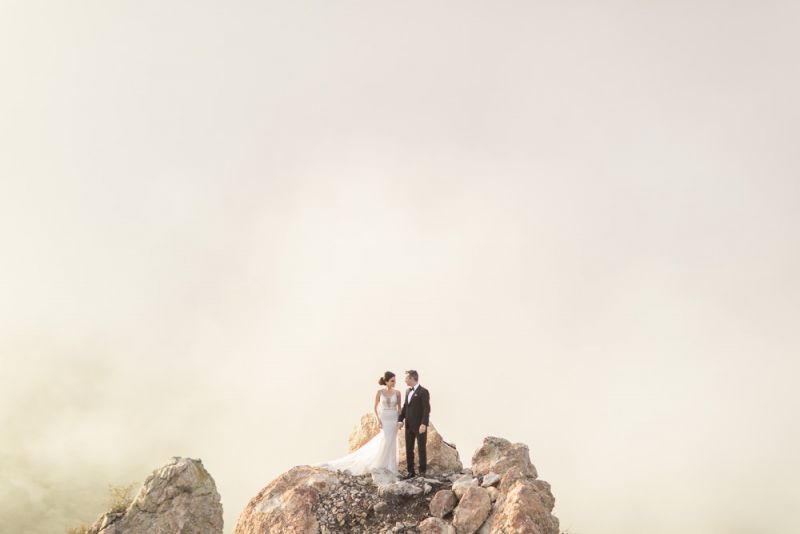 We placed the Profoto B2 behind the couple to give them a subtle edge light to help them pop out of the scene since the fog was a bit thick. This shot was intended to be on the bright & airy side and we accomplished that using high speed sync and full power on the Profoto Remote and shot the image at 1/2000th of a second, f/1.2, ISO 100 on a Canon 5D Mark IV with a Canon 85mm f/1.2. This shot was taken at 5100 Kelvin which is important to note for the remainder of the shots considering an image can vary drastically with a color temperature shift. 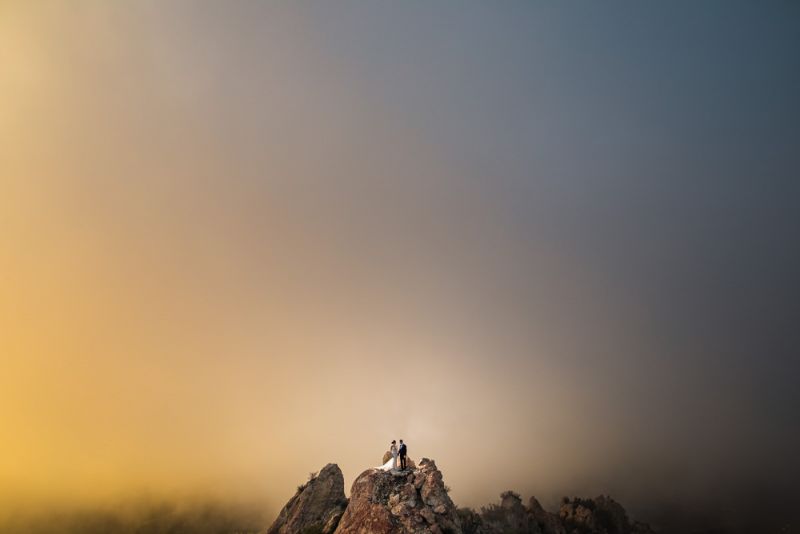 We then switched to a Canon 24mm f/1.4 to get more of an environmental portrait capturing the vast beauty of the landscape. By powering up the B2 and darkening our ambient light exposure we arrived at this second image. This is a technique we’ve covered many times in Lighting 101. The final settings for this image were 1/200th of a second, f/7.1, at ISO 100 and 6000K.

[REWIND: NEVER FAIL AGAIN WITH THE HELP OF RELIABLE GEAR]

From that same position we quickly panned the camera to the left of the couple and then to the right to create a panoramic stitch of the scene. Although similar to the previous shot, this image offers a wider perspective of the scene without hopping onto a wider lens and sticking to the same camera settings. 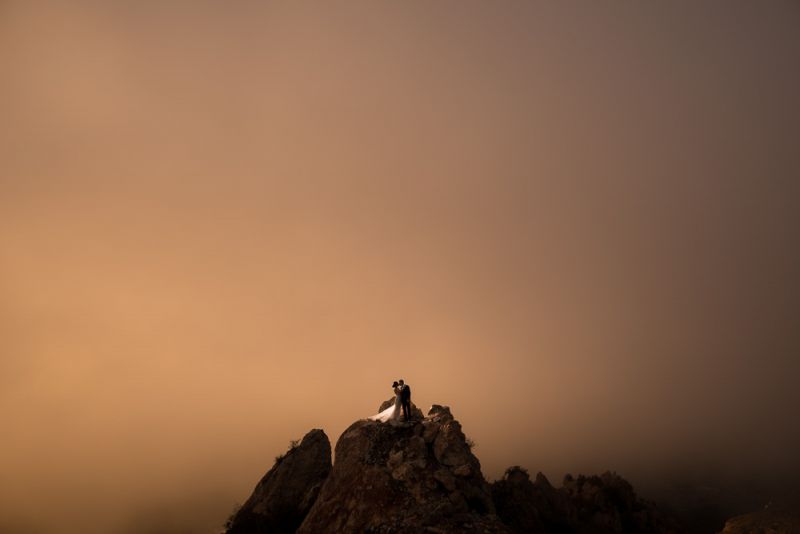 Staying on the 24mm prime, we then dialed down the power of the B2 while maintaining the same camera settings with a slight tweak to the white balance arriving at 8000K. This yields a more silhouetted image while still portraying a different mood and feel since the scene darkened due to an increase in cloud cover, something we wouldn’t have been able to shoot through if we decided to move the couple to a different scene. 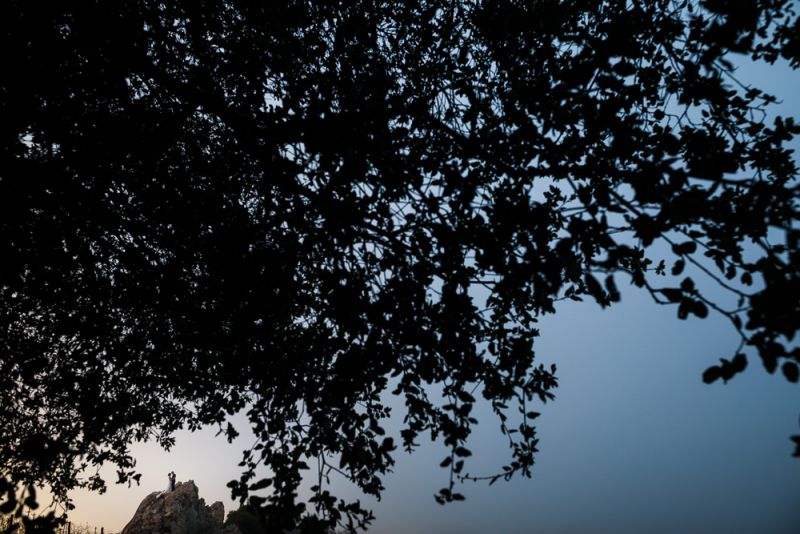 Still shooting on the Canon 24mm f/1.4, I quickly wandered through the property to find elements to shoot through to create foreground in the frame. We stumbled across a tree that perfectly frames the couple and bumped up our ISO to 400 to compensate for the loss of light due to the intense fog that rolled through as I was traveling to this spot.

4b. Telephoto Shoot Through Angle 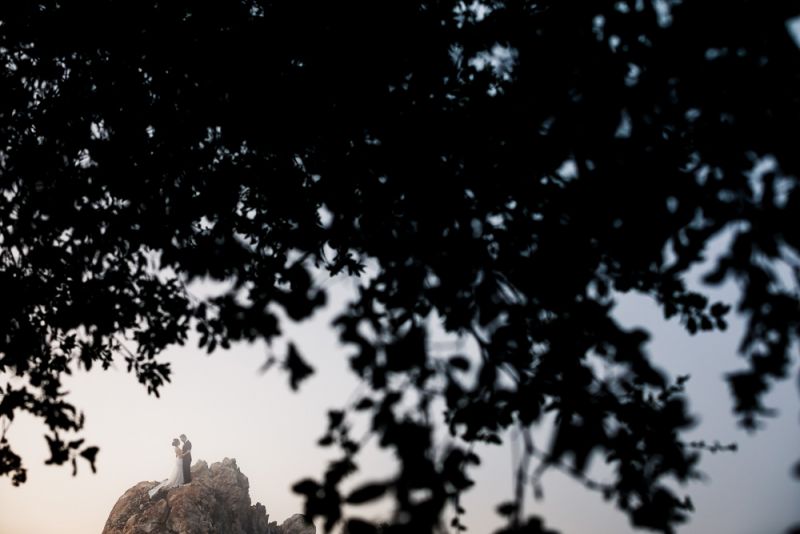 Although the previous shot showcased the vast space of the property, I felt the couple was a bit to small for the frame. So, hopping onto a Canon 70-200mm f/2.8 , I created this next shot and adjusted my settings to 1/200th of a second, f/5.6 @ ISO 400 in natural light. 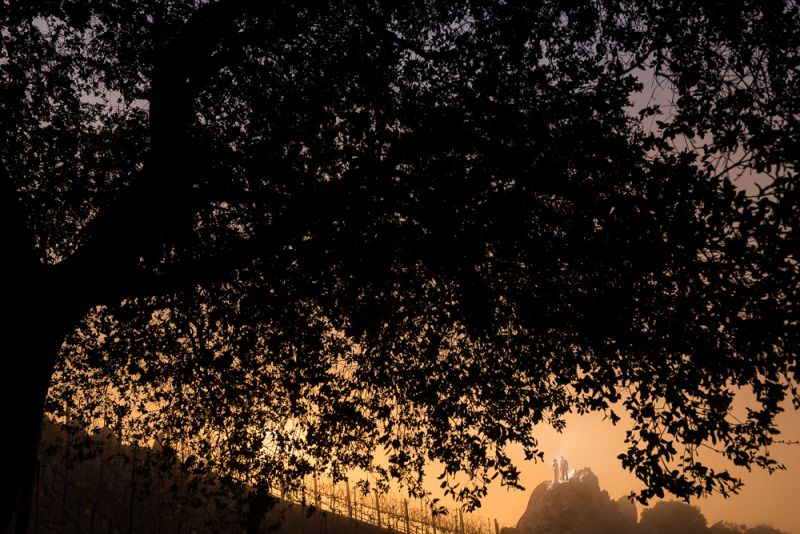 The fog then started to clear up and in came a large orange sun peeking through giving the sky a rich golden color that all photographers know and love. We dialed in our in-camera white balance to 5800K and turned the Profoto B2 back on to create a stunning backlit environmental portrait with the same foreground element, but this time changing the framing so the couple is placed on the right third of the frame. We hopped on a Canon 35mm f/1.4 and captured this image at 1/200th of a second, f/7.1, @ ISO 200 since more light entered the scene. 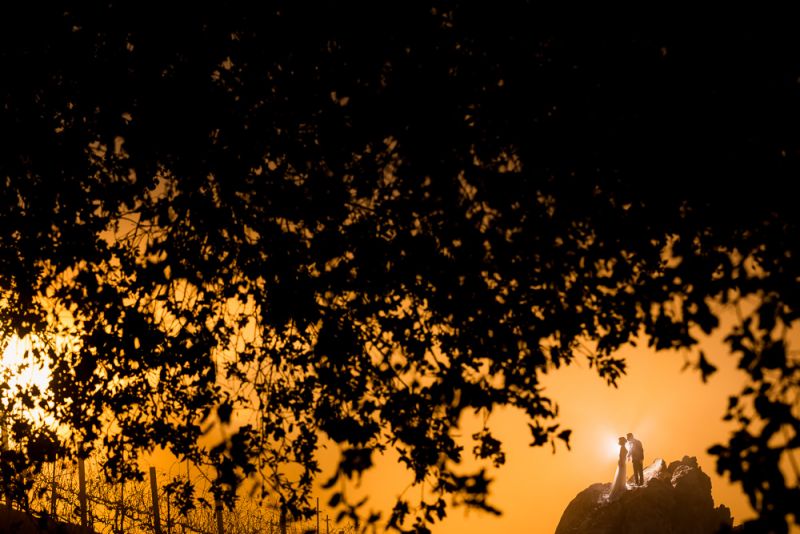 With the exact same camera and light settings we were able to create a more intimate shot showcasing the couple with the 70-200mm. It is important to note that all these images were post-produced using the SLR Lounge Preset System, finishing off each image with the perfect amount of contrast needed for the scene. The backlight for this scene was fired at 1/4th power as to not overpower the scene. 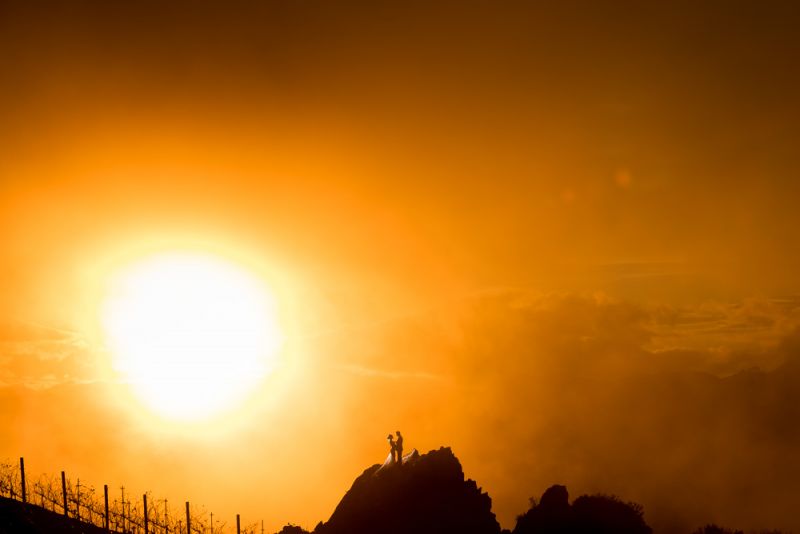 Moving my vantage point again I saw that the sun was fully out at this point and quickly created this silhouette and changed my camera settings to 1/200th of a second, f/14, @ ISO 200 while maintaining 1/4 power on the Profoto B2 just to give a little boost to the natural rim light hitting the couple. 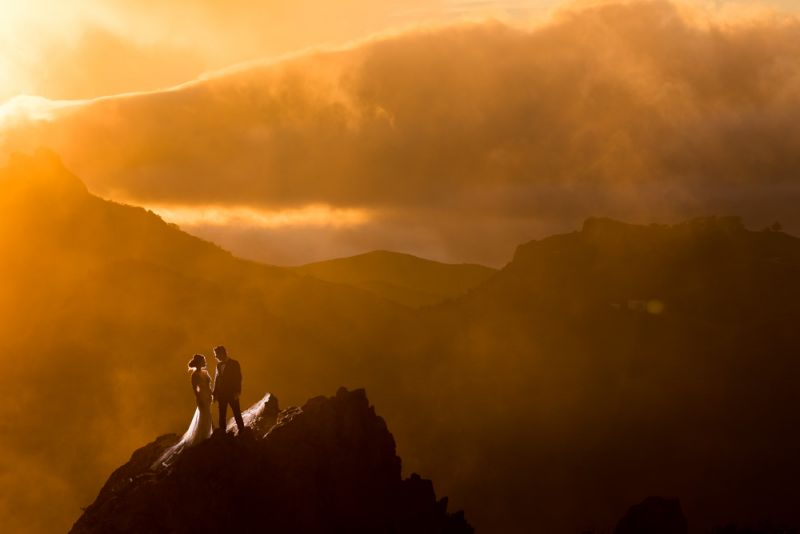 Zooming into 200mm we changed up the couple’s pose and still fired that back light to help carve the subjects out of the scene. 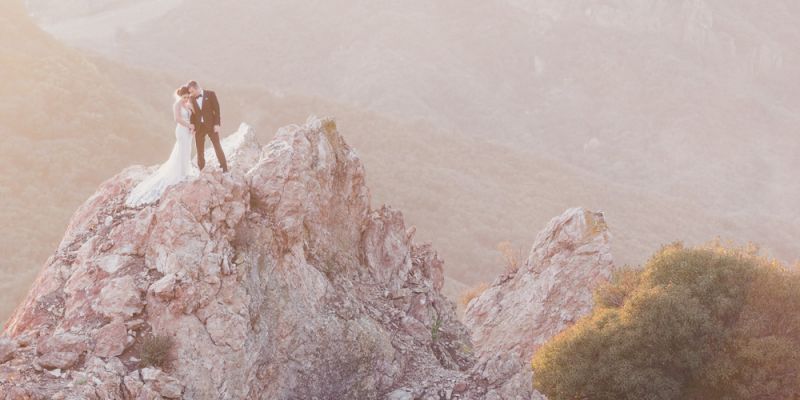 For a complete change of pace we dialed our settings to 1/100th of a second, f/7.1, @ ISO 400 to give more of an bright and airy effect to the scene while still firing the B2 but pulled the power down to 1/8th. 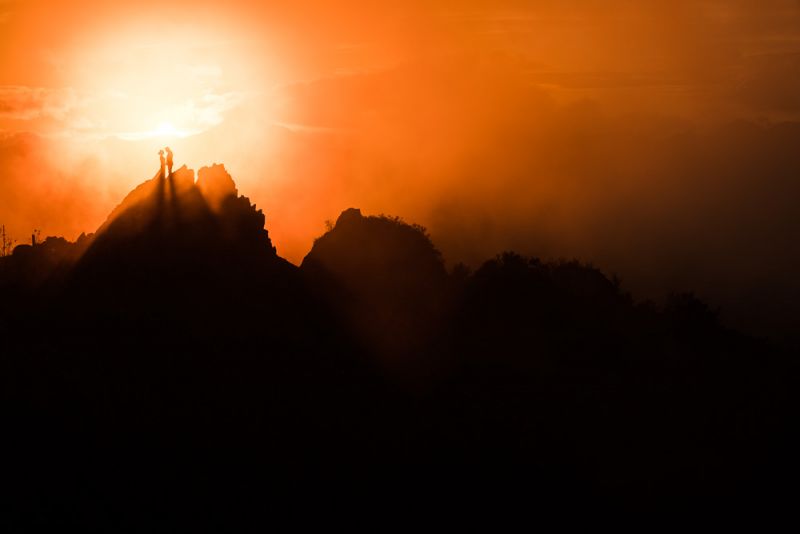 Stepping down from our current vantage point, we framed the couple directly in front of the sun to create this natural light silhouette while still being aware that our settings were completely changed from the bright and airy shot above. We quickly dialed in our camera settings to 1/200th of a second, f/9, @ ISO 100 and shot this epic wide. 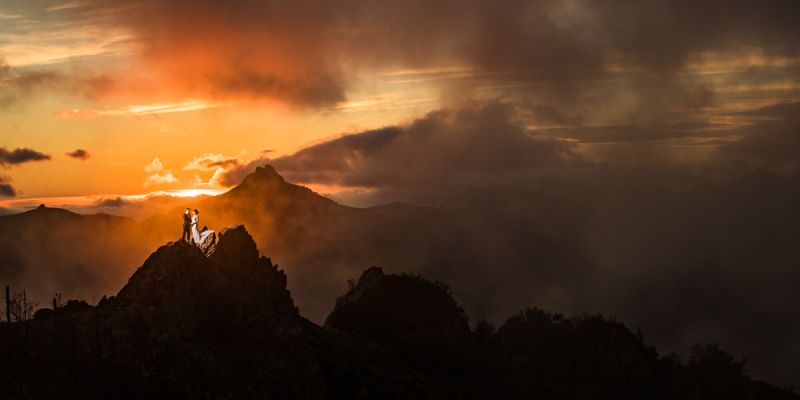 And last, but certainly not least, we took this shot as the clouds started clearing up and the sun began to set over the mountain tops. I had an assistant bring the B2 around to the front of the couple and carved them out of the scene with the appropriate amount of light to balance with ambient exposure of the scene. At 1/200th of a second, f/9, @ ISO 100 we lit the couple with the B2 at around 1/2 power to arrive at this incredible final image.

There you have it, 10 ways to light and shoot a scene without having to move your subjects from their spot all within a 20 minute span of time. The way that we light, the way that we pose, and the way that we shoot is nothing new or original; people have been doing this for years now. This isn’t to say that we aren’t amazing and talented individuals in our own right, but your photography is simply a culmination of your experiences that you’ve adopted from those before you.

Be apart of an incredible community of artists at SLR Lounge that strive to inspire, education, and learn from one another. See the rest of our tutorials with Profoto here.