SLR Lounge > Inspiration > Photoshop vs. InDesign: Which Is Better For Album Design? 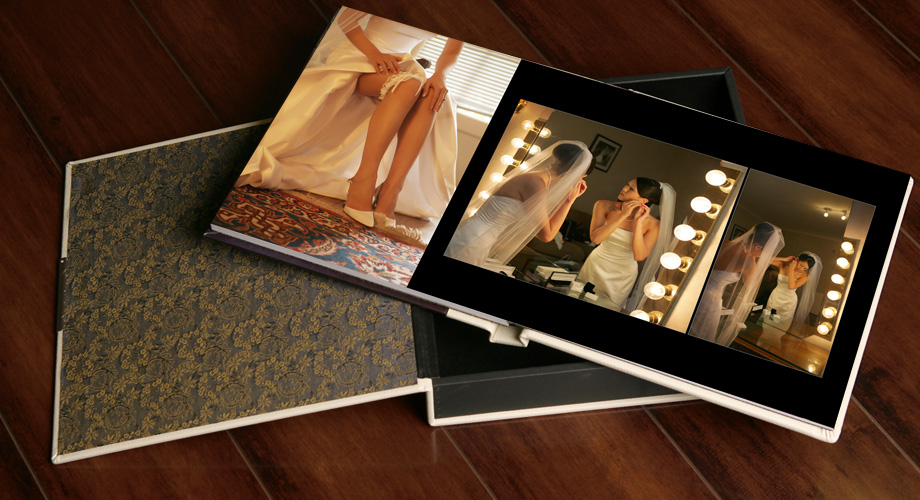 Photoshop vs. InDesign: Which Is Better For Album Design?

Photoshop or InDesign – which one to use for wedding album designs? This is an age-old question that has been debated by photographers on various forums for years. Photoshop addicts claim that anything can be done in Photoshop, while InDesign lovers remind us that InDesign was built groundup as a layout tool.

In this article by Modern Album Designs, we will discuss the pros and cons of both software in respect to their use for designing wedding albums. (And don’t forget to enter their Free Album Giveaway here!)

[REWIND: Check out 5 Keys to a Modern Album Design]

With Photoshop, editing and retouching images can be done directly:
During the album design process, chances are you might need to adjust some of your images. These adjustments can be as simple as brightness or color adjustments, or as complex as swapping people’s heads. If you design using Photoshop, all the image enhancement tools are right there for you to use. Furthermore, your design style might require you to create complex cross-gradient fades and other special effects…..again, you can do it all without interrupting your design workflow.

Advanced JPEG and RGB capabilities:
Digital images are bitmaps, and Photoshop is a software built to handle bitmaps. Most album companies and labs require you to submit JPEG files for printing, and Photoshop has scores of options in generating JPEG images. InDesign, on the other hand, has a history of limitations (and difficulties) in generating JPEGs….so much so that most advanced users chose to export to PDF first before sending the PDF document into Photoshop to do a final JPEG conversion. Even with the latest InDesign CS5, users are not able to select image interpolation methods for their JPEG exports.

Layout capabilities limited since it was not built as a layout software:
As mentioned above, Photoshop is a software built to handle bitmaps – it was not built to specialize in layouts. Thus, many useful tools that one would expect to use during the design process are either missing or hard to use within Photoshop (e.g. alignment tools, text wrapping, etc.)

Once images are sized down, you can’t (shouldn’t) size it up again:
Size an image down within Photoshop and the software will remove actual pixel information….thus, if you made a boo-boo and downsized an image during layout, you would need to drag in the original image again. (We hope you already know why you should not size an image up once you sized it down….).

Images are embedded into the files:
When you place an image into a Photoshop canvas, it will actually place all the image data into that document. There are two side-effects to this: 1) The document size will be very large after you place a few images in. 2) If you decide to use another software (or another person/company) to modify the images, you would need to manually replace the old images with the new modified images. (more on this when we discuss InDesign below)

Each file can store a single page:
Each Photoshop PSD document stores only a single page (spread) for your layout. Thus, if you have 50 spreads, you will end up with 50 files. To re-arrange your layout, you would need to rename multiple files.

InDesign is designed as a layout tool:
A simple statement, yet it has powerful undertones. With a layout tool, you get access to many features that Photoshop users would die for. Ever tried to populate a grid of 16 photos in Photoshop? Wrap a paragraph of text around an image? These are child’s play for InDesign.

Images are “linked” and not stored:
When you place an image into InDesign, the software only places a low-res version of that image into the document, and then stores the path to the original image. This has several implications. First, the file sizes are dramatically smaller – thus, allowing you to manipulate the layout faster. Second, feel free to size the image up and down, and back up again…it doesn’t matter since InDesign is not utilizing the original high-res image until you export. Lastly, and perhaps most useful, you can use another software (or person/company) to modify the album images and have InDesign automatically “re-link” the modified images into your layout.

A single file can contain multiple page layouts:
A single InDesign file can hold multiple pages. Thus, your entire album layout is contained in a single file. Want to re-arrange the position of the pages? Simply drag them into the right order….no need to rename multiple files.

Limited image enhancement capabilities:
InDesign has limited capabilities to modify/enhance images, but beyond that, you would need to use another software (most likely Photoshop) to further process the image. This means that you would need to interrupt your design workflow, open up Photoshop, do the necessary adjustments, save the image as a different file, and re-import it into InDesign.

Limited JPEG output options:
As mentioned earlier, InDesign has had a troubled history with JPEG exports. The latest InDesign CS5 hopes to solve most of that, but the verdict is still out as to whether JPEG exports are reliable or not.

But wait! What about specialized album design software such as Photojunction, FotoFusion, JAD, and other various template-based tools?? While those are not within the scope of this article, if you do own copies of those, you should certainly use the above comparison points to see how it stacks up against Photoshop and InDesign.

Click here to join our giveaway for a Free Album by Modern Album Designs. Don’t wait, it ends August 31st, 2013!