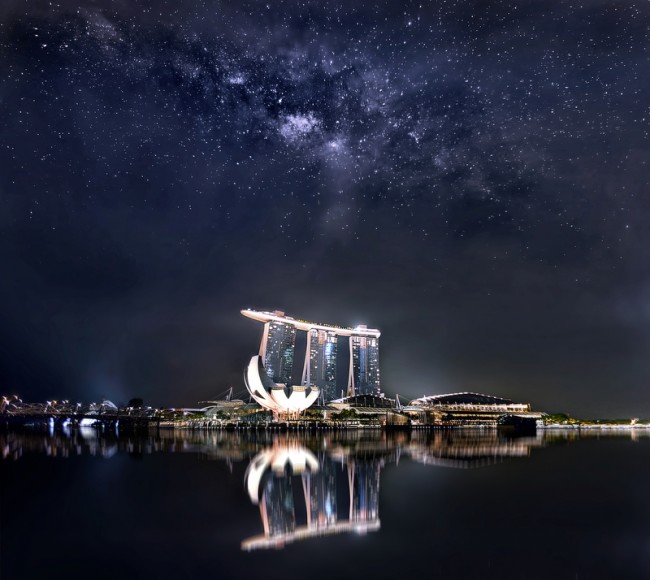 Light pollution in urban skies makes it almost impossible for any aspiring astrophotographers to pursue their craft here in Singapore. Since I started deep sky astrophotography in August 2013, I have been asking myself if it’s really impossible to capture the Milky Way galaxy in Singapore and so, I’ve decided to make my first attempt in February 2014, with the help of my web-based astronomy tool, after the monsoon season was over and voila! I could see it! All hope was not lost after all.

And if a single-exposure image is not convincing enough, I have also filmed a time-lapse video (before I took the lonely tree shot,) showing both the Milky Way and planet Venus rising over the light-polluted skies of Singapore, using just a normal DSLR camera and lens.

It seems that every time I present my Milky Way images taken in Singapore, they are met with a considerable amount of skepticism from not just the stargazers and photographers alike, but also the most experienced astrophotographers in Singapore. This came as no surprise for me because I was shooting at various locations where people don’t look up.

In April 2014, one of my Facebook followers challenged me to shoot the Milky Way at one of the Singapore landmarks, which also means shooting at a location with less than 20 stars above us. I thought that was a good opportunity to see how far I could go to unveil the elusive Milky Way that’s obscured by the extreme light pollution in the area, so I accepted the challenge. After weeks of tweaking and experimenting, I finally managed to produce an acceptable image quality of Milky Way rising above the world’s most expensive building, the Marina Bay Sands.

While the majority of the people are still debating on the possibility of unveiling the Milky Way galaxy in Singapore, Ivan Bok Yi Jun (20-year-old), along with a few of my other friends already know it’s possible. Ivan also proved that we can do much more in Singapore with his series of stunning images of deep sky objects.

Ivan Bok has been into practical astronomy since he was 14 and he began dabbling into astrophotography as he moved along.

“Capturing these images was not very difficult per se. However, there have been many setbacks, and getting a successful imaging session does not happen very often. Most of the time, I would go home with little useful data, often because of bad weather or equipment issues. There are many things that could go wrong when it comes to astrophotography, because of the interplay between all the systems, as well as factors that are entirely out of our control, namely the weather. Furthermore, as I am serving military service, I am only able to image on the weekends. Finding a night in the weekend when the moon is not around and when the weather is favorable can be challenging indeed.”

See some of my other work on my website. Justin Ng is a Singapore-based astrophotographer and he has garnered his photographic experience from a diverse range of subjects, events and locations eventually earning recognition and publication in world-famous media sources like the BBC, CNN, National Geographic, Yahoo!, Space.com and just to name a few. Check out his work and his blog at www.justinngphoto.com