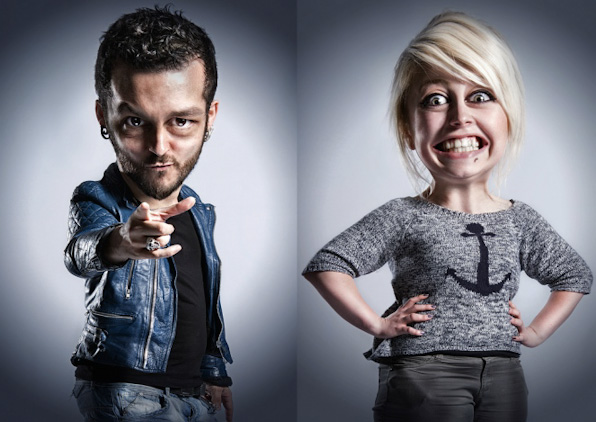 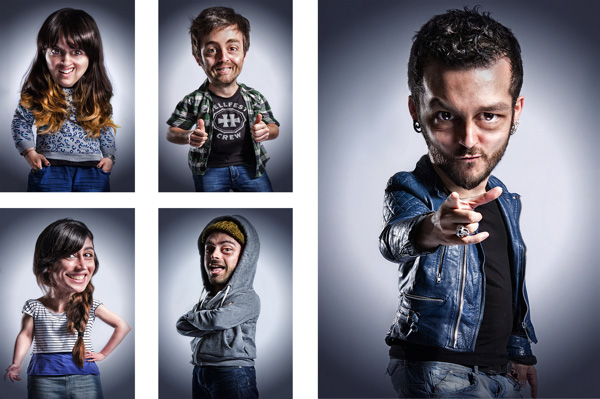 To some, this may come across judgmental. To some degree they’d be right, but the fact is, when I’m at a party, a gallery event, or a dinner, I’m always scoping out the women. I look around at all the attractive girls who’ve got their skirts made from napkins, their noses from a catalog, and personality from Cosmo, and I hope that I get seated next to the girl who has the aerodynamic properties of a bungalow. That way I’m more likely to have a laugh, and interesting conversation. I mean no disrespect to the others, it’s just very difficult to be funny if you’re really attractive or serious. Cheerfulness, is too sparse.

In the art world, photography included, the attitudes are similar. For whatever reason, perhaps as the artists’ attempt to prove intelligence and validity, a lot of work is very serious, and that’s fine. Sometimes though, it’s disarming and refreshing to see quality photography work with a sense of humor. When looking at photographer Lee Howell’s caricature set, relief and a smile washed over me like a warm Caribbean breeze. It’s not a wonder that this project, and his work in general, have garnered worldwide acclaim, most recently being chosen as an Adobe featured artist. 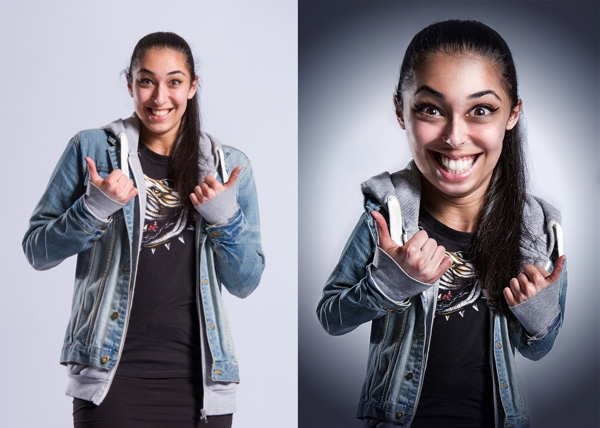 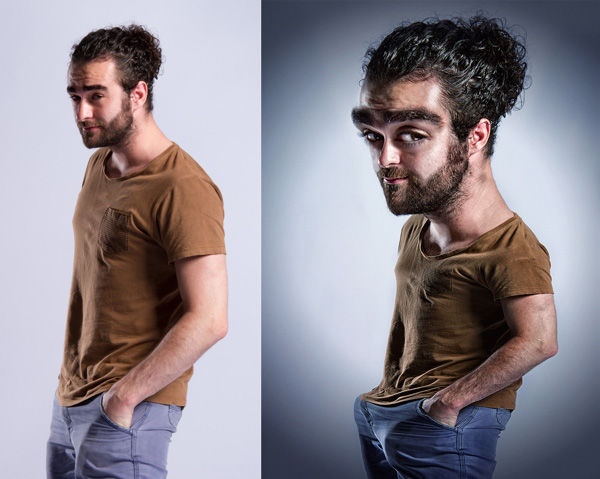 Howell is adept at retouching and compositing but strived to see what could be done with digital manipulation in portraiture. While the project is named ‘Caricature’ the name does injustice to the product as caricatures are a dime a dozen, this is so much more. Conversing with Lee back and forth, is telling to his personality and why this project turned out how it did. Ever patient and forthcoming, Howell wanted to be respectful to his subjects’ feelings, ergo choosing not to exaggerate imperfections or items like a large nose, and ended up with something that was true to form, but liked by the subjects themselves.

They are more like comical Pixar characters or digital avatars of them selves than say that of the pencil and paper caricatures which traditional street artists create. 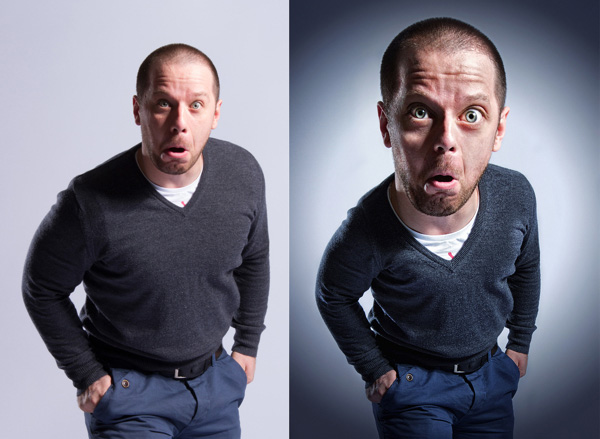 Initially, strangers were subjects, but upon showing his fellow graduates at Edinburgh College, they all thought it a great idea to do the same as a fitting memento to leave as they all parted ways. The results are what you see here, and were such a success that the decision was made to use the project for advertising the Free Range Graduate Exhibition in London. In an almost perfectly suitable match, the poster of the iconic film Trainspotting was the influence in design. 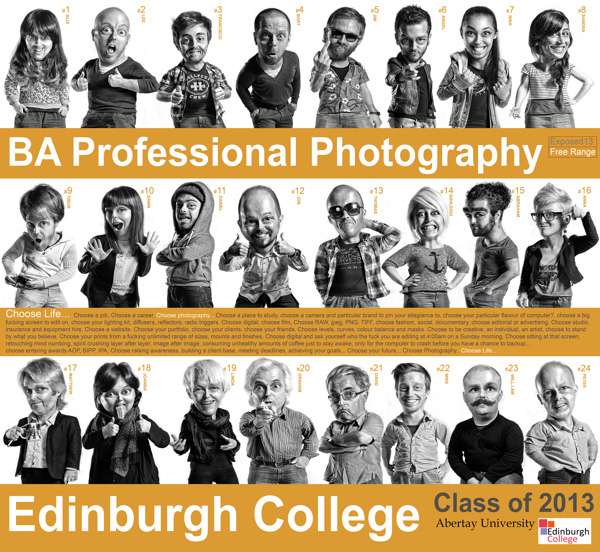 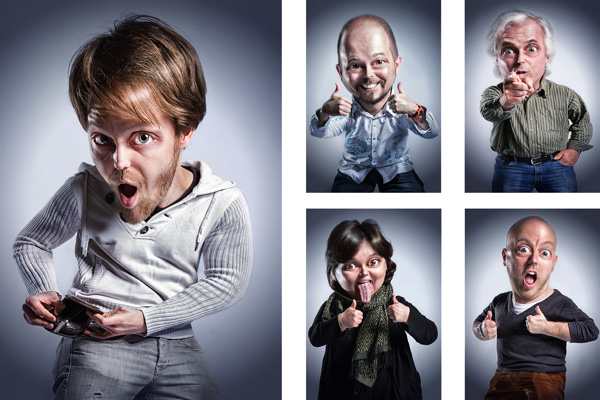 What Equipment Was Used?

The images were shot using the Canon 7D with the Canon 24-70mm f/2.8. Elinchrom soft boxes were used to diffuse back light against a white backdrop. There was a key light to the right diffused with a large beauty dish to help bring out definition in the images, and a gridded spot light to the rear right used to give catchlights to the shadowed area. While he didn’t use Lightroom  for this project he does foresee using it more in the future. For ‘Caricatures,’ Adobe Photoshop was primary with the aid of some Nik Software, Silver Efex and Colour Efex plugins. 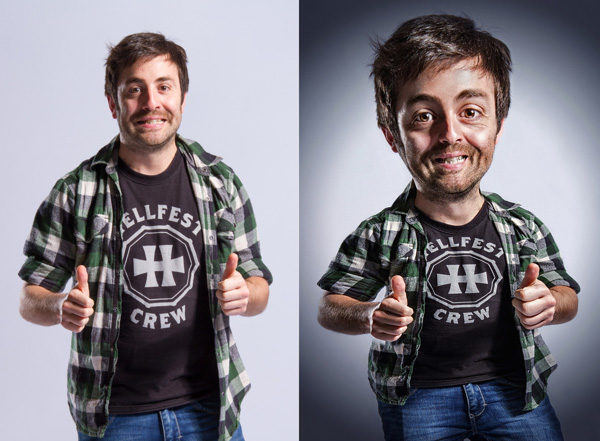 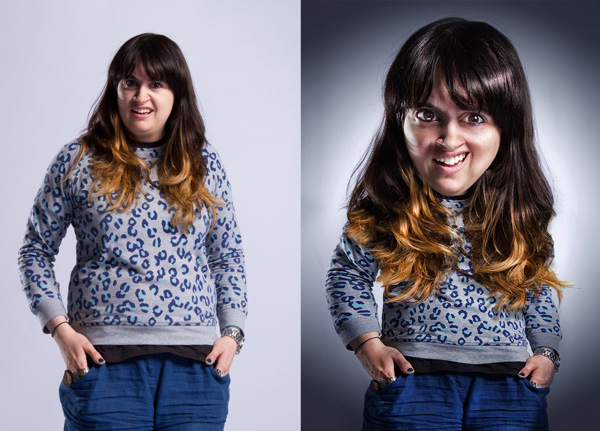 As the current Caricature set features colleagues the nature of them is very personal and likely will not see future commercial use. However, Lee told me he has had a flood of interest by companies wanting to commission his services to produce similar work for advertising and promotional use. He seems to be wasting no time and is planing different scenarios and suitable comic themes to further breathe life into the caricatures that already have changed his.

You can see more from Lee and keep up with his work on Behance, Facebook, and his site, and doing so would be time well spent. His work is fantastic.

CREDITS: All photographs shared by Lee Howell are copyrighted and have been used with permission for SLR Lounge. Do not copy, modify or re-post this article or images without express permission from SLR Lounge and the artist