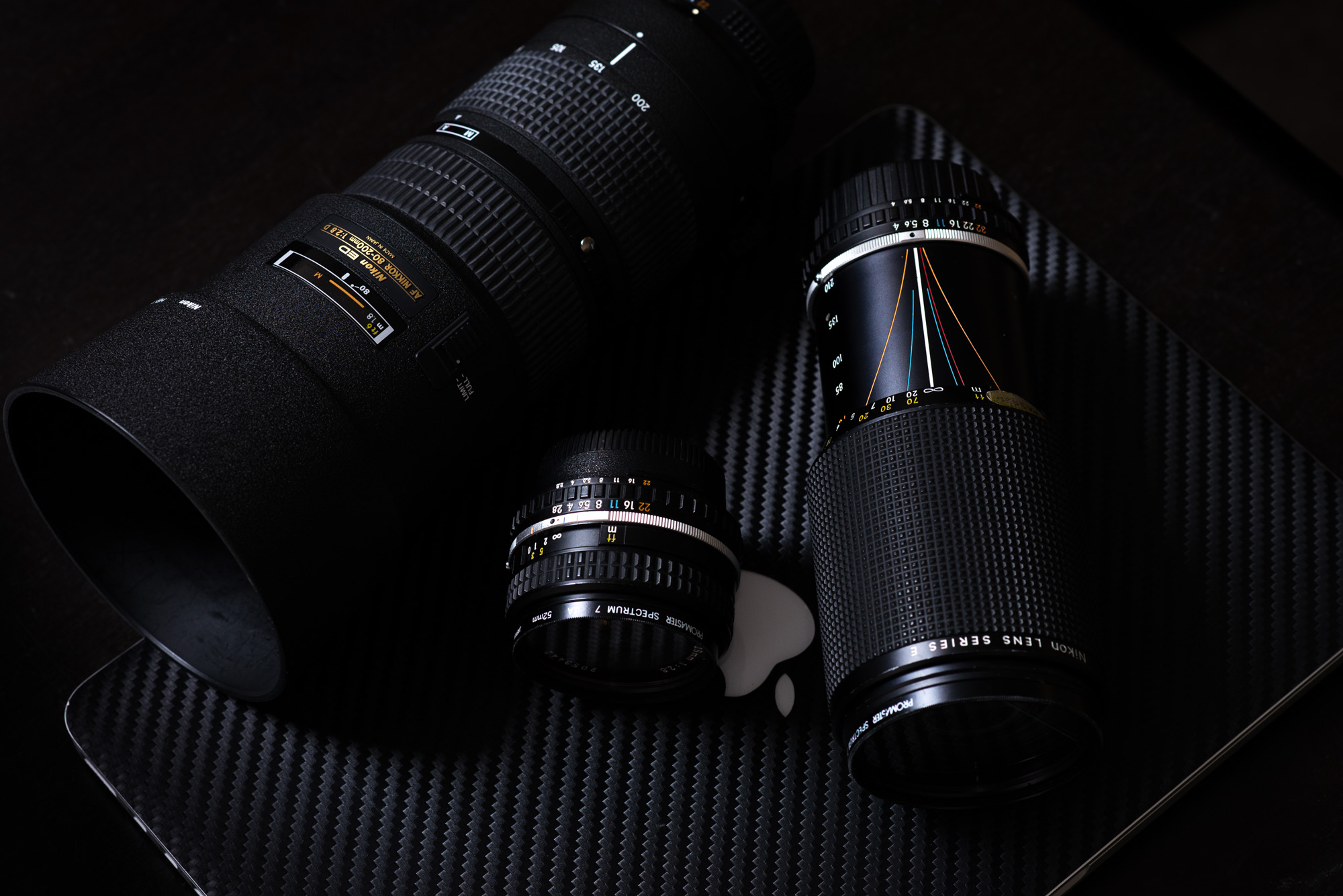 Camera brand loyalty is a strange thing if you were to ask me. Camera companies generally do little for us as individuals; your father unlikely worked for the company, they don’t call you on your birthday, they don’t rub your head when you’ve got a headache, all can do a very good job at shriveling your wallet, and I know I’ll get some scoffing at this, but really they all pretty much do the same thing. Spare a very few situations and circumstances, give me, or any competent shooter a Nikon or Canon or Pentax or what have you, and we’ll be able to execute pretty much the same shot with each brand. So why then, do we tend to have an affection for one and not the other?

Well, I believe it often has something to do with what you grew up with, what was your first, what you associated with good equipment, and then as a consequence, buying into it and not wanting the trouble inherent with shifting systems. For me, it’s Nikon, and I’ve always been that way. The first baby pictures of me were taken on a Nikon, a Nikon I still have to this day an with the same lenses, too. It’s not just a sense of nostalgia that I enjoy, and when I transitioned to digital some many moons back, I didn’t like the idea of those lenses tucked away, but they just weren’t practical to be used on my then-current DSLR. 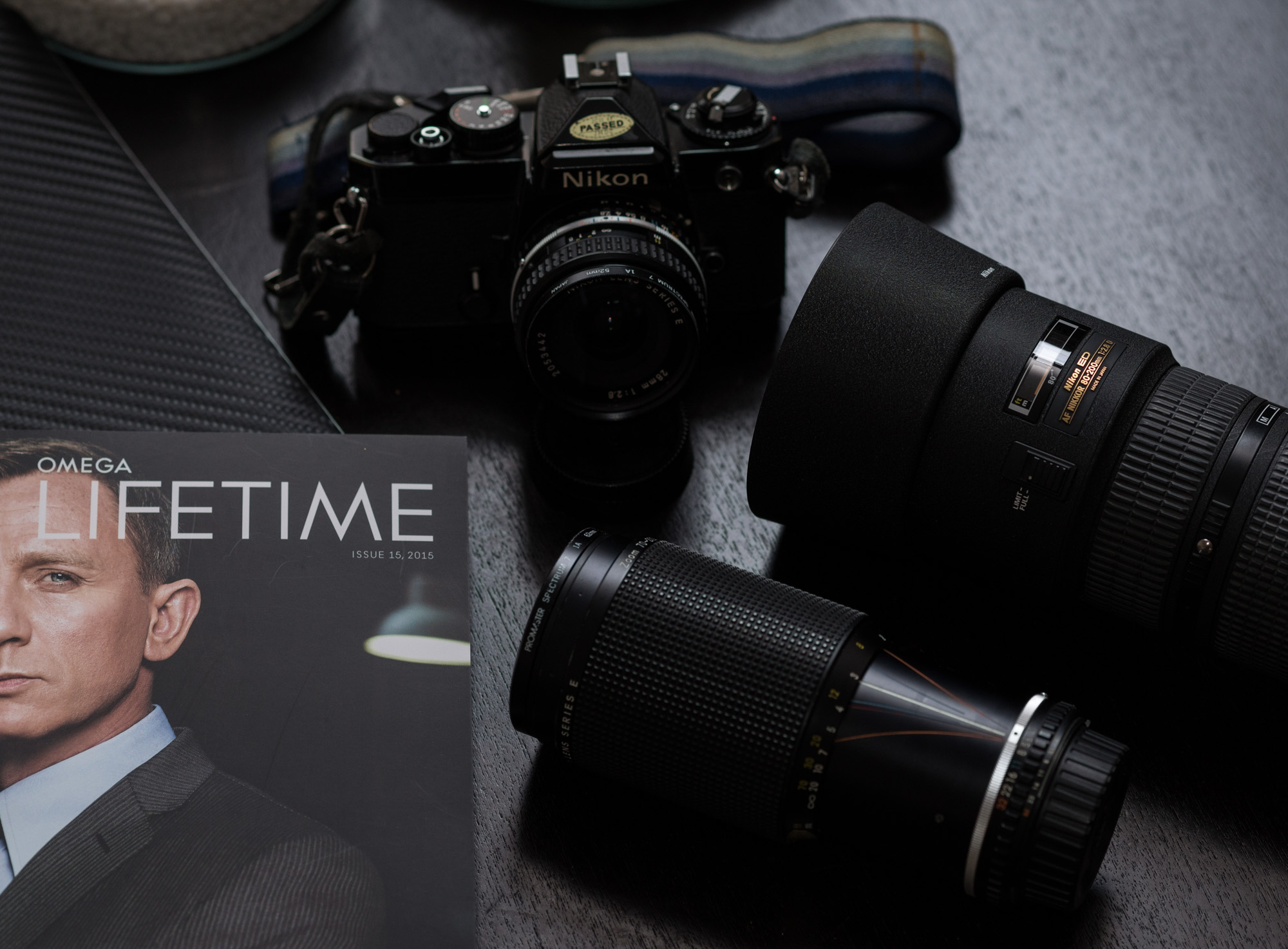 Older lenses that were manual focus, like the legacy Nikon F-mount lenses, had brilliant optics and control, but no brain. Unlike modern lenses that are ‘chipped’, they couldn’t digitally communicate with the camera, so there was no AF, and couldn’t even speak automatically to the cameras to tell them what aperture they were at, and what focal length so metering properly was non-existent. This renders them somewhat useless for most people with modern DSLRs, and that’s a shame. Nikon, however, seems to love their old lenses as many of us do. Thus, on many modern, albeit higher-end Nikons, there exists a menu option in the SETUP Menu called Non-CPU Lens Data. If your camera has this, it means you can pair your old lenses and breath life back into them for use with your current body.

Currently, there are a number of higher-end Nikon DSLRs that have an aperture indexing (AI) ring built in, which allows for meter coupling with lenses that can’t digitally communicate with the body. These Non-CPU lenses simply don’t have the chip and contacts on their mount and, therefore, can only communicate with the new bodies via aperture (manual aperture ring – your camera body won’t be able to adjust aperture any other way).

What you’ll see here is how Nikon allows you to set-up the Non-CPU lens data on your camera which will give you pretty much the same functionality you’d get from a modern but strictly manual focus lens. So what am I talking about? Probably the biggest one here is metering. Once you input the data as I’ll explain, your camera will know some parameters of the lens and will actually allow for the internal metering system to work, and that’s a big deal. This means you can shoot as you do your other lenses pretty much, and furthermore, it allows iTTL to work properly, and automatically. Nice right?

Here’s what to do: 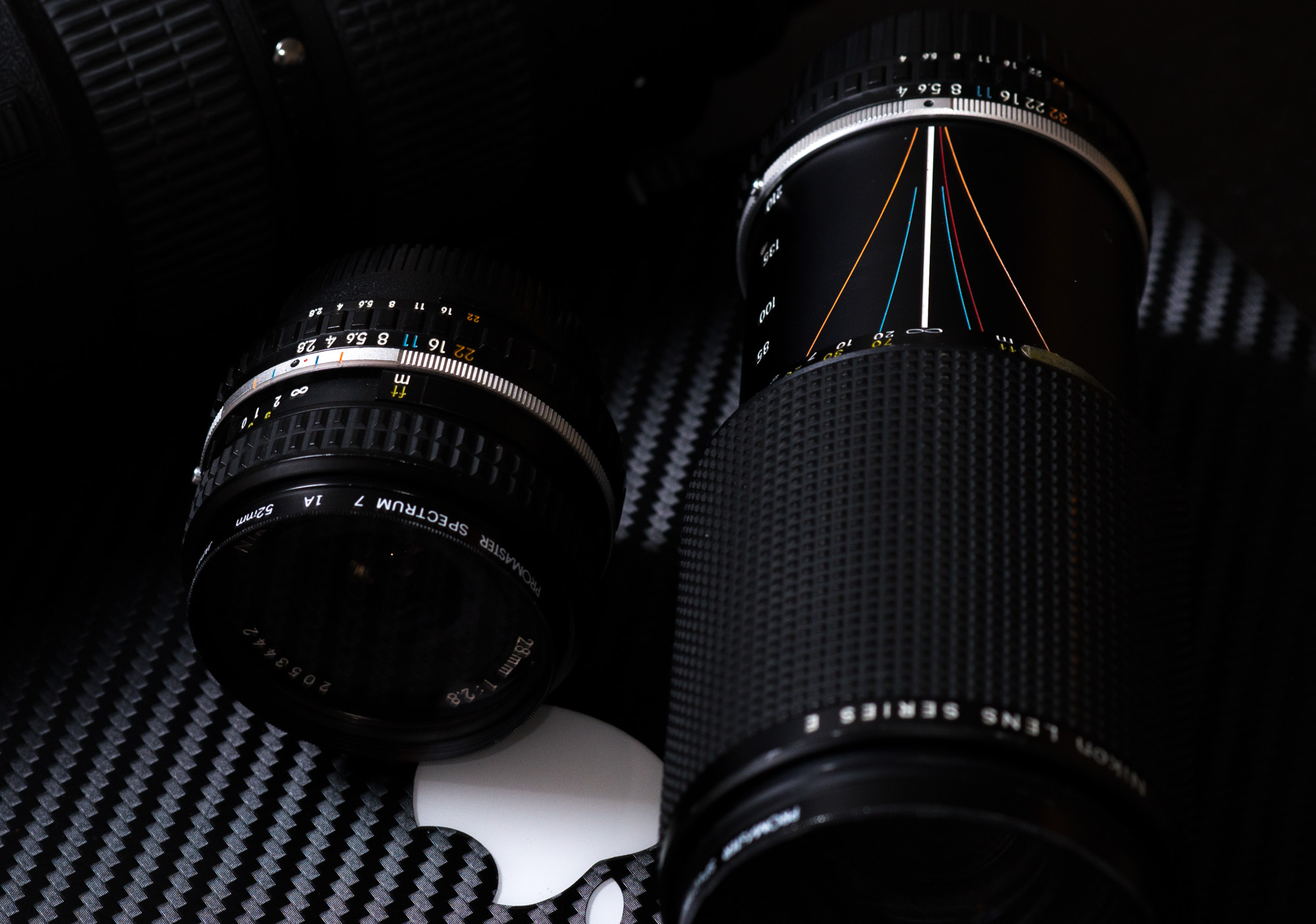 *I’ve been told that Non-AI lenses should not be mounted on Nikon DSLRs without the ring as they give massive trouble to dismount and often cause damage. Apparently, however, if you get your Pre-AI lens serviced by Nikon they can make it AI.*

Hit the MENU button, and scroll down to the SETUP MENU (the little wrench). 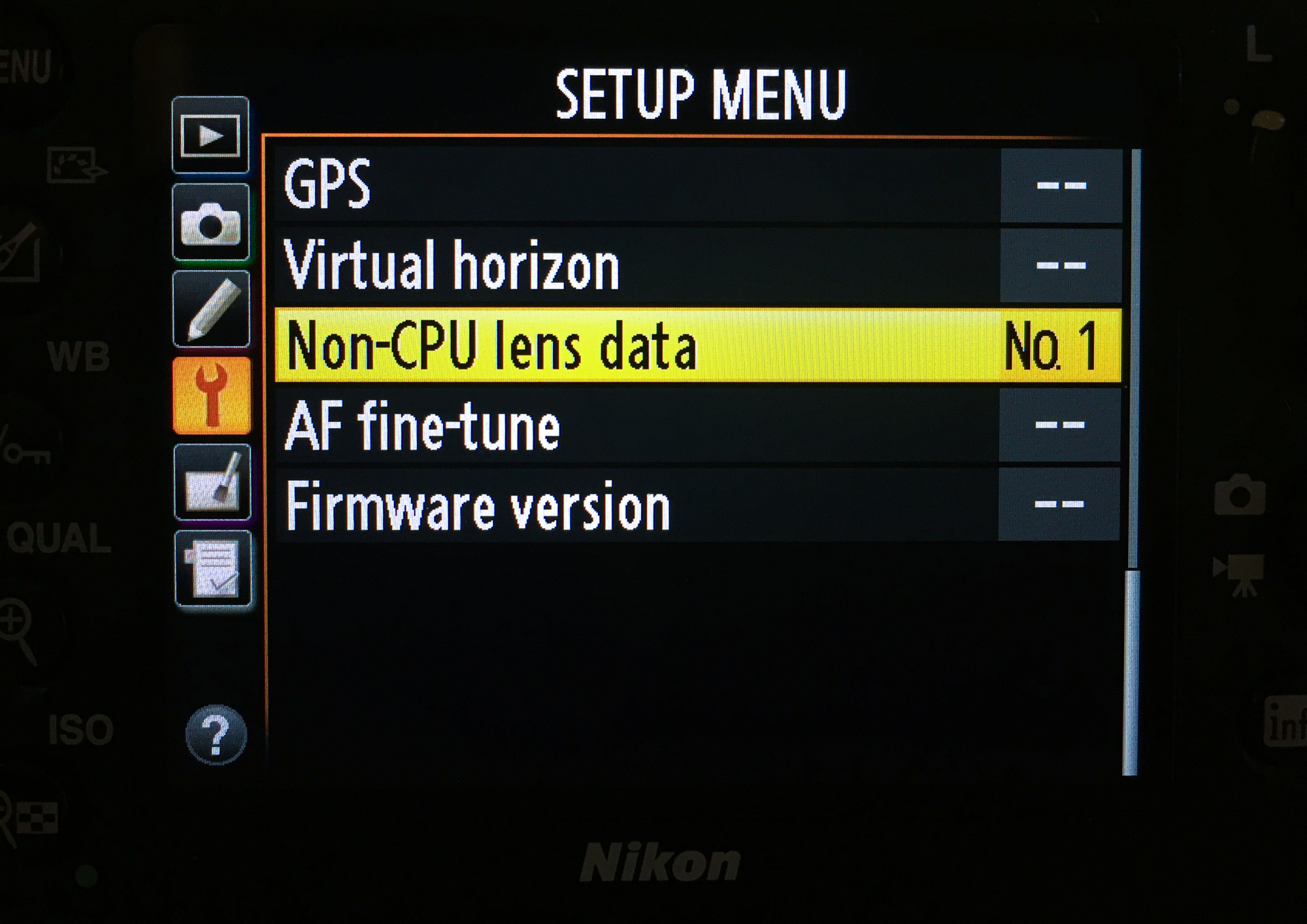 Scroll down and near the end of that menu, you’ll see Non-CPU Lens Data. Select it, and the next screen will present you with a few more options: Lens Number, Focal Length (mm), Maximum Aperture.

Under lens Number, choose any, and you can program up to 9 lenses! I start with one because I’m just original like that. 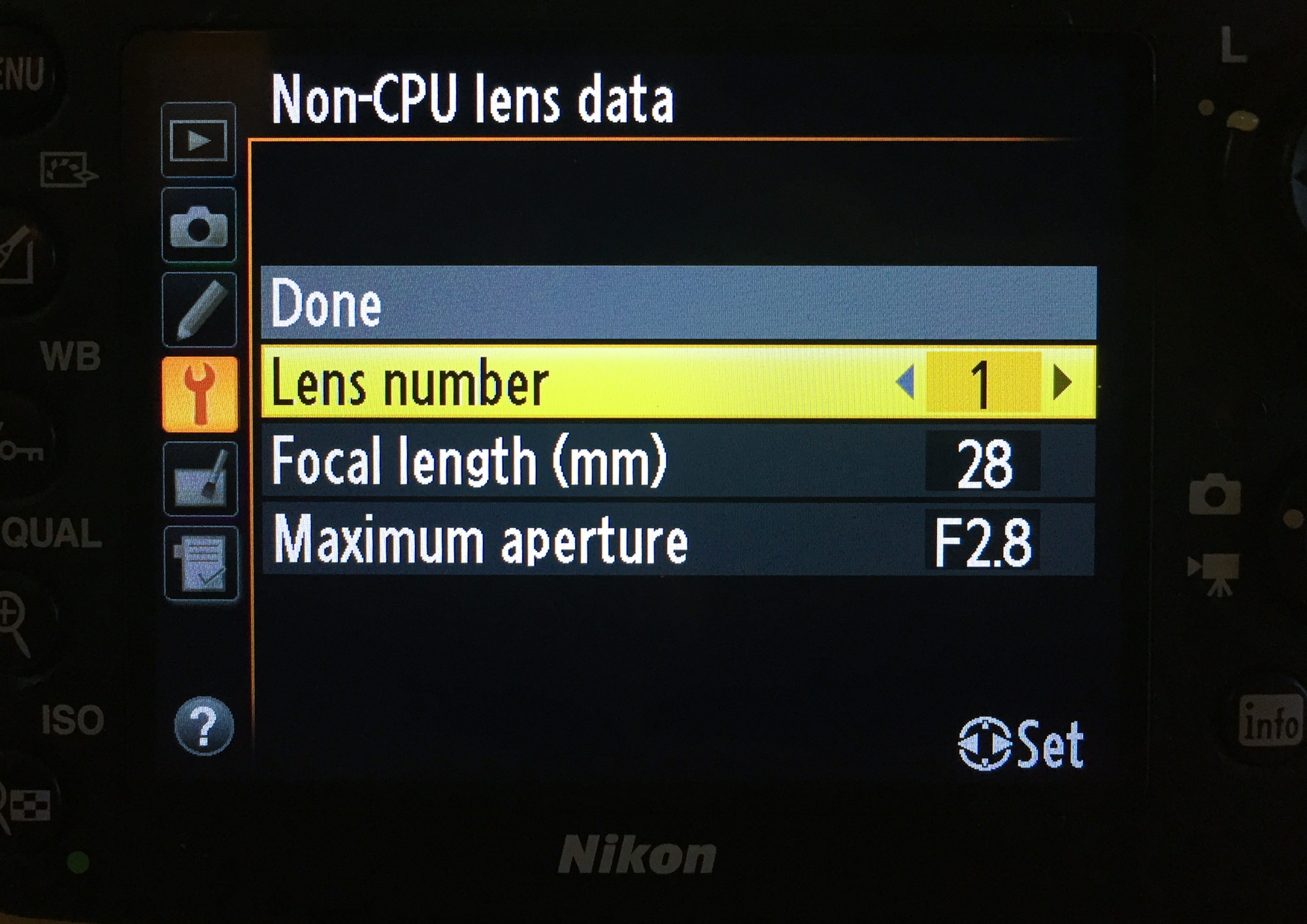 Go to Done, and that’s precisely where you’ll find yourself. Now, you can go ahead and program all the other lenses you want by repeating these steps for each.

A little note here is that my 70-210 is a strange beast, and within the Non-CPU Lens Data menu, I’m not able to actually select 210mm, so I chose 200mm instead as it’s the closest option. I’ve found that that lens minutely underexposes but compensating for about .3 tends to be just perfect. It’s unlikely you’ll run into this problem with your lens, so I wouldn’t worry; even if you’ve got something like the 58mm, the system has you covered. Actually, if you’re programming a lower focal length like 21mm, then probably go with the nearest higher option. 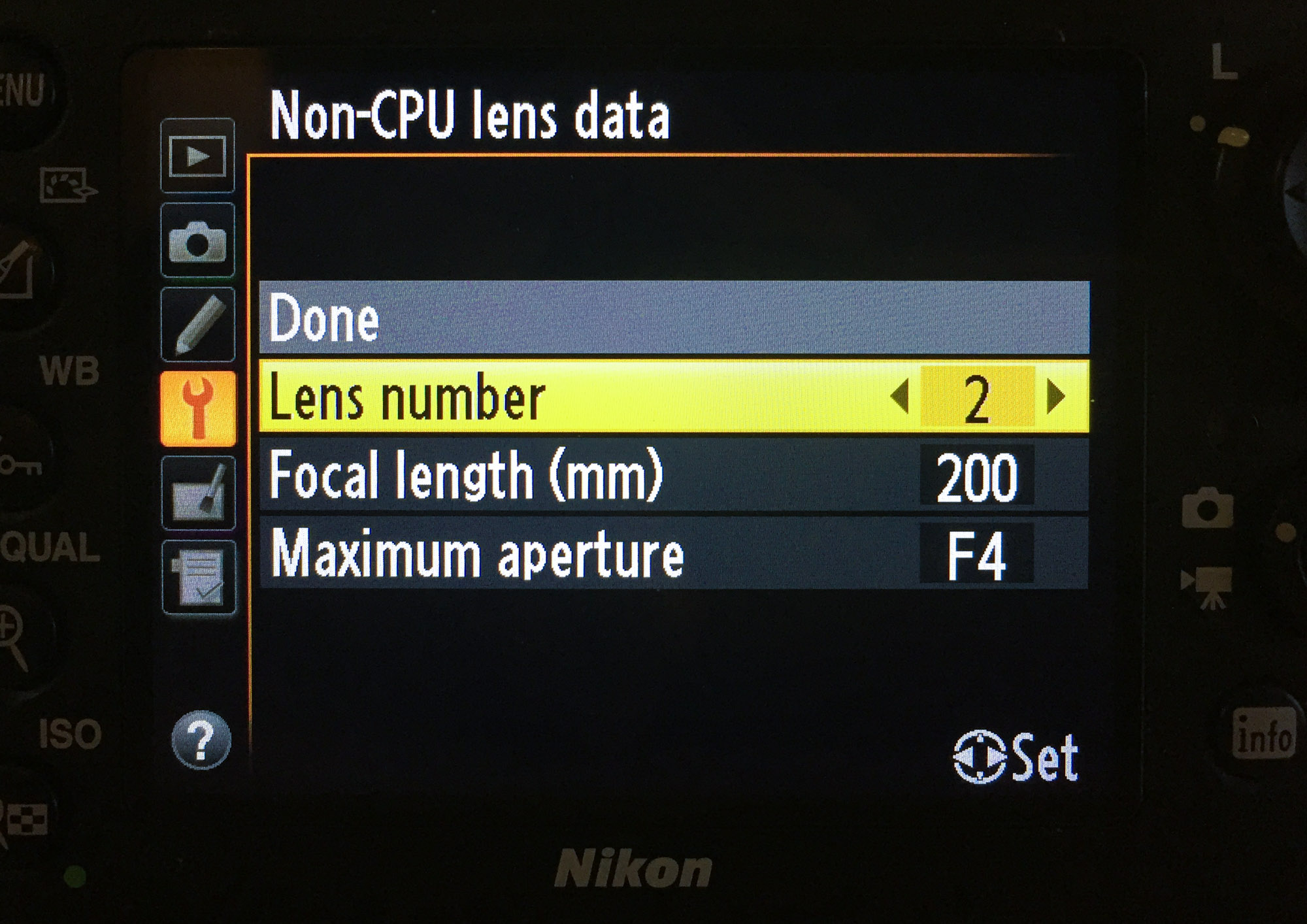 The only slightly annoying thing about using these lenses is the fact that your camera will not know which lens you’re using unless you directly tell it – each time you put the lens on. So if you’re shooting with, say everyone’s favorite 70-200mm f/2.8 VRII, and then switch to a Non-CPU lens, you have to go into the Non-CPU Lens Data menu and select that particular lens. Honestly, it takes but a moment so shouldn’t bother you. Keep in mind too, that if you use this method, you understand your camera body will not be able to manipulate the lens aperture for you, thus, only Manual and Aperture Priority shooting modes can be used. 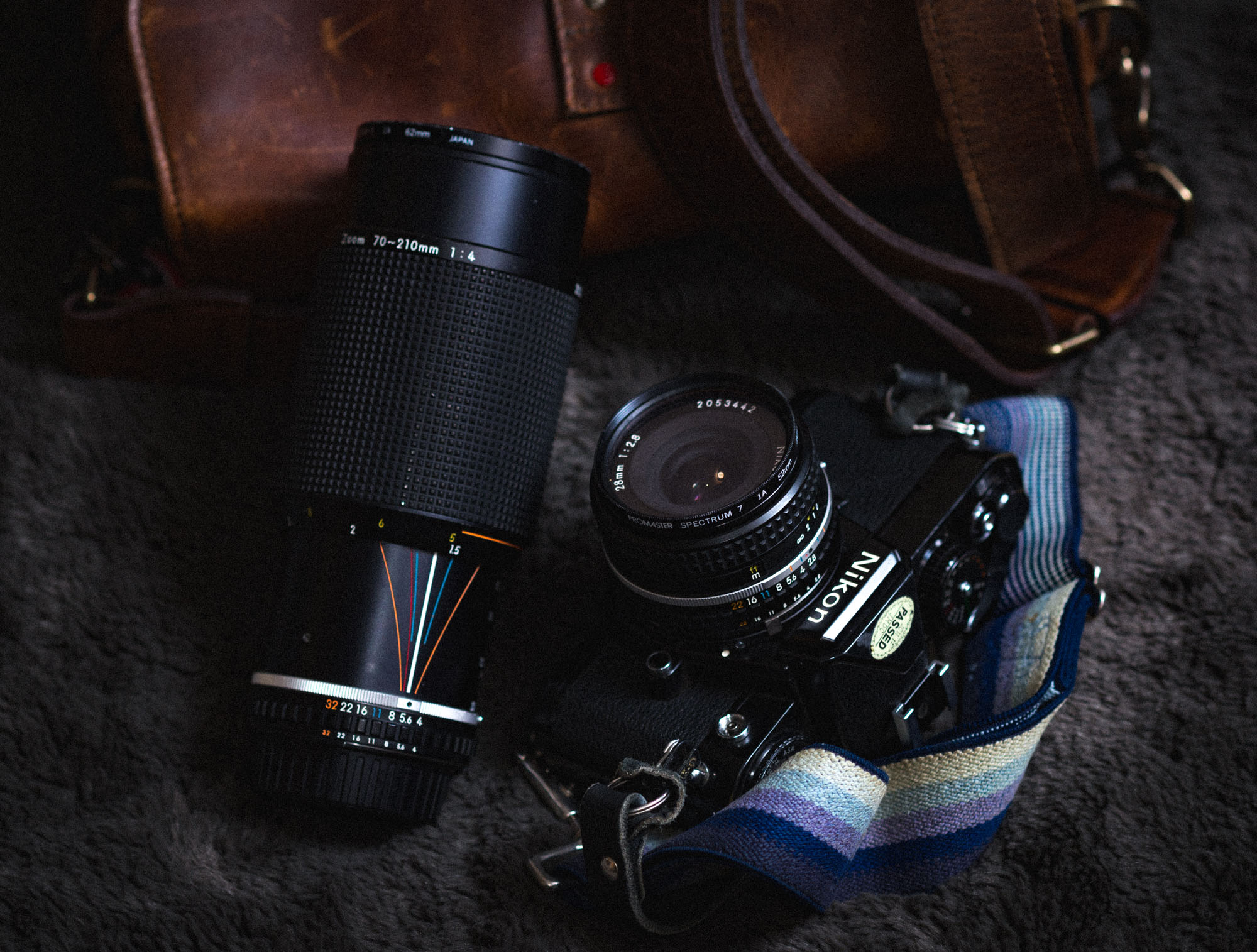 [REWIND: How To Move Images From One Lightroom Catalogue To Another]

In regards to metering, having used this Non-CPU function on a D750 and D610, the metering was (pardon the pun), spot on. Using spot metering particularly resulted in ‘just right’ metering.

Getting EXIF Data From Old Lenses

While many of us don’t mind and even embrace using manual lenses, a downside particularly for older glass, is they often don’t have any electronic way to communicate with the camera, which means upon import you’d be bereft of EXIF data.

Why does that matter? Well, that depends on the individual, but EXIF data can be used to study your images to get a sense of the settings you use and how maybe you should adjust, or even to let Lightroom analyze and help you to see what lenses you use and which you don’t, which in turn helps when travel or shoot planning. In addition it helps in overall sorting and if you upload to online platforms like 500px it helps with sorting. But there is a way to do it, and it’s simply by using a free plugin.

It’s called LensTagger Lightroom Plugin, and it is very quick to install and have up and running,

“LensTagger is a Lightroom plugin that adds EXIF data to photos directly out of Lightroom. Wether you are shooting with legacy lenses on Micro Four Thirds, or want to properly tag your pictures shot with an analog camera, LensTagger will give you the possibility that Lightroom is missing since 6 Versions.”

Essentially all you do is download, install, select the images you want to have the EXIF for, and then select in LR to attach metadata to file. Photographer Micael Widell has made a breakdown video that shows you step-by-step how to use the plugin, and you can find that at the foot of the article.

*LensTagger is a free plugin, so I’m sure any donation amount would be appreciated

I hope you found this interesting, and maybe even practically applicable. Perhaps it’ll allow you to use some fantastic glass you haven’t been able to in ages, or now you can shop some older, less expensive, but still immaculate lenses still on the market. I typically use the Nikkor 70-210 F/4 and Nikkor 28mm f/2.8, which both still allow me to produce lovely images. You can see a few casual ones below: 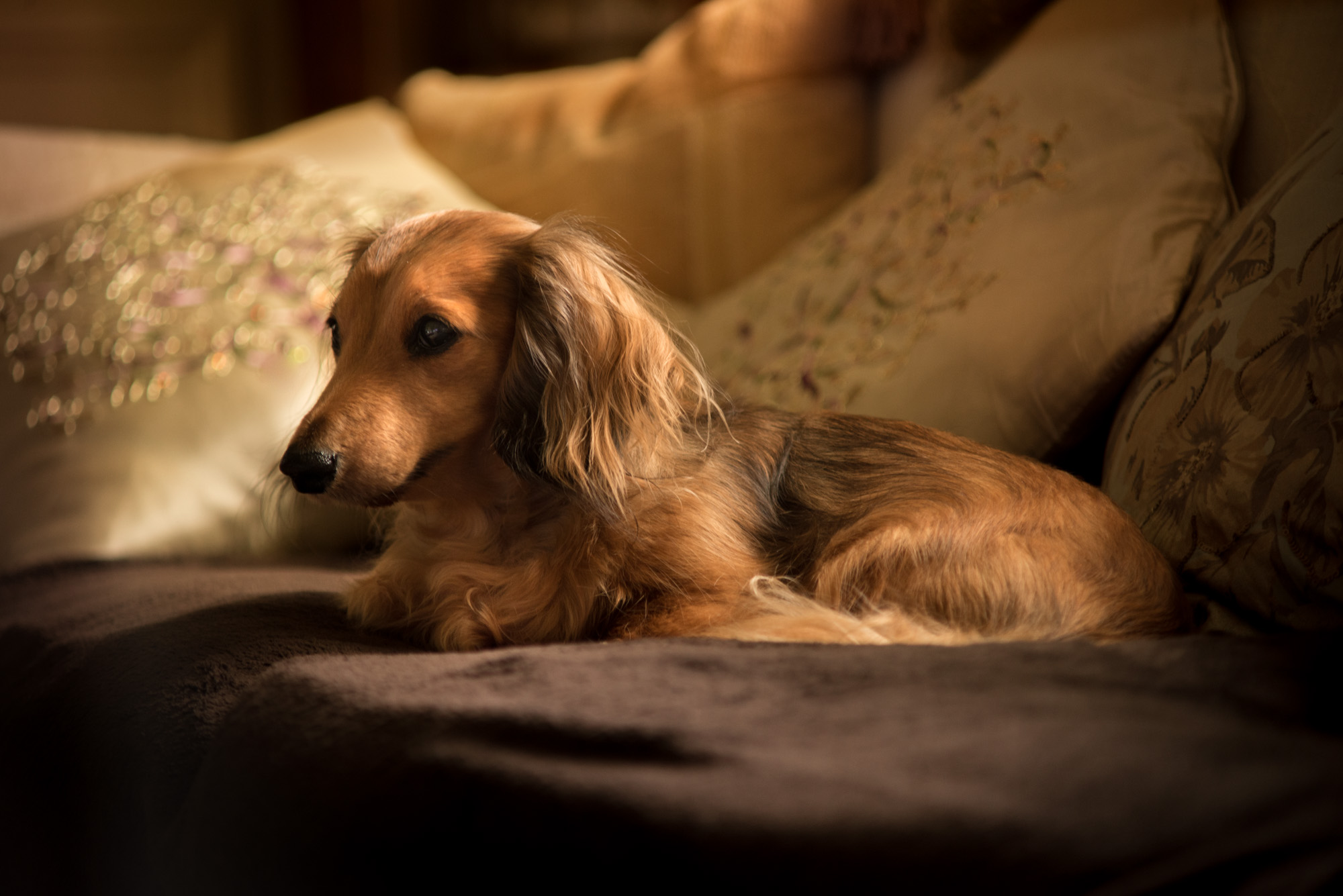 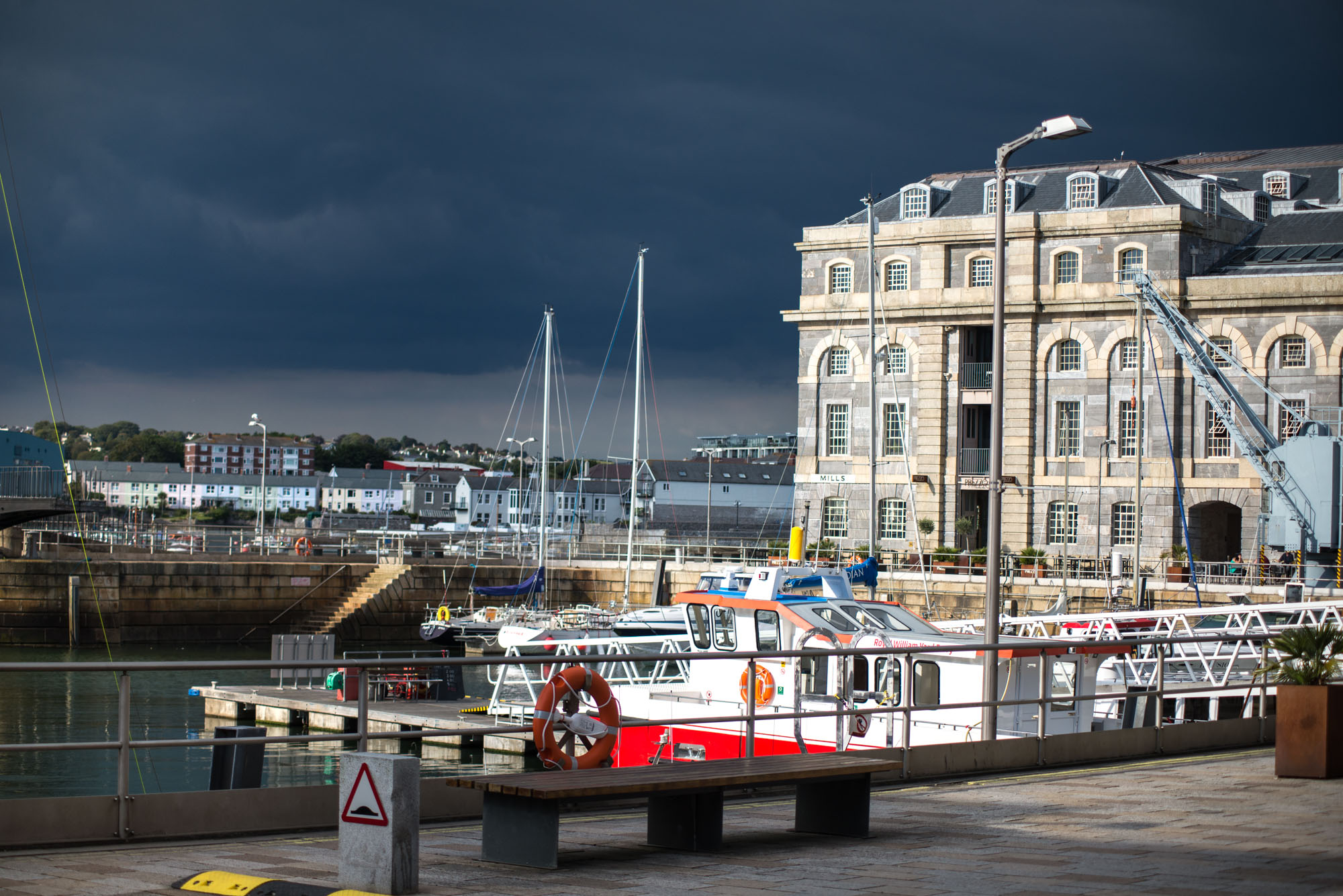 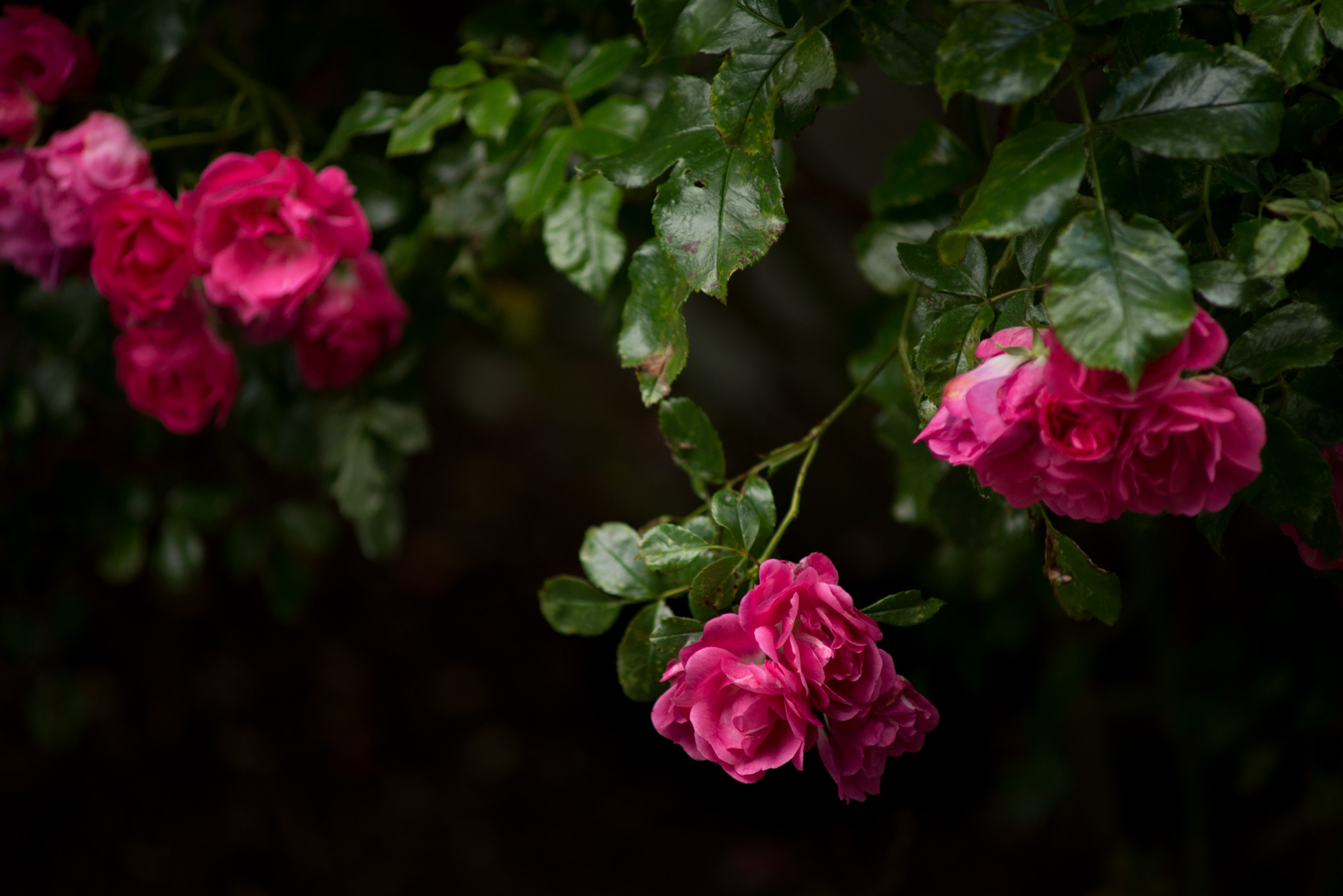 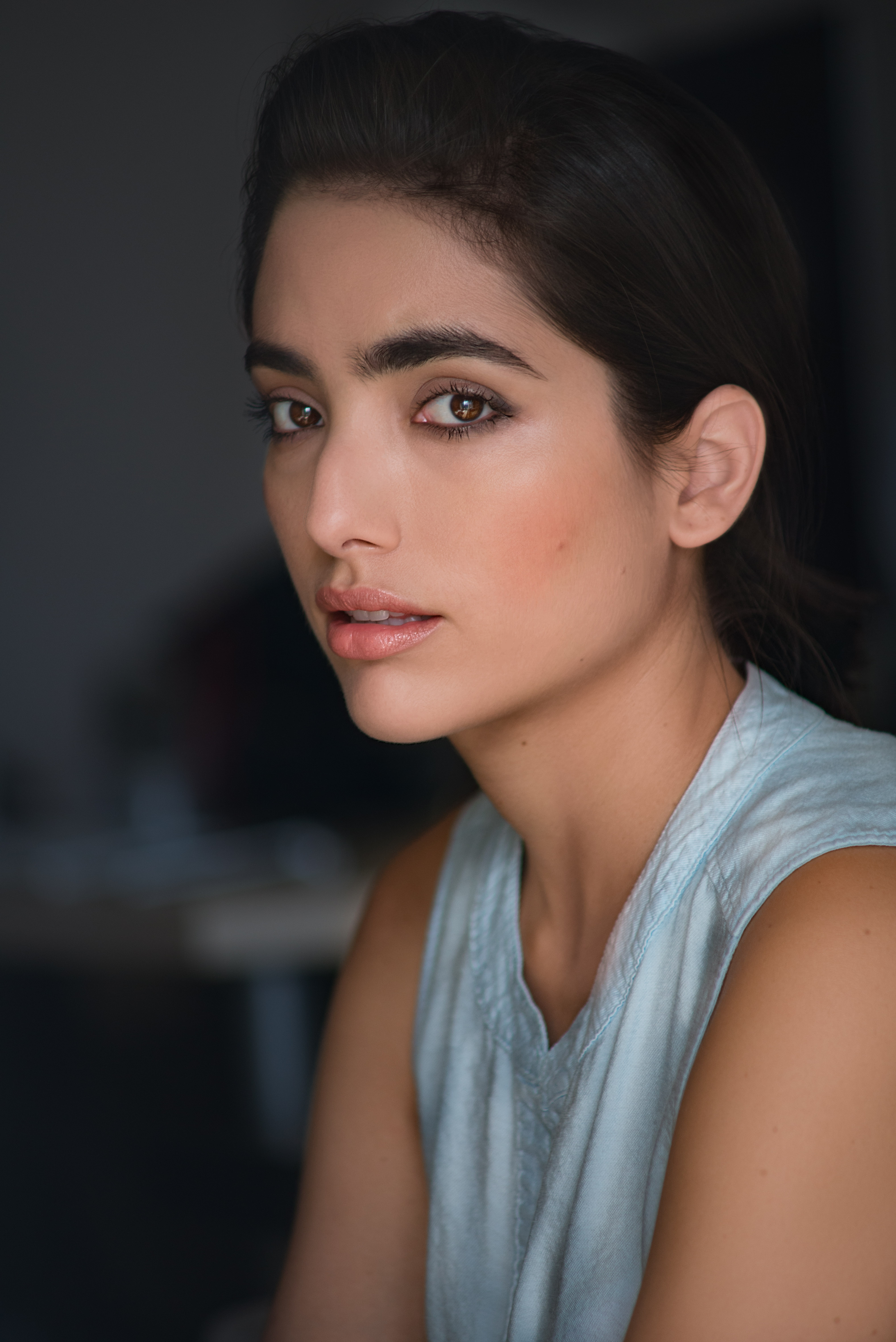 *A version of this post was originally published in Jan 2016

Art, Sex, and Women | Is Bella & GiGi Hadid's Nude Vogue Shoot Beautiful, Disgusting, Or Something Else?