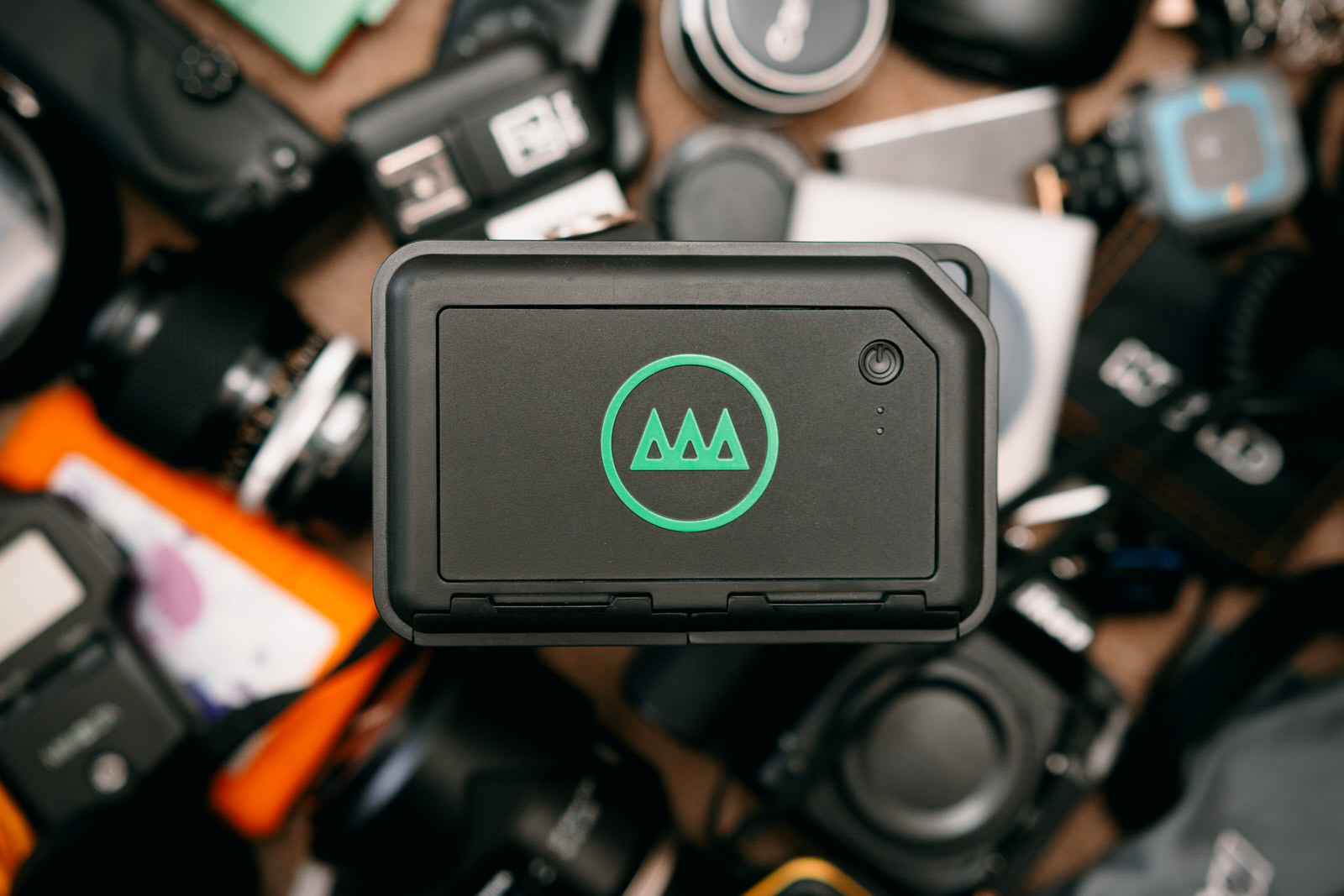 Despite Kickstarter’s best efforts, supporters still think of the service as another Amazon where they buy a product that doesn’t exist yet. What Kickstarter is, in reality, is a belief system where if a backer believes in a project they help cover the production costs in hopes that the product will come to fruition. Back in 2015 close to 3,000 backers raised over half a million dollars in a project they believed in, the Gnarbox. Much like other Kickstarter projects, the Gnarbox suffered delays in production, but after two years of reaching their intended goal, the product has finally come to the masses. 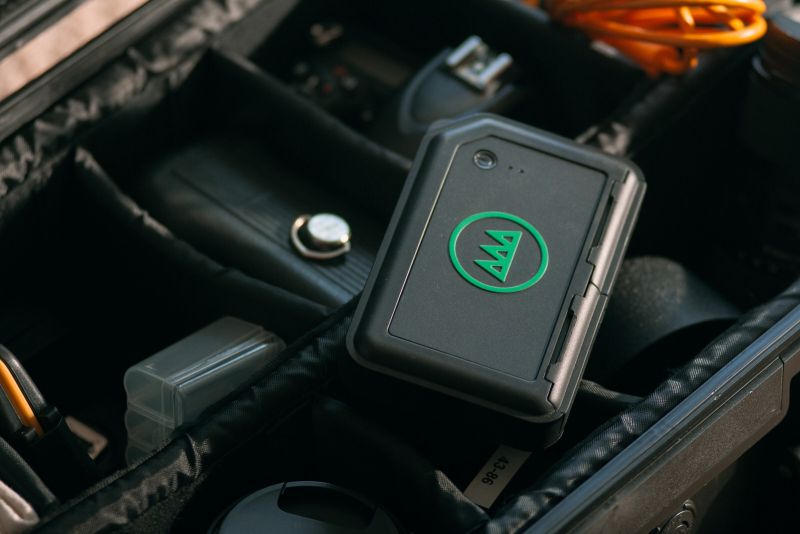 Visually, Gnarbox looks like a ruggedized hard drive similar to the ones you can get from the likes of G-Tech or LaCie. At 5.3 x 3.4 x 1in it is only slightly thicker than the LaCie Rugged Mini, but instead of a spinning drive, Gnarbox has an integrated 1.92 GHz Intel Quad Core, 2 GB of RAM, 128 GB flash-based SSD, WIFI and a 4000mAh battery that is estimated at 4-6 hours. A large rubberized coating covers the internal metal skeleton, which in turn protects the internals it from being crushed and acts as the heatsink for the Atom-based CPU – the CPU tends to get uncomfortably warm under long sessions.

Two well-secured doors cover a plethora of ports including a full-size USB 3.0, full-sized and micro SD slots and a charging port which doubles as data transfer to a host computer. When the doors are closed, the device is water resistant and dustproof. Coming in at close to 1 lb the Gnarbox feels like a premium product in hand. As for the companion app? A little less so. 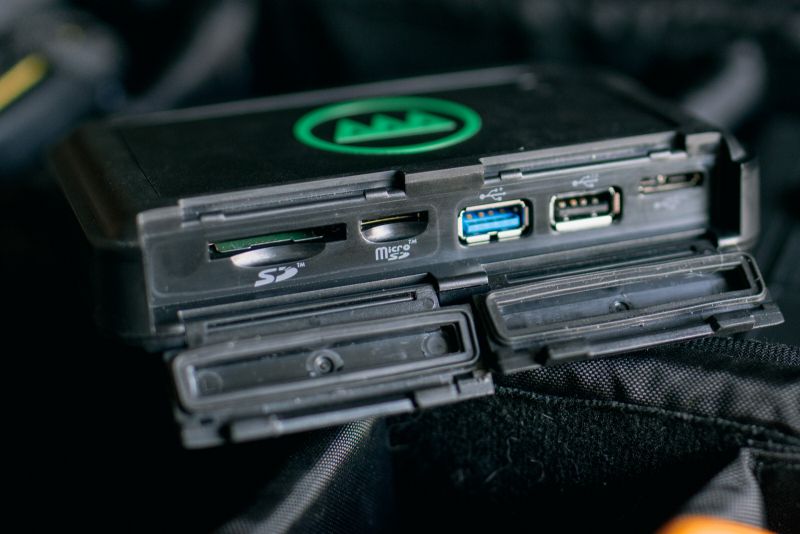 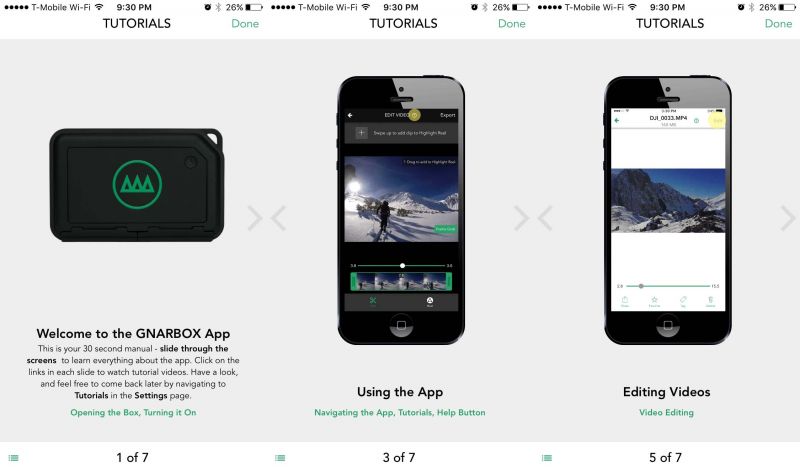 When opening the application you are greeted with a digital representation of a printed pamphlet, a “how-to” on using your newly purchased mobile editor. Once you thumb through the multiple pages you are faced with a bare interface with links to your files, connected devices, recently imported, favorites, and a highlight reel. 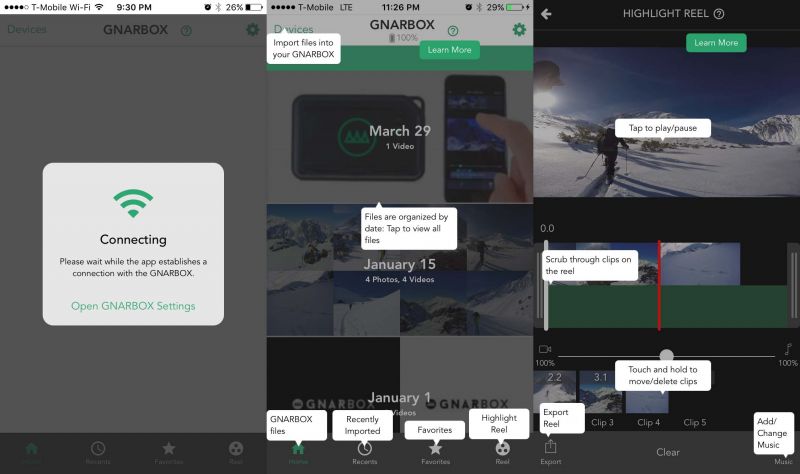 The video editor is even more barren than the main screen, requiring the use of gestures, swipes, and taps that can be difficult to master. As of the photo editor, it looks like a very rudimentary version of Snapseed, with features such as exposure, highlights, shadows, and contrast controlled with sliders. Gestures and sliders are really a non-issue, as anyone who has used to a mobile device after 2007 knows it’s the current state of things. What is really the kicker is that lag between input commands.

Despite having a quad-core processor and a dedicated GPU, working with RAW files does come with some lag time. Tapping on a video or photo will bring up a viewer which streams the media from the device since no media is available locally on your iOS device or Android. Thumbnails take a few seconds to fully generate, and a full-screen preview takes up to a minute to go from pixelated to sharp. A minute is significant. 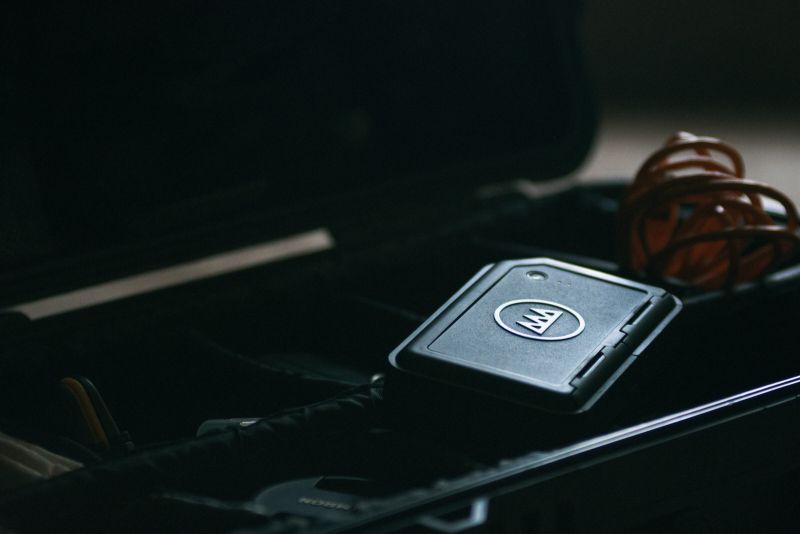 When editing Nikon NEF files from my D7200 there would be a significant delay from when I would see the low-res preview image to the full resolution image, like up to ten seconds per image. This comes down to the slow storage and weak processor that resided in the steel frame of the Gnarbox.

For a frame of reference think of the included 128GB SSD inside the Gnarbox as less a Samsung Evo and more a giant thumbrive. When transferring 950 RAW images (around 30GB worth) that I took from a recent wedding, it took the Gnarbox 27 minutes to transfer them to its internal storage. In comparison, I was able to transfer the same images in 6 minutes to a spinning disc hard drive circa 2011. 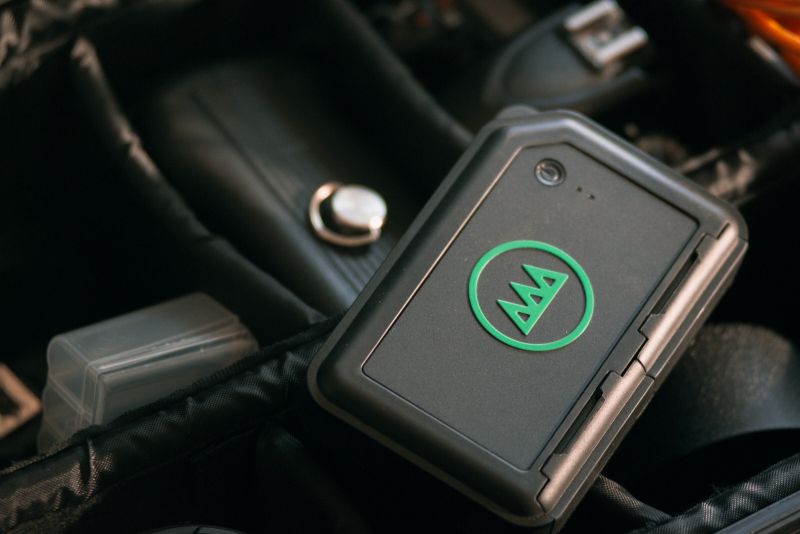 Before I was able to transfer the images, the Gnarbox had to index them for its file system. The whole process takes a few mins, totaling around 5 minutes for the same 950 images. In the same time, however, I was able to connect my D750 to my phone transfer the images I wanted, touch it up in Lightroom Mobile and print in on the Instax SP-1. The 5-minute wait would be more palatable if the software did not require 2 ½ minutes re-indexing every time the SD card was inserted. 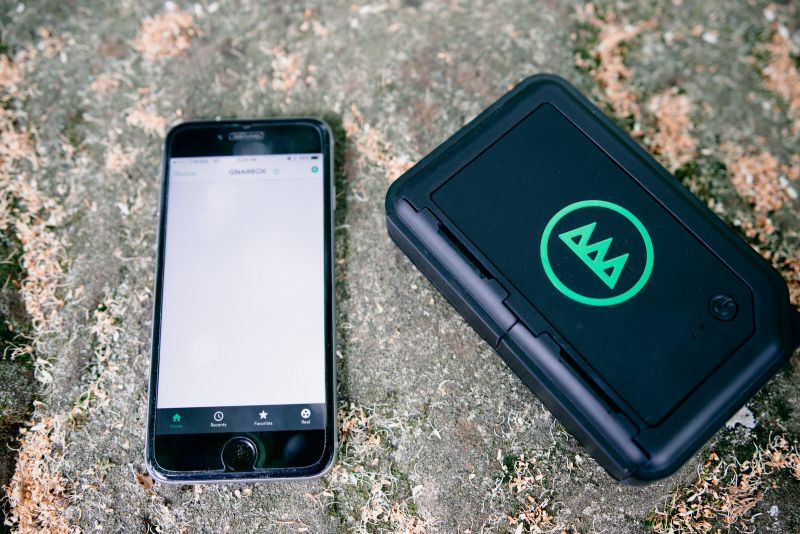 At the heart of the Gnarbox resides a powerful Intel Quad Core CPU with an equally powerful graphics card, or at least that is what the marketing material says. The chip inside isn’t the fancy Kaby Lake i7 with Intel HD 630 graphics nor is it an i5, instead, it is akin the x5-Z8300 series of Atom processors (based on the specs).

The Gnarbox’s main selling point is that it is able to edit RAW photos and 4K videos better than the device in your pocket can. To test the raw performance of the processor I used Geekbench’s database, a universal benchmarking software.

Gnarbox has a bit of an identity crisis. The little wonder box tries to be both a backup solution in the field while providing a yet another way to edit our photos and videos. Both suffer. 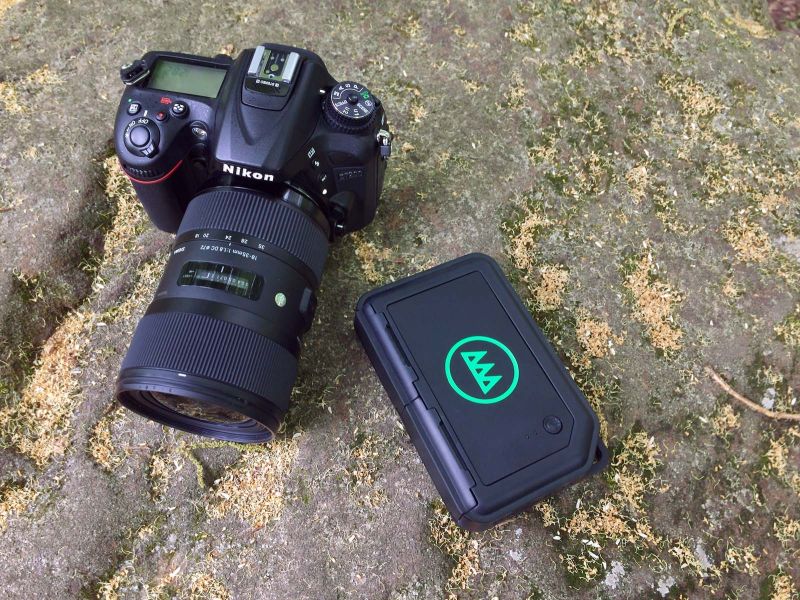 Coming in only a 128 GB model, Gnarbox retails at $300. The only option for adding more storage is by utilizing the USB port with a second hard drive. For around the same cost, you could purchase the WD 4TB My Passport Wireless Pro and an Apple Lightning to SD Card Reader/ OTG Cable, retaining the ‘same’ functionality at the Gnarbox with 30x more storage.

When looking at the marketing the Gnarbox is more geared to the iOS user, as Android devices routinely have a micro SD card slot that can be used to quickly view footage from a GoPro or DJI Mavic if need be.

Driven by a sea of likes and shares, the constant tether we have in our pockets is a reminder that social media has pushed the ever increasing need of visual imagery. Devices like the Gnarbox fuel this fire.

The Gnarbox has followed a common trajectory of crowdfunding projects, suffering delays in production and releasing a finished product that was, in my opinion, half-baked for pro use. After over 11 updates and a handful firmware updates, little has changed. If the team over at GNAR Inc could open up their API to other software companies, they may have a shot, otherwise, it would seem the Gnarbox as it stands is years too late. 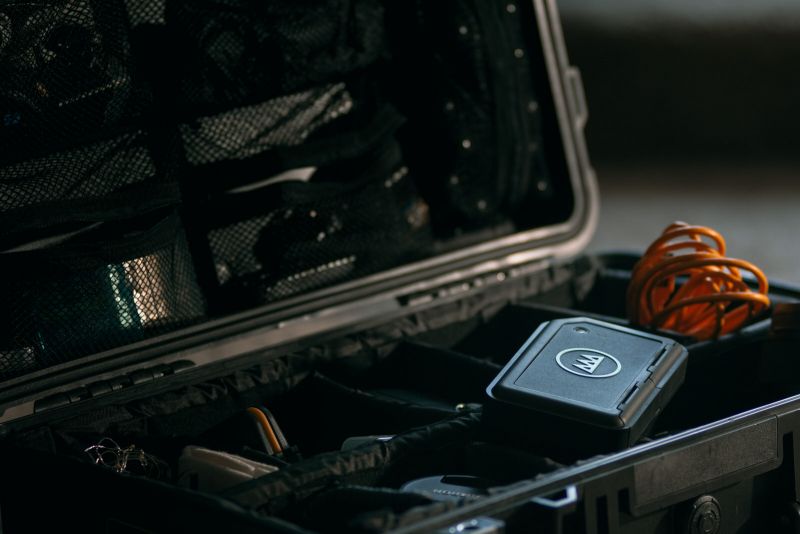