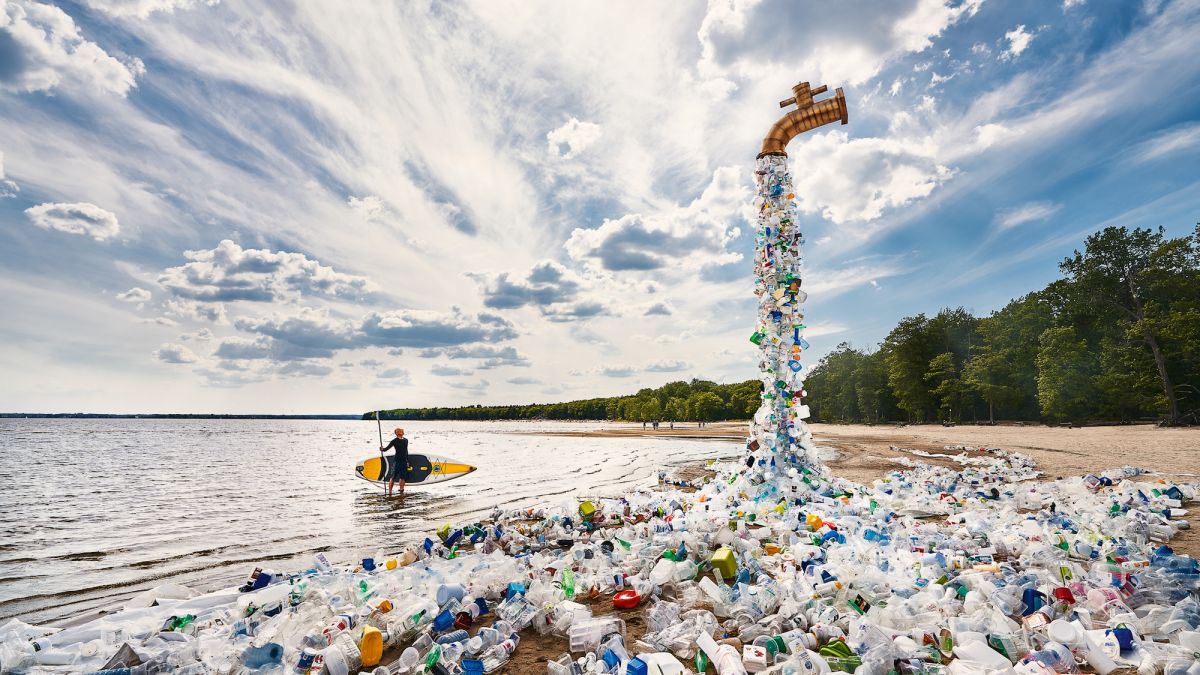 Artist and activist, Benjamin Von Wong, is back with another environmentally-minded project,  Giant Plastic Tap, to bring attention to the global issue of plastic pollution. In an effort to inspire change and slow the production of single-use plastic, which has seen an increase of 250-300% consumption since the start of the pandemic, Von Wong teamed up with the Embassy of Canada in France and invited creatives to remix images of a giant tap art installation in Photoshop.

Those who participate are automatically entered for a chance to win $10,000 in prizes, which includes an SLR Lounge Lifetime Premium Membership.

About the Giant Plastic Tap

In similar fashion to his past projects (including Plastikophobia, Strawpocalypse, and another on Ocean Pollution), Von Wong has combined form and function to create compelling art installations with a cause. This time around, Von Wong built a three-story tall tap that appears to leaking plastic into the environment to bring attention to single-use plastic consumption. It’s a visual metaphor that instantly communicates the dire effects of the plastic pollution.

To build the tap, Von Wong and his team used relevant items that were bound for the landfill, including over 200 pounds of ventilation duct for the faucet, a mountain of plastics (cleaning bottles, boat wraps, and more), and a rope made from 100 plastic bottles to tie it all together. Because of how they constructed the faucet and plastic “water,” tying the bottles together and hoisting the installation on a readily available forklift, Von Wong was able to set up and take down the installation several times for reuse in different locations.

The initial process for putting the installation together proved tedious and time consuming, but hundreds of volunteers contributed thousands of hours to make this project a reality.

Bringing in the Creatives

Armed with creative talent and a catchy hashtag (#TurnOffThePlasticTap), artists from around the world have already begun using their skills to bring attention to the cause.

Here’s a quick look at more images created for and inspired by this project.

How to Participate and Enter to Win

If you would like to participate in the challenge and remix the images of the Giant Plastic Tap, you can find direct instructions here. You have until November 4th to submit your work. When you do, you’ll automatically be entered into a $10,000 prize pool!

Feel free to refer to the incredible body of work that other artists have already created for inspiration, which you can find more of near the bottom of this blog entry on Von Wong’s site.

How to Prepare Photos for Printing | Retouching Tips and More