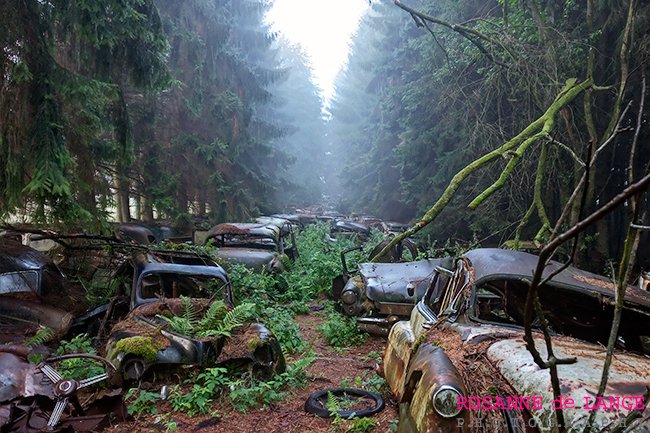 In the middle of a small forest near Chatillon, a little village in Southern Belgium, lies a scene straight out of  The Walking Dead. Rows of decaying cars that have been overtaken by nature have been sitting there rusting for the last 70 years. These abandoned cars were left behind and forgotten by U.S. soldiers from WWII who were stationed in that region. After the war, all military personnel were sent back to the states but it was too costly to ship the cars back home as well. So they drove up this little hill and parked their cars, hidden from view.

As many as 500 cars in 4 different graveyards were littered around the small village, but only this one remained. Soon other people began leaving their cars on the little hill as well and it became a car graveyard of sorts. It was a favorite among Urbex photographers looking for an eerie and interesting piece of history to document. Left to the mercy of the elements, the rusty textures coupled with bits of moss covering created a striking contrast and a backdrop for a perfect spooky story. Alas, the area was cleared a few years ago, due to environmental issues, but the monument lives on in the photographs of the Urbex photographers that immortalized it forever with their cameras.

Urbex photography is stands for “Urban Exploration,” and includes photographers who go on adventures to oft abandoned places or places generally closed to the public. They’ve adopted the motto of cave explorers and hikers, “Take nothing but pictures. Leave nothing but footprints. Kill nothing but time.” Urbex has been popular for quite some time and has recently gained much popularity in the photography community.

Photographers Rosanne de Lange and Marcel Wiegerinck share with us their images from the Chatillon Car Graveyard.

CREDITS: Photographs by Rosanne de Lange and Marcel Wiegerinck are copyrighted and have been used with permission for SLR Lounge. Do not copy, modify or re-post this article or images without express permission from SLR Lounge and the artist. [Via Bored Panda]