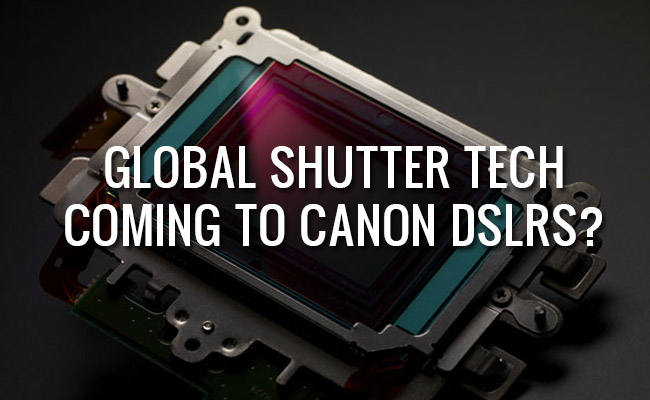 For as long as there has been DSLR video, there has been the issue of rolling shutter. You know, that odd effect where the video gets all wobbly and bendy if you pan too fast one way or the other. It has become sort of an accepted drawback of using DSLRs for video, but it appears that Canon may be looking to change that…

According to the latest from the Canon rumor mill, Canon may be releasing a yet-to-be-named DSLR that will feature global shutter technology. An advancement that would mean no more rolling shutter for shooters of this camera.

[REWIND: What Canon DSLR Will Be Announced Next Month?]

Global Shutter – or Electronic Shutter, as you may know it – technology is different from the standard tech used in today’s DSLRs. Put simply, when in live view, the camera’s physical shutter would not move, and the sensor would capture the scenes 24 times every second to create the video. A standard DSLR camera still uses the physical shutter in live view, so the sensor must scan up with the shutter, which is what causes the rolling shutter effect.

The reason global shutters have not been implemented already is that they are very expensive to implement, not only on the sensor level, but also in the rest of the camera hardware required to make it work. A global shutter requires the camera to process large amounts of data at once, in a small period of time. So the tech surrounding the sensor needs to be beefed up to handle the extra load.

[PRODUCT HIGHLIGHT: Create Stunning HDR Imagery with the help of our HDR Workshop]

If this rumor is indeed true, it would likely send shock waves throughout the DSLR and indie video world. It would remove one of the biggest drawbacks of shooting video with a DSLR, and make them much more attractive for video shooters. But, as with all rumors – especially loose ones such as this, it is important to remember that nothing is official until it is announced by the company.

What to Expect When You're an Expecting Photographer - The Ultimate Guide Part 1: Pregnancy Through Delivery

Understanding your EOS camera: Get Creative with Aperture Priority