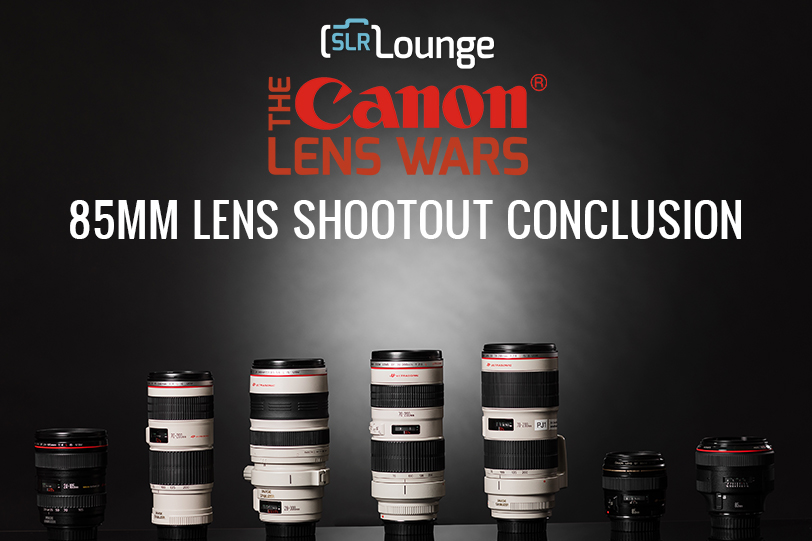 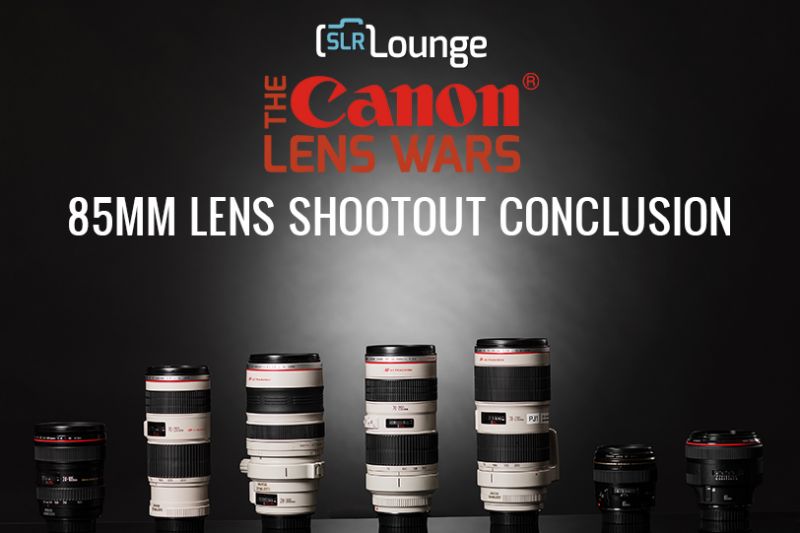 Welcome to Part 3 of the final part of the Canon 85mm focal range of the SLR Lounge Canon Lens Wars series. Since we had 7 lenses in this grouping, in part 1 we compared the two 85mm Canon primes while in part 2 we compared the 5 different Canon zoom lenses that cover the 85mm focal length.

Let’s start from the top with their aesthetic bokeh quality and sharpness at their respective Wide Open Apertures (WOA). Once again, this is a visual test of differences, not a technical test. So, we are trying to distinguish differences in appearance while viewing images full screen on a Dell U2713HM 27″ IPS monitor.

Just by viewing the full-size images below, it is very easy to distinguish which image is which. The Canon 85mm f/1.2L clearly stands out in terms of its bokeh.

In the zoomed in images below, I can see that the 85mm 1.2 at its WOA of f/1.2 simply has a beautiful creamy look to the bokeh that is unmatched by the other 3 Canon lenses. 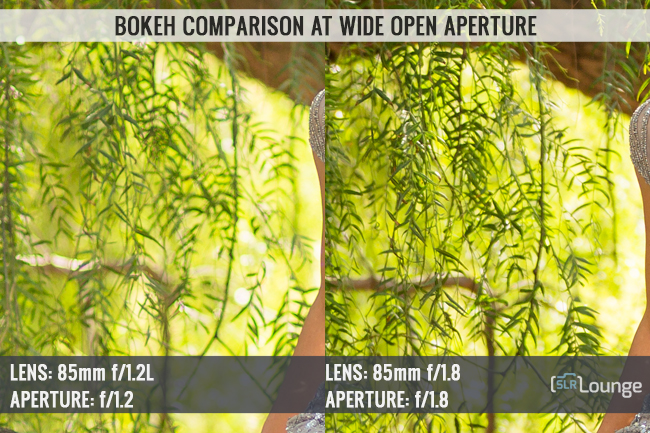 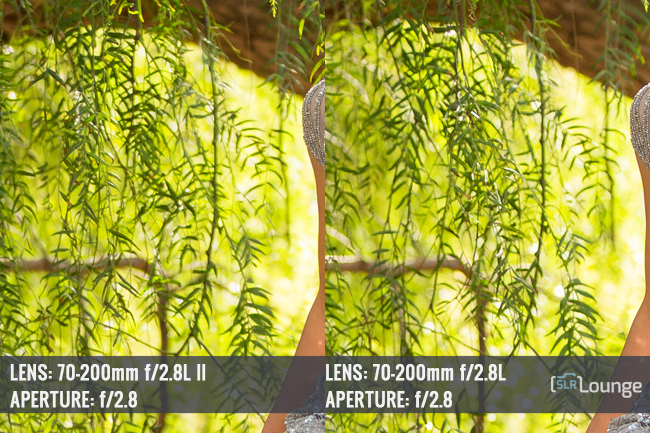 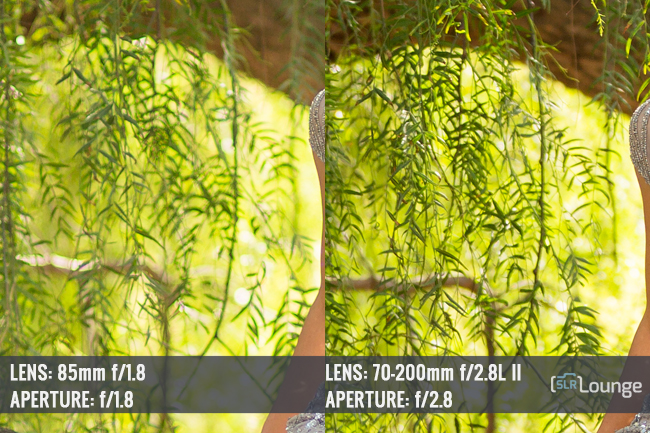 In fact, as you may have read in our Canon zoom lenses comparison at the 85mm length, the 70-200 f/2.8L IS Mark II and the standard 70-200 f/2.8L without IS produced images that are extremely similar in all respects. The only factor between the two 70-200s is the Image Stabilization found on the 70-200 f/2.8L II and its subsequent higher cost.

You can see in the images below that these two lenses are evenly matched.

Therefore, for the purpose of this shootout, we will just compare the two 85mm Canon primes to the Canon 70-200mm f/2.8L II to keep things simple.

Now when it comes to comparing sharpness, contrast, and color at wide open aperture, the Canon 85mm f/1.2 is only slightly softer compared to the 70-200 zoom lenses. Nevertheless, the cropped image we see below shows that the 85mm 1.2 is still pretty sharp and has good contrast, especially considering that this 85mm prime has a very large aperture of f/1.2. 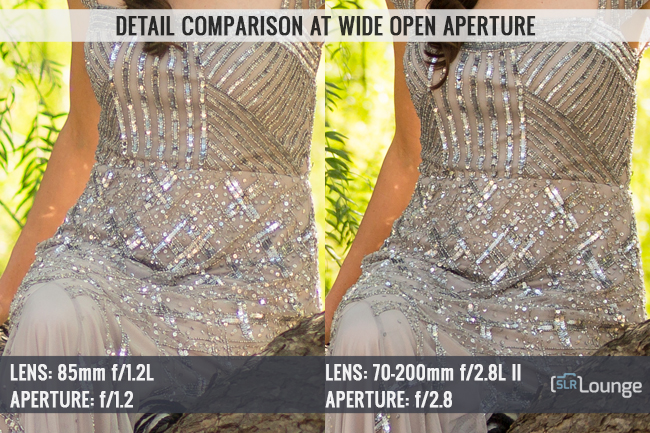 The Canon 85mm 1.8, on the other hand, does not quite have the same pop as the 85mm 1.2 and the 70-200 zooms. As shown below, the image that it creates is softer and less contrasty compared to the other lenses in this group. 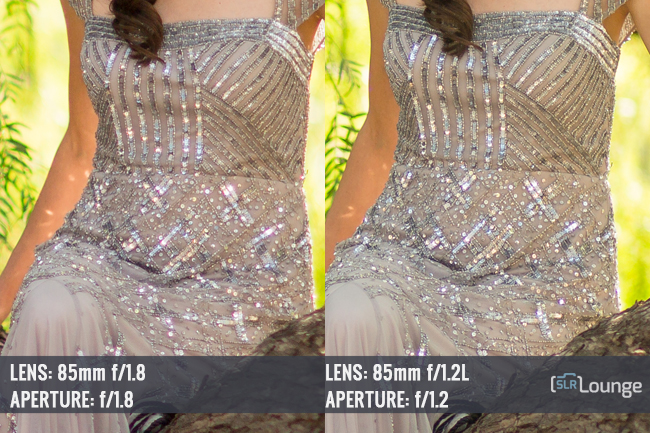 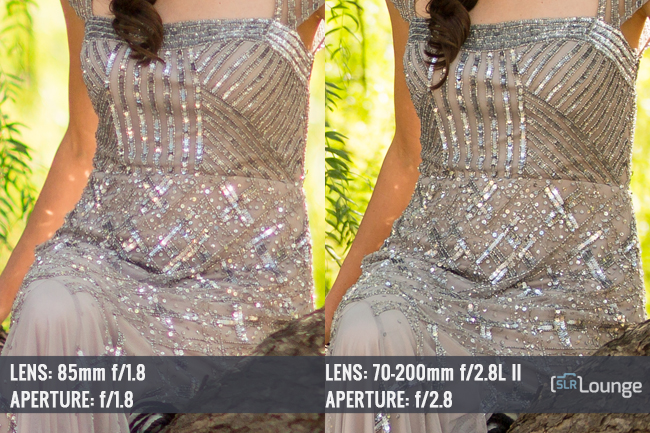 Ok, so that we see the aesthetic differences at their WOAs, let’s go ahead and come up to their Widest Common Aperture (WCA) of f/2.8 and compare the lenses for sharpness and aesthetics.

While the amount and aesthetics of the bokeh looks visually similar for all four lenses at their WCA of f/2.8, if we zoom in, we can see that the shape and the blend of the bokeh is just a bit softer and more creamy on the 85mm 1.2L than the 70-200mm. 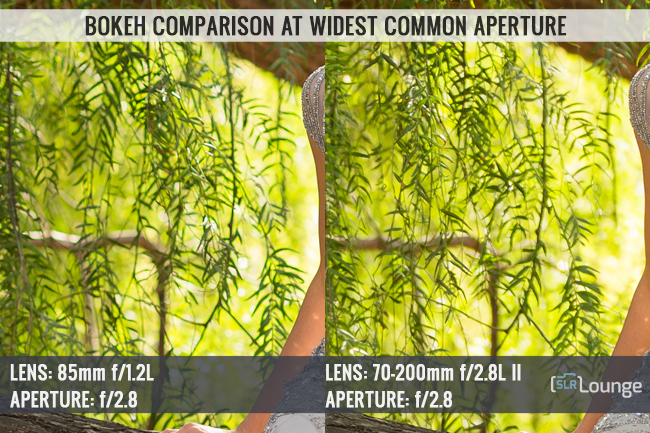 The 70-200mm zooms appears to have slightly more distinct and high contrast shapes in the bokeh, while the 85mm 1.8 appears to be just a bit softer which we can see by moving towards the left of the frame over the leaves. 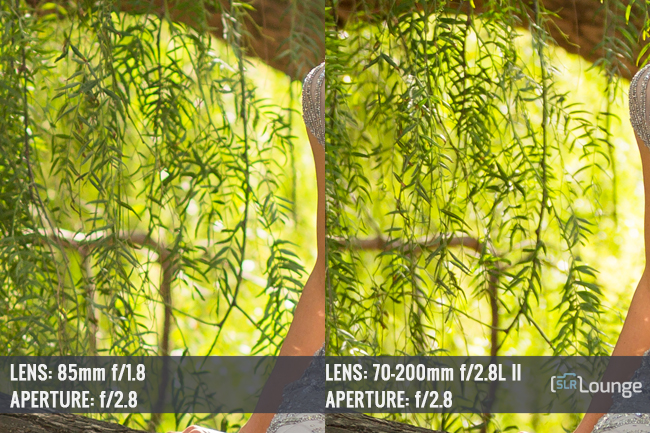 So looking at the comparison above, neither image is necessarily better than the other, and it is going to be a subjective preference. However, I do prefer the slightly stronger and more pronounced look in the bokeh of the 70-200mm f2.8. Either way, it is tough to distinguish when you are not pixel peeping.

Just like at wide open aperture, both the Canon 70-200mm 2.8L II and the Canon 85mm 1.2L create better color rendition and contrast than the 85mm 1.8. But that is to be expected with the L series lenses compared to regular glass. 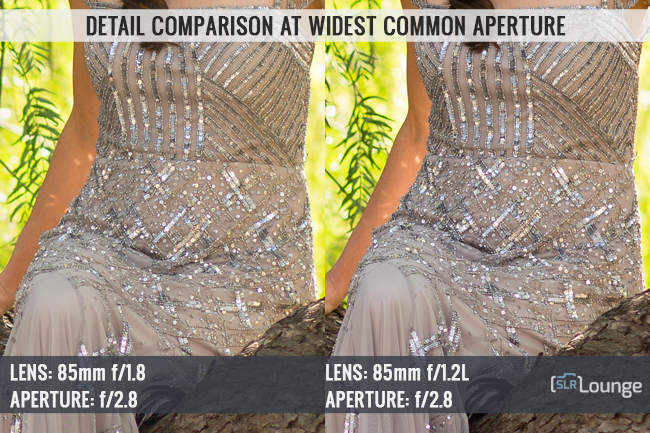 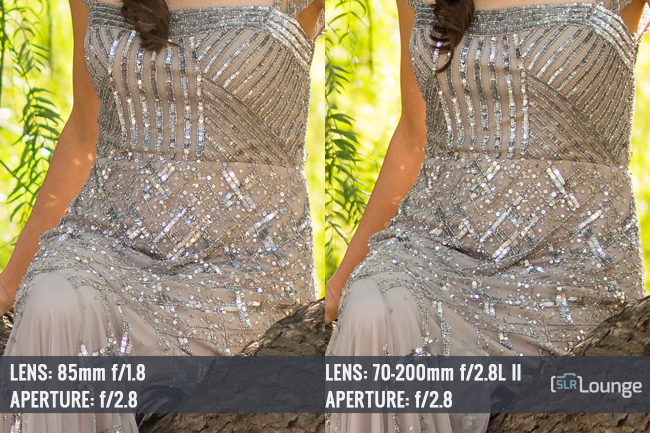 Now, when we compare the 70-200mm zooms and the 85mm 1.2 side-by-side, the difference in sharpness is relatively tough to see.

It appears that at their WCA of f/2.8, the Canon 85mm 1.2L is ever so slightly sharper than the 70-200mm zooms, which can be seen over our models dress sequins. 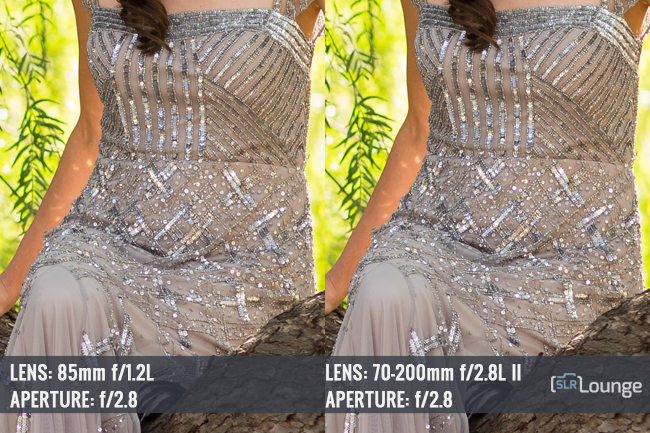 Extending out to the right edge of the frame, 85mm 1.2L further separates itself in terms of sharpness when compared to the other lenses in the group. 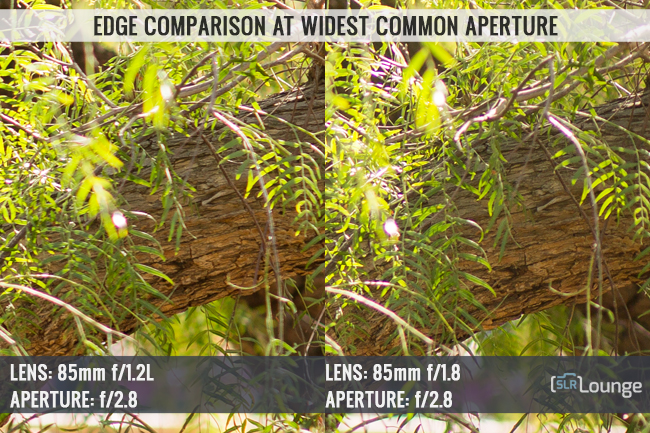 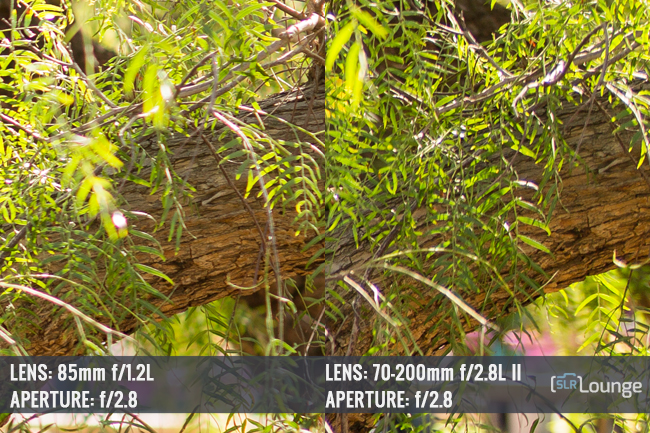 So for the first time in this series, it is tough to give you a solid conclusion of the best lens because of each of these four Canon lenses does something unique enough at various price points to make them worth owning.

So let’s take a look at the pros and cons for each Canon lens.

If you want the most aesthetically pleasing bokeh and just the most bokeh in general, then the Canon 85mm f/1.2L is the lens for you.

Even at such a wide open aperture, the 85mm f/1.2 still produces excellent overall sharpness and image quality, especially when compared to the standard 85mm 1.8 prime lens.

And of course, if you want the best low-light performer, the 85mm f/1.2 significantly allows more light because of its very large aperture of f/1.2. All of this performance does come at a hefty sum of $2,199. But, here is the thing, while this lens does give you a slightly better bokeh aesthetic and low light performance than its little brother, the 85mm 1.8 does 90% of what this lens can do for a fraction of the price!

Our Favorite Zoom Lens at the 85mm Focal Length

If you want telephoto functionality, good low light performance, beautiful bokeh, and the best overall sharpness and image quality for a telephoto lens, the clear choice would be the $2,499 Canon 70-200mm f/2.8L II.

And when you pair this lens with the 85mm f/1.2, you end up with two completely unique lenses that are both worth owning in your toolkit. The 85mm is going to give you amazing artistic imagery and unmatched low light performance, while the 70-200 is going to give you an awesome focal range, great low light capability, and the ability to create beautiful and unique artistic images via lens compression.

The Best Bang for the Buck at 85mm Focal Length

If you don’t have the $2,200 budget to step into the Canon 85mm f/1.2L, then the $419 Canon 85mm f/1.8 is going to give you 90% of the performance for only around a fraction of the price. In fact, I was so impressed by the performance of this lens that I can safely say this is a must have lens for those that can’t afford to step into the Canon 85mm 1.2L. Placed side by side, it was difficult to tell the difference between the 85mm 1.8 and the 85mm 1.2L without zooming in and pixel peeping.

Again, as long as you are ok with not having image stabilization, then you will get virtually the same image performance, the same low light functionality, and the same bokeh-liciousness that you can get with the 70-200mm f/2.8L Mark II.

Conclusion of the Canon 85mm Lenses

So all four of these Canon lenses are winners in the 85mm focal range, and personally I would choose two of them based on your budget.

But, if you are just starting out or are a little tight on cash, then the non-stabilized 70-200mm f/2.8L and the Canon 85mm f/1.8 will literally give you 90% of the image quality and functionality of the other two lenses for around $2,000.

Either way, all four of these lenses are incredible lenses within their respective price points. In particular, the 85mm 1.8!

The Final 39 Days: Devastating Photos of a Man's Battle With Cancer (GRAPHIC CONTENT)