SLR Lounge > Photography News > Note To All Major Brands: Just Because A Photo Is Online Doesn’t Mean It’s Up For Grabs 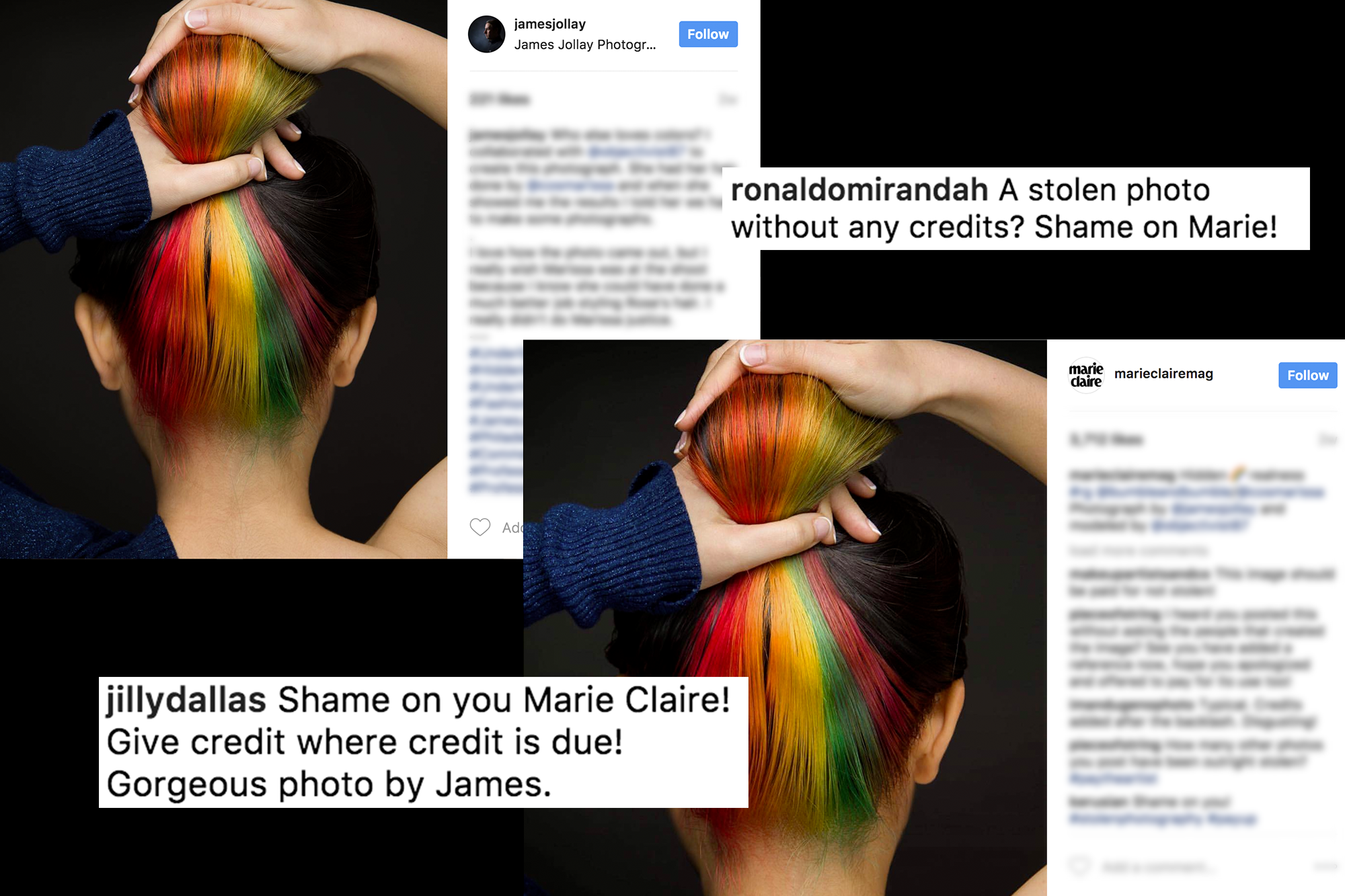 Note To All Major Brands: Just Because A Photo Is Online Doesn’t Mean It’s Up For Grabs

There are truly people out there who believe that if a photo on is on the internet, it’s up for grabs; that if you find a photo in a Google image search it’s public property. They will use these photos for their own projects without the owner’s permission and be sincerely confused when they’re called out on their behavior.

But sometimes, a photo is misused and you know the appropriator knew exactly what they were doing. Take Marie Claire magazine, for example. Yesterday, photographer James Jollay posted articles to diyphotography.net and PetaPixel detailing his experience with a large-scale publisher who is certainly well-versed in usage rights and etiquette. The offense occurred two weeks ago and remained uncorrected, despite James’s Instagram callout at the time of his articles’ publication.

Jollay collaborated with the model featured in the image to highlight a rainbow dyed covertly into the underside of her hair. It’s an eye-catching shot, and it did not go unnoticed. The first brand to repost Jollay’s work (who also altered his image by boosting saturation) was Bumble & Bumble. Though they didn’t ask for permission to repost or alter his image, they at least did credit Jollay and the hair stylist responsible the style. The model, who Jollay states was a very active participant in conceptualizing the shoot and was credited on Jollay’s original post, was left out of the credits on Bumble & Bumble’s post.

Hidden rainbows ? are always a pleasant surprise, and we adore this one by @cosmarissa Beautifully captured by @jamesjollay

With Bumble & Bumble’s following, it’s not surprising that another set of eyes seeking content for an Instagram account would fall on Jollay’s photo. Marie Claire made a post of their own, which, interestingly appears to be the one from Jollay’s own account, not the one shared by Bumble & Bumble with increased saturation.

If that’s the case, it would mean that someone from Marie Claire took the time to visit either Jollay’s account or the hair stylist, @cosmarissa, who he had given permission to repost, saw the Instagram handles of all parties involved in the shoot, then took and reposted the photo while intentionally leaving out most of the credit.

Now, Marie Claire has one million followers, dwarfing Bumble & Bumble’s 201,000 and Jollay’s own (hopefully growing with this exposure) 300. Marie Claire credited Bumble & Bumble as well as the hairstylist, and one can only guess why they would neglect to mention the actual creator of the content they’d used.

What’s more, Jollay attempted to alert Marie Claire of their infraction on their post but was blocked from doing so. Instagram has a feature which will let any user block comments if they contain keywords that the user sets. Apparently, Marie Claire had set a filter to disallow comments calling them out on photo theft, making any claims of innocence on their part all the more implausible.

At this point, however, the post has been blown up with comments in Jollay’s defense, so they may have changed their filtration keywords to attempt to save face, or the successful commenters wording may bypass the filter.

[REWIND:] COPYRIGHT FOR PHOTOGRAPHERS | WHAT YOU SHOULD KNOW TO PROTECT YOURSELF

As of today, Marie Claire’s post is still live and they have finally added credit for Jollay, though it doesn’t speak well of them that they didn’t care to until they were made, justifiably, to look really, really bad to a wide audience. As per Instagram’s Terms Of Service, Marie Claire was definitely in violation:

“You represent and warrant that: (i) you own the Content posted by you on or through the Service or otherwise have the right to grant the rights and licenses set forth in these Terms of Use; (ii) the posting and use of your Content on or through the Service does not violate, misappropriate or infringe on the rights of any third party, including, without limitation, privacy rights, publicity rights, copyrights, trademark and/or other intellectual property rights; (iii) you agree to pay for all royalties, fees, and any other monies owed by reason of Content you post on or through the Service; and (iv) you have the legal right and capacity to enter into these Terms of Use in your jurisdiction.”

Cases like this, though usually on a smaller scale, are all too common. If this happens to you, aside from reaching out to the infringer, you Instagram has a form you can fill out, though its usefulness remains to be seen.