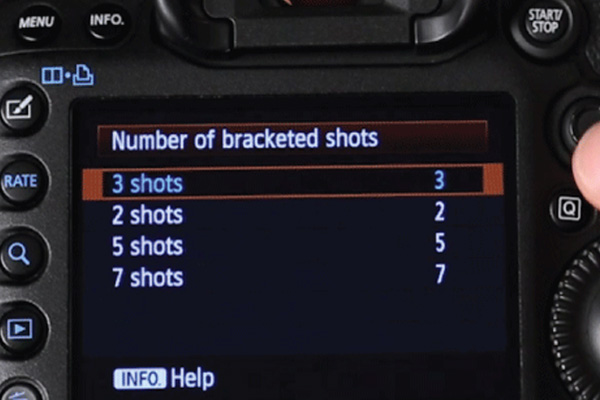 For more information on the exposure triangle in HDR Photography, we’ve also shared the optimal settings for aperture and ISO in separate articles.

The first issue we need to consider regarding shutter speed involves a limitation caused by the camera itself. The fastest shutter speed that most DSLRs can shoot at is only 1/8000th of a second.

If we were to shoot a 3 frame-3 stop bracketed sequence, the camera would not be able to shoot the darkest image in the sequence if we started the median exposure at 1/2000th of a second since 1/8000th of a second is the darkest the camera can go and 3 stops darker needs to be at 1/16000th of a second. This is why the optimal exposure value difference should be at two stops instead of at three stops. At three stops, you start to run into this shutter speed limitation. In addition, you will also run into motion issues, which we will discuss below.

The second issue that we run into with shutter speed is motion blur and ghosting, which are two different things.

However, you can also use motion blur to your advantage by creating motion effects in your image. For example, by using a slow shutter speed, you can make the water in your scene apear smooth and silky in your image. It’s worth noting that we cannot go beyond 30 seconds, unless we are using a shutter release, when going brighter in our bracketed sequences. For example, a median exposure set at 7.5 seconds with a 3-frame/2-stop exposure sequence will take us to 15 seconds at one stop brighter. At two stops brighter, we hit 30 seconds, which is the camera limitation.

Regardless of the median exposure, a 3-frame/3-stop bracketed sequence is not the best choice when shooting HDR photography.

If you’d like to dive deeper into HDR Photography, check out our HDR Photography Workshop. We designed the workshop to show you how to create beautiful and realistic high dynamic range photographs. Whether you’re a professional or an avid enthusiast, this 13-hour workshop will guide your journey from prep to post.