This is the ultimate beginner’s guide to photographing birds. Most of you know that I am a portrait photographer by profession, but I recently had a chance to go out and photograph birds for the first time in my entire life. My original purpose for going was to do a gear review of Tamron’s new 70-300mm lens, as well as the new Canon 600mm RF lens. I often see several birds on the bike trail when I go out for a ride, so I thought I’d go and photograph these birds with the Tamron & Canon lenses. During the process of creating content for the reviews, however, I learned quite a few things.

That said, let’s curb the Pye-losophy and jump into our first tip.

Let’s talk about starting with the right gear. Here’s a quick list of the gear used in this tutorial:

The first thing I’m going to say is the right lens will generally be a telephoto zoom lens, and I would recommend at least a minimum of 70-200mm. Honestly, if you can step to something like a 700-300mm, then check out Tamron’s 70-300mm f/4.5-6.3 variable aperture lens. It proved to be a fantastic lens. Another lens I played with was a fixed focal length lens, the new Canon 600mm RF with a fixed f/11 aperture. Whichever make or model you use, you’re going to want a long lens because you’ll be photographing the birds from a significant distance.

If you’re trying to decide between a fixed focal length lens vs. a zoom lens, consider the following. With a fixed focal length, you’re getting more distance (such as with the 600mm RF), but you’re also giving up compositional control. With the 70-300mm zoom lens, you get half the distance, but you also get a lot more compositional flexibility. It really comes down to what is more important to you.

Next, let’s talk briefly about the camera body. I would highly recommend using a mirrorless camera. The “why” is a topic for another video, but then I actually paired the 600mm RF with the EOS R, and it made for a decent combo. When I paired the 70-300mm with the a7III, however, I found Sony’s focus system to be noticeably better. Granted, I wasn’t using the R5 or the R6, which are Canon’s latest models, and I would imagine they have much better focus systems. I also think I might need to do a firmware update on my EOS R, but in general, Sony’s AF is widely regarded as superior, and you’ll see why when you go out to photograph birds and the like. If you were to use Canon’s R5 or R6 models, or if you were to go with Sony, or even Nikon’s mirrorless bodies with the Nikon Z5 or Nikon Z6, they’re all going to work well. Basically, you want a body that has solid autofocus capabilities and good low light performance.

With these lenses, you’re generally shooting at more closed-down apertures, which means even during midday, if you’re shooting fast moving subjects, then you’re going to need to raise your ISO quite a bit. With an f/11 lens, we’re shooting around ISO 400 or ISO 800, even with a bright sun overhead. On the Canon side, I would recommend pairing your lens up with an R5 or an R6. On the Sony side, the a7R series would probably be my preferred series for this type of photography. I say this mainly because the extra resolution that the a7R series provides gives me much more detail, which I can then use to crop into if necessary.

The only other thing that I would add about gear is to keep in mind how you typically shoot. For example, I like to ride around on my bike and I don’t much room for anything extra, so anything that I carry with me has to go in a small backpack. Therefore, having a single lens with a mirrorless body makes a very small footprint and allows me to also carry along my small camping chair.

Tip 2: When to Shoot 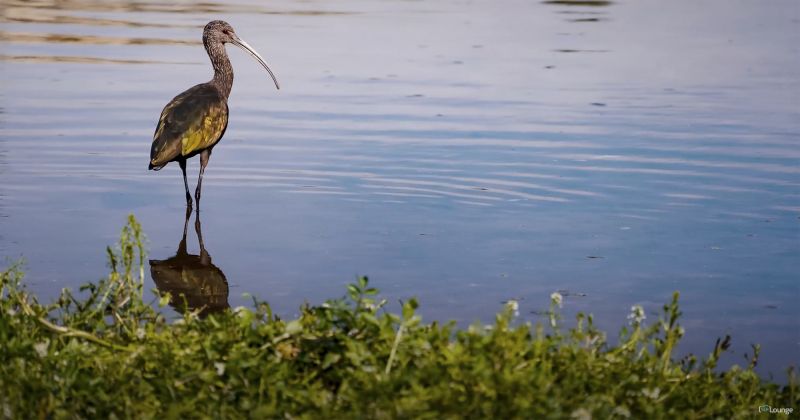 What is the ideal time of day to shoot? Typically, we would assume that shooting at either sunrise or sunset would give us ideal light direction and yield similar results. I have to be honest, though. I had much better luck shooting early in the morning, and I’ll explain why.

Sunrise worked out better for me for a couple reasons. First, I encountered far fewer people out and about. I chose to shoot around the Newport Back Bay area around 6-8 a.m. At sunset, it would’ve been crowded there. Everyone’s off work and they all want to go on a bike ride or a walk. As it turns out, more people generally translates to fewer birds, or else the birds stay farther away and become harder to photograph. Another reason I preferred sunrise was I found that I would often capture really nice atmospheric elements in my photographs, like fog and other environmental lighting that I liked, especially in the Back Bay area.

Once you get to the location, you’ll need to choose your background. The first thing that I consider when I see a grouping of birds is where I want to actually shoot from. I always try to look at my background when deciding on a shooting position. We want to clean up our backgrounds and make sure we’re shooting from an angle where the background looks good. A lot of the places I shoot at aren’t special spots, like alongside an aqueduct or with junk all around. What helps is choosing a good background.

Tip 4: How to Not Chase the Birds

I quickly found that trying to walk after birds doesn’t work, and I’m sure those of you that are more experienced at this than I am are laughing right now. As it turns out, chasing birds is not a good idea. Instead, what I found gave me great success was grabbing my tiny, portable camping chair and setting it up near a spot where I knew a lot of birds would congregate. From that spot, I would basically chill. Once you’re sitting and not moving, the birds tend to come really close. If you have bread crumbs or bird-safe food that you can throw, then, by all means, toss that. I found that the bread usually only brought the ducks towards me. The nicer birds that I wanted to photograph were not interested in bread, most likely because they eat worms and bugs and other things. Again, bird enthusiasts are probably laughing right now. That’s okay. I’m fine with that. 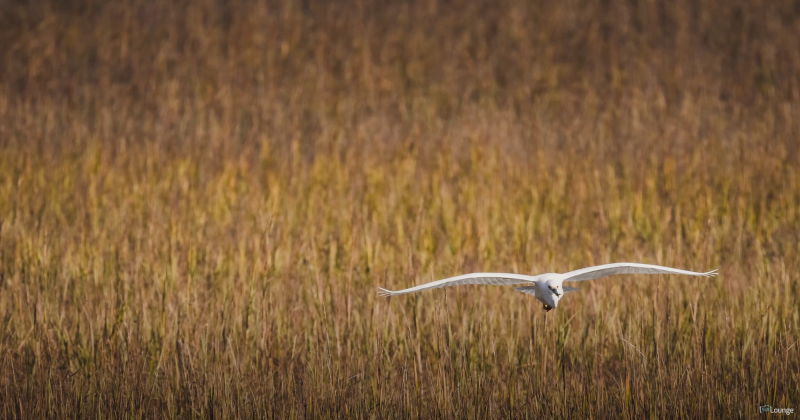 Next, let’s talk about camera settings.

Birds are obviously fast-moving subjects. Likewise, when photographing them, you’re going to need a fast shutter speed. I prefer shooting manual for everything, and that includes photographing birds. I set the camera to 1/2000th of a second, which I found it said in the bird photography communities is sort of a sweet spot for shutter speed. Why? Because the shutter speed is fast enough to freeze most of the action with minimal motion. You also get a little bit more light. You could take the shutter speed up to 1/8000th of a second, but then you’d get much less light. So, 1/2000th is a sweet spot in shutter speed where we can maximize detail and get enough light.

The aperture you choose will depend largely on the lens you use. I shot as wide open as the lens could go. On the Tamron, depending on how far zoomed in I was, the aperture varied. On the prime, with a fixed aperture of f/11, I shot wide open and simply adjusted my ISO to get a proper exposure.

1/2000th a second might seem excessive when photographing a group of birds that are holding still or slowly walking around. You could always slow your shutter speed to 1/500th 1/1000th for those moments, but I like to keep my shutter speed fast because one thing we need to do when photographing birds is anticipate motion. We’ll talk more about this below, but birds can very quickly get up and and fly, and you want to be able to photograph them when they do.

Tip 6: Keeping Up with Changes in Lighting Conditions 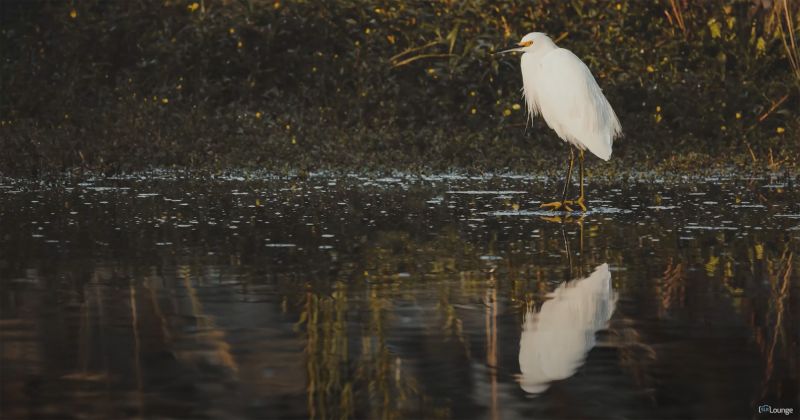 Make sure to keep an eye on your exposure as light changes. This happens quite a bit during sunrise and sunset, or even when the sun plays hide-and-seek with the clouds. It’s a simple but important tip. Make sure to watch your exposure. 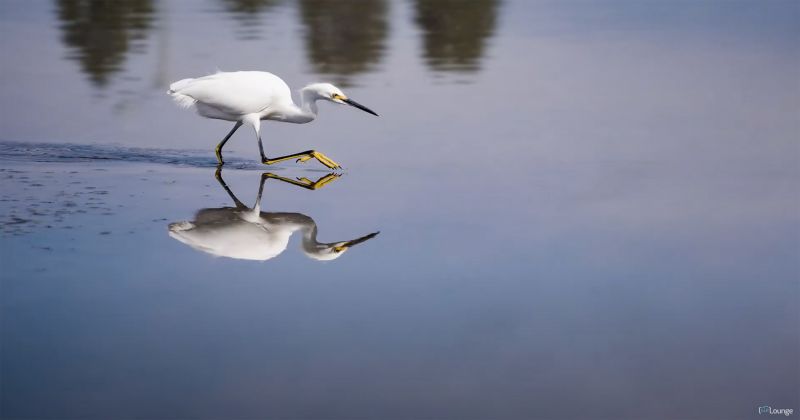 When it comes to composition, I recommend isolating your subjects. What worked well for me was trying to focus on one bird or one grouping. We already mentioned how important a clean background can be, so keep that in mind as you frame your shot as well. It’s very easy to shoot images that are just too cluttered, leaving the viewer wondering what to focus on. 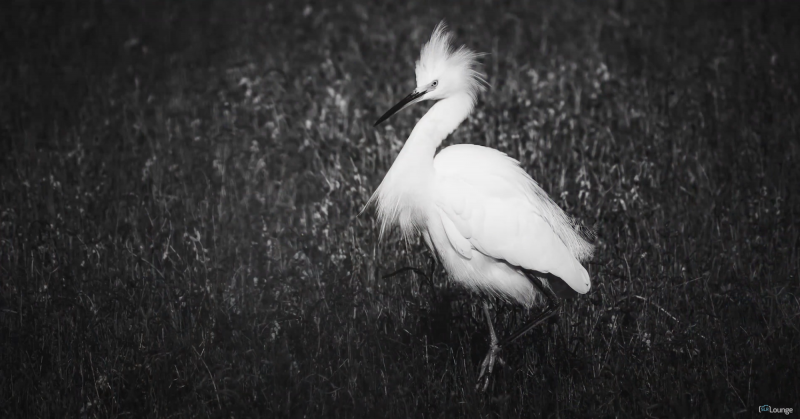 It’s imperative that you learn to anticipate movement. Now, I’m sure this takes years of practice to really get down. I only went out for a couple sessions, and it was difficult to do. Granted, even after two shoots, I started to recognize when the birds would fly in and where they would typically land, as well as when they’d get ready to take off or fight. One time, for example, a bird flew in, and I started capturing the action because he kind of came in hot, like these guys were in his territory. His feathers ruffled up and I got the shot (see the image above). I think it’s really cool because you can see all of his feathers standing up and there’s good detail in these photographs.

Another thing that I loved doing was watching the groupings, and when they would take off, I would sometimes be able to capture something like three birds all taking off at once and starting to go into flight. I would do the same for birds that would come in to land or else fly around the area. This is where keeping your shutter speed faster is going to be helpful because you don’t have to make any adjustments when they start flying and landing.

Tip 9: Learning the Names of Your Subjects

For my last and final bonus tip, learn the names of what the hell it is that you’re shooting. I took a lot of pictures of birds and I have no clue what they are called. So, if you can look through the images and tell me, I’d appreciated the help. I learned a few of them after the fact, but when talking to your bird photography friends, you’ll feel like an idiot when you can’t identify an egret, or you know, the Egyptian Goose.

I hope you all enjoyed this article/video. I know it’s a bit of a departure from our typical portrait-focused education, but as I mentioned up top, it’s important to challenge ourselves to try new things and expand our horizons. Here’s a quick recap of the tips covered in this beginner’s guide to bird photography:

If you’re interested in diving more into photography education, check out our photography workshops and Premium subscriptions at slrloungeworkshops.com.

Profoto B10 and the Ring of Fire

Canon and Sony Bringing Some "Super Sensors" To Market in 2021?