SLR Lounge > Camera Reviews and News > Steadicam Air 25 Monopod Review | Is It Worth $500? 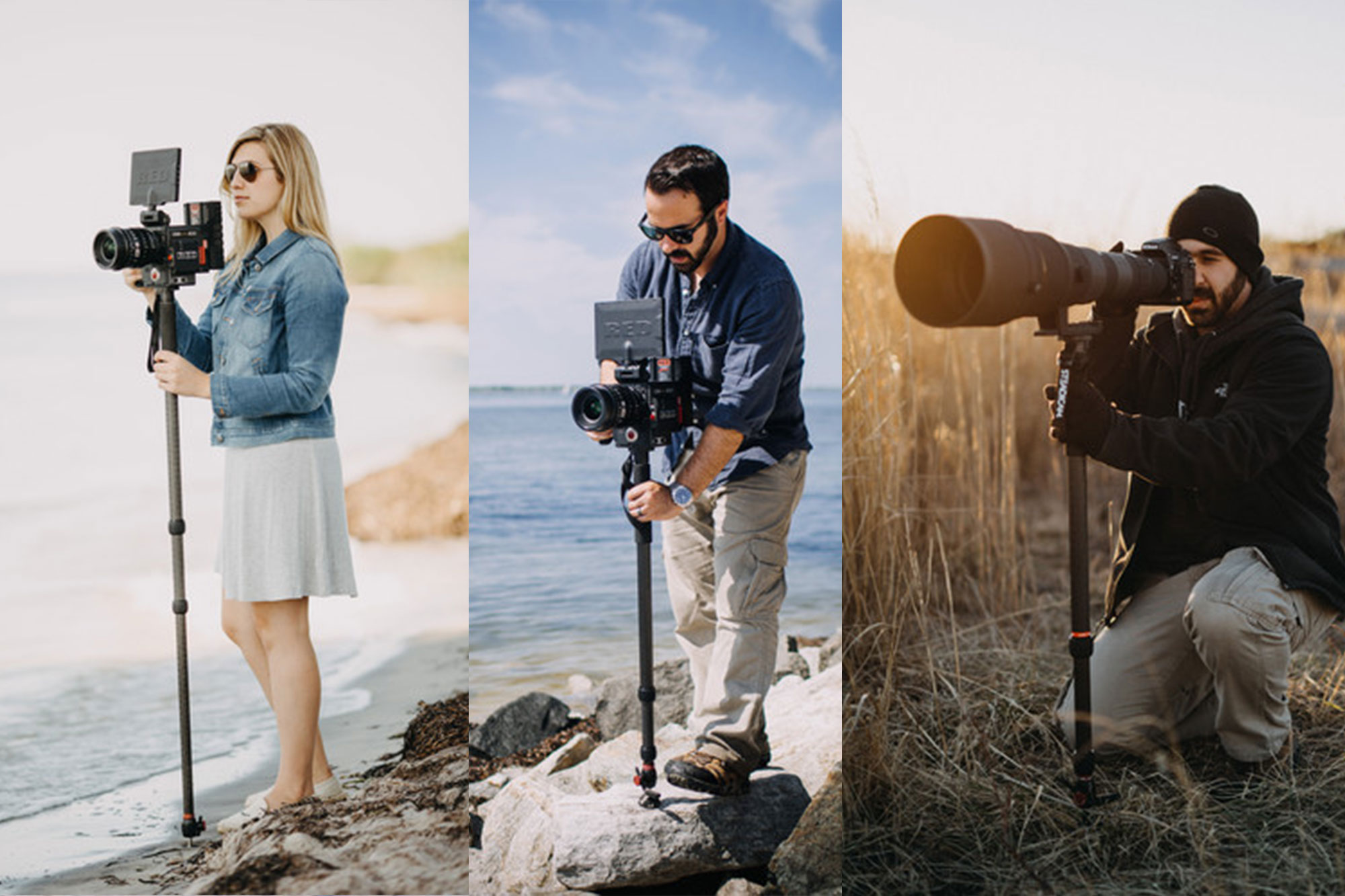 The market for monopods consists of both photographers and cinematographers with gear of all weights & sizes, looking for a sustainable solution for supporting their goods. There hasn’t been much innovation or versatility designed into monopods to truly revolutionize the tool for both photo & video…until now.

The Steadicam Air – the first monopod to have a 100% gas lift, spring activated height adjustment, setting it apart from it’s competitors in the monopod space. But is this one feature enough to justify a $500 price point? Let’s get into the finer details to see how it compares and if it truly is in its own class.

For those that don’t want to read an in-depth review, here are some quick pros & cons to consider before purchasing: 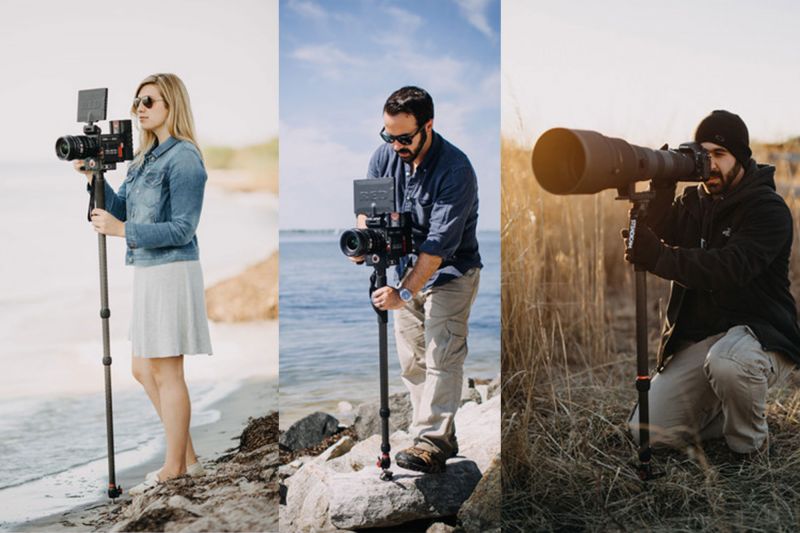 The most distinguishing feature of this monopod is the 100% gas lift, something never-before-seen in a monopod and quite honestly, ingenious. The adjustable legs also function differently than most top-selling monopods as they are twist grips, while most are clamps, which isn’t necessarily better by any means, just different based on preference. Another bonus design element is the removable aluminum top plate with reversible screw thread allowing for 1/4″-20 and 3/8″-16. 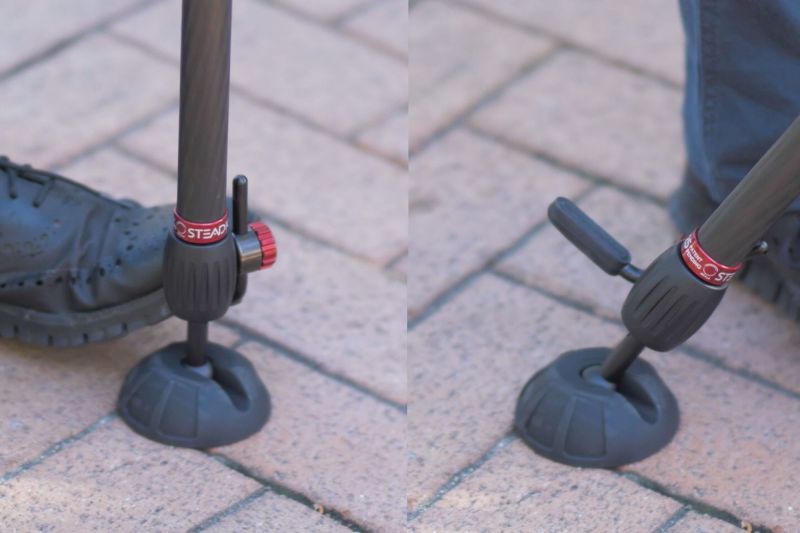 The actual leg-stand is composed of rubber to yield better grip rather than the trio of stand legs that you’ll see on competitors. The option to let your monopod stand on its own without constantly having to support it –even if it may be for just a few seconds– is a nicety most have gotten accustomed to. With the Air’s weight capacity at around 25 lbs, no one is going to be leaving their rig standing on its own, regardless, so this may not be a problem for those looking to solve the issue of finding a load bearing monopod.

We compared the new Steadicam Air to two different competitors: 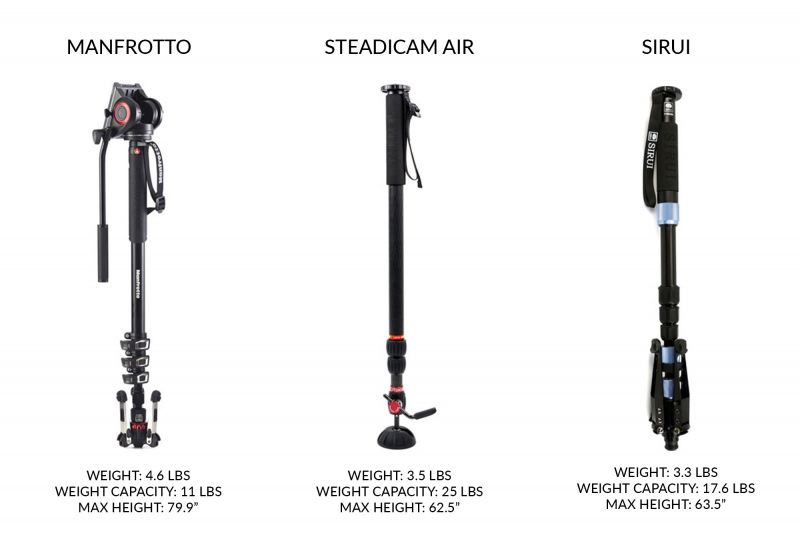 While it’s weight put the Air right in the middle of these two options, its weight capacity truly takes the cake being able to withstand 25 lb rigs, clarifying its place in this market for “professional image-makers to stabilize and support their equipment.” The Sirui has a 17.6 lb load capacity in comparison to the upcoming 15 lb Steadicam Air version available for pre-order, but the price difference between these two is ~$230.

It doesn’t quite match up when comparing max heights either, only able to extend to 62.5″ while Manfrotto quite literally towers above at 79.9″. While the red accents are refined & sleek and the carbon-fiber build is aesthetically notable, this price tag can’t be justified with the simple gas pedal lift and hefty load capacity.

What we have to take into consideration here is that Steadicam’s reputable position in this market and history of manufacturing undeniably robust products is truly why this product is in a class of its own. Advertised with RED cameras, the Steadicam Air is aimed towards professionals looking for a more efficient solution to their monopod needs, and in its press release, it claims it is

Why they are choosing to market this towards portrait photographers is a question that has arisen from first viewing of the promotional video:

It’s confusing. Contextually, I don’t really understand why a bride & groom would even be in the studio and why you would need a monopod for this setting. This definitely doesn’t do a great job in advertising that this is a 25 lb load-bearing beast, but we are all very aware how that gas pedal works now, so there’s that…

They are releasing a 15 lb weight capacity version later this year that comes in at $399.95, which is closer to the weight capacity class of the competitors mentioned in this article.

To put it to the test we took the Steadicam Air out for a quick test run during an event using the following two setups:

You can see that it produces high-quality footage with ideal stabilization and fluidity. The head allows for a 360-degree rotation without compromise and that definitely gives the user versatility.

If you are a “run-and-gun” type of shooter you might find that the gas pedal feature is actually a hindrance. Most cinematographers prefer to twist or snap their legs into place because you can complete this action easily while walking, but with the pedal, you need to place it on a flat surface to press down.

Breaking down the Air is a whole other issue if you have a “lighter” setup. In order to shorten the legs, you must press on the pedal and push down with a lot of force. I imagine with a heavier setup, the amount of force exerted decreases due to the weight, but why advertise it with smaller cameras and claim this is for wedding photographers?

The monopod stand was actually one of the notable features after putting the Air to use because of its flexibility, which is something most monopods don’t have. The ballpoint head helps the user tilt the camera to a much lower angle that isn’t possible with the Manfrotto or the Sirui because of the three stand legs. This video really demonstrates the fluidity that can be achieved compared to the restrictions of the competitors we’ve mentioned.

Is this the Monopod For you?

Are you better off buying a cheaper monopod like the ones we’ve tested this against? Possibly. Should you consider how much weight capacity you need your monopod to withstand before making this decision? Definitely. It’s extremely difficult to defend this price point (even with its revolutionary gas pedal feature), when its capabilities only slightly differ from its competitors. Keep in mind that its weight capacity is what is doing the talking here – Steadicam is aiming for this is to be used by pros wanting the security in knowing their gear can be supported and those are the consumers who need this tool.